A series of cross-country rallies for race-equipped CJ-3Bs? This was the annual "Jeep Cross" circuit, organized in Spain in the 1970's and 80's by Motor Iberica, parent company of Jeep manufacturer EBRO. The overall winning team took home the "Cup of Spain." 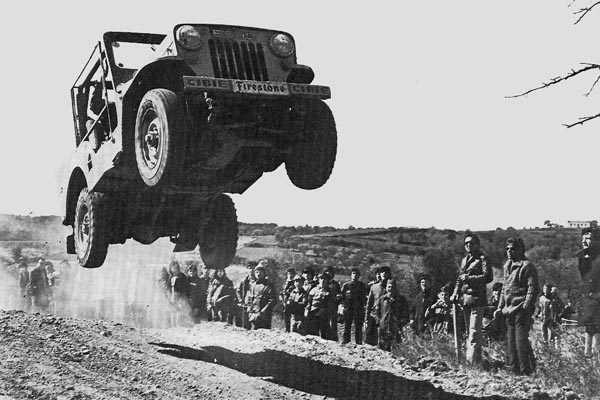 This photo was taken at the Gran Cross Rally of Catalunya in 1980, the year the Jeep Cross name was officially changed to "Gran Cross".

According to the full April 1980 report on the race in Spanish (250K JPEG), there were typically 16 to 20 Jeeps in a race. This one ran between Girona and La Bisbal, a distance of about 8km (5 miles) as the crow flies across the mountains, but the actual length of the course is not given. 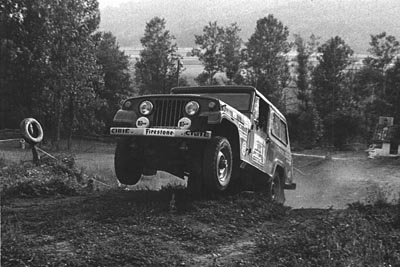 For the 1980 series the vehicles were split into two divisions based on engine size, because of the dominance of the EBRO Comandos over the CJ-3B Bravos the previous year. The Bravo was powered by the 65 HP Barreiros diesel (110K JPEG) while the Comandos got the 72 HP Perkins diesel (150K JPEG). 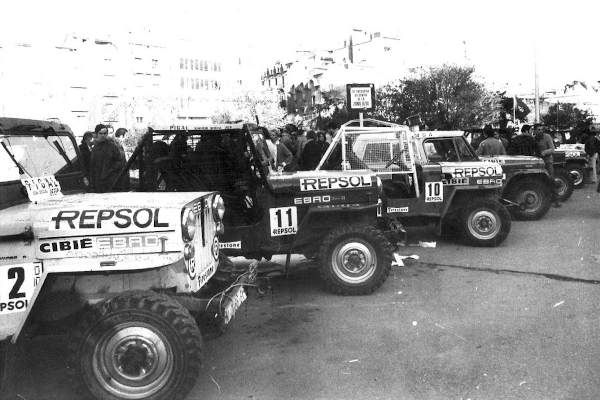 Along with EBRO, the huge oil and gas company Repsol was a principal sponsor of the Jeep Cross series. Most of the Jeeps lined up here at Girona advertise sponsorship by Repsol. 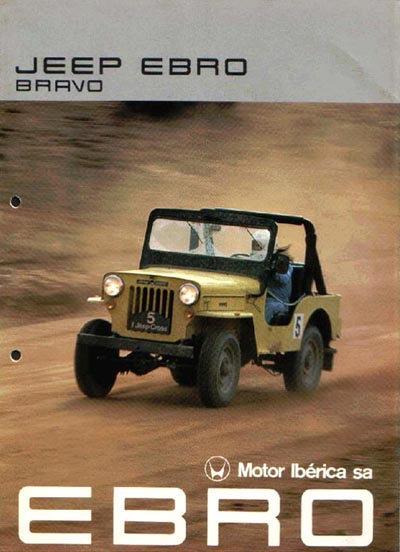 The cover photo on a 1970's EBRO brochure was taken at the first Jeep Cross race, and captures an Ebro Bravo marked as entry number 5 flying down a dirt road, and the driver's hair flying in the breeze. This photo became well-known after appearing in Auto Aventura magazine, and also becoming one of the first photos in "Jeeps Around the World" on CJ3B.info. 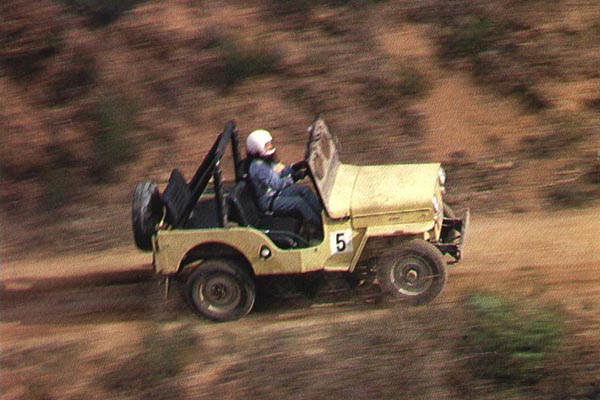 Jeep 5 had a roll bar, which was standard equipment for the Bravo, plus a lap belt and a little rope that could be clipped across each door opening!

The Bravo had the fuel tank under the passenger rather than the driver's seat, which may have helped the driver feel marginally safer.

The cover of a Jeep Cross rule book advertises the Copa de España or "Cup of Spain", as well as "Motor Iberica Grand Prize" and the "Repsol Trophy." Another sketch from the booklet (30K GIF) shows a Jeep carrying the Repsol name and logo on its bumper, hood and body.

Although the cover shows a driver in an apparently stock Jeep, restrained only by the lap belt, the diagram below of required and recommended safety equipment is from the same book. It requires bucket seats, shoulder harnesses, 6-point roll cage, fire extinguisher, tow hooks and mud flaps, and recommends safety mesh all around. 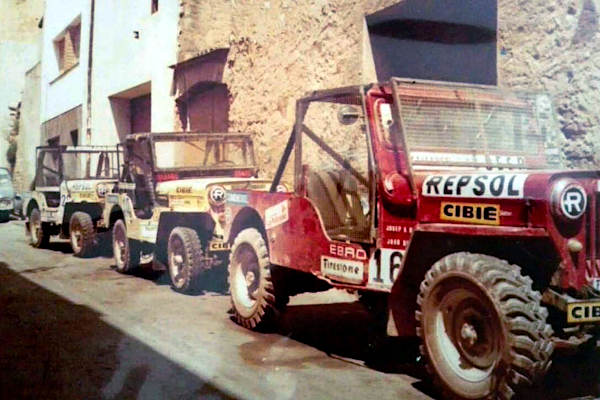 Jaime Gomis ran across this photo of some of the race Jeeps, date and location unknown. A couple of examples of the EBRO Bravo are in the background, behind a Bravo L with some big rubber, presumably Firestone judging from the sticker under the door. 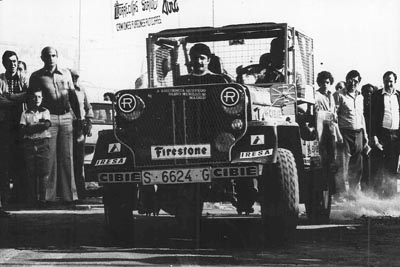 By the late 70s the competitors were all safety-equipped, and in many cases had removed the stock windshields.

This Bravo carries ads for a number of sponsors, including front mud flaps advertising Iresa, the Spanish company manufacturing exhaust manifolds and other aftermarket racing equipment. The date and location of this photo is unknown. 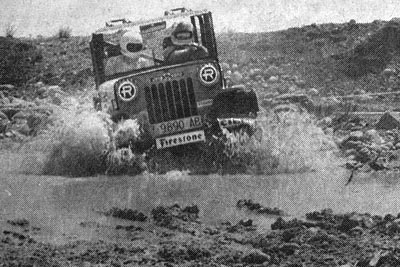 An October 1979 article (200K JPEG) from Velocidad magazine, described the results of the Jeep Cross of Aragon, held in Huesca. The text in Spanish reports a victory by the team of Prieto and Antón in an EBRO Comando, and a crash by favorites Juvanteny and Reixach in their Bravo CJ-3B.

It predicts an exciting final race of the series in Madrid in November 1979, since the winner of the 1979 Cup of Spain would not be decided until then. 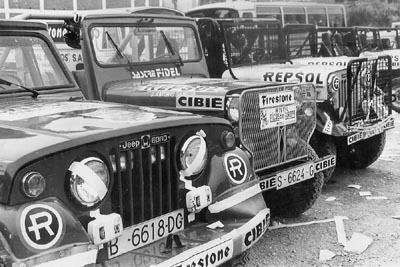 This photo found by Jaime Gomis shows an EBRO Comando and several CJ-3B Bravos prior to the race in Huesca, with full cages and some with the windshields replaced; these are pretty clearly full-time racing vehicles. 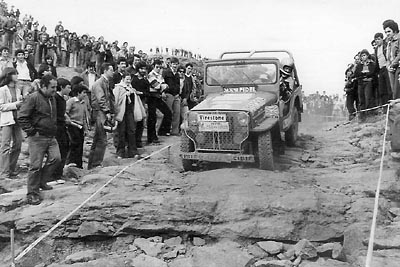 Another photo shows one of the same Jeeps in action, on a rocky section of the Huesca course in front of a big crowd enjoying the action. It does show why some drivers might prefer not to have the safety mesh enclosure.

Comparing this photo with one taken at the same location in the Velocidad article (200K JPEG) indicates they both date from 1979. Comparing it with another 1979 article (250K JPEG) confirms that this Bravo is driven by García and Sañudo 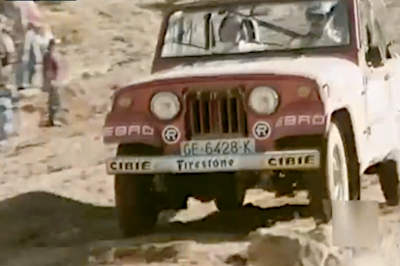 The final Castile Jeep Cross rally of 1979, at San Lorenzo de El Escorial, on Sunday, 25 November 1979 is the subject of one of a couple of Jeep Cross newsreels on YouTube. 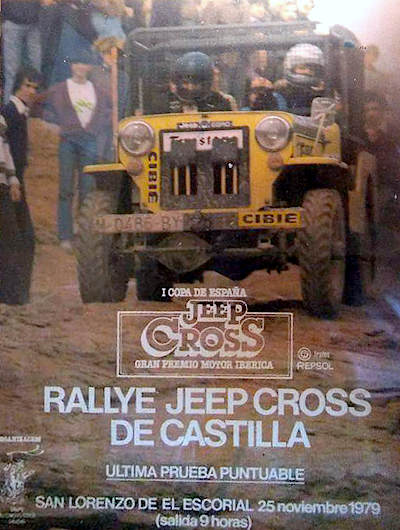 A poster for that 25 November 1979 race states that it was the ultima prueba puntuable or "last scoring test." The narration in the video confirms that Juvanteny and Reixach came back from their loss in the previous race, to win in the Bravo S of Team Andretti-Diez. 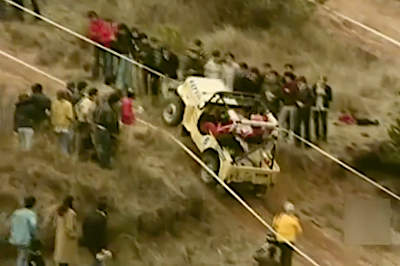 There is also video from an earlier 1979 Jeep Cross event held in Manresa, on YouTube. 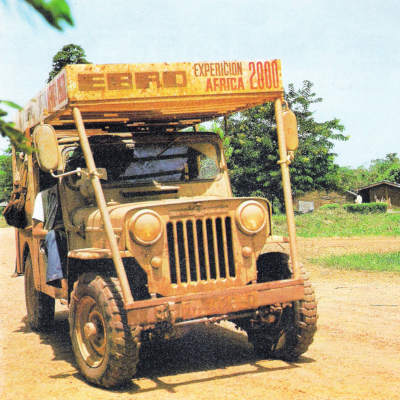 When EBRO entered a rally called "Expedición Africa 2000" they mounted some more aggressive tires. (Why this race was tagged "2000" is not clear, since the photo appeared in the same late-70's EBRO brochure.) 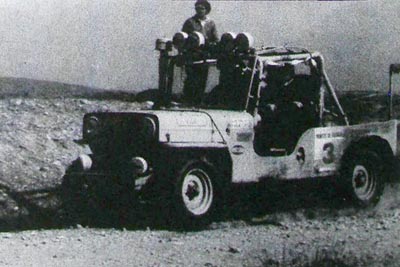 The Jeep Cross apparently disappeared when Nissan of Japan bought EBRO's parent company Motor Inerica in 1985, but this was not the end of off-road Jeep racing in Spain. This long-wheelbase Bravo L is seen in a 1985 article (200K JPEG) from the magazine Auto Sport Hebdo describing the "Todo Terreno Montes de Cuenca" (Cuenca Mountains All-Terrain) off-road rally which as of 2010 is still held, with a variety of specially-prepared vehicles.

Thanks to Josep Bordas, Jaime Gomis and Ricardo Suárez. Also to 1000 Lagos for clippings. -- Derek Redmond