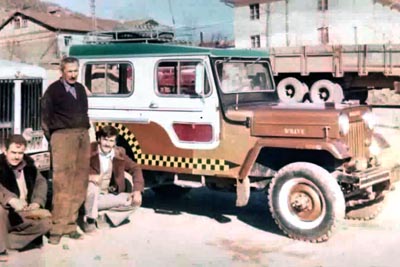 Sinan Nasirli sent this set of photos of a long-wheelbase CJ-3B taxi in Turkey. The use of Jeeps as taxis/minibuses was quite common in rural areas, and Sinan estimates that nearly half of the 3Bs in Turkey were lengthened. This one has also had dog ears added to the front fenders. 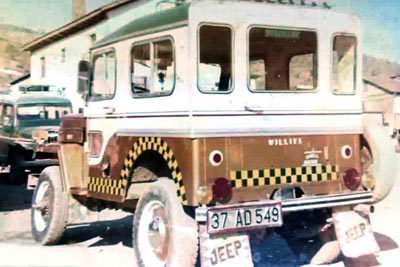 Many of the Jeeps are army surplus, but Sinan believes most were modified by their new owners, rather than by the military vehicle plant at Tuzla.

The prefix 37 on this license plate indicates it's in Kastamonu province in northern Turkey, on the Black Sea (see a map of Turkey, 270K JPEG). Funny how checkerboard and yellow seem to be universal taxi symbols. And funny how "Willys" was spelled wrong when the tailgate was replaced on this Jeep. 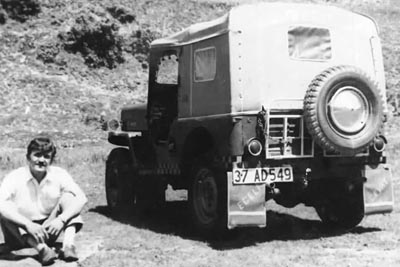 This snapshot shows the same Jeep prior to getting the stretch and the hardtop. But the checkerboard stripe indicates it was already being used as a taxi. Unfortunately we don't have dates for any of these photos, or the name of the owner posing with the Jeep. 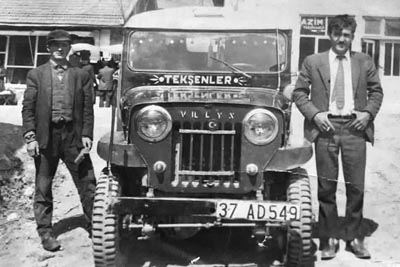 Here he is again -- possibly Tekşenler is his name. Here he has installed a hardtop and some front fender skirts, different from the later ones seen at the top of the page. And in the course of doing the body work on the front, there again seems to have been some difficulty with the Willys stamping. 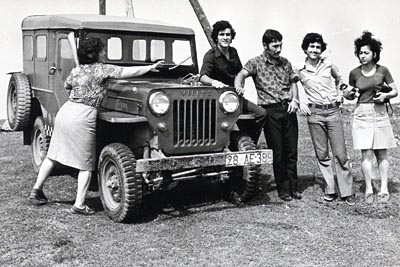 Another taxi, this one in the province of Giresun, also on the Black Sea (see the map of Turkey). Serhat Güvenç found this undated photo and says, "The checkered belt on the side of the body indicates that it was used to transport passengers (pretty much in Jeepney fashion) in the rugged terrain of that region. Also of interest is that its body was slightly stretched, probably locally, to accommodate more passengers."

This looks like a family photo, with the daughter holding a movie camera. 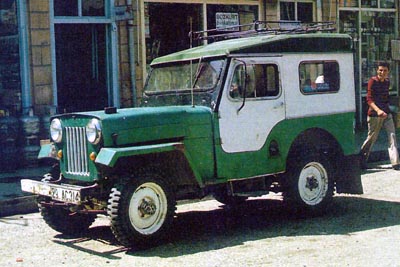 John Carroll photographed this long 3B, which also received dog-eared fenders, in neighboring Gümüşhane province. It doesn't have a yellow stripe, but the luggage rack on the roof suggests it may also be a taxi. 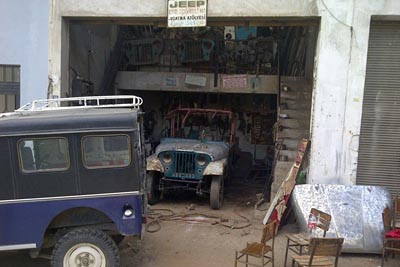 The modifications were often done in small, local Jeep garages, such as this one photographed by Hakki Babalik in Nazilli, in Aydın province, on the Aegean Sea in western Turkey (see the map of Turkey). The sign says "Jeep/Car Repair and Lengthening Workshop," with the name of the proprietor, Eyüp Selen. 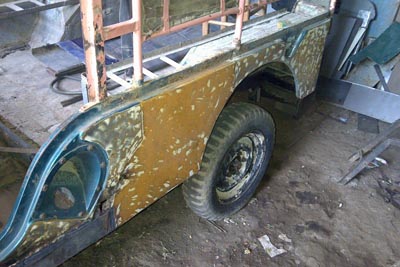 This work in progress shows a body side insert similar to what was used on the Willys CJ-6. 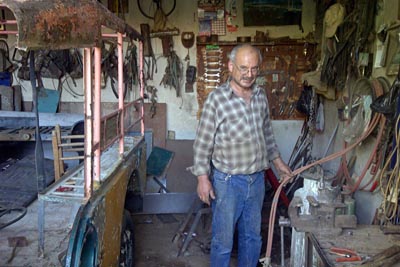 Eyüp Selen in his shop. He looks like the kind of guy who will do whatever is necessary.

According to Sinan, common modifications include changing 6-volt systems to 12 volts, installing Dodge brakes and Mercedes steering boxes, and swapping in diesel engines. 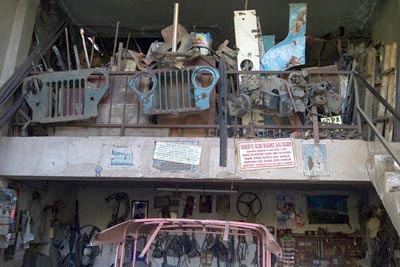 Eyüp has a parts attic, because import regulations have made it difficult to obtain Jeep parts. 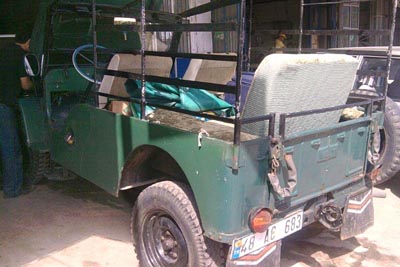 Sinan Nasirli bought this lengthened CJ-3B with a body panel insert (90K JPEG) on each side.

Although late 1950s Jeeps including CJ-5s were built at the Tuzla Jeep factory near Istanbul (see the map of Turkey), Sinan's 1953 CJ-3B was a Willys import prior to the opening of the plant by Türk Willys Overland. 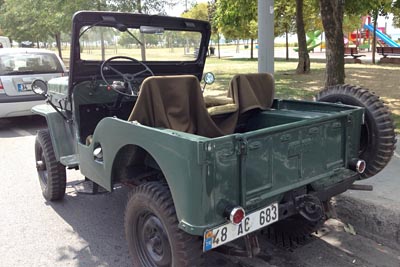 As part of the restoration of his Jeep, Sinan decided to return it to its original length. See also a front view (240K JPEG), and an electric wiper (90K JPEG) which Sinan says was typically installed by the Tuzla plant when the army returned the Jeeps for refurbishing and upgrades. 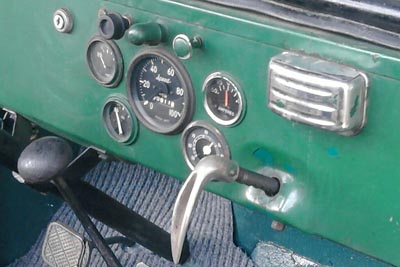 Sinan also mentions, "A funny thing -- many of the Jeeps here have an ashtray added to the dashboard, on top of the hand brake. It rotates, so that you can turn it upside down to empty it. I asked a few old Jeepers and they say this is also a later addition by owners. Probably some guy was adding them as they are really common." 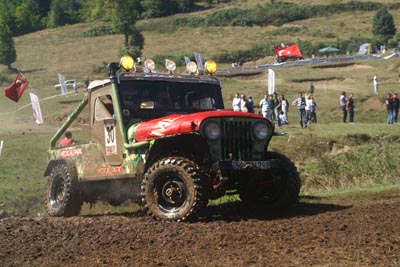 Taxis are not the only Jeeps that have been lengthened. Serhat Güvenç photographed some offroad racers near the Black Sea, including this CJ-5. In this case the stock fenders have been chopped off. 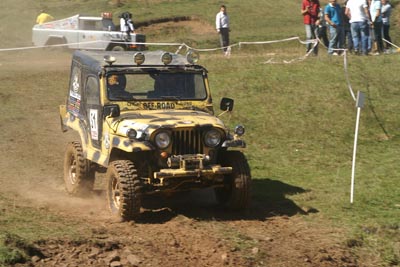 Another CJ-5 in competition has its fenders trimmed to flatfender dimensions, and its rear end bobtailed. 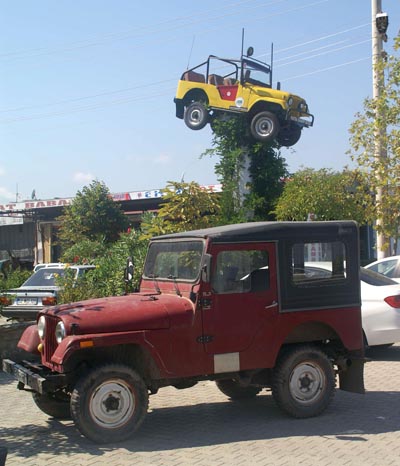 There are larger Jeep garages and off-road centers, including this one advertised by a CJ-5 on a pedestal. The red CJ-5 is a Tuzla-built example. 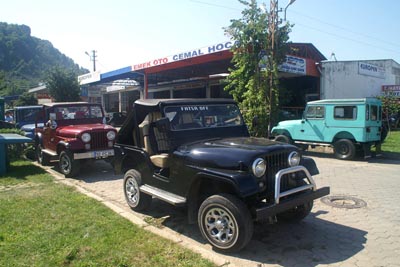 The sign over this shop reads "Auto Maintenance" but Jeeps are clearly a specialty.

Hardtops like the one on the Jeep in the background are popular in Turkey, with a variety of door configurations. Although Tuzla did not build long-wheelbase CJ-3Bs, there were factory-built CJ-6s as well as some that were lengthened later. 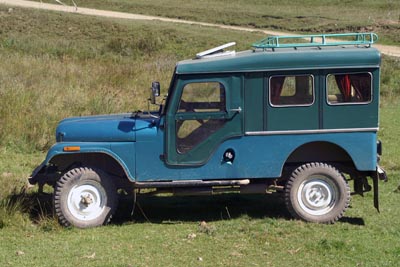 This example spotted by Serhat appears to be close to a standard CJ-6. The deluxe camper (or taxi) hardtop accomodates the soft doors. 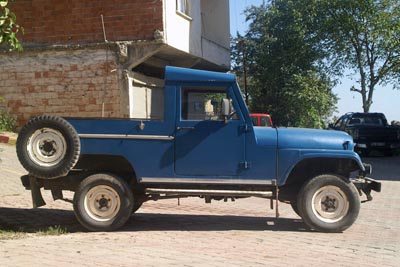 This pickup version has elements of both the CJ-6 and CJ-8, and was photographed by Serhat on a previous trip to the Black Sea in 2012. 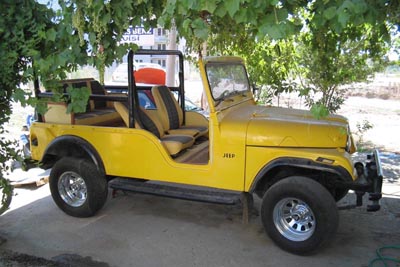 Even aftermarket bodywork is sometimes very nicely done. Zeki Tolu sent photos of his Jeep which has the VIN tag (70K JPEG) of a 1960 Willys CJ-5, but the length of a CJ-6 (and a rear gas tank.) See also the Hurricane engine (90K JPEG). 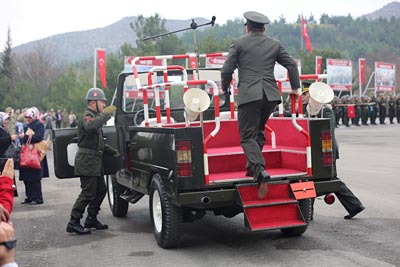 Serhat Güvenç watched an induction ceremony for new conscripts of the Turkish Army's 12th Infantry Training Brigade in Amasya (see the map of Turkey), on 28 February 2014. He took some new photos of an interesting Tuzla-built Jeep model, which has been seen before in Turkish Jeeps in Army Service. 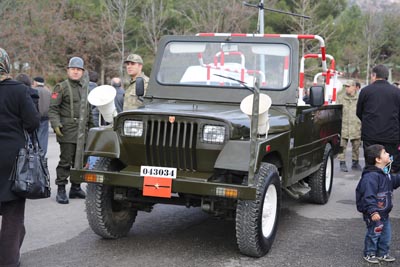 This parade truck has a 1980s-90s YJ Wrangler-style front end, with the exception of the parking lights being in the bumper rather than the grille panel, and the angular outer edge of the front fenders. 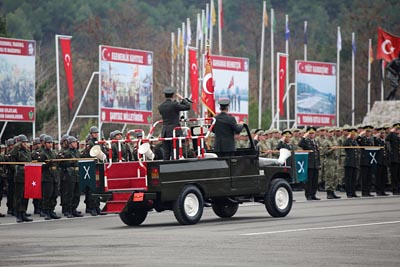 The Commanding Officer takes the salute in the PA-equipped Jeep. A quick look at the bodywork near the "Turbo Diesel" plate and "1013 TUZLA" stamping on the cowl (70K JPEG) suggests the body is handmade. Since the military's takeover of the Tuzla plant in 1972, it has been officially known as the "1013 Military Equipment Main Repair Factory." 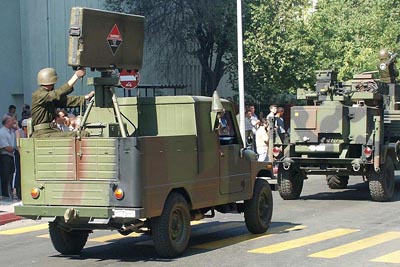 This example of the "T-model", as the long-wheelbase variant of the YJ built at Tuzla is known, is configured as an anti-tank unit. The photo was taken by Serhat in Corlu in 2003. There is also more on this unit in Turkish Jeeps in Army Service.


Thanks to Sinan Nasirli and Serhat Güvenç for the photos. -- Derek Redmond

See other Jeeps Around the World on CJ3B.info.