When the CJ-3B Was New

The scene above may be somewhat idealized, but it does evoke what life was like for many people in North America in the early 1950s. See a larger copy of the illustration (220K JPEG) which was originally one of a series of similar General Motors advertisements and appeared in LIFE magazine in 1953. The Jeep was added from a 1953 Willys ad. Some of the details worth noticing include the mechanic helping the little girl with her roller skates, the postman thinking about how a Jeep might be a nice vehicle for delivering mail, the groom getting ticketed for having an unsafe vehicle, and the only African-American in the picture, washing a car out back.

I don't know the actual date when the first CJ-3B (serial number 453GB2 10001) rolled off the Jeep assembly line (see On the Line in Toledo) but 1 August 1952 was the beginning of the 1953 model year for Willys. Some records show only 2,360 of the new Universal Jeeps built during 1952, so production may not have started until late in the year. But Glenn Houston remembers that Art Rodda already owned CJ-3B Number 9 in Oregon in August. I also have a report of serial number 18134 being exported to Brazil in 1952, which would mean over 8000 units built that year. By early 1953 they were certainly selling like hotcakes at Willys dealers across North America, as well as being exported.

Approximately 30,000 CJ-3Bs were built in 1953. The year was the 50th anniversary of Willys-Overland (and coincidentally of Ford Motor Co.) and also saw the biggest change in the corporate history of Willys, when it was bought in a friendly takeover by the industrial giant Kaiser-Frazer Corporation. Edgar Kaiser became president of the Willys Motors division. 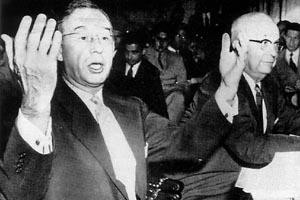 Willys was still losing money, and Kaiser would have to kill the new Aero-Willys passenger cars and start concentrating on Jeeps, before turning a profit in 1956. But Edgar Kaiser and his father Henry were used to dealing with big problems; in 1953 they appeared before a U.S. Senate committee (left) to defend the cost of the flying boxcar cargo planes they were building for the Air Force, in a futile attempt to prevent their contract from being cancelled. This photo appeared in LIFE magazine. 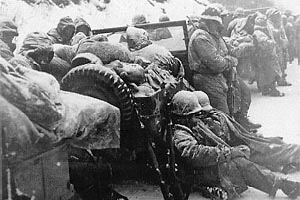 The Korean War had dragged on since 1950; this photo was taken in December 1950, and is courtesy of the Historical Branch USMC and Ray Walker. By 1953, the biggest issue for the U.S. public was the return of its POW's from North Korea. The detonation in November 1952 of "Mike" the first hydrogen bomb, and the death of Soviet leader Joseph Stalin in March 1953, were two factors leading to the Korean armistice finally being signed in July.

Julius and Ethel Rosenberg were executed in the electric chair for spying, on 19 June 1953. Senator Joseph McCarthy continued his efforts to expose communists in the U.S. government, and President Truman decided not to run for reelection in 1952. Republican Dwight Eisenhower defeated Adlai Stevenson and was inaugurated in January 1953 with Richard Nixon as Vice-President. Great Britain also had a new head of state, as King George VI died in February 1952 and Queen Elizabeth II was crowned in June 1953. 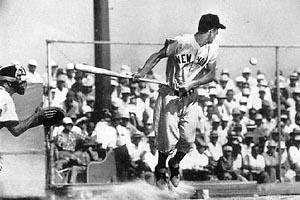 The New York Yankees under manager Casey Stengel won the 1952 World Series, beating the Brooklyn Dodgers 4 games to 3. In 1953 they did it again 4-2 for a record fifth straight year, led by second baseman Billy Martin (seen here in LIFE magazine at spring training) who hit .500. Young Mickey Mantle fanned four times in Game 3 as Brooklyn pitcher Carl Erskine pitched a Series record 14 strikeouts, but Mantle was clearly a big star of the future. 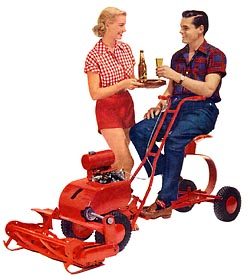 As well as baseball, summertime pursuits included cutting the grass. Interestingly, the power lawn mower has a history which parallels that of the Jeep. It had been invented in 1940, became a commercial success in the postwar period, and reached perfection with a high-hood model (seen here in an ad for Blatz beer) in 1952. 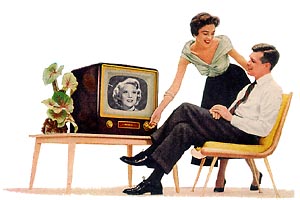 Most television would continue to be black & white for another decade. Popular TV shows included I've Got a Secret, The Lone Ranger, The Burns and Allen Show, Art Linkletter's House Party, Arthur Godfrey Time, Howdy Doody, The Adventures of Ozzie and Harriet, Dragnet and of course The Roy Rogers Show.

Many movies were still black & white too. The big winner at the 1953 Oscars was From Here to Eternity, set against the background of World War II. Ancient historical epics like Julius Caesar (also in black & white) with Marlon Brando, and The Robe (in CinemaScope and Technicolor) with Richard Burton, were also very popular at the movies. 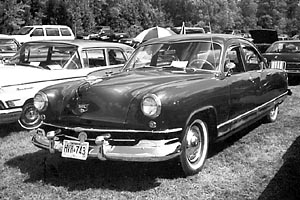 Automotive highlights of the early fifties included the very stylish Kaisers. The design which first appeared in 1951 (see the '51 Kaiser Deluxe at left) had a rakish 52-degree slope on the windshield, and a total of over 3500 square inches of glass. It handled beautifully, and perhaps if there had been a V8 to provide sufficient power, it could have been the vehicle to save Henry Kaiser's passenger car business.

Instead, Henry and Edgar looked to the Universal Jeep, which would do very well for them over the next two decades. And for 1953-54 the proud flagship of that Universal Jeep line would be the little high-hood CJ-3B.

For another Kaiser classic, the Darrin Roadster, see What Henry Kaiser Gave Up to Make Jeeps.

Return to CJ3B's in History.