The Parkway Plant From the Air

The Jeep plant at the corner of Jeep Parkway and Central Avenue in Toldeo, Ohio (see an area map, 60K GIF) was the oldest operating automobile factory in the United States when it was largely demolished in 2002 (see Willys Factory Demolition on CJ3B.info.) 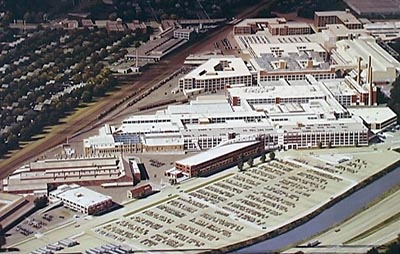 The view at left is a large painting done in 1995 after the sale to Chrysler. The painting was hung in the Jeep House Museum, the small building with a red tile roof in the foreground of the picture. (See more about the museum in On the Trail of Jeep History on CJ3B.info.) Since the demolition of the Jeep House, the painting has likely been moved to a spot at the new Jeep plant up the highway, or perhaps in DaimlerChrysler's archives.

This view has the new main plant entrance in the foreground, with the employee parking lot covering the spot where the Willys-Overland administration building had stood until 1979. In the distant background are the remaining buildings of the original Willys-Overland factory which faced south onto Central Avenue.

A 1970's aerial photo (80K JPEG) from the Jeep House collection shows a very similar view, but with the administration building still standing in the foreground.

On this page I've collected a number of aerial views of the Parkway Plant from different points in time. Now that the buildings are gone, I hope this will be a step toward encouraging research on their history. I know that people including Todd Paisley and Keith Buckley are working to locate and preserve documents relating to the plant, as part of the complete Jeep story. Many of the photos here come from the Images in Time collection at the Toledo Lucas County Public Library, and some from Willys publications. Click any photo to open a large copy. 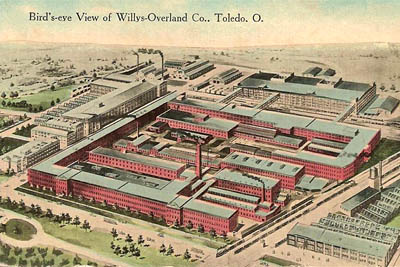 Ron Szymanski, former curator of the Jeep House Museum, estimates there were 23,000 employees at the plant during the teens, when it was the second-largest producer of automobiles in the United States. It was clearly more on the edge of Toledo than it is today, although there were already other industrial buildings in the area, including Warner Manufacturing across the railway tracks on the right, and Kinsey Manufacturing across Yost Street on the left. This postcard appears to be a hand-colored version of a lithograph (130K JPEG) in the Toledo Library collection. 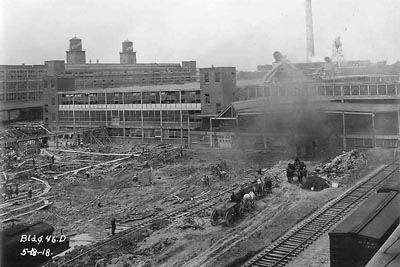 Not exactly an aerial photo, but an overview of the excavation for Building 46D, one of the steps in expanding the plant beyond what is seen in the lithograph above. The east end of Building 46A, seen here with the two square towers at its corners, is in the top right corner of the lithograph.

The date was 18 May, 1918, and a month later the steel for the second floor (150K JPEG) was up. Many of the multi-story buildings were built with plank floors which allowed the buildings to be re-configured, and contributed to the long productive life of the plant. 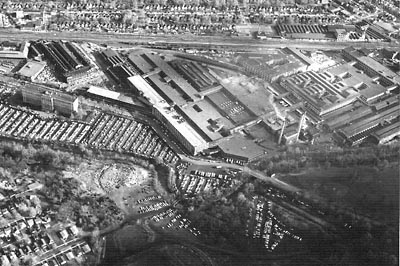 By 1936 the plant had expanded well beyond the original quadrangle (right) with the addition of the new administration building (left) and several large buildings (center) including the distinctive Y-shaped complex of Buildings 107 and 110, where the Willys jeep would later go into production. Building 89, which extends out from the top of the "Y" near the top left of the photo, was in fact a small factory built in the 1890's which was purchased as part of Willys' expansion.

Willys-Overland survived some financial difficulties in the mid-1930's partly by selling off some of the buildings on Central Avenue, which is perhaps why they are omitted from the right side of this photo. But the employee parking lot is packed, with some cars spilling onto the grassy area across the Ottawa River. 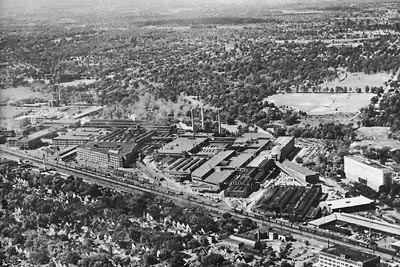 This photo, used in Willys publications in the late 1940's, appears to have been taken shortly after the war. This angle provides a look at the opposite side of Building 89, as well as the adjacent Building 105 -- the former Mather bedspring factory, for which the Jeep House was originally the office building. It's the dark roof next to the Michigan Southern Railway, near the bottom right of the photo.

The jeep went into production during World War II, but the plant was also used for the manufacture of 155mm shells, landing gear and center wing sections for the F4-U Corsair, and the airframe for the JB-2, a V-1-type weapon referred to here as the "Robomb" (180K JPEG) that was to be used for the invasion of Japan. The plan at right shows the distribution of these departments, with jeep assembly in the long buildings (89, 90, 107 and 110) at the north end.

According to a 1944 W-O phone book, here is a more detailed list of what was going on in some of the buildings during WWII. (Building 46 is labelled "155mm Shell/Landing Gear" in the middle of the plan. Building 52 is off the plan to the right.) 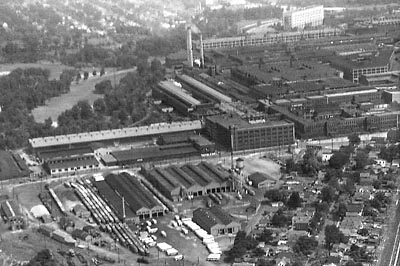 This shot by Charles A. Byers has the bus and trolley barns of Community Traction in the foreground, and Willys-Overland beyond. It's listed in the Images in Time collection as circa 1950, but the estimated dates in the collection are not always reliable.

Two other photos in the library collection from perhaps the same year if not the same day, are looking north (120K JPEG) and looking west (90K JPEG). The employee parking lot is empty, so the pictures may have been taken on a Sunday. 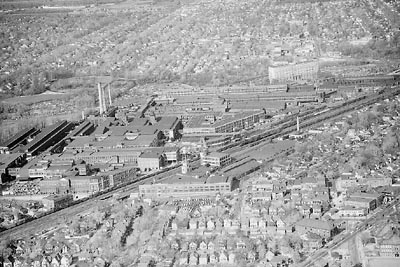 The large version of this photo (280K JPEG) is larger and more detailed than many of the other reproductions from the Images in Time collection. The photographer is not credited, but may be Willys photographer Milton Zink. A similar photo looking east (270K JPEG) taken by Norman C. Hauger in 1957, is also large and detailed. It's interesting to have these excellent images from the 1950s, a period that was certainly one of the most exciting in Jeep history, when so many new models were being designed, tested and produced.

Both photos reveal that a section of the building fronting on Central Avenue, originally built by Pope Toledo in the 1880's (and seen in the foreground of the lithograph at the top of this page) has become a parking lot. It was one of the buildings sold by Willys in the 1930's.

More of the older buildings at the south end of the plant, as well as the administration building, were gone by the time this plan was drawn in the American Motors period; some buildings were destroyed by fire in the 1970's. Since the war, Jeep production had of course expanded into the older parts of the plant. Building 49 for example held the Grand Wagoneer body shop, and later some body work for the Wrangler. Building 45 did the main body work, Building 108 was the forge and later the new paint shop, and Building 33 was the press shop.

Thanks to Todd Paisley and Ron Szymanski, and to the Toledo Lucas County Public Library and MapQuest.com. -- Derek Redmond

Return to Building Jeeps at The Parkway Plant on CJ3B.info.