Sixty years ago we were possibly at the peak of what we think of as the rosy but insular "fifties," when the problems of the World Wars and Korea were in the past, and the fact that not everybody had the civil right to participate in this happy society was not yet a concern to most people. The Cold War and the Space Race were in the back of people's minds, but mostly we could just enjoy our cars and our transistor radios and our prosperity.

Here's a look back at some of the things that were happening and some of the music we were listening to, in 1957. 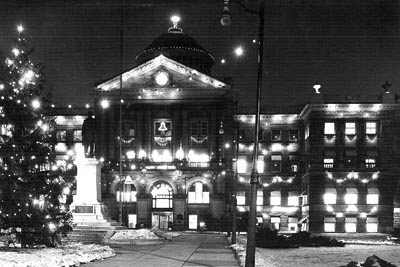 In Toledo, home of the Willys Jeep factory, there had been a few inches of snow early in December, so the Lucas County Courthouse (right) was looking like there might be a white Christmas.(1) But during the week before Christmas, temperatures went up to 57°F (14°C), very close to a record.(2)

Many Toledo residents were probably just as happy that they wouldn't have to deal with snow in December. 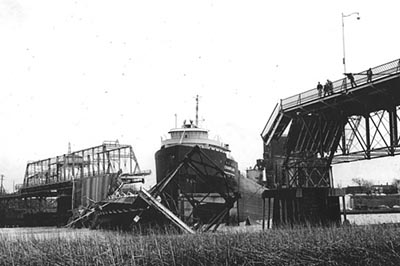 Back in April 1957 they had gone through the worst spring snowstorm in Ohio history, which had dumped 10 inches on the Glass City.(3)

That storm stuck in people's minds because it came just after one of the most memorable accidents in the history of the Port of Toledo, when the 8,700-ton lake freighter Champlain broke her moorings in heavy winds, and rammed into the Fassett Street Bridge over the Maumee River on 5 April, causing traffic chaos.(4) Then a couple of days later, the snow downed electric lines and closed schools. 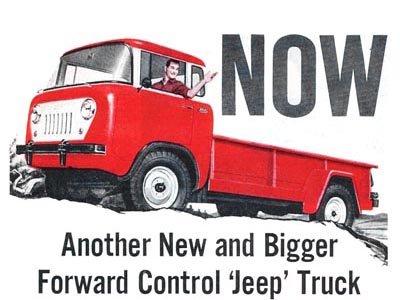 There wasn't a lot changing in the Willys Jeep line in 1957 -- the only thing new was the FC-170, as the company tried to kick start some interest in their Forward Control cab-over-engine trucks by adding a longer, wider model in the early spring. 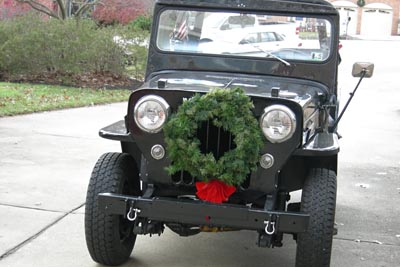 Workers at the plant on Stickney Avenue had started building CJ-3Bs for the 1958 model year, in August 1957. For the first few months it was pretty much the same as the year before, turning out an average of maybe 20 high hood Jeeps per day, which were shipped to dealers around the U.S. or increasingly exported to various countries. Serial number 57348 41740 was one of the first built that summer, and was sold in Florida. It now belongs to Peirce Eichelberger. (See also Peirce's 1958 CJ-3B at the Jeep Shows.) 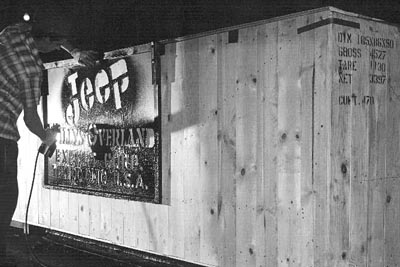 But in the fall of 1957 the incorporation of Willys Motors Australia led to a huge demand for Jeeps from downunder. Starting in December, over a thousand CJ-3Bs were shipped to Australia, roughly one out of every three produced over the winter and spring, which is why 58s are hard to find in the northern hemisphere 60 years later! They were sent unassembled, with three wooden crates holding the necessary parts for six vehicles. Many additional parts were added to the right-hand-drive Jeeps at the plant in Brisbane, Australia. 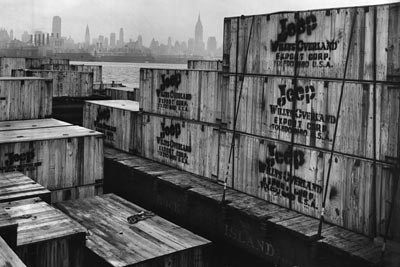 Since the St. Lawrence Seaway was not yet completed, the crates could not be sent by ship directly from the Port of Toledo, but were shipped by rail to a port such as New York, seen here from the Jersey shore.(5) December 2017 is the 60th anniversary of the loading of 96 crates into the hold of the 460-foot cargo ship Pioneer Star, carrying the first 192 CJ-3Bs to Brisbane. Sounds like a big load, but in fact the crates filled only a fraction of the ship's 426,000 cubic feet of cargo space. 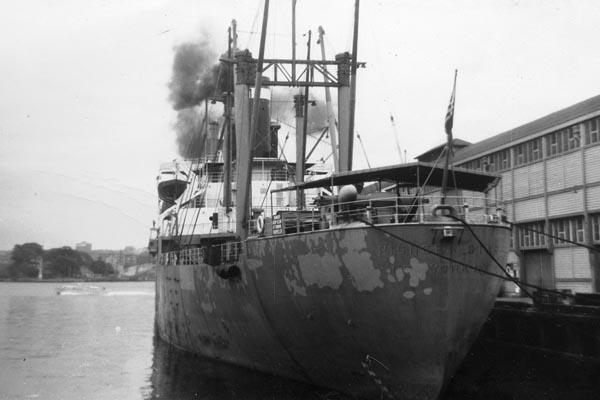 This photo of the Pioneer Star was taken in Australia.(6) A close look (140K JPEG) at the stern shows the ship was registered in New York. Built in North Carolina as part of the WWII war effort, and originally christened Defender, she was completed late in 1945, then bought and renamed by United States Lines for its Pacific service. After 25 years on the water, the Pioneer Star was scrapped in 1970.(7) 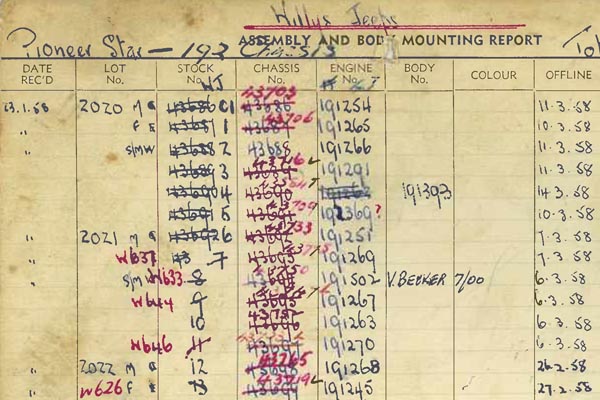 Here's an excerpt from the first page (250K JPEG) of the CJ-3B assembly records from Willys Australia. They were handwritten by an employee named John Miller, who was known to employees at the Willys plant in Brisbane as the "Screaming Skull." He had not a hair on his head, and refused to use the intercom to call staff or give instructions. Instead he would bellow out his office door, and staff at the other end of the building would hear him. But Parts Manager Barry Massey, who saved these lists when Willys Australia closed in 1974, says Mr. Miller knew his stuff.

Thanks to Mitch Holland for scanning the sheets, and Miran Hunziker for archiving them for the Willys Australia Facebook group. (Note: as of 2018 all of those sheets of Willys Australia Serial Numbers are available on CJ3B.info.)

The beginning of the first page (above) shows how the list is organized by Lot Numbers (crates of six Jeeps) which arrived at Building 27 starting on 13 January 1958. Serial number revisions on the first 89 Jeeps assembled are possibly due to Willys Australia installing bodies with serial number plates that didn't match the stamped numbers on the frames. 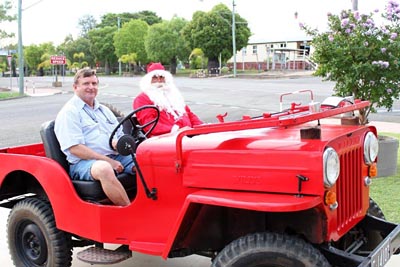 Vaughn Becker owns one of the Jeeps from the second crate that was opened, but there is no frame number visible to confirm whether it matches his data plates (130K JPEG). Vaughn sent us this picture taken by Caroline Bunker at Christmas 2014, as he delivered Santa to the Town Hall in Taroom, Queensland.

Oh yes, in case anyone forgot -- Christmas is summertime in Australia, so no fear of a white Christmas there. 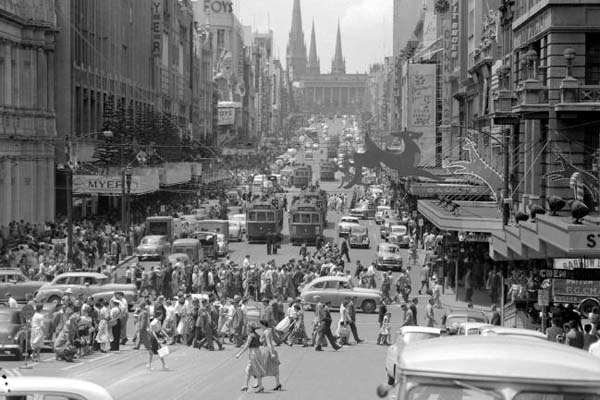 Short sleeve Christmas shopping in Melbourne, Australia in 1957. The cars were still looking pretty postwar, compared to the tailfins sprouting all over North America by then, including Omaha, Nebraska (90K JPEG).

And the Australian hit parade was similarly hesitant to embrace the latest trend in popular music -- rock 'n' roll. On 22 December, Paul Anka's "Diana" took over the #1 spot from Bing Crosby's "Around the World".(8) 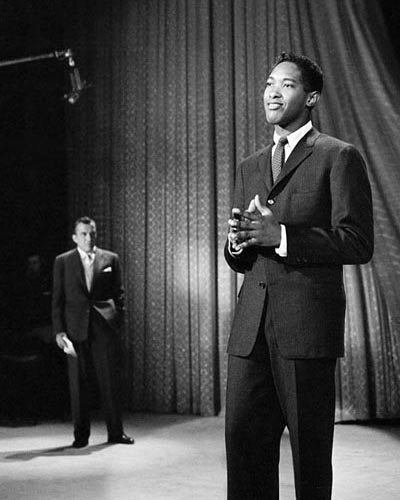 Back in New York, the Billboard Top Ten for 23 December was packed with songs which would become classics of rock 'n' roll:

On the first Sunday in December, the Ed Sullivan Show featured two of the artists in the Top Ten -- Sam Cooke (right) (9) and Buddy Holly and the Crickets. Sullivan had agreed to reschedule Sam Cooke for this week after he was cut off while singing "You Send Me" at the end of a November show. Sullivan explained that applause for other acts ran overtime, and that two appearances by an Italian tumbling act were more important for the show's format than a longer slot for Cooke.(10) 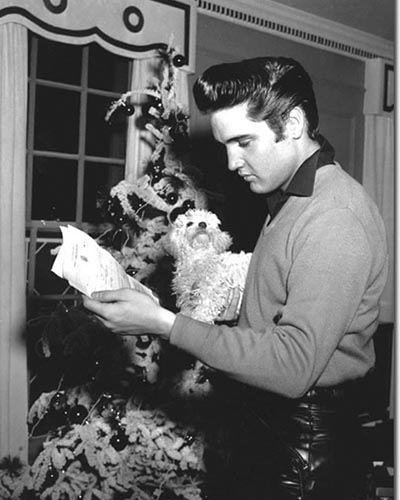 The biggest news in the entertainment business in 1957 came on 20 December when Elvis Presley received notice in Memphis that he had been drafted into the U.S. Army. (In hindsight, a more important event had occurred in Liverpool, England on 6 July, when teenagers John Lennon and Paul McCartney met at a dance in a church hall.)

Elvis was photographed at his Graceland residence with his mother's poodle "Duke." (11) His military service would continue to be news for the next two years, and his job as a Jeep driver led to his purchase of a Jeep after his discharge. (See Elvis Presley's Jeeps on CJ3B.info.) But outside Graceland at Christmas 1957 it was mostly Cadillacs (100K JPEG), plus a 1956 Lincoln Mark II.

The third Elvis movie Jailhouse Rock was in theaters, and the title song had recently been Number 1 on the pop, country and rhythm & blues charts. His fourth LP, Elvis' Christmas Album, had just hit the top of the Billboard "Best Selling Pop LPs" chart. 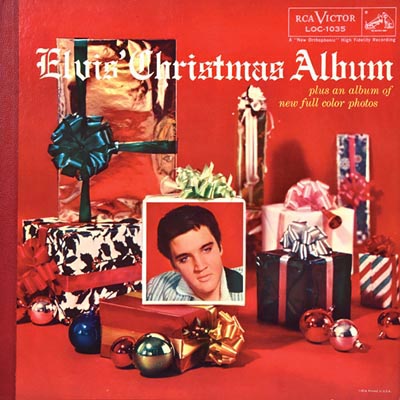 Many people, including composer Irving Berlin, were outraged by Elvis' version of "White Christmas" on the Christmas album, and tried to have it banned from radio.

On 2 December, radio station KEX in Portland, Oregon announced that it had fired disc jockey Al Priddy because he played the song on the air. Station Manager Mel Bailey said the station had banned the record because "it is not in the good taste we ascribe to Christmas music. Presley gives it a rhythm and blues interpretation. It doesn't seem to me to be in keeping with the intent of the song."

Complaints started to roll in, and within two weeks Priddy was back on the air. Decades later it was revealed that the whole thing had been planned as a publicity stunt.(12) 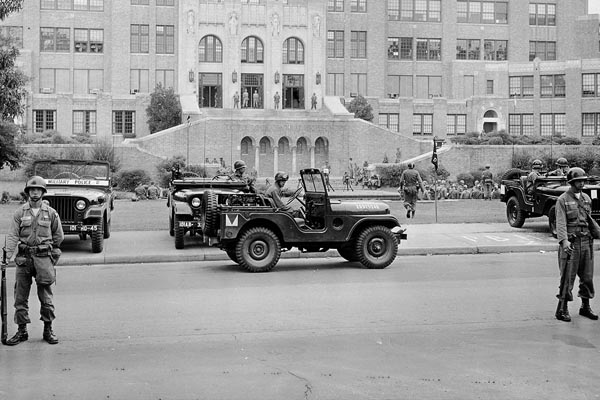 Elvis' recording of "White Christmas" was not the only version of the song that got people upset in December 1957.

Back in September, nine African-American students had been forced to withdraw from Central High School in Little Rock because of white segregationist protesters. After Arkansas Gov. Orval Faubus called out the National Guard to prevent the nine from entering the school, President Eisenhower sent units of the 327th Infantry, 101st Airborne Division, to escort the students and hold back unruly crowds.(13)

Then, in December rumors spread that the principal had forbidden students to sing "White Christmas" after a black student complained. School officials denied the rumors.(14) 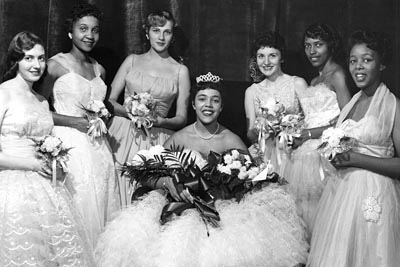 Toledo was way out in front of that kind of incident, which would be repeated in other states. Scott High School in Toledo elected Janet Quinn, an African-American student, as football queen in November. This was possibly a first for any large, integrated high school in the United States, and her election generated some controversy and racist reaction, but in the end the coronation and Thanksgiving football game went off without a hitch.(15) 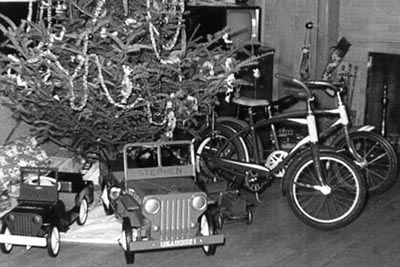 When Christmas morning rolled around, two of the most exciting presents Santa Claus could have brought from the North Pole in 1957 would be a bicycle or a pedal car. This family had four young boys, and their Christmas tree looked like a parking garage. The pedal-drive Jeeps were personalized for the two youngest, Stephen and David.(16) 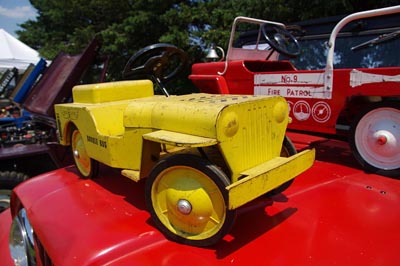 The larger Jeep under the tree is a Hamilton US Air Force model, and the smaller one is a toddler-size pedal car by Structo, with a built-in booster seat. A similar pair is seen on display at the 2012 Great Willys Picnic in this photo by Jacy Marquette. 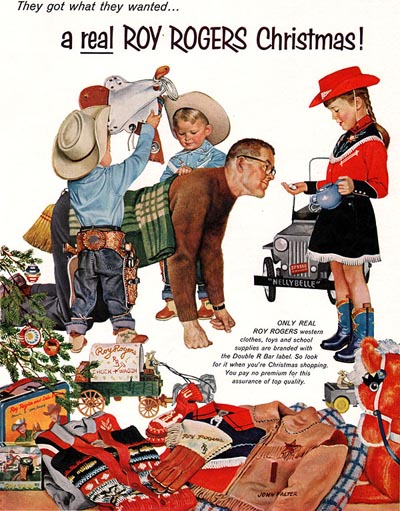 Still being advertised for Christmas 1957 was the Roy Rogers merchandise from various manufacturers of toys and clothing, despite the fact that the NBC-TV show had gone off the air in June that year. And again, the ultimate Roy Rogers toy was maybe the Nellybelle pedal Jeep, seen in the background here.

This ad was painted by John Falter, who did a lot of advertising art including recruiting posters as a Navy artist in World War II, but who was most famous for painting 129 storytelling covers for the Saturday Evening Post from 1943 to 1971 (including a Jeep with a Christmas tree on its roof in December 1946.)(17)

All the kids who found a pedal-drive Jeep under the tree were probably happy if it wasn't a white Christmas, so they could head outside for a spin around the block.

Return to Christmas Over the Years on CJ3B.info.