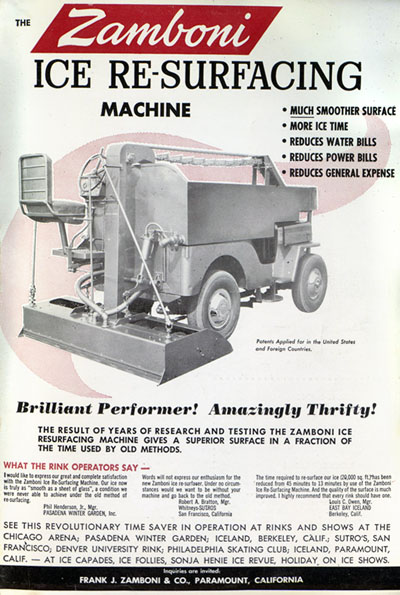 Frank J. Zamboni built his first ice re-surfacing machine in California in the late 1940's. The machine was designed to scrape a thin layer of snow off the top of an ice rink, and cover it with a thin coating of water. As demand grew, the machines were built in the early 1950s on top of complete Jeeps, then from 1956-64 on a stripped Jeep chassis, increasing water- and snow-carrying capacity.

This advertisement probably dates from 1953; it shows an early Model D, built on a CJ-3B. It gives a fairly short list of rinks where the machines were in use, but notably includes several touring ice shows such as the "Ice Capades," which gave the Zamboni® machines valuable exposure at rinks across the continent. 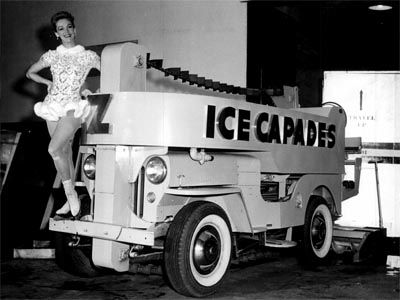 Donna Atwood was the "Sweetheart of the Ice" with the Ice Capades for 15 years until she retired in 1956 at the peak of her fame, to raise a family. But the life of a skating star wasn't all glamour; there were band-aids on the knees and requests to pose with the new Zamboni®.

I think this photo shows the delivery of a Model E to the Ice Capades in 1954 -- after they had successfully used a Model B machine for two years, driven by Bob Skrak who also skated in the show. (Photo from Eric Dregni's book Zamboni: The Coolest Machines on Ice.) 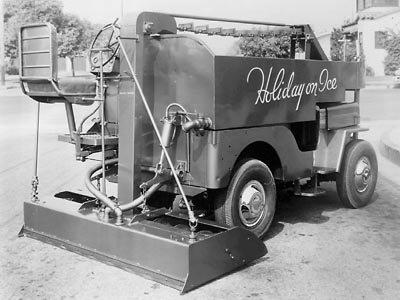 Zamboni® No. 12 (the first Model D, 1953) was built for "Holiday On Ice," a touring show originally developed in Toldeo, Ohio in 1943. Note the use of tires with minimum tread, and the stock driver's seat and steering wheel moved to the upper rear driving position. The lettering on the side was airbrushed away when this photo was used in the advertisement above. 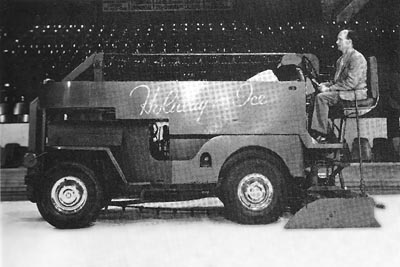 I don't think I had seen a Zamboni® in any Willys promotional material until Harry van den Bergh found this photo in a Willys-Overland Export Corp. publication in Europe. It appears to be the same "Holiday on Ice" Model D, but the text (200K JPEG) does not include the Zamboni name.

A drawing from Frank Zamboni's U.S. Patent 2642679, filed in 1949 and issued in 1953, essentially shows his Model A prototype mechanism with its wooden tank. But for the first time it would be mounted on "automotive vehicles such as the small, four-wheel drive vehicles formerly used in the military services and known popularly as the jeep."

Frank realized he needed four-wheel drive, but not the four-wheel steering of the original Model A, so the Jeep was a perfect platform.

Supplementary U.S. Patent 2763939, filed in 1952 and granted in 1956, featured improvements in the blade support and water spreader.

The drawings showed the Model B, which had already been sold to ice shows, including the Sonja Henie Ice Revue in 1950 and the Ice Capades in 1952. 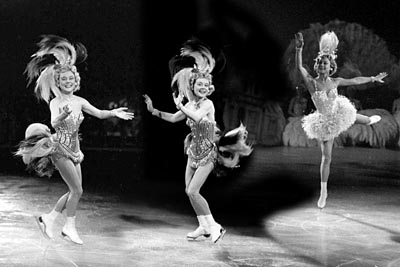 Norwegian skater Sonja Henie had won three Olympics and ten world championships in the 1920s and 30s, and then became a Hollywood star. Her Revue was still the biggest attraction on ice when LIFE magazine photographer John Dominis took photos of her in Houston in January 1952, for an article in the 4 February 1952 issue comparing Sonja with younger Canadian star Barbara Ann Scott, who had won the 1948 Olympic title.

Composite photo by CJ3B.info from photos in the LIFE archive at TIME.com. 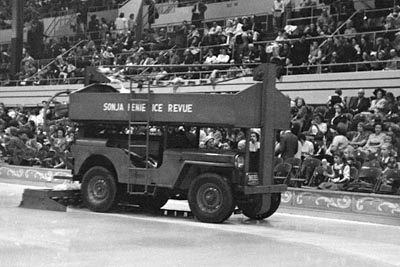 Sonja's CJ-3A-powered Model B Zamboni® was itself quite a crowd pleaser at the time, because of its novelty, and the LIFE photographer got a picture of it. It's the only Zamboni® Jeep I've seen with a ladder welded to the side step.

The first seven of the 1952-53 Model C (50K JPEG) machines were also built on a CJ-3A, but with a larger tank for collecting the snow scraped off the rink, and an elevated driver's seat for improved visibility. 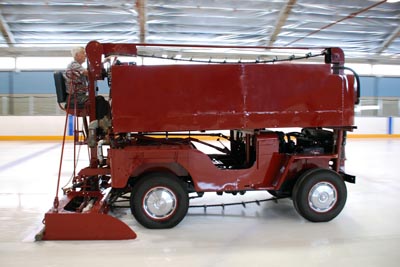 Zamboni's first use of the CJ-3B has been thought to have coincided with the debut of the Model D, but in fact Zamboni® No. 11, delivered to the University of Denver in 1953, was the last Model C, and was mounted on a CJ-3B with the hood removed to enable access to the engine.

After its retirement, the unique No. 11 was purchased by the company, and restored in 2013 to its original DU red. 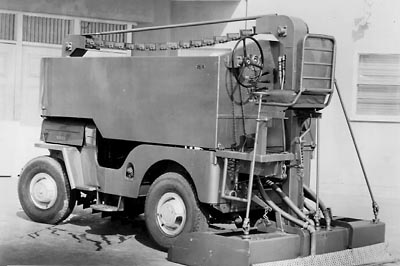 A method of opening the hood was apparently devised for the Model D. The bottom of the tank included a step down to increase capacity, permitting larger rinks to be resurfaced in a single session. This rear view photo shows other details of the mechanism, including the extended steering linkage.

Each individual machine built in the Paramount, California shop had improvements over the previous one, as they progressed from Model A (1949) through Model D (1953). 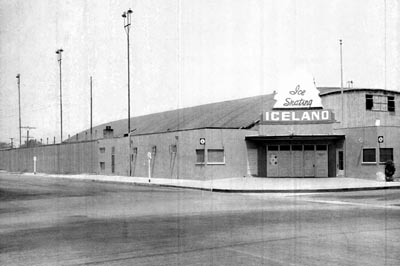 The Iceland skating rink in Paramount was built by Frank Zamboni and his brother Lawrence in 1939, and is seen here in the early 1950s. The "factory" photos above and below were both taken just outside the front doors of the rink. Still in operation as of 2015, Paramount Iceland is where new Zamboni® models have always been tested, and a couple of early units restored by the company are on display there. 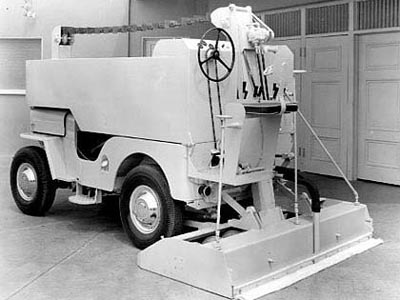 The Model E was the first "standardized" Zamboni® model and the last to be built on a complete Jeep; over 20 were manufactured during 1954-55, including some using a CJ-5 Jeep. Subsequent models were built on a stripped Jeep chassis, and since 1964 on a custom chassis. 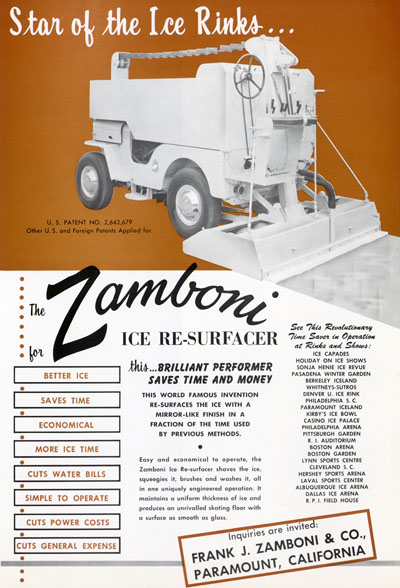 When the Model E photo (above) appeared in a new advertisement (right), the company was also able to provide a much longer list of arenas across the continent using the Zamboni®, including the Laval Sports Center in Quebec City, Canada. (In fact, by this point Sonja Henie also had one of her two Model B units on tour in Europe.)

There was no denying that the machine was a faster, better and cheaper way of resurfacing the ice, compared to an army of people with scrapers and squeegees. And Zamboni® could finally announce that they had been granted U.S. Patent 2,642,679. 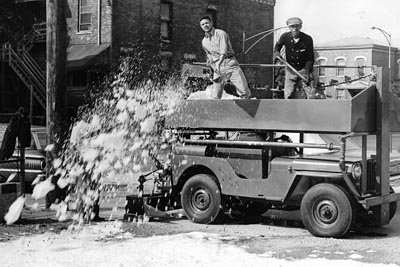 There was also a busy market in used machines, and many of them stayed in service for decades. As one wag put it, "Old Zambonis don't die, they just keep resurfacing."

This Model B was photographed as the snow was being removed, reportedly at the Chicago Blackhawks' stadium in 1963. (Photo courtesy Stephen Smith at Puckstruck.) 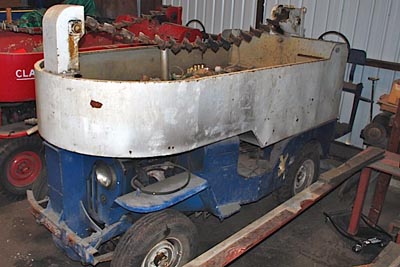 Model E-26 had originally been sold in August 1954 to the Hershey PA Sports Arena, as listed in the ad above. It was re-sold when the arena upgraded to a later model, and ended up in Atlantic City NJ, from where the Zamboni® Company acquired it on trade in 2001. As of 2017 it is in storage in Paramount, awaiting future restoration by the company. Elsewhere on the web, see an article about the Hershey Zamboni.

It appears that some facilities found it was more convenient to simply leave the hood off in regular use. 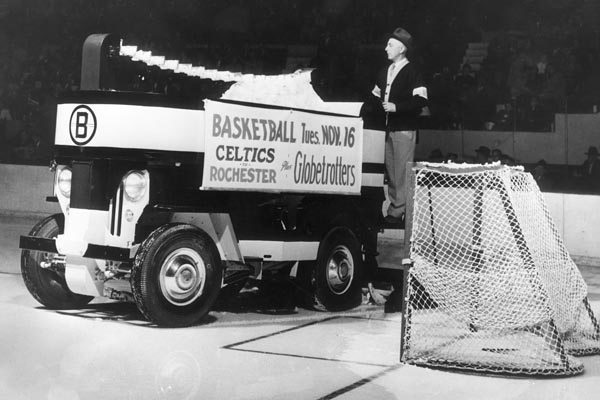 Lelo Grasso, who drove Boston Garden Arena's Model F machine for many years, was famous for waving his hat to the Boston Bruins fans as he departed the ice. Zamboni® later restored this machine, and it was donated to the National Hockey League Hall of Fame in Toronto.

Frank J. Zamboni died in 1987, shortly after receiving an Honorary Doctorate of Engineering from Clarkson University in Potsdam, NY.

By the way, Zamboni® has another thing in common with Jeep® -- they are both registered names for an original, unique vehicle. Their manufacturers are justly proud of the names, and want to make sure that people don't forget that they are the originals and start using those names as generic terms for other similar vehicles.

Thanks to Federico Cavedo for photo research, and the staff at Frank J. Zamboni® & Co., Inc. for permission to use photos. For more on the company, see Zamboni.com. -- Derek Redmond