CJ-3Bs at the Mud Races

Lots of CJ-3B owners get their Jeeps dirty working or playing off-road, but when it comes time to take a photo, often the Jeep is all cleaned up and standing proudly in the driveway. So there are always people who would like to see more photos of Jeeps in the mud. 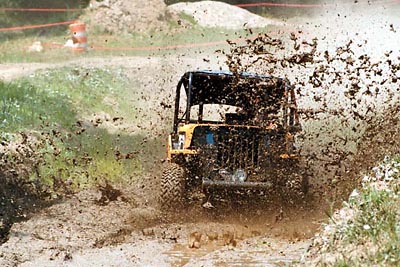 Is this enough mud for you? 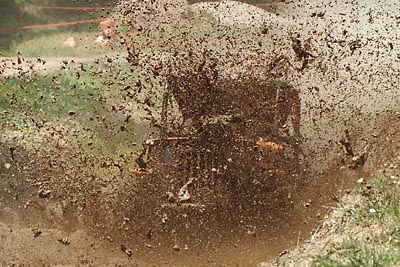 No? How about this?

These 1999 pictures from Bob Christy show Sean Ford hitting the mud bog on the obstacle course, while racing his 1953 (or '54) CJ-3B at the Jeep Races at the Tri-County 4 Wheelers races in Lisbon, Ohio. Sean calls his Jeep "Bits & Pieces", and it's powered by an F-head engine, stock except for a .050 shaved head, a 2-barrel carb and an electronic ignition from a Pontiac V8. Sean's 3B came in second in the overall eliminator, against a V8-powered Jeep. 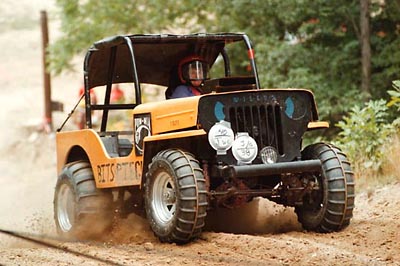 Here's what Bits & Pieces looked like in when it was clean, revealing a POW-MIA reminder on the side, and an ornery expression on the front. This photo shows Sean pulling the hill climb at Lisbon.

Gerald Oswald took a photo of Another Bad 3B (70K JPEG) around 1980 at the mud races in Lisbon. 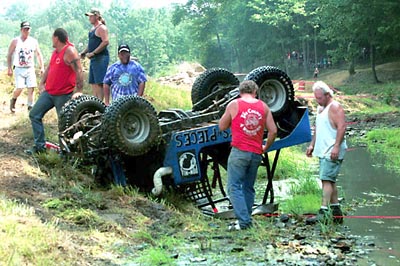 July 2002: Sean Ford is back in Lisbon and rolls his 3B on the obstacle course. Bits & Pieces is blue now. 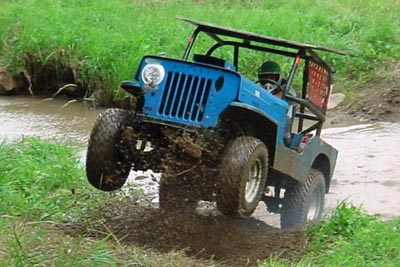 Once again in 2004 we have photos of Sean from the Tri-County 4 Wheelers races, where he and his CJ-3B are a great advertisement for the off-road capability of an F-head powered flatfender. 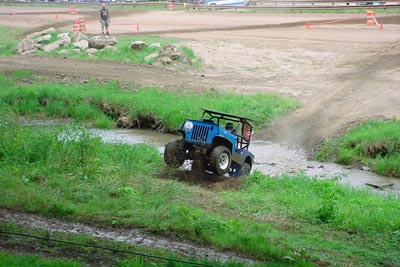 A wider view shows the line leading into and out of this water hole on the course. Coming around the curve just before the water hole (below) Sean demonstrates that Bits & Pieces has speed as well as power. 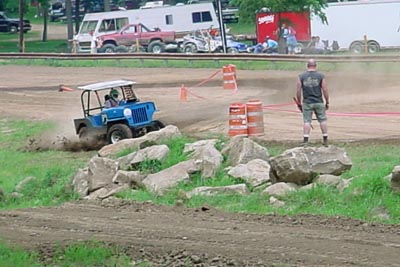 In 2006 the Tri-County club unfortunately had to cancel their late-summer events due to flooding which turned much of their grounds into one huge water hole (see Tri-County 4 Wheelers.) 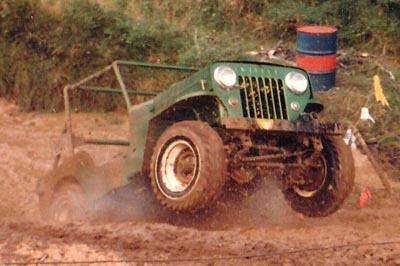 George McGuire powers his 3B out of a hole at the Jeep races in Cooperstown PA back in 1980. Thanks to Gerald Oswald for digging up this old photo. 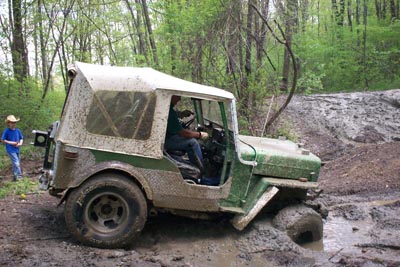 Twenty-eight years later, we spotted a photo of George McGuire still in the mud, at a 2008 event in Ohio, on the Tri-County 4 Wheelers website. 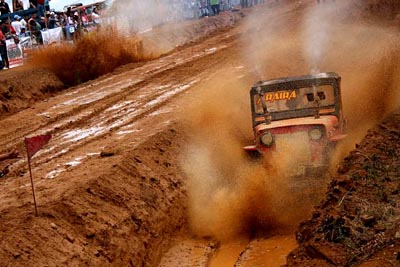 Thanks to Luis Guarapo of Jeeperos de Venezuela for this photo of the Piques Fangueros mud races in Colonia Tovar, Venezuela in June 2009. He reported the event, unlike some others, was well-organized with good parking, friendly security, and local police and firefighters on hand. 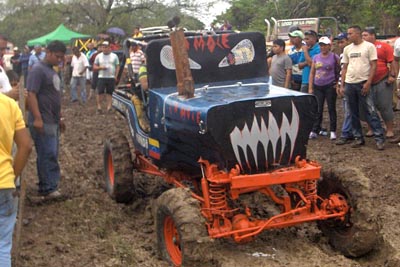 Thanks to Luberco for portraits of a couple of high hoods on hand for a 2012 Piques Fangueros event.

Given the above photo of the track, you can understand why this entry is named "La Mole" (The Mole). 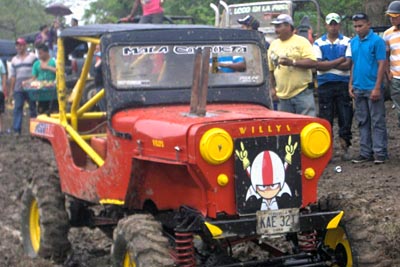 This Willys goes by the name of "Mala Conducta" (Bad Behaviour). Note the hole in windshield to let the driver actually see something during a run. He's got a license plate on the front, but it doesn't seem likely that he's actually street legal. 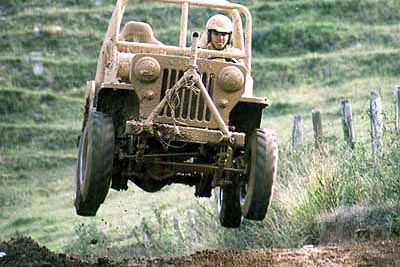 This muddy and airborne CJ-3B was a participant in the "Jeepcross" class at the "Jeepipoca" races in Brazil in 2002. 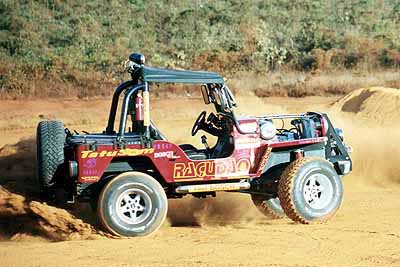 Also getting a lot of attention in the dirt at Jeepipoca in 2002 was a project by Luiz Henrique -- his remote-controlled CJ-3B known as "Tuiuiui." 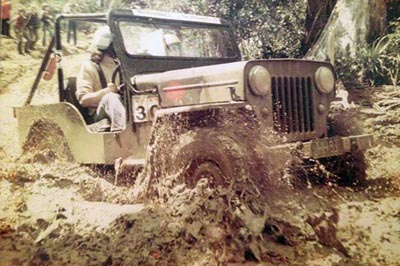 And last but not least muddy, here's a photo from Ashley Briggs showing his dad's 3B in a club race in Wellington, New Zealand in the 1980s.

Return to the Index of Unusual Photos.