The Jeep Fire Engine had been a minor sideline for Willys-Overland Motors since immediately after World War II, and the CJ-3B version continued the tradition of a self-contained little fire truck with water tank, pump, ladder, and suction hose for drafting from a reservoir. For greater capability it was also designed to pull a trailer with more water and a booster hose reel.

Willys fire Jeeps were given their own series of serial numbers starting in 1955, when both a CJ-3B Fire Engine and a CJ-5 Fire Engine (50K GIF) were offered. A handful of each were produced every year until 1961, when a record 65 CJ-3B units were built. A total of 102 CJ-3B factory fire engines were produced in those seven years (see Willys-Overland Production Figures.) Most if not all of those CJ-3Bs were converted for Willys by Howe Fire Apparatus of Anderson, Indiana. 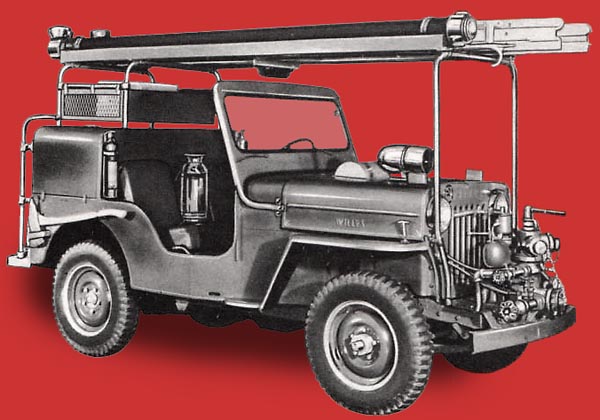 This illustration is from Willys' CJ-3B Fire Engine Brochure, which promoted the idea of a small, inexpensive piece of fire apparatus, particularly for use in protecting an industrial facility. 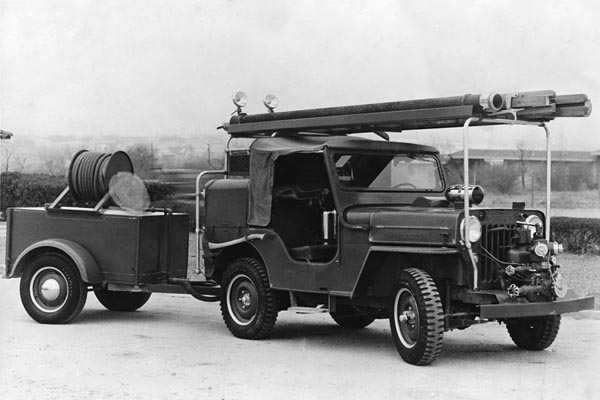 The 200-gallon water trailer with booster reel is shown behind a Jeep with canvas halfcab, in a photo found by Vaughn Becker in Australia. The left-hand-drive Jeep does not appear to have been assembled in Australia.

The bump on the hood installed by Howe to allow space for a governor which controlled pump pressure, appears to have been removed in the retouching of this photo from the Willys booklet Jeep Vehicles in Public Service, circa 1955. 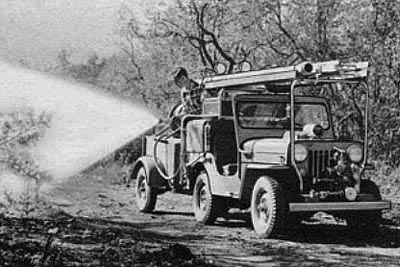 In an action photo from the same publication, a CJ-3B lays down water through a fog nozzle. 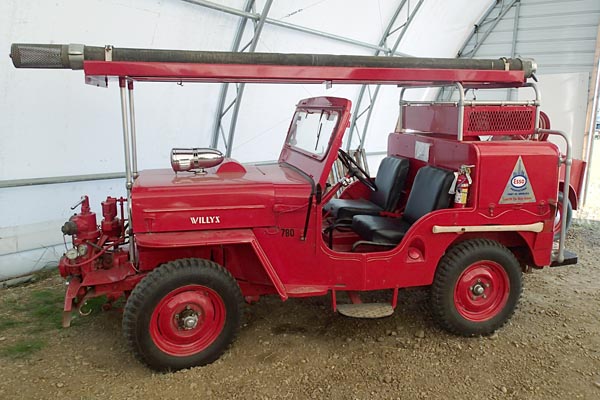 The most original CJ-3B fire truck I'm aware of, is at the Leduc #1 Energy Discovery Centre in Alberta. Among the many vehicles on display at the large oil industry museum, is this Howe Jeep formerly used by Esso in Fort St. John BC, on the Alaska Highway.

The phrase "Land of the New Totems" under the Esso logo, refers to the forest of derricks that sprang up in the 1950s in the oil and gas fields around Fort St. John.

Details visible in the large copy of the photo (330K JPEG) include the hook above the siren, to hold the hood open, and a Pulaski tool in place of the standard fire axe, suggesting brush fires were a bigger threat than structure fires. The water trailer with booster hose reel is visible behind the Jeep. Thanks to Sean Richens for the photo.

See also a front view photo (80K JPEG) courtesy of Leduc #1 Energy Discovery Centre. I would be interested in any more details about this Jeep, including its Howe serial number. 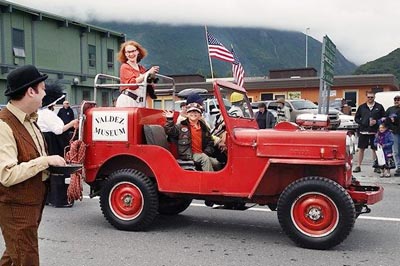 There's a Howe CJ-3B in the collection of the Valdez Museum in Valdez, Alaska. It's seen here in the Gold Rush Days parade there in August 2014.

The only vehicle in our Howe Fire Apparatus Production List designated as going to Alaska is Howe serial number 10737 in 1960, but it's not clear whether this is the same unit. 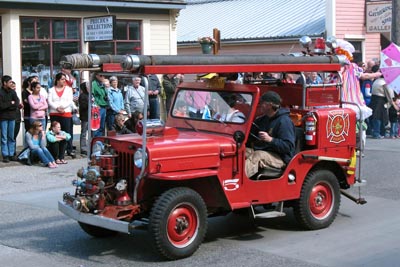 Or it could be this one in Skagway, also popular in parades. Thanks to Kurt Pherzog for this 2012 parade photo. 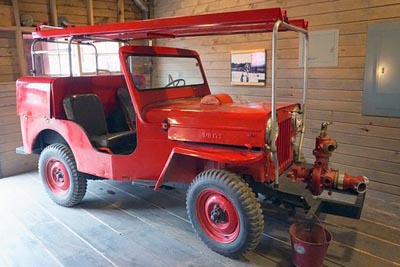 There's also one on display in the Cannery shopping complex in Icy Strait Point, with an extended bumper to protect the Siamese intake. I don't have any information on where the Jeep was in service.

Actually, there seem to be a lot of Howe CJ-3Bs in Alaska. The one below belongs to Fred Gray in Haines, a beautiful little town in the northern part of the Alaskan panhandle. Photo courtesy of Breck Fry. 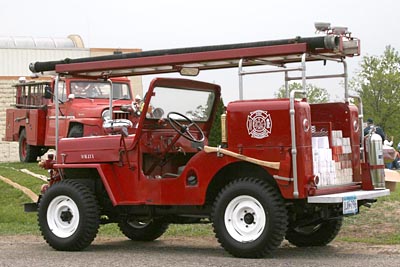 This 1954 Howe Willys was stripped of its pump and most of its racks and equipment after being retired by Western Electric in North Carolina. It was brought back to life by Jim and Kristi Rorah of Northstar Willys in Minnesota in 2006. See a page of photos of this Howe CJ-3B Fire Engine: When a High Hood Isn't High Enough. 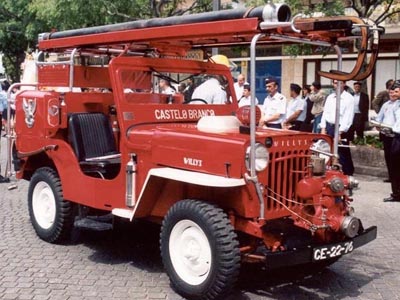 The Howe Fire Apparatus Production List shows a large number of Jeeps sold through Willys-Overland Export Corporation during the 1950s, and now we know what happened to at least one of them. This factory fire engine is owned by the city of Castelo Branco, Portugal and was photographed by J.M. Tomàs for Historical Fire Engines Europe.

The pump appears to be set up for operation from the cab, and the Jeep has been restored with a livery including white paint on the fenders and the distinctive bump on the hood (which provides clearance for a pressure-activated pump governor below the carb.) 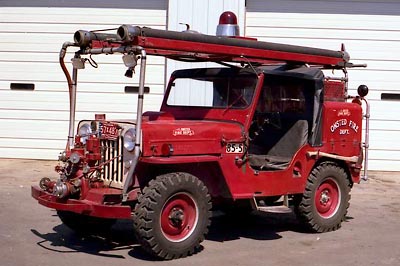 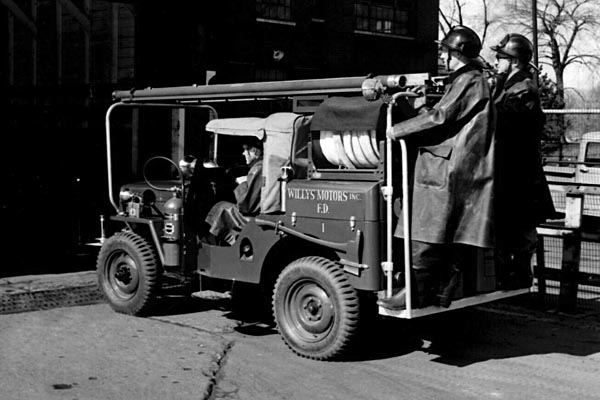 The Willys Motors Inc. F.D. at the Toledo factory also had a canvas top installed on their unique Jeep Number 1. In addition to the top, the booster reel and the fender-mounted CO2 extinguishers and hand lanterns are unusual. 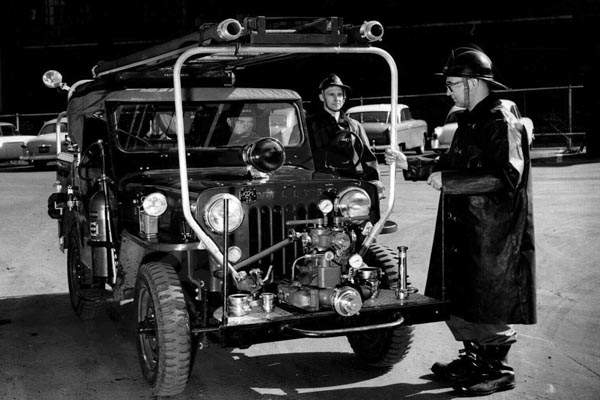 Maybe most surprising about the Willys F.D. CJ-3B is that it doesn't have the bump on the hood for the Howe governor system, so it appears to be a custom-built unit rather than a modification of a Howe fire engine.

I don't know if these two photos were ever used in a Willys publication.