The Little Engine That Could

The only color photograph we have of the Jeep Gladiator fire engine designed by Jerry Formaz in 1966, shows the truck with Chief Basil Stoddard on the day it was delivered to the City of Walled Lake, Michigan (below). Looks like Walled Lake was a town that knew the value of Jeeps, judging by the snow on the ground, and the CJ-5 with Meyer hardtop in the background of the photo. 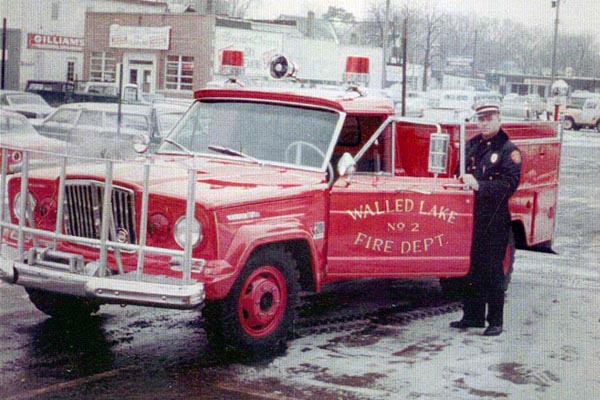 Formaz had identified a need in many cities for a versatile mini-pumper capable of dealing with incidents ranging from brush fires, to freeway accidents, to parking garage calls. He built a truck capable of filling that need, but unfortunately never got enthusiastic support from the Kaiser Jeep Corporation.

On this page, we present for the first time the story of this unique fire truck, in the words of Jerry Formaz. -- Derek Redmond

My first love of small fire apparatus were the FC units built by Valley Fire Apparatus of Bay City, Michigan. When I got to the point where I had the contacts that perhaps I could rep the company, I called several times but could not contact them. My wife and I decided to drive up to Bay City and find them. I went to their location, only to learn from a neighbor that they had ceased operations about two weeks earlier. I did not stop thinking about my vision of a smaller, better unit.

I was attending a meeting in the Michigan capitol of Lansing, and happened to park in the city's brand new parking garage. As I parked and got out of my car, I was surprised at how low the ceiling was, and I wondered how they would handle a car fire in the garage. I did some "inquiring" and after a short time the AP article appeared. I also visited parking garages in several other cities and noticed the same situation existed.

I contacted Penco, a small fire apparatus body repair and service center owned by a friend of mine, Ken Pence of Perrysburg, Ohio, to construct and mount the unit on my 1966 Jeep chassis, to my drawings and specifications. The truck was V8-powered, dual-rear-wheels, and the transmission had the provision to utilize two power take-off units. One drove the water pump and provided "pump and roll" operation, and the other PTO powered the Warn winch. 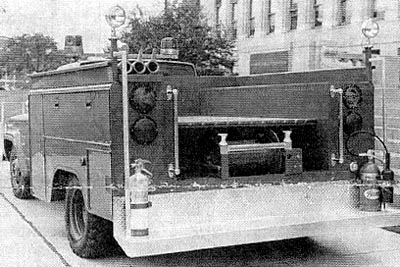 The only acknowledgement we ever received from Jeep after a brief meeting in Toledo when this picture was taken, was a short 1966 feature in Jeep News (Vol.12, No.5). See the Jeep News front page (300K JPEG). Not really knowing us very well, but knowing we did not have a manufacturing plant, they seemed a bit skeptical as to where we were going, and you can't blame them.

This photo shows the electric rewind booster hose reel with controls to the right of the reel. The complete pump panel for stationary operation of the pump is located inside the compartment just behind the driver's door.

The front view photo (100K JPEG) also used in the Jeep News article and later included in Jeep: The Unstoppable Legend (Arch Brown, 1994) shows the ground sweep nozzles, controlled individually by the driver by 1/4-turn ball valves. They were originally equipped to apply coverage of 60 degrees, and the tips could easily be changed to cover a wide variety of patterns.

An Offer I Couldn't Refuse 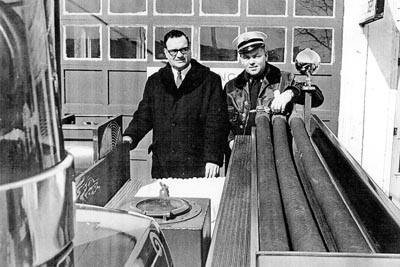 The truck attracted a lot of attention and did many demonstrations. I hadn't planned on selling it so soon after completion, but could not pass up the opportunity to sell it to the City of Walled Lake in November 1966.

This photo from the Utica Daily Sentinel shows me with Walled Lake Fire Chief Basil Stoddard. In the center is a manual fill for the main water tank. A piped fill with a 1/4-turn shutoff ball valve was mounted in the front vertical compartment, behind the compartment doors on both sides of the body. The round cover on top of the manual fill tower is hinged. The safety glass disc was installed to allow visual observation of the water level in the tank, and also served as a "blow-out" safety device to prevent over-pressurization of the tank when filling from a pressure source.

Also shown is the unique method of mounting three 8 ft. lengths of hard suction hose. The end with the exposed male threads was inserted under the covered portion of the forward end of the hose tray. The opposite end with the rotating female threads had one of its "ears" inserted into a machined slot in a box attached to the rear of the hose tray, thus allowing for quick, easy removal.

The wood partition and large smoke ejector fan were added by the Fire Department. A two-section 16 ft. extension ladder mounted on the right side of the body, with the forward end of the ladder slid under a cover similar to the suction hose. The opposite end of the ladder was attached at the rear by a spring-loaded, quick-release De-Sta-Co clamp. 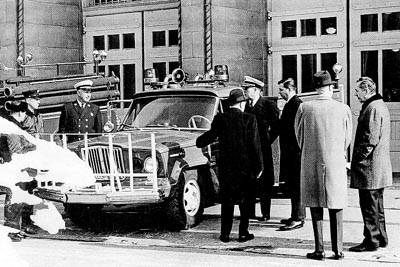 In this photo taken outside the City of Detroit Fire Department headquarters, the people pictured from left to right are:

The reaction in Detroit was enthusiastic by the Commission, and better than I expected by the Chief and Deputy Chief. The fire fighters took a rather dim view, and the fire fighters union rep. was very much against it, as he saw it as a threat to job security (a two man truck instead of a four man truck). But anyway, our timing was a bit bad, as the economy was starting to slip, and City funding was running dry.

Note that the wheels were originally painted white and the cab Jeep President Red when delivered to me by the Jeep factory. When we painted the body, I had the wheels and body painted the same President Red, a look I preferred (see the photo at the top of this page). After the truck was delivered to Walled Lake, they painted the wheels white again, apparently a look they preferred! I do not know how long the unit was in service, or what became of it. I moved on to other ventures and lost touch with the Fire Chief.

Pressure was put on us to back off, primarily by the largest fire apparatus company we represented. They were aware of what we were doing, apparently had done some market research, and saw the potential and actually had a unit on the drawing board shortly after we sold ours. I looked one over when it was first built, and was not impressed. It was very lacking and did not sell well at all.

The mini-pumper concept really took off in 1971, with Pierce getting the majority of the business, and rightfully so, using a lot of 4-wheel-drive International Harvester light duty chassis. Howe Fire Apparatus remained the "approved" fire apparatus supplier for Jeep. This was the one initial goal of mine that I never achieved, but we gave it a damn good shot with a well-performing, easy to operate "Little Engine That Could." -- Jerry Formaz

Thanks to Jerry and his son Bob for helping us put this story on the historical record. -- Derek Redmond