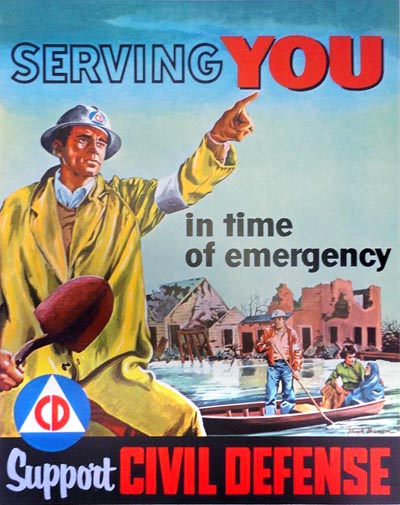 The concept of organized protection of civilians from military action spread widely after World War I, and since then the triangle has been an internationally recognized symbol of civilian defense.

The Cold War threat of nuclear attack hung over much of the planning by the Federal Civil Defense Administration (FCDA) in the 1950s and 60's, including the building and equipping of fallout shelters and evaluating the damage from bomb tests. (See Civil Defense Jeeps on CJ3B.info.)

But the organization and its equipment were also available to help in other types of disasters, and Willys no doubt saw Jeep 4-Wheel Drive as a strong selling point for vehicles which might be called upon to respond to situations such as floods or earthquakes. 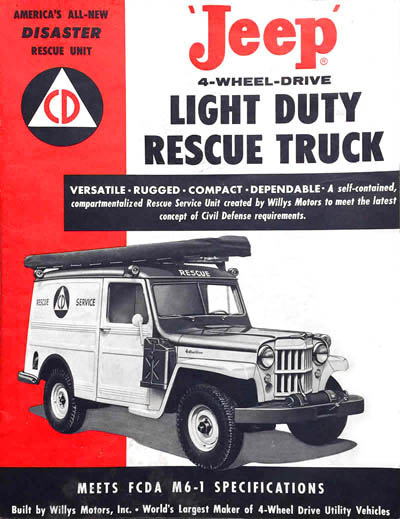 The Light Duty Rescue Truck is perhaps the rarest of the factory-authorized Willys Jeep emergency vehicles, including the Jeep Fire Engine, Crash Wagon, Commando Fire Truck, and Willys Ambulance. This version of the Willys 4x4 Panel Delivery truck was designed to FCDA specifications, which meant that unlike those other special-purpose Jeep vehicles, it was quite similar to Civil Defense LDR trucks built by other manufacturers such as International and GMC (100K JPEG).

That competition from other automakers for this limited market meant that the Rescue Truck was not a big seller. Willys-Overland Production Figures show only fourteen 6-226 4x4 "RT" vehicles with serial number prefix 54068-07 were built between 1956 and 1959. 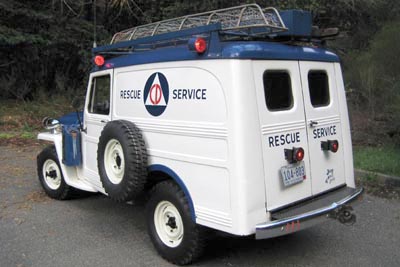 This 1959 truck belongs to Paul and Jane Barry of Willys America. It logged 3300 miles in Civil Defense service in Keewatin, Minnesota, where it was retired in 2006, the same year the federal government officially dropped the triangle Civil Defense logo seen on the truck. 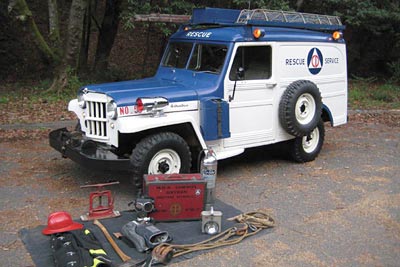 Paul took this photo displaying the kind of equipment the Rescue Truck would have carried, including protective gear, breathing apparatus, block and tackle, battery lantern, and fire fighting tools. 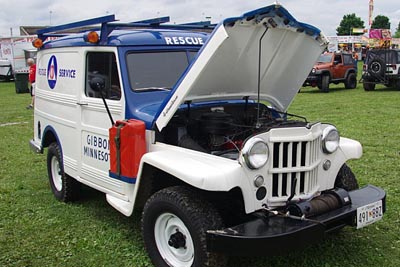 Another Rescue Truck from Minnesota, now registered in Maryland, was seen at the 2012 All Breeds Jeep Show in Pennsylvania. It's reportedly a 1956 model. Thanks to geepstir on Flickr for the photo. See also a rear door open (100K JPEG). 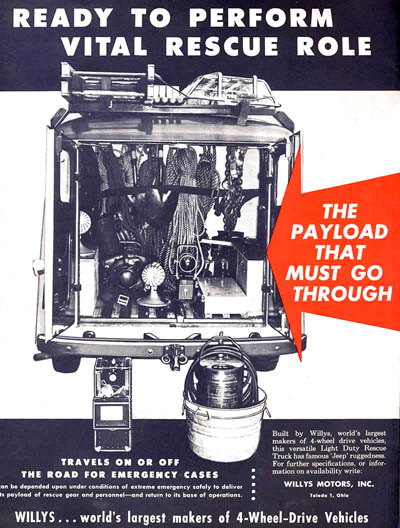 The back cover of the 8-page Willys brochure (front cover seen above) shows the equipment stowed in the truck. The LDR was available from Willys as a vehicle only, or equipped with either the standard FCDA tools or both the standard and supplemental FCDA tools. 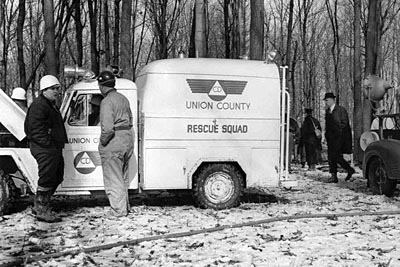 Apparently Willys was also in competition with itself for the Civil Defense market. This 1967 photo shows what looks like a stripped-chassis Willys truck with an aftermarket oversize cargo box.

Pages 2-3 of the brochure trumpet the fact that Willys managed to meet the FCDA specifications. 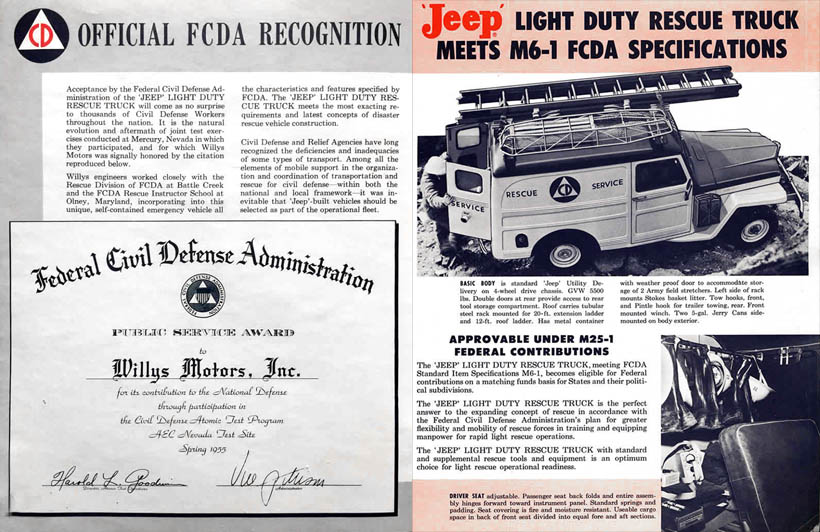 Pages 4-5 are basically more of the same, plus a mention of 4-wheel drive. 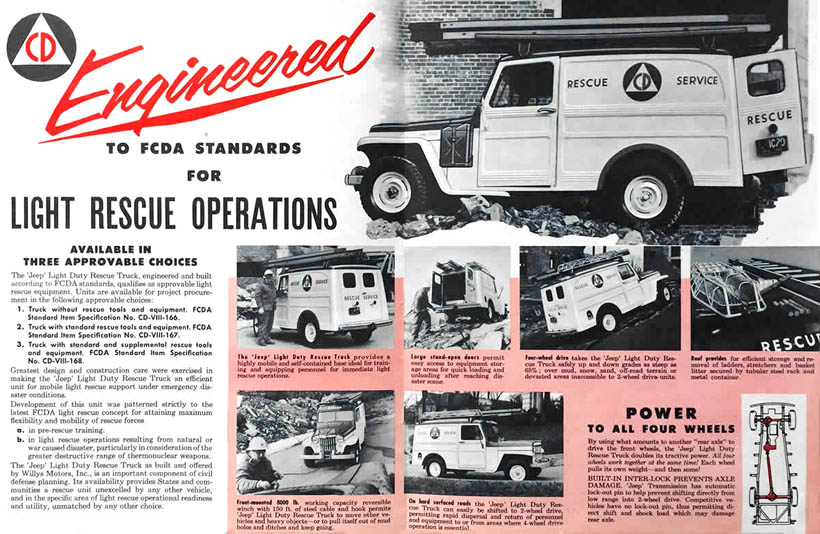 Pages 6-7 list the Jeep's mechanical specs, and the standard and supplemental equipment available with the truck. 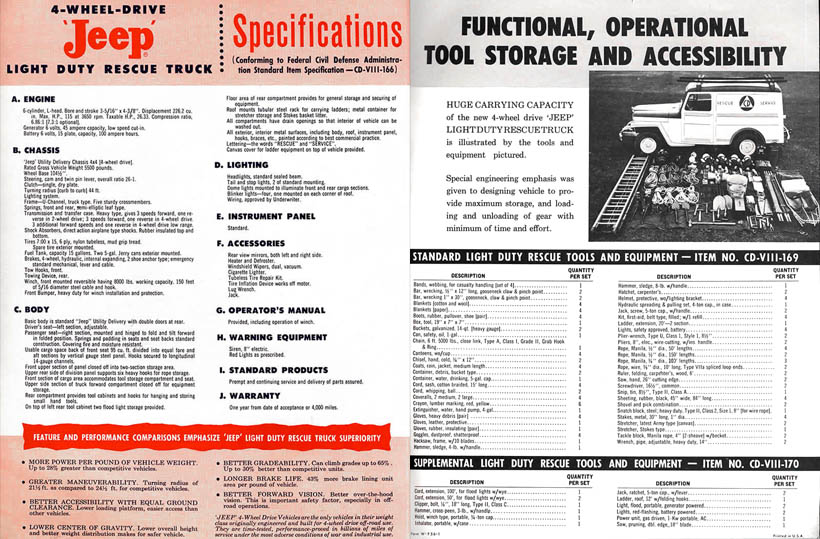 Thanks to Ryan Ruck for the brochure, Paul and Jane Barry for the photos of their truck, Mulvane KS Emergency Services for the GMC photo, and Eric Green of the Civil Defense Museum. -- Derek Redmond