Fire protection at U.S. military installations during the war in Vietnam was provided by a combination of military personnel and civilian contractors. Typically small bases and airstrips were covered by Army and Air Force firefighting detachments, while larger installations had fire departments manned partly or entirely by civilians. 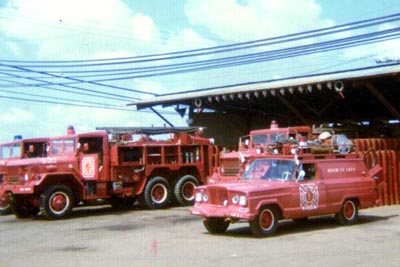 See lots of information and photos of these trucks, on the "Vietnam War Firefighters and Fire Apparatus" page at Fire Trucks at War. 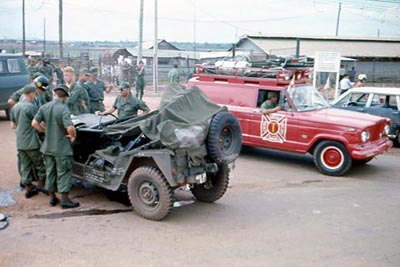 This photo of Long Binh FD Rescue 1 in service at a MUTT rollover circa 1969, is courtesy Anthony Dillon. 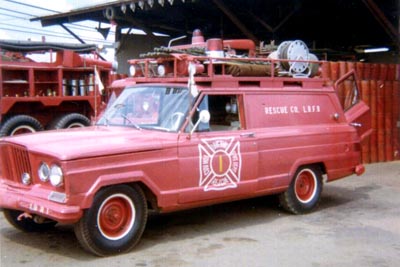 Rescue 1 was one of a number of vehicles converted by the LBFD for use on the base, which was the equivalent of a small city. Rather than having its body modified to increase capacity, this 1962 Wagoneer Panel Delivery carries bulky equipment including rope and stretchers, in a cargo rack on the roof. 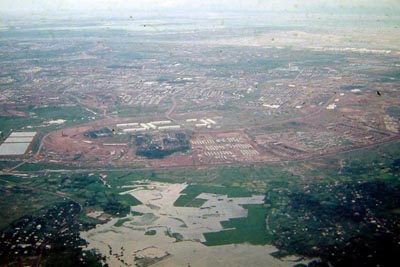 According to Wikipedia, Long Binh Post was the largest U.S. Army base in Vietnam with over 50,000 women and men. It had hospitals, air conditioned office buildings, restaurants and night clubs, swimming pools, tennis courts, golf driving range, a bowling alley, and a bank. This 1968/69 aerial photo was taken by David Parsley. 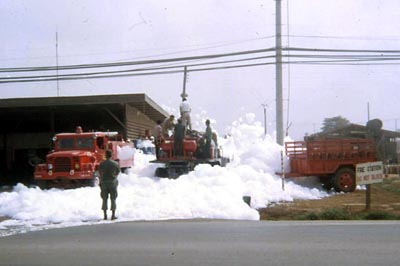 Gregory Farris of the 71st Transportation Battalion took this shot as he was passing the Long Binh fire station and saw this massive display of foam. The truck producing the Hi-X foam appears to be the same one seen in a 1971 front view photo (60K JPEG) in Fire Trucks at War. 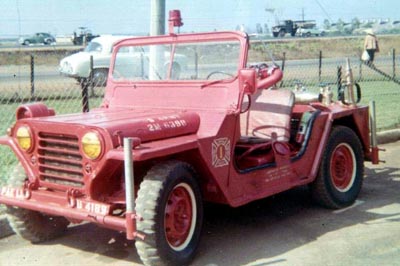 LBFD's creativity didn't stop with rescue and foam trucks. They appropriated this M151 MUTT in order to build a self-propelled deluge gun. It's one MUTT that really helps the vehicle live up to its name, "Multipurpose Utility Tactical Transport."

Dan Mathieu comments that it appears to be fitted with a Whelen Model WRM aircraft anti-collision beacon.

Thanks to Ted Heinbuch for thee photos taken in December 1969. 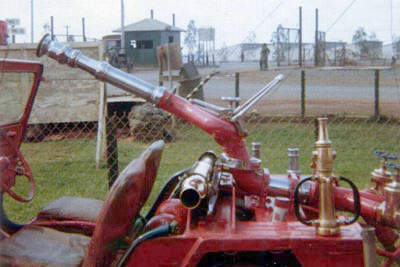 Like some big-city fire departments, LBFD probably discovered that there were plenty of alleyways and other tight spots where it was difficult to get the big 530B pumpers close to a fire. And like the Chicago FD, they realized a Jeep was a good way to lay hose in and get a master stream close to the blaze. 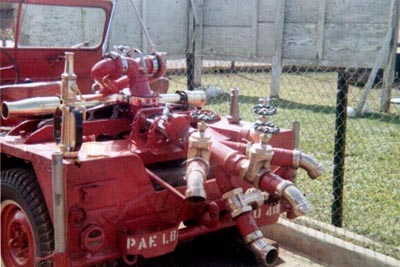 "PAE LB" on the bumperette stands for "Pacific Architects and Engineers, Long Binh." PA&E was one of the principal holders of civilian contracts for military operations in Vietnam, and is still a major provider of logistical and support services to the U.S. and other governments.

The plumbing on the back of the MUTT allows the deluge gun to be supplied by up to four 2.5" lines. 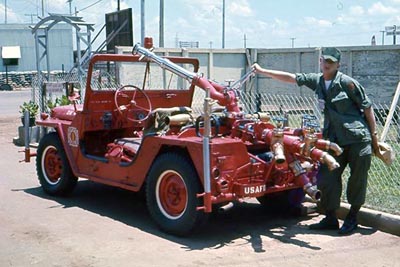 In this photo, courtesy Anthony Dillon, the MUTT has been relabelled for the USAFD. You also get a good view of the pipes added as stabilizers at the corners. 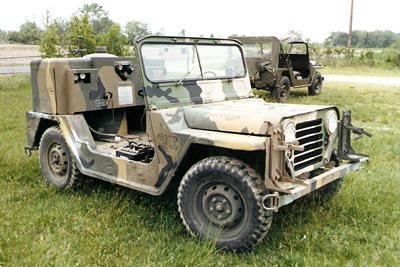 Fire Trucks at War also came across this MUTT formerly in service as a dry chemical crash truck for the U.S. Marine Corps. Equipped with a 500-pound dry chemical tank, it would also have had a nitrogen tank mounted in place of the passenger seat. It carries extinguisher mounts on the front bumper. 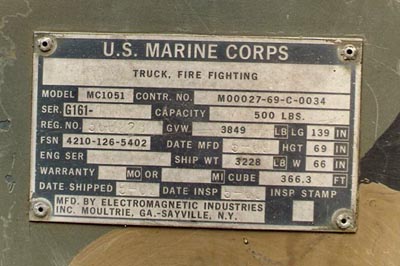 This Jeep was not a field conversion, but rather was built in 1969 by Electromagnetic Industries Inc. of Georgia, who built a variety of products such as diesel generators for the military.

The design is very similar to the dry chemical Jeeps built for the civilian market by Ansul Chemical. Further details, such as how many of these units were built for the Marines, are needed.

Thanks to Fire Trucks at War, and to David Parsley, Bob Hersey, Greg Farris and Ted Heinbuch for the photos. Any further information welcome. -- Derek Redmond