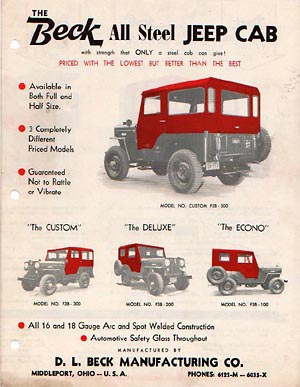 D. L. Beck Mfg. of Middleport, Ohio, manufactured Jeep cabs for the CJ-2A and 3A under the Beck name until the company was purchased from D.L. Beck by Hubert A. Kelly, and became part of Kelly Manufacturing Co.

Mike Kelly, who as of 2009 was the sole living Kelly heir who had been involved in the family business, told CJ3B.info that the sale took place in the latter part of 1951. The Middleport plant then continued to fabricate steel cabs with similar components and design, for Jeeps up to the CJ-7, but made a transition to using the Kelly brand name.

Both Kelly and Beck cabs were marketed as Custom Model 300 and Deluxe Model 200. Both are quality hard tops with roll-up windows. The Model 300 is claimed to have the "greatest glass area of any Jeep cab manufactured and the lowest priced in its class." Specifically, the Beck Custom F3B-300 has "2288 square inches" of glass.

The differences between Kelly and Beck are not consistent. It would appear that there are two major differences: Kelly normally has two strengthening ribs stamped on all side and rear panels, and the roof is also ribbed. The doors of the Kelly are sometimes ribbed and sometimes not.

Beck has no strengthening ribs on roof, rear, side panels, or doors. The advertising brochure shows us that the primary characteristic other than the absence of ribs is the curve at the lower rear quarter of the door. But sometimes the Kelly side door is found on what appears to be a Beck cab, probably during a period when tooling was being modified after the sale. 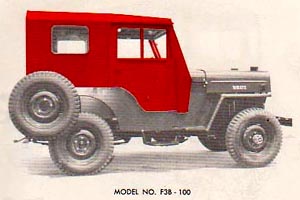 Beck also offered an "Econo Cab" Model 100, which was differentiated by a split, sliding door window (non-roll-up). The brochure (50K JPEG) claimed that the Econo cab was the least expensive all-steel cab being sold at the time.

Construction of all models was from flat sheets of 16 and 18 gauge steel, insulated on the inside with automotive undercoating. The inside of the doors was painted black, and the rear door was self-supporting when open, using "Hi-Lift" supports. 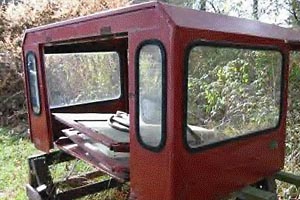 The 45-degree angle at the roof edge identifies this Custom Full Cab Model 300 as a Beck or Kelly, and the lack of stamped ribs in the sides tells us it is a Beck. Its window configuration is identical to that shown in the brochure (100K JPEG.)

The angular construction of the roof is a Beck/Kelly signature. Mike Kelly comments that, "The angular roof line was to mate the wider body section of the cab to the narrower Jeep windshield and was a Beck design." 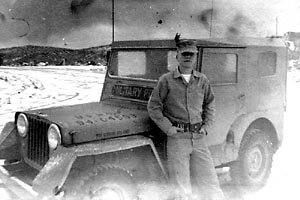 The Beck Deluxe Model 200 cab is seen here on a U.S. Navy CJ-3A on Adak Island, Alaska in 1956. Though the military "arctic top" cab closure was available in the 1950s, it may be that the Beck was a less expensive alternative for light duty uses. The young Marine is Ed Nicholls who comments, "The Jeep was held together with whatever -- no heater and various small holes in the tin floorboards. Probably warmer outside. However, warmer than walking in a Willowah! I was 17 and thankful for anything."

This photo (see a larger copy, 70K JPEG) clearly shows the interesting folding of the sheet metal above the door where the cab narrows to meet the windshield. It is almost an "origami" approach to sheet metal forming, and eliminates the need for complex stamping dies and equipment. 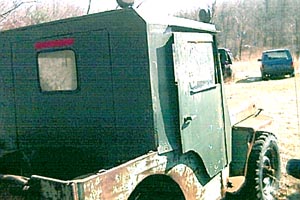 Mahlon Gridley of New York owns this CJ-2A with what looks like a Beck half cab. But the very small rear window suggests that it could possibly be a Kemco. The Beck brochure notes that the rear door of the half cab version is removable.

See also Beck's "doggone" slogan (40K JPEG) from the folding mailer brochure, which was a cover illustration (50K JPEG) for The CJ3B Page in 2003. 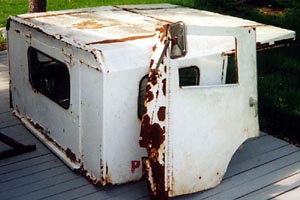 This top lacks stamped ribs either on the roof, sides or doors; this means it is not a Kelly. The lack of stamped ribs and the curve on the door bottom means it could be a Beck. But it isn't -- it is a Kemco. Owner Rich Feronti tells us "The tag on the top (70K JPEG) says 'KEMCO ALL-STEEL CAB, F3B200A, Middleport Ohio, Kelly Manufacturing Co, Charleston W Virginia.' Also a small emblem with calipers and words like Precision, Quality, etc."

Kemco is using Kelly's (and Beck's) model identification system. The number "F3B200A" means it is a full top for a 3B and is the series 200 (with smaller windows). It could be that "A" means full top and "B" following the model number might mean half top. It should restore to being a very nice looking cab. See also a front view photo (60K JPEG).

Mike Kelly told CJ3B.info in 2009, "My grandfather was involved in many business ventures over the years and they were almost always under an acronym of his name. KEMCO, I believe, stood for Kelly Equipment Manufacturing Company, and was an interim company after the purchase of Beck and while D.L. Beck was a working partner there." 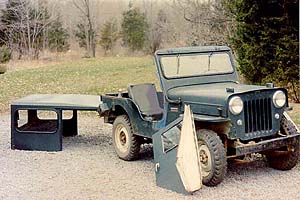 This full top was installed on Derek Redmond's 1959 CJ-3B when he purchased it. At first the top appears to be a Kelly, but it lacks the strengthening ribs on the side and door. So could it be a Beck? Maybe, but on careful examination the window system appears slightly different from the Beck windows shown in the brochure, and the cab has no interior insulation. So then what is it? If it's not a Beck, it most likely is a Kemco cab. See also a photo of the cab installed (50K JPEG.) 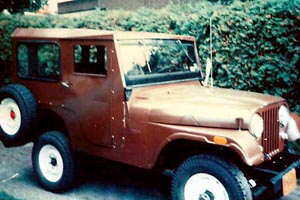 Continue to Kelly All-Steel Cabs or return to the Table of Contents.

Thanks to Todd Kerzic for the scans of the Beck brochure, and Mahlon Gridley, Ed Nicholls and Rich Feronti for photos. Also Bart McNeil for his research, and Mike Kelly for helping us preserve the story of his family firm. -- Derek Redmond

Last updated 10 May 2009 by Derek Redmond redmond@cj3b.info
https://cj3b.info/Hardtops/Beck.html
All content not credited and previously copyright, is copyright Derek Redmond