The Congo became a key country for US policy in the early 1960s and was the scene of extensive intelligence and covert operations by the Central Intelligence Agency (CIA). There were also various paramilitary operations carried out by the Agency. In 1962, CIA sent half-a-dozen Cuban pilots to fly some armed trainers but until 1964 the Force Aerienne Congolaise (FAC) rarely operated outside the capital Leopoldville. The requirement for Jeeps or other terrain vehicles was therefore minimal to begin with. The CIA air unit was always officially a part of the FAC (see Part 14) but was in practice run as a separate entity.

When the campaign against the Simba rebels began in 1964, the air operations were also considerably expanded. A number of forward bases were established and additional aircraft and crews were brought in from abroad, by the CIA, Belgium and other parties. As the ground forces were expanding at the same time, the air operations did not get very high priority when it came to vehicles and at first had to make do with whatever could be found locally.

The first air campaign against the Simbas in eastern Congo was carried out around Bukavu (see the Congo map), where CIA T-28 aircraft strafing the rebels more than once prevented the fall of the town. 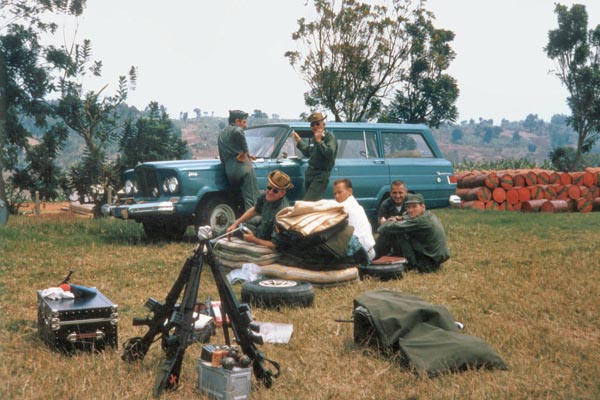 Early in the campaign the US Air Force deployed some of its Air Commandos in support, for maintenance and to fly transport aircraft. These men are having a break at Kamembe airport near Bukavu, among a litter of spare parts and personal weapons, and next to the fuel dump. Their car is a very new Jeep Wagoneer with a "CC" (Corps Consulaire) oval on the front; presumably borrowed from the US Consul at Bukavu. (Photo © Russ Gentry) 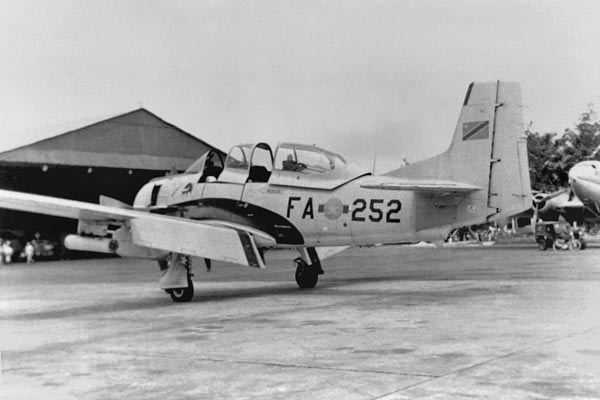 The T-28 Trojan was the mainstay of the CIA air unit in the Congo and there were as many as a dozen in service at any one time. The first major objective of the campaign against the Simbas was to recapture the city of Stanleyville, and this photo was taken at Stanleyville airport some time after it had been restored to central government control. In the background is one of CIA's C-46 transports and in front of that is an M606 Jeep, plus a more humble means of transport: a bicycle. (Photo via J-P Sonck) 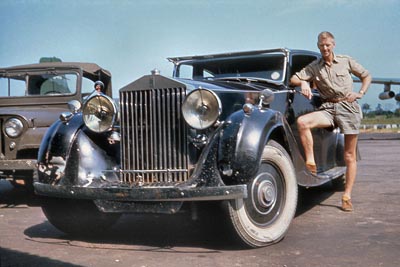 A touch of style: The CIA aircraft mechanics found not only bicycles in Stanleyville when it was liberated in late 1964, but also this 1930s Rolls-Royce, which was appropriated for their own use. Next to it is a less ostentatious CJ-6 Jeep (see Part 13).

Behind the vehicles are two of the Douglas B-26K Counter-Invader bombers operated by the CIA air unit. Stanleyville remained a main base for the FAC during the rest of the campaign against the Simbas. (Photo via Jens Jensen) 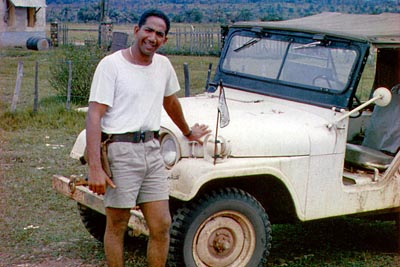 Cuban exiles, most of them veterans from the Bay of Pigs, made up the majority of the CIA pilots in the early part of the Congolese campaign. This is Gonzalo Herrera, one of those who flew T-28s and B-26s in 1964. He is leaning against an M38A1 of uncertain origin; the small flag is unfortunately impossible to make out. The white colour suggests a former ONUC vehicle but it lacks any remains of UN markings, and ONUC had very few Jeeps of this type (see Part 7). The black windshield frame is also unusual for an M38A1 and might be a replacement item from a CJ-5 or -6. (Photo © Raul Solis) 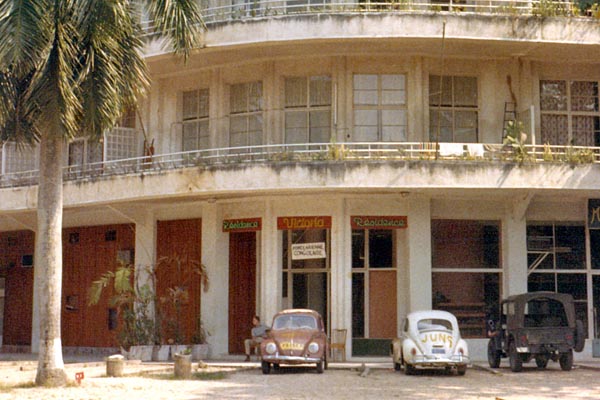 The Résidence Victoria in Stanleyville was an up-market apartment building which had been used to house many western hostages during the time the Simbas held the city. After the liberation, it was largely taken over by the air operation staff for accommodation and offices. Parked outside are a couple of VW Beetles -- popular transport with the mechanics and prominently marked with the users' names to discourage "borrowing" -- as well as an M606. (Photo © Flemming Friberg)

The town of Albertville, known as Kalemie from 1966 (see the Congo map) was the most important forward base for the CIA air unit, together with Stanleyville (which was renamed Kisangani). The airfield was right on Lake Tanganyika and served both as a base for offensive air operations and as a supply hub for the army units in the area. At first all military supplies, including vehicles, had to be flown in, but later the town could be supplied by rail or lake steamer. 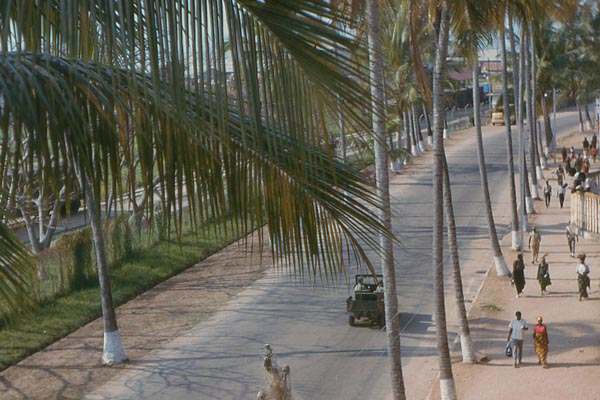 Albertville was picturesque and well-kept, in comparison to many other town in the Congo. This is the palm-lined main street, with a Jeep heading for the harbor ahead on the left. (Photo © Larry Murphy) 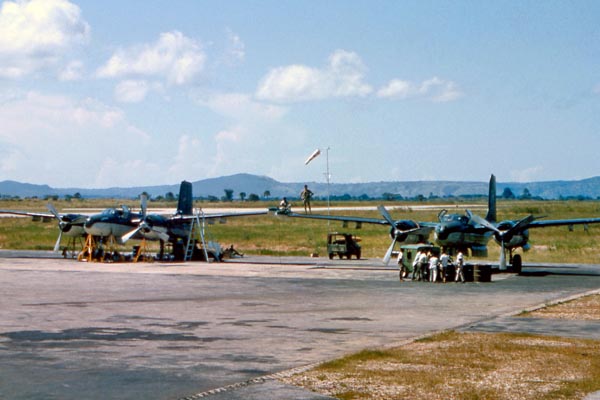 The CIA normally kept four to eight T-28s on station at Albertville, and at times also a couple of Douglas B-26 Invaders. These two B-26Ks are receiving some attention on the flight line in early 1965: there was no usable hangar at the airfield. One aircraft is placed on jacks, presumably for undercarriage repairs, while the nearest one is being prepared for refuelling. All fuel had to be pumped directly from drums as there was no refuelling truck. The Jeep between the B-26Ks appears to be a CJ-5 in civilian colours. (Photo © Jan Hekker) 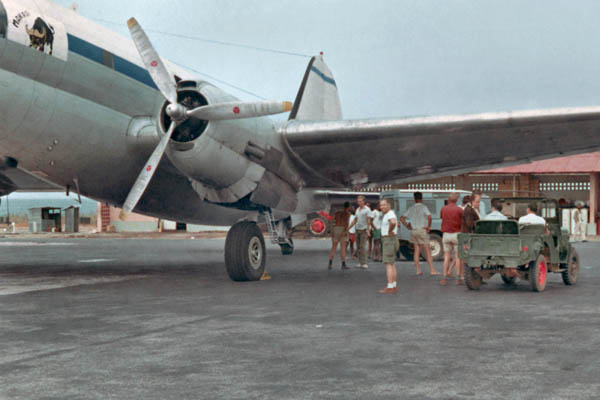 A Curtiss C-46 transport brings supplies to Albertville. The people on the tarmac in front of the small airport building are mostly Europeans working for the WIGMO maintenance company, set up by the CIA. Lake Tanganyika is visible in the left background. The M606 lacks a licence plate and is likely a hand-me-down from the Congolese army, the ANC. The Makasi bull seen on the C-46 was the symbol of the CIA air unit. The badge was occasionally applied to vehicles, including a few Land Rovers, but never to any Jeeps as far as known. (Photo © Juan Person) 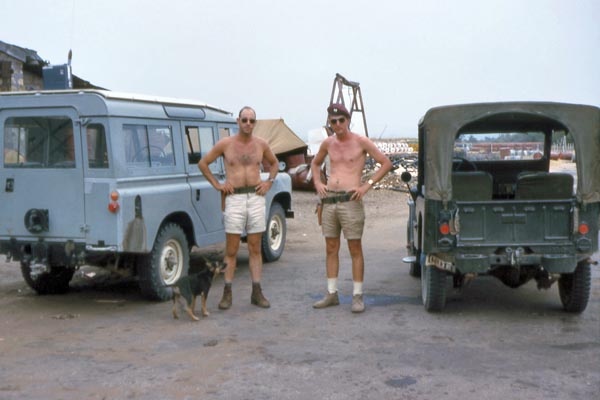 Two American CIA Air Operations Officers in Albertville in 1965, together with their pet dog and their transportation. The CIA air unit partly relied on normal military channels for its basic supply as it was officially part of the FAC. The standard M606 on the right therefore has a military plate and is indistinguishable from any unmodified army Jeep: the FAC did not have a separate vehicle register, nor did their vehicles usually carry any FAC insignia. In addition, CIA procured a number of Land Rover 109s for its air unit personnel, all with Congolese civilian registrations. (Photo via Larry Murphy) 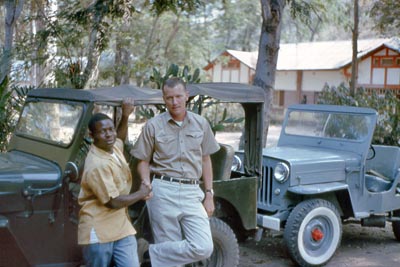 Air Operations Officer Larry Murphy greeting a Congolese friend in Albertville, in front of his M606 which still looks almost new -- the air ops vehicles normally did not travel far, nor did they often need to go off-road or carry much load. The Jeep behind it is an older, civilian model CJ-3B, but looks like it has had a recent repaint. The light gray color and the whitewall tyres suggest that it may belong to the police. Note the CJ-3B does not have the "ventilating" windscreen normally seen on the M606s, which allows the glass to swing open. (Photo via Larry Murphy) 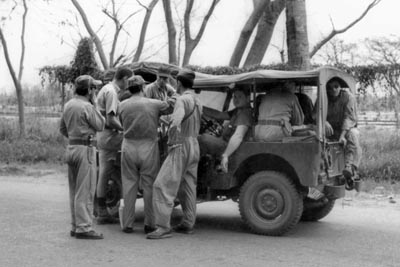 Exile Cuban air crews, plus a French helicopter pilot, pile into an M606 for the trip from their hotel in downtown Albertville to the airfield several miles away: there was no accommodation at the airfield, except for some tents for the Congolese guards. Not only the Jeep but also the flight suits and other equipment were deliberately bland looking and devoid of any unnecessary identifying markings. (Photo via Larry Murphy) 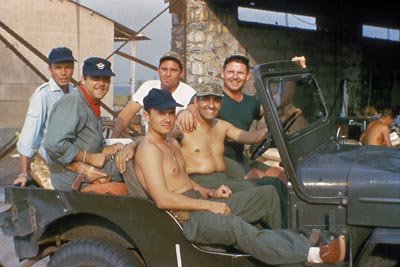 Some of the people from the above group in their Jeep at the new Albertville airfield, in more relaxed attitudes and dress. The spare wheel bracket looks like it has been spot welded in place, presumably after some minor mishap, but there is no spare wheel fitted since the Jeep was only driven short distances, between town and airfield. (Photo © Joaquin Varela)

Off the Beaten Track

Not all air force and CIA Jeeps spent all their time at or near an airfield or city, however. They occasionally also needed to use their four wheel drive in earnest, in the line of duty or otherwise. 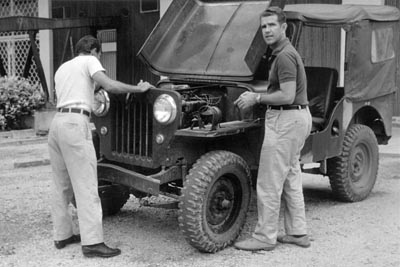 "Why won't the #§*@ thing start?!" Even the CIA can have car trouble, as these Cuban pilots found out. (Photo © Juan Peron) 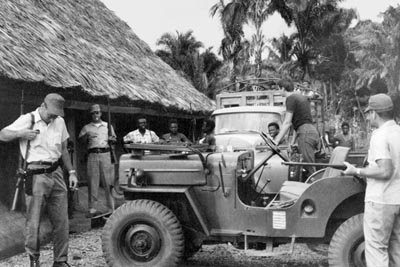 Once the back of the rebellion was broken by mid 1965, there was also time for the odd recreational trip out in the bush. Here a group of CIA air officers have gone to a friendly village far into the forest to hunt game. Some villagers are coming along in a truck to guide the party further into the countryside. The striped rectangle on the side of the M606 is probably just the remains of a US Aid sticker that has been peeled off. (Photo © Don Gearke) 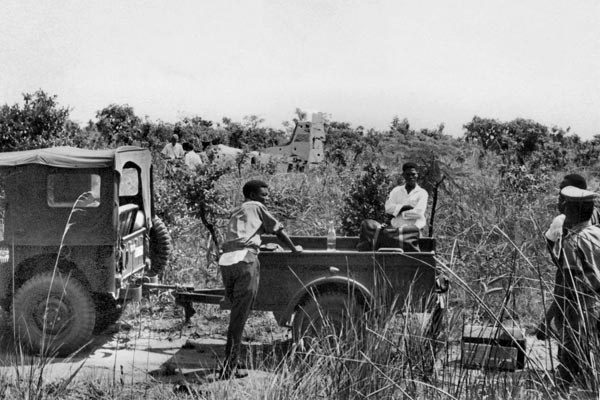 By 1967 the CIA paramilitary operation in the Congo was winding down and had a low priority compared to the escalating war in Southeast Asia. There was a shortage of spare parts for the T-28 aircraft and WIGMO therefore sent out patrols to recover what they could from crash sites. This team travelled up to near the Sudanese border with a Jeep and trailer, to a T-28 that had come down in the bush two years earlier. (Photo © Jan Hekker) 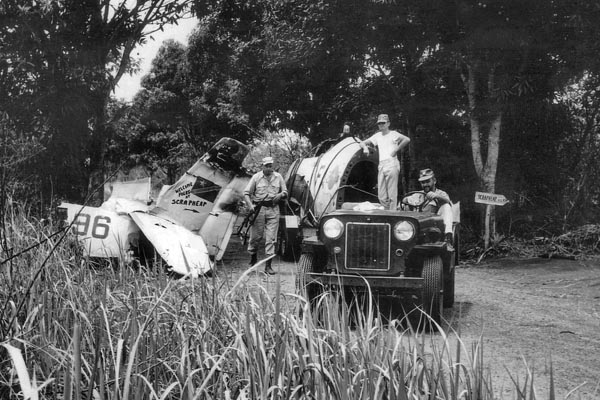 Another team was sent to locate a T-28 that had landed more or less intact in northern Congo. The center section of the aircraft has been loaded on a trailer, pulled by an M606, ready for the long trip to the air force workshops. The Jeep is unarmed but still has had its windshield removed. The aircraft tail section was too damaged to be of use and was left as a marker at the nearby main road. A second photo shows the trailer and Jeep from the rear quarter (100K JPEG). (Photos via Rudy Körner and Hans Bremer)

The CIA also had smaller ground and maritime forces operating in the Congo but neither of these is known to have used Jeeps. They are included here for completeness. 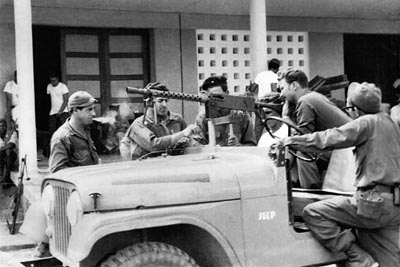 These exile Cubans of the CIA hostage rescue team are examining the gun installation on an ANC CJ-6, likely to get some practical tips for a similar installation on their own International Scout 80 (100K JPEG). Or they may have swiped the whole mounting when no-one was looking; the unusual muzzle on the .30-cal. is suspiciously similar... (Photos via Gaston Rodriguez and Belgian Military Archives) 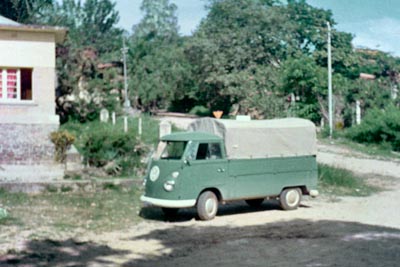 The CIA maritime unit operated out of Albertville for about two years, to intercept weapon shipments to the rebels. Most of the time the boat crews were mercenaries provided by 5 Commando, but for about six months there was also a group of exile Cubans. They did not get any 4x4 transport, alas, but had to make do with this rather less exciting VW Pickup, seen parked outside their house... (Photo © Manny Pichardo)

The flag of the Central Intelligence Agency seen at the top of this page carries the Agency's official seal, created in 1950.