For the first year after the Katangese secession, the United Nations tried to solve the situation through diplomacy and political pressure. But President Tshombe and his advisors ensured that there was little or no progress and the officials of the UN's Congo operation, ONUC, became increasingly frustrated as the months passed and the peace-keeping bill mounted.

In August 1961, an attempt was made to round up and expel all mercenaries and foreign political advisors in Katanga, since their removal would weaken the Katangese position. This operation was only a partial success, however, even if it succeeded in removing most of the Belgian officers on official secondment. It was followed by two more major ONUC military operations in the last months of 1961 and a final one starting late 1962, before the secession finally ended.

On 13 September 1961, after a period of increasing tension, fighting broke out in the Katangese capital Elisabethville (see the Congo map). ONUC made a new attempt to round up the remaining mercenaries and also tried to occupy various key locations in the city, in Operation "Morthor". But this time they met with armed resistance and for several days a low-key battle raged in Elisabethville and some other places in Katanga. A truce was called after the death of UN Secretary-General Dag Hammarskjöld in an aircraft crash in nearby North Rhodesia on 18 September. 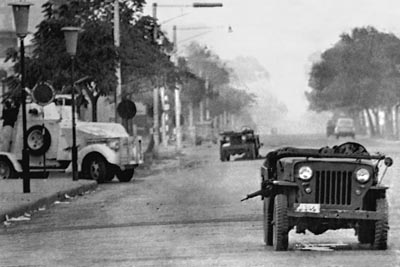 The main post and telegraph office in the center of Elisabethville was one of the major objectives of the ONUC operation and it became the scene of fighting for the first couple of days. These two Jeeps were part of a Katangese counter-attack that was stopped by machine gun fire from the ONUC armored cars on the left. (Photo © TopFoto ref.IPU420961) 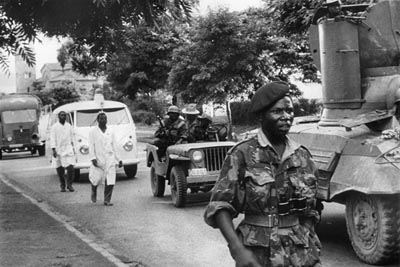 By the time the September fighting broke out, the Katangese forces were quite disorganized and operated in small ad hoc groups rather than in formal units. This column is a typical example, with an M8 armored car, an old CJ-2A or -3A loaded with soldiers and a Renault truck at the rear -- plus a civilian ambulance. (Photo via Daniel Despas) 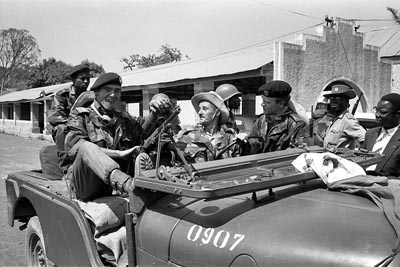 The mercenaries usually operated by themselves, perhaps with a few Katangese soldiers in support. These European volunteers at the Camp Massart barracks had a CJ-6 which they used to move around Elisabethville and harass the ONUC troops whenever an opportunity arose. (Photo © Terence Spencer) 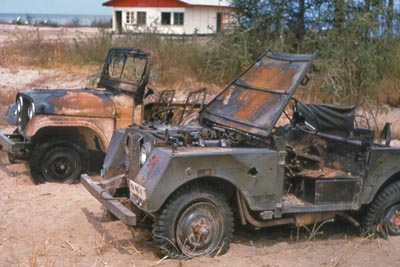 Katanga lost numerous vehicles in the skirmishes during the September fighting. This Minerva TT and CJ-6 were both set on fire during an abortive attempt to capture the airfield in Albertville, which was occupied by ONUC. In the background is Lake Tanganyika. (Photo © Olle Andersson)

Two months later fighting broke out once again, in what is usually referred to as "Round Two" between Katanga and ONUC. This time the Katangese were better prepared and had built up a command and communication structure of sorts. There were a number of small groups of mercenaries moving around Elisabethville in Jeeps but much of the fighting was done by Katangese para-commandos under native officers. The battle continued for several days in mid December 1961 before a new truce was agreed. 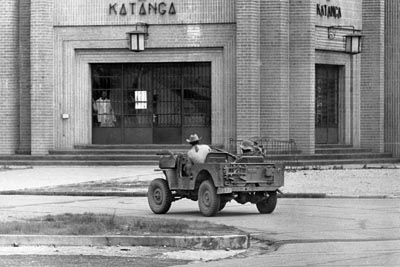 Two Katangese soldiers tear through central Elisabethville in a CJ-3B, seemingly armed only with an old Lee-Enfield rifle. Katanga was no longer able to import new equipment with the same ease as before and vehicles were once again at a premium. This Jeep is most likely from the colonial days and has the typical storage bin at the rear -- squashed flat after backing into a wall, it would seem. 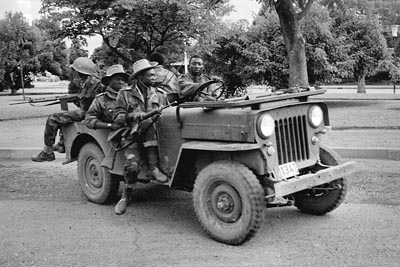 This CJ-3B was used by a Katangese mortar team in Elisabethville. They would drive to a suitable location, set up their mortar and fire off a few rounds, and then quickly pack everything up in the Jeep and relocate before ONUC could respond. The team had a radio to get target information from the spotters located around the city. The Jeep is clearly ex Force Publique since it has the tell-tale L-shaped indicator lights on the front.

A second photo (230K JPEG) shows the Jeep from the rear quarter. The mortar tube is clearly visible, sticking out the back, while one of the team members is holding the mortar legs. (Both photos © Terence Spencer) 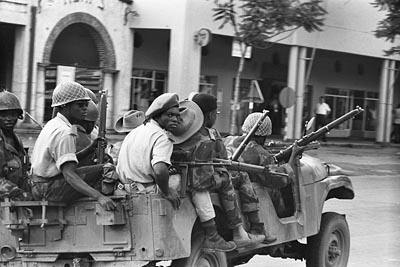 There was considerable wear and tear on the Katangese Jeeps over time, as is evident on this CJ-6 in use in December 1961. This was a vehicle likely no more than a couple of years old but even so it was already comprehensively dented, all rear lights were gone, the tailgate seems to have been both welded and bolted shut for good measure, and there was clearly something seriously wrong with the suspension. But... it still worked. (Photo © Terence Spencer) 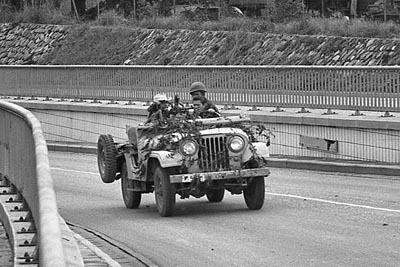 With its normal supply chains no longer functional, the Katangese forces increasingly had to get its equipment wherever and however they could. These mercenaries coming out of the notorious "tunnel" in Elisabethville -- the scene of heavy fighting -- are using a CJ-5, a type not normally seen in the Katangese forces. The Jeep is fitted with a Bren machine gun and is artfully camouflaged with branches but despite this it actually carries a civilian licence plate; it was presumably bought or "borrowed" locally, or perhaps donated by a supporter of the regime. (Photo © Terence Spencer)

The result of the December 1961 campaign by ONUC was that the Katangese in effect lost military control of their capital Elisabethville. They still controlled most of the Katangese "heartland" in the western part of the province and here they restructured their forces. New mercenary units were created, but by this time the Land Rover had become the vehicle of choice and Jeeps played only a marginal role for the final year, before a final ONUC offensive ended secession in early 1963 (see Part 8). 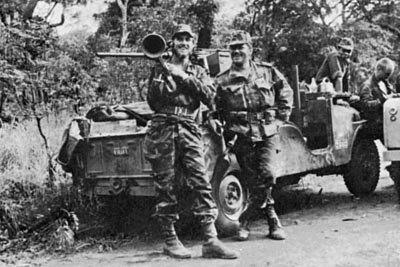 Some Jeeps inevitably survived the numerous Katangese campaigns in the first year and a half, and this CJ-6 was still in use with the new mercenary formation known as Groupe Noir (Black Group) in 1962. The Jeep armament had been upgraded to a .50-calibre machine gun by this time. On the right is one of the Land Rovers that made up most of the group's transport. 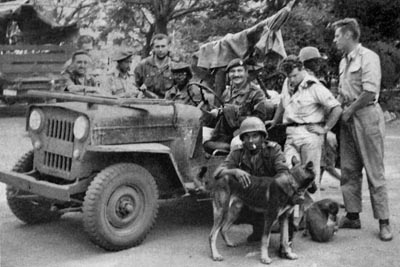 Even towards the end of Katanga, the odd CJ-3B could still be seen in service. Most likely belonging to Groupe Vert (Green Group) under Jean Schramme, this Jeep shows no obvious sign of being a former Force Publique vehicle and may be a recent acquisition -- especially as it seems to have a Congolese civilian licence plate on the grill. There is nothing civilian about the shrouded machine gun mounted in the rear, though. Note also the small Katangese flag on the side, behind the fender. (Photo via Francois Pletain)

Continue to Part 6: ONUC Flatfenders or return to the Table of Contents.