The chaos that ensued in the former Belgian Congo in July 1960 caused the United Nations to send a peacekeeping force, known as the Organisation des Nations Unies au Congo (ONUC).

The UN's own records of United Nations Operations in the Congo state: "Originally mandated to provide the Congolese Government with the military and technical assistance it required following the collapse of many essential services and the military intervention by Belgian troops, ONUC became embroiled by the force of circumstances in a chaotic internal situation of extreme complexity and had to assume certain responsibilities which went beyond normal peacekeeping duties."(1)

Thirty-four different countries contributed personnel to the operation, and in mid 1961 ONUC troop strength reached its maximum of nearly 20,000. Its core was a number of infantry battalions provided by different countries, and in addition there were various specialized units that often included people of several nationalities. UN fatalities 1960-64 included 245 military personnel and 5 international civilian staff.(2)

The Jeeps used by ONUC included virtually all 4x4 versions produced up to that time: there was even the odd Willys MB, brought in from Norway in 1963. This leaves only the FC as being as yet undocumented in ONUC service!

ONUC was created very quickly and all its initial units were flown in. Transportation was scarce and much of ONUC's initial vehicle fleet was scraped together from what could be obtained locally, with a few additional deliveries by air. This was reflected also in the Jeeps used in the beginning.

ONUC at first took over many vehicles that belonged to the Congolese Army, the ANC. There was no real justification for this but presumably many of them were found abandoned and were simply "borrowed". Early ONUC policy for Jeeps seems to have been, "if it rolls, commandeer it!" 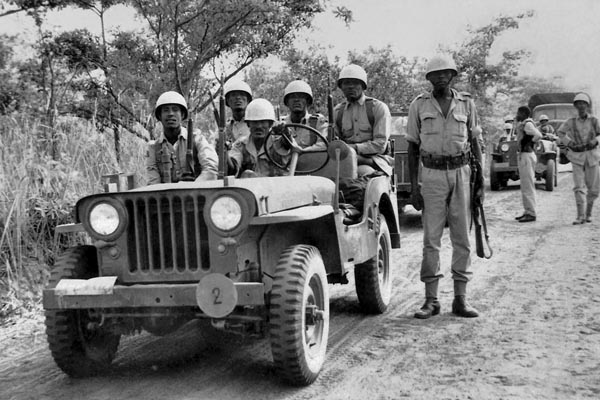 These Ethiopian ONUC soldiers in Katanga are using Jeeps still with Congolese military plates on them. For political reasons, the UN preferred to use African troops and the Ethiopians were among the very first to arrive, only days after ONUC was created in July 1960. The first Jeep is most likely a CJ-3A, followed by a CJ-2A (judging by the windshield glimpsed behind the soldiers) and then a CJ-3B. (Photo via J-P Sonck) 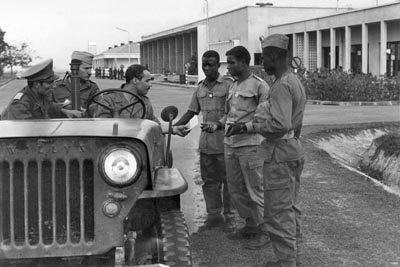 The Tunisian UN troops checking the IDs of Congolese soldiers in Luluabourg (see the Congo map) in this 1960 photo are clearly also using an old Belgian colonial CJ-3B, as evidenced by the L-shaped indicators on the front. The Jeep has a machine gun mount and lacks a windshield, so may have been a former Recce Squadron vehicle (see Part 1.) (Photo Belgian Military Archives) 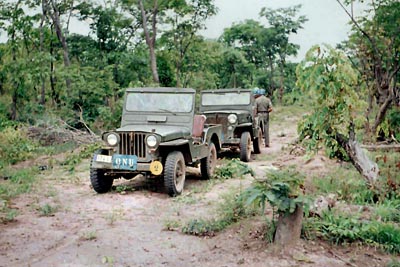 Two more former ANC Jeeps -- a CJ-3A and a 3B -- in UN service, this time with a Swedish detachment patrolling near Kasenga on the Northern Rhodesia border, around September 1960. They have at least added large "ONU" placards but the Jeeps have not yet been repainted the usual UN white. These "borrowed" Jeeps may have been returned to the ANC in due course but just as likely they were quietly relegated to second-line use at the ONUC bases. (Photo © Tommy Nilsson) 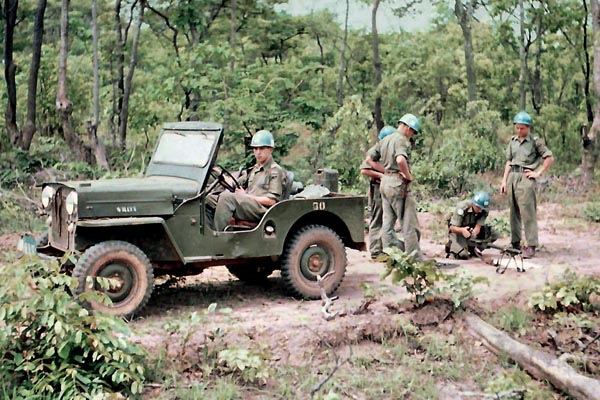 Most likely the same CJ-3B as in the previous image, at a make-shift target range set up in the bush. The Swedish soldiers are preparing a machine gun m/42 (a Swedish version of the Browning .30-cal.) for firing. The Swedes were one of the few contingents in ONUC to have only marginal experience of the Jeep in any version from back home, since the Swedish Army traditionally favored domestically produced vehicles. (Photo © Tommy Nilsson) 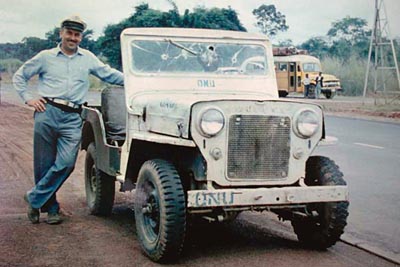 Austria was another country contributing only non-combat contingents to ONUC. This included a small group of police officers who worked for ONUC Headquarters in Leopoldville in 1960. Here Inspector Chvost is visiting the provinces in a CJ-3B that has seen better days. From the half white, half olive green paint job it is likely a former ANC vehicle "found" by the UN. Note also the bullet holes in the windshield. (Photo courtesy Öffentliche Sicherheit.) 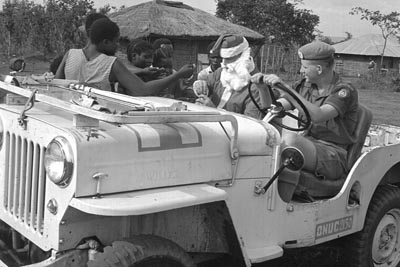 Canada had no peacekeeping troops in the Congo, but its No.57 Canadian Signal Unit handled most of the radio communication for ONUC. Among their vehicles was this CJ-3B of unknown origin: one of the few seen in full UN markings. Here unit members are visiting villages near Leopoldville to give out candies and gifts at Christmas 1963. The Jeep was driven by Private Kenneth Goble, with Corporal Maurice LeClair as Santa Claus. (Canadian Army photo)

The biggest user of early CJ versions within ONUC was otherwise the Indian contingent (see Part 8). In addition, some were used by the ONUC air units (see Part 9). 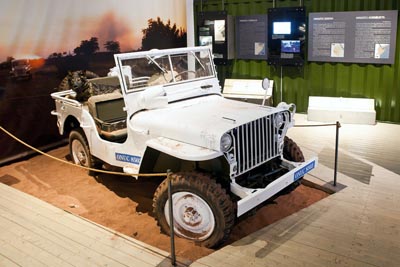 The only unit known to have used Willys MBs was the Norwegian anti-aircraft battalion that arrived in early 1963, bringing its own vehicles from home. This very early MB on display at the Armed Forces Museum in Oslo is painted white to represent an ONUC Jeep but in reality all AA battalion vehicles probably remained Olive Drab; see the Jeep just visible on the far right in an additional photo from the Kamina area (180K JPEG). (Photos © Forsvarsmuseet and Ingemar Eriksson, respectively.)

A Trickle of M38s

During the early days of ONUC, small numbers of military M38 Jeeps also found their way into UN service. Since none existed in the Congo before independence, it is most likely that these examples were brought in by some of the ONUC contingents from their home countries. Once the UN brought in Jeeps of its own and provided these to the units, the M38s may have been shipped back to where they came from. 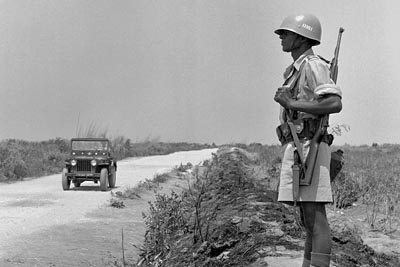 An M38 passing an Ethiopian soldier on guard in Katanga in August 1960. The Ethiopians at first had some troops at the Kamina base in Katanga but later they mainly operated in northern Congo. The M38 is marked "ONU" on the front bumper but, as it is not painted white, was not provided by the UN itself. Since Ethiopia is a confirmed user of the M38, the Jeep was no doubt brought in by them. (Photo UN Multimedia no.189895)

For comparison, see this M38 in Ethiopia (140K JPEG), used to carry a lion around on its hood during a parade the same year, 1960. The lion had great symbolic meaning in Ethiopia and Emperor Haile Selassie was (among other things) titled The Lion of Judah. 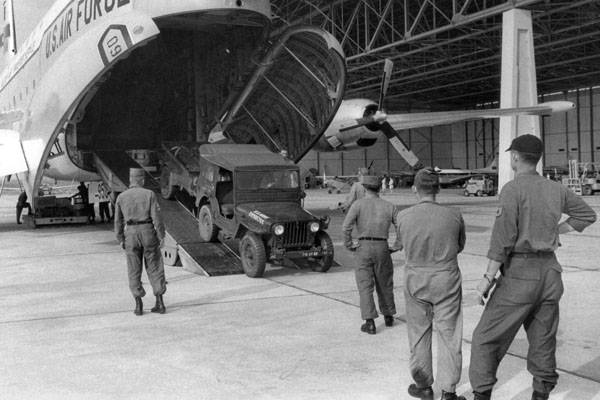 It is possible that ONUC also acquired the odd M38 from those brought directly to the Congo by the US forces. They may for example have taken over one or more of the few Jeeps brought into the Congo as part of the US communication support to ONUC, such as this US Army M38 unloaded from a US Air Force C-124 at N'Djili airport in Leopoldville in July 1960. 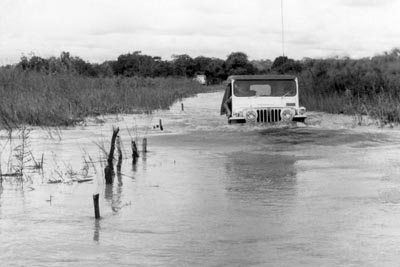 An ONUC Jeep travelling down a "road" in the Katanga province. The blackout light and the guard wires over the headlights reveal that this, too, is an M38 rather than a CJ-3A. Its provenance is unknown, and there is no indication what unit it belonged to. However, the overall white color suggests that it was UN property, rather than belonging to one of the national contingents. (Photo © Stig von Bayer)

In addition to its "traditional" Jeeps, ONUC also had a fair number of Willys Jeep Trucks (in pickup and stake truck configurations) as well as Willys Jeep Station Wagons (both utility wagons and panel vans). These were used for all manners of duties, not always only in the second line. 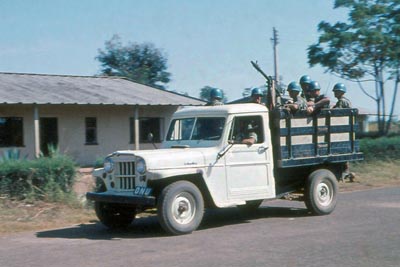 The makeshift "ONU" sign and lack of registration on this particular stake truck in Elisabethville in 1960 show that this is an early acquisition, before ONUC got all its procedures in order. The two-piece windshield shows it was produced in 1959 or earlier. It was one of a handful of similar trucks fitted with a machine gun (a Swedish m/42) and used for patrols, probably making these among the few armed Jeep Trucks anywhere in the world. (Photo © Tommy Nilsson) 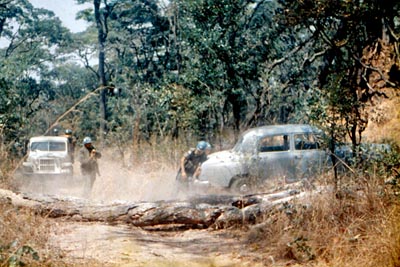 The Jeep Truck was by no means the most unlikely patrol vehicle used in the Congo in the early days, however, as the adjacent shot of a late 1950s Mercedes sedan in the Katanga bush shows. The Swedish soldiers having to manhandle it no doubt had strong views on its suitability for the task! (Photo © Stig von Bayer) 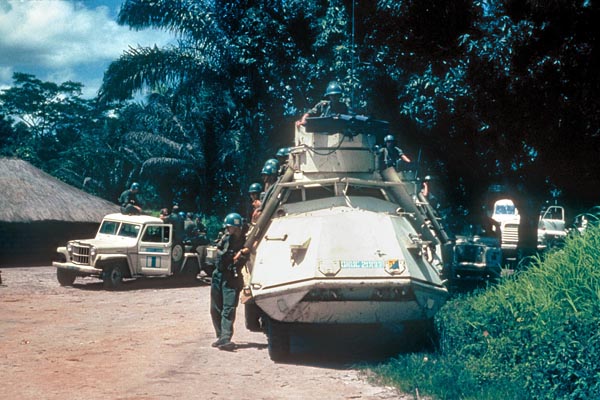 ONUC continued to make use of Jeep Trucks in first-line units as seen from the pickup on the left in this view from 1961 or 1962. It has full ONUC markings. Nearest the camera is one of the Swedish Scania m/42 SKPF armored cars used by ONUC in Katanga and behind it is a Landrover and a Bedford truck, both also fairly common in ONUC service. (Photo © Hans Wahlman) 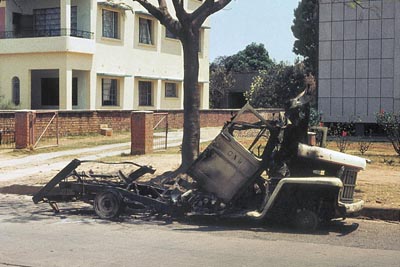 On the evening of September 14, 1961, an Irish patrol was ambushed by a Katangese force outside the Radio College on Avenue Wangermee in Elisabethville. Two armored cars and a bus were lost, together with this Jeep Truck. The Jeep crew managed to bail out before the vehicle was blown up by a bazooka round and set on fire. Since there is no trace of a pickup body, this was likely a stake truck and the cargo body was completely consumed by the flames. (Photo via Jean Kestergat) 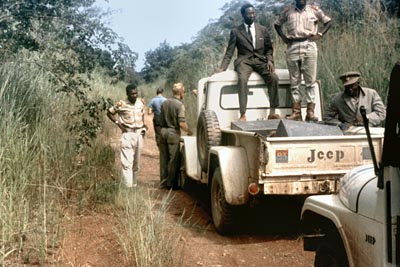 Soldiers from ONUC and Katanga occasionally carried out joint patrols during periods of reduced tension between the two sides. This Jeep pickup and CJ-5 were likely out on such a patrol when the pickup suffered some kind of breakdown, judging from its open hood. The man in the suit is presumably a local official catching a ride somewhere. (Photo © Stig von Bayer) 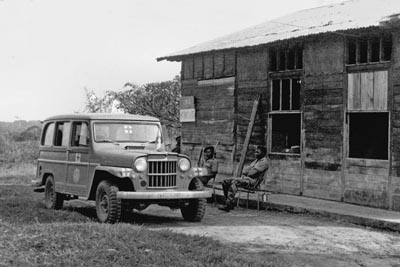 The Jeep Station Wagon was much less common in the Congo but could be spotted on occasion. This utility wagon was pressed into use as a temporary ambulance, judging from the makeshift red cross markings. The flat windshield shows it was a 1960 model or later. It was parked in front of the equally makeshift ONUC headquarters in Kikwit (see the Congo map) in the spring of 1964, during the first phase of what would become known as the Simba rebellion. The bored soldiers are guards from the Congolese Army, the ANC -- which is not known to have used any Jeep Trucks or Station Wagons. (Photo © Stig von Bayer) 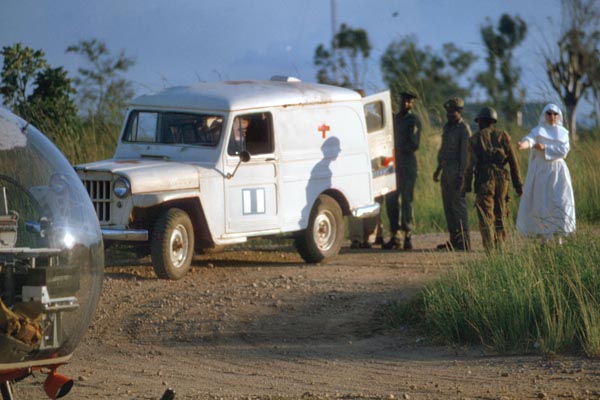 Not all ONUC Jeeps fell into immediate disuse once the UN left the Congo. This panel truck ambulance was probably donated to the hospital in Albertville, or "rescued" by them on the departure of ONUC, but retained its UN markings. It was used in 1965 to ferry wounded soldiers from the helicopter landing ground when they were brought in by the CIA operated Bell 47 rescue helicopter (on the left). The nun was part of the hospital staff; most medical facilities were still run by various missions at this time. (Photo © Bob Houcke)

Most Jeeps used by ONUC were not flatfenders, however, and CJ-5 and -6 versions and their story are covered in the next part of this series.

Continue to Part 7: ONUC Round-fenders or return to the Table of Contents.