The former Belgian Congo is an interesting case study when it comes to military Jeeps. The country was never among the largest markets for Jeeps but the vehicles were put to a great variety of uses under very trying circumstances. This series of web pages will attempt to chronicle the story -- particularly when it comes to the CJ-3B but also for other versions of the Jeep. 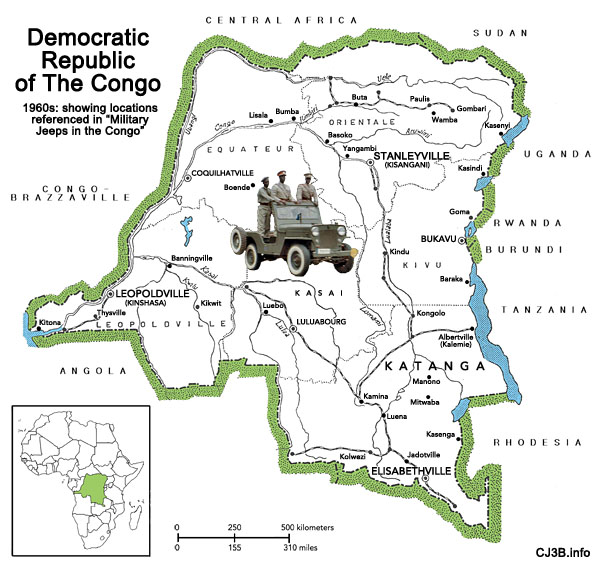 For much of the first half of the 20th Century, Africa in general and the Belgian Congo in particular were considered exotic and mysterious locales for most people in the West. Steaming jungles and screaming cannibals were assumed to be the norm, for those reared on Tarzan movies.

The reality was of course more complex and the Congo was a great mix of old and new at independence in 1960, even if life in the villages had changed little since pre-colonial days. The roads were always poor even by most African standards and the Jeep therefore played a part in both the colonial army (see Part 1) and the Belgian colonial administration (see the Appendix covering civilian Jeeps), as well as the first decade after independence. 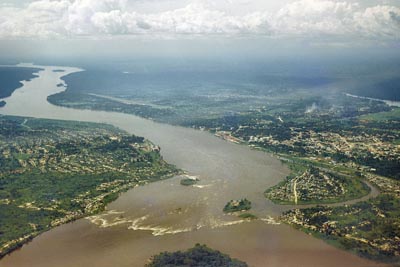 This is Stanleyville (later renamed Kisangani), the largest city in the Congolese interior and a long way up the Congo River from the capital Leopoldville (now Kinshasa). Joseph Conrad in his classic story Heart of Darkness called it "the inner station." It was the scene of many of the important events in the country after independence. In the mid 1960s, the city was the base for army operations in northern Congo and housed a modification center for newly arrived military Jeeps. (Photo © Jan Hekker) 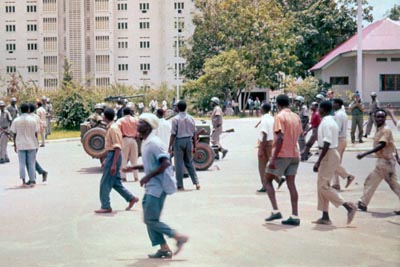 Immediately after independence, the Congo was thrown into political and economical turmoil and the new army (see Part 2) mutinied throughout the country. Most Belgians in the administration left, and two of the richer regions -- Katanga and South Kasai -- declared themselves independent.

Here a group of Congolese policemen gets assisted by some gendarmes in their armed CJ-3B Jeep, who have turned up at a trouble spot in the capital Leopoldville in July 1960. (Photo © Robert Gustavson) 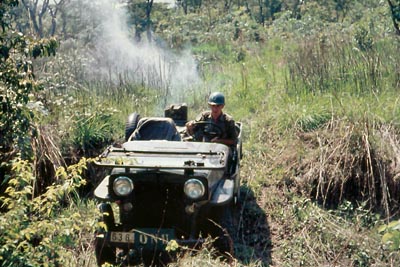 The Congo was in danger of becoming yet another theater of the Cold War, and to prevent this the United Nations sent in a large military force, ONUC (see Part 6) which stayed for four years. ONUC was engaged in general peacekeeping duties but in due course spent much of it energy on a conflict with secessionist Katanga (see Part 3).

This Swedish UN soldier is driving a CJ-3B taken over from the Congolese army. (Photo © Tommy Nilsson) 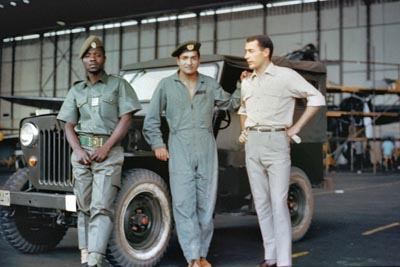 In 1964 a major rebellion broke out in eastern Congo and the army quickly showed itself unable to cope. White mercenaries were therefore brought in to spearhead the counter-offensive (see Part 11). This brought military victory but further political problems, and Congo became a low-key Cold War theater after all. Among other actors, the American CIA (see Part 15) carried out some para-military operations in the country.

A Congolese soldier poses with a Colombian CIA pilot and a civilian in front of an M606, the most common Jeep version in the Congo at the time. (Photo © Jan Hekker) 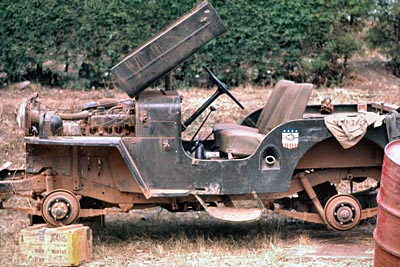 The foreign mercenary force would eventually turn into a problem on its own, when the time came to disband it in 1967. A group of mercenaries mutinied (see Part 16) and were besieged in the town of Bukavu, before eventually giving up and leaving the Congo. After this there was peace in the country for some decades, even if the economic problems continued unabated. (Photo © Marion Kaplan)

This mercenary M606 up on blocks in 1967 can represent the decline of the Jeep in the Congo from that date. (Photo © Marion Kaplan)

The photos used in "Military Jeeps in the Congo" have been collected from numerous sources over a long period. The author has, in spite of all actions taken, not been able to trace the origin of some of the images. Should the rightful claimants recognise themselves in these photographs they can contact leif@leifhellstrom.com.

Special thanks to those who have provided images and information over the years, in particular Jean-Pierre Sonck and Michel Huart in Belgium.

Continue to Part 1, or return to the Table of Contents.

Thanks to Leif Hellström, for researching and writing this extensive series of articles, and for collecting and providing the archival photographs. Thanks also to those listed in the photo credits who provided Leif with material from their collections. -- Derek Redmond