This fairly rare U.S. Army CJ-3B has had a few owners. Craig Carlile began a complete restoration of the Jeep while he owned it, but as of April 2011 he had to sell it because of other committments.

One former U.S. Army mechanic has stated that the Army bought several hundred CJ-3Bs in 1964. However, the contract number appearing on the dashboard plate of surviving examples is the same as that on the more commonly seen 1964 U.S. Navy 3B, so it's not completely clear how many Jeeps may have gone to each service branch. 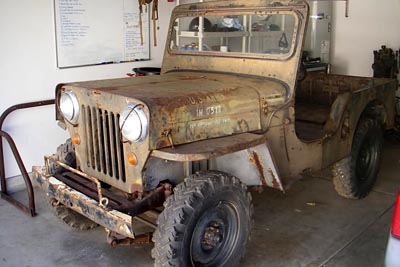 This Jeep is a CJ-3B, not an M606, although it does have some of the features which are part of the M606 package, including trailer electrical connection, rear bumperettes and pintle hook. It does not have appear to have had the blackout driving and tail lamps. The headlight guards are a distinctive military feature, but were not specified for the M606.

The chrome headlight bezels used on the civilian 3B were not modified for this military contract or for the M606. 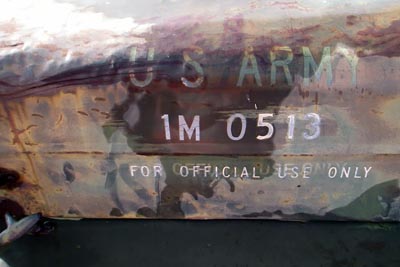 The Jeep was originally painted with the OD14087 gloss version of Olive Drab, which still showed gloss in some hidden areas. Craig provides the measurements for the lettering on the hood: 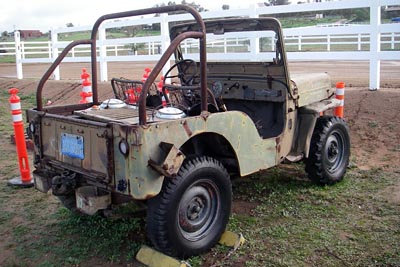 The serial number is 8105 124849. As Craig purchased it, and as the Jeep appeared on CJ3B.info for a few years, a roll bar had been added and the front grille lay in the back. 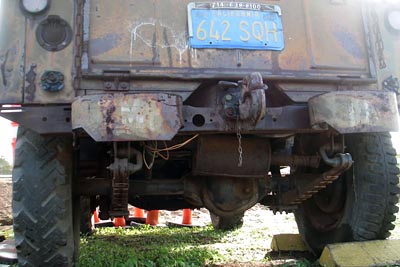 A couple of layers of markings were found on the rear bumperettes, including apparently the letters "TMP" and the number 18. Wes Knettle comments, "I'd say the Jeep was managed by an Army post 'Transportation Motor Pool' and it was vehicle number 18." 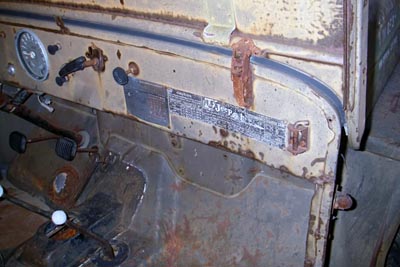 The nomenclature plate (170K JPEG) on the dashboard does not identify the "supply arm or service maintaining vehicle," which supports the theory that Jeeps procured under this contract with Kaiser Jeep would be split in an undetermined way between the Army and Navy. The serial number 124849 found on this plate also appears on the VIN plate on the firewall, and stamped on the frame.

Markings on the inside of the windshield say "MPH 45" (which was 5 MPH slower than sailors were allowed to drive the Navy Jeeps.) 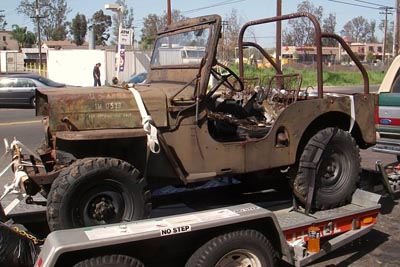 Craig loaded the Jeep on a car hauler to get it back to his garage to start the restoration. (He had initially tried to get it onto a smaller trailer (130K JPEG) but had a clearance problem.) As of late 2010 he has repaired and painted the frame, done extensive bodywork, and opened up the engine.

Thanks to Craig for the photos. As of April 2011 he has had to sell the Jeep. -- Derek Redmond