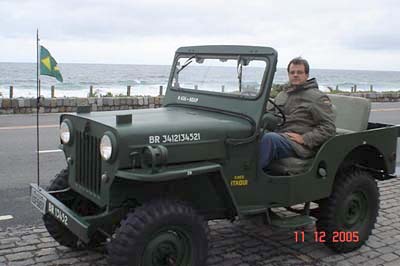 For a long time I have wanted to own a Jeep, and at the beginning of 2005 I became determined to make it happen. After having looked at a number of Jeeps, mainly civilian vehicles, I realized that the CJ-3B was different. At the beginning the design did not appeal to me; however it had something special, unique. Deepening the research, I found CJ3B.info, and there I got to know the M606.

Then, at the beginning of March 2005 I saw a Kaiser M606, apparently in good condition. The opportunity to purchase it was excellent. On April 7th, a Thursday, I took the Jeep and drove it to the garage of my parents' home, where I was photographed with my father and mother (70K JPEG). There was a lot of work to do before I would have my picture taken again in December at Reserva Beach (right) in Rio de Janeiro. 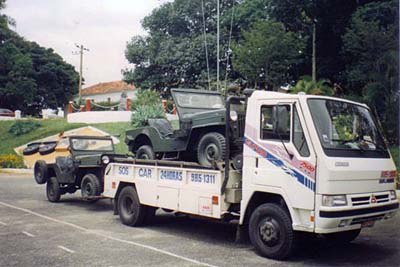 The Jeep was a 1966 Kaiser M606, serial number 8105 137751, engine number 4J346713. It left the Brazilian Army in December 1996, more specifically the 1st Squadron of Mechanized Cavalry -- Squadron Tenente Amaro, located in Valença, Rio de Janeiro. This Squadron is famous because it is the Squadron of the Brazilian Expeditionary Force that fought in Italy during World War II. This photo shows the moment of the sale of the vehicle as surplus by the Army in 1996; it's the one on the truck.

From 1997 to 2004 the car was practically motionless and thus was never registered. The task of obtaining its first plate was mine. 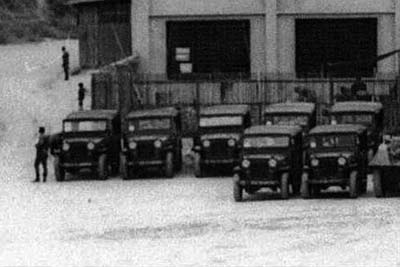 The M606 was a vehicle much used by the Brazilian Armed Forces. Some Jeeps of the Squadron Tenente Amaro, at that time called 1st Squadron of Mechanized Reconnaissance, are seen here in operation in the State of the Espirito Santo between 1970 and 1972. 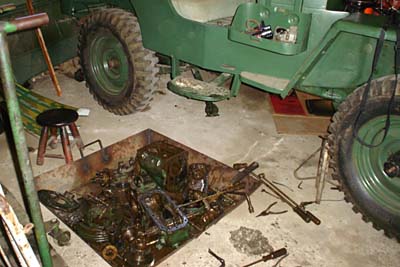 The restoration process started on April 13th, when the car was towed to the garage (70K JPEG), and ended on December 3rd. The idea was to keep it as original as possible. To reach this goal it was necessary to make a complete check list of the parts that were missing (I used CJ3B.info a lot), and to do a complete rebuild of the electrics and mechanicals, as well as the necessary frame and body repairs.

The brake system was rebuilt, including the brake hose guard. The spare wheel bracket, which was inadequately mounted on the tailgate (70K JPEG), was correctly installed in the side of the vehicle. The electrical system (70K JPEG) was totally replaced, as well as the Dana T90 transmission (70K JPEG) and transfer case (right). 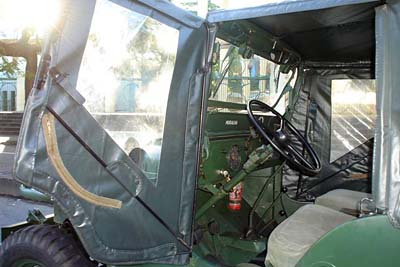 All the things that I bought were original, including Kelsey Hayes wheels, Sparton horn, speedometer (in kilometers) and bumperettes. The original-style six-piece top (70K JPEG) is in vinyl, and covers a 13-piece framework (100K JPEG). The use of a canvas top (110K JPEG) on "V-style" bows the same as the ones on the M38, was also common.

It was necessary to acquire 700 x 16 military tires, a NATO key (the one that came with the car did not function anymore), a military taillight (Auto-Light) and a fuel tank. The rifle rack (80K JPEG) used by the Brazilian Army for this type of vehicle was also installed. Unfortunately, the front parking lights and the starting motor aren't original yet. 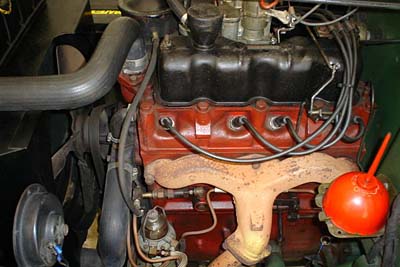 The body repair (70K JPEG) was a lengthy job, but the final result was good. Finally, a general retouching of the painting and the markings (70K JPEG) of the vehicle was done. 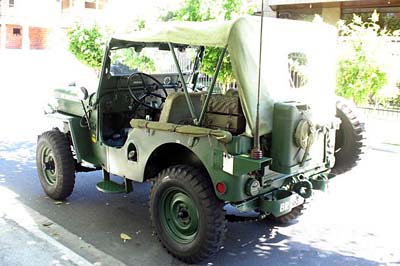 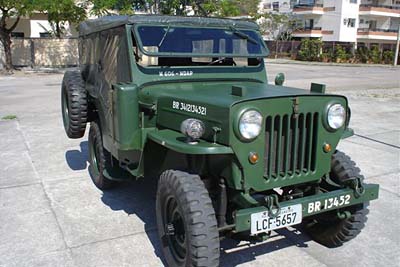 This model of Jeep is sometimes referred to in Brazil as "horse face", "Spartan simplicity", and "face and force of horse". What all these references mean is that no other Jeep united so well all these qualities: equipment simplicity, speed, force and durability, all undisputed attributes. 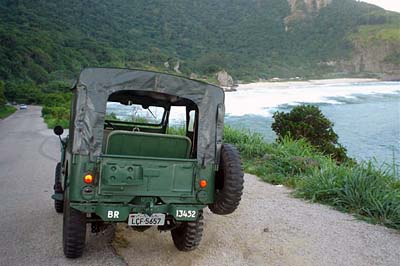 Here you see my Jeep parked at Grumari beach in Rio de Janeiro. I am a member of CVMARJ -- Military Old Vehicles Club of Rio De Janeiro -- where frequently we organize meetings of military vehicles (100K JPEG).

I'm also very grateful to CJ3B.info which helped me a lot, and I appreciate the chance to contribute to the knowledge of the use of the M606 by armed forces around the world, specifically by the Brazilian Army in the period from 1966 to 1996. -- Marcos Muralha

Thanks to Marcos for the story and photos. As of 2012, the Jeep has been sold and repainted. -- Derek Redmond