Here are some more photos taken by U.S. military personnel in Vietnam, which capture both the horror and the lighter moments of the war, and which happen to include high-hood Jeeps. Most of the pictures show only part of a Jeep, but are interesting for how they document the close connection between these soldiers and their 1/4-ton utility vehicles. 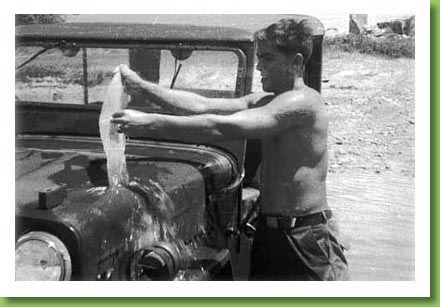 The Jeep that Ed Blanco is washing in a river near Ham Thuan in 1968 is an M606 built by Kaiser Jeep in the U.S. -- the one-piece windshield and chrome headlight rings differentiate it from the Japanese-built Mitsubishi CJ3B-J4's often seen in Vietnam. The photo was taken while Blanco was working for Military Assistance Command, Vietnam (MACV) as an advisor to South Vietnamese forces, so the Jeep is probably not U.S. Army. 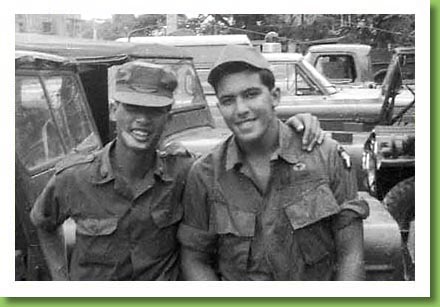 Another picture from Ed Blanco's diary finds him in Phan Thiet with a South Vietnamese Lieutenant. Immediately behind them is a Mitsubishi J4 (split glass windshield) and behind that is a Kaiser M606 (one-piece windshield, hood blocks and chrome headlights). Interesting to see the two types of high hoods apparently in the same unit. It looks like this could be the motor pool, and in the background with the beacon light is maybe a J-series Jeep pickup. 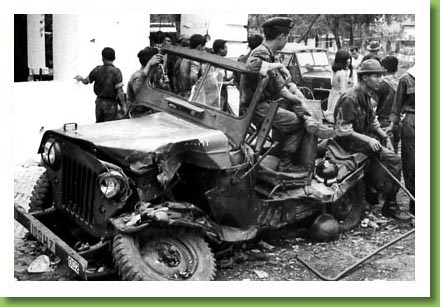 Other photos demonstrate that war can turn ugly very quickly, and Jeeps don't offer a lot of protection when you're in the thick of it. This picture of a Jeep damaged by a bomb in Saigon during the coup on November 1, 1963 was taken by Colonel Lee Baker who served as the Military Spokesman and Chief Information Officer for MACV from April 1963 to May 1965.

The photo comes from the Lee Baker Collection in The Vietnam Archive at Texas Tech University. 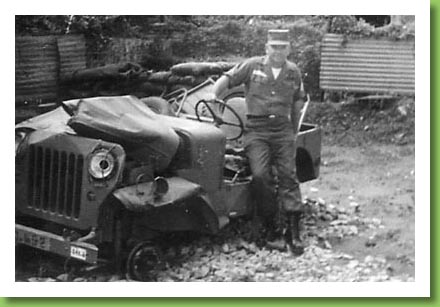 A photo from The Delta Dragon shows Sgt. Reuben Ritter posing on a Jeep destroyed by a mine, about three vehicles in front of him in a convoy. This was early in the American involvement in the war, 1963/64 in Soc Trang.

The headlight guards clearly identify this as a Mitsubishi military Jeep, and the bracket for a lifting shackle on the front bumper indicates it's a J4C which was the heavier-duty version with 24-volt electrical system. 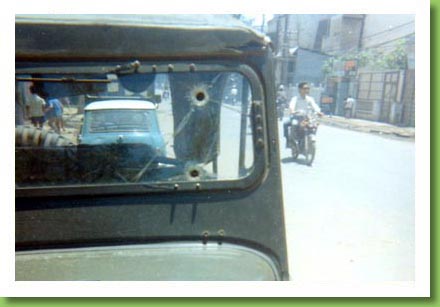 This undated photo of an M606 in The Vietnam Archive is described as showing a "Jeep after ambush -- driver killed -- from Delta Combat Asst. Teams." 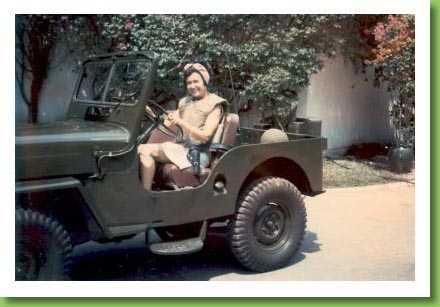 Another undated photo, with no identifying information, comes from the Admiral Elmo R. Zumwalt, Jr. Collection in The Vietnam Archive. The Admiral's files contain many pictures which he didn't take himself, so it's hard to know in this case. You could speculate that this is the wife or friend of an officer, posing with his flak jacket, sidearm and helmet. Morihisa Ochi points out this Jeep appears to be an American-built M606 with a Mitsubishi J4 windshield. 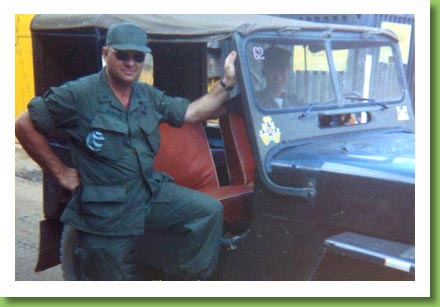 Unfortunately we don't know the source of this photo of a U.S. officer with a Vietnamese Jeep and driver. The Jeep again looks like an M606 with J4 windshield, and has been dressed up with mudflaps on all four wheels, insignia on the windshield, and red upholstery on the seats. 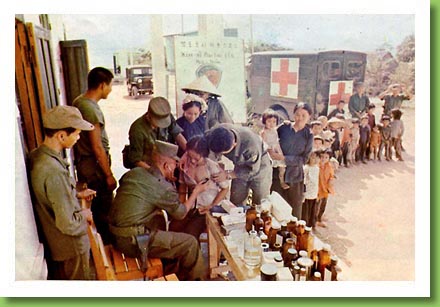 This photo from Jae S. Chung shows one of the "Daihan Baksi" (Korean Doctors) administering medical aid in a Vietnamese village circa 1968. Members of a civic medical treatment team of Korea's Tiger Division operated mobile dispensaries as part of an effort to gain support in Vietnamese villages.

The CJ-3B in the background may or may not be part of the R.O.K. team. 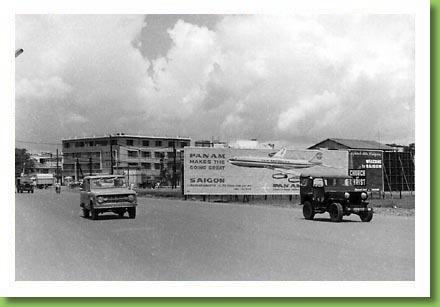 This Saigon street scene shot was taken near Tan Son Nhut Airbase in 1969, about five years before the fall of Saigon to North Vietnamese forces. It includes an ARVN J4 and a civilian Ford Bronco. There are several more Jeeps in the background, as well as the Pan Am billboard welcoming travelers to Saigon. (See a large copy of the photo, 80K JPEG.) 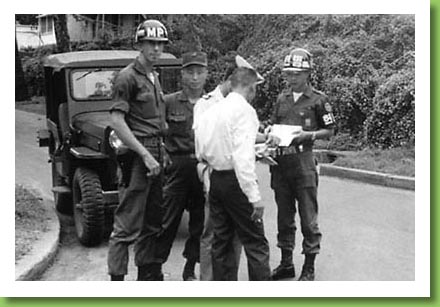 The combination of American and ARVN military traffic and civilian traffic on the same busy roads, inevitably meant traffic accidents that had to be investigated and reported by all appropriate police forces. Photo courtesy of Sung-Yung Choi and Military Police of the Vietnam War.

This appears to be a Willys CJ-3B, since it has chrome headlight rings, and a passenger-side spare tire mount rather than the tailgate mount usually found on the Mitsubishi version. 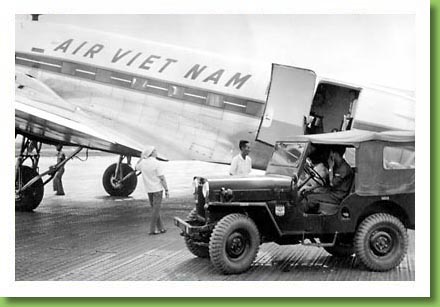 About 100 miles southwest of Saigon, in the Mekong River Delta, Can Tho Army Airfield was an extremely busy place during the war. Built by the French and improved by the Japanese in World War II, the airfield was the center for U.S. military operations in the Mekong Delta. Here an ARVN Jeep oversees the loading of an Air Vietnam DC-3 at Can Tho.

Photo by Robert R. (Bob) Payette, 13th Avn Bn (Delta) 1965. Elsewhere on the web, see The Delta Dragon for more photos from Can Tho.

Thanks to all the photographers, to The Vietnam Archive and to Luis Mariano Paz who located photos. -- Derek Redmond