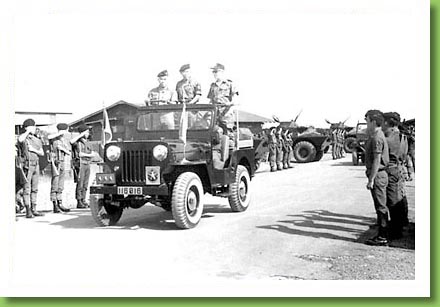 Here's a look at an interesting Jeep, thanks to an unknown photographer who documented the visit of a 3-star General in the Army of the Republic of Vietnam to a base at Duyet Binh sometime in the 1960s. He was apparently there to review Vietnamese special forces (60K JPEG) with their American advisers.

The General probably did a lot of reviewing, because he seems to have had a Willys CJ-3B custom fitted for the purpose, including front badges and flags, hubcaps and whitewalls, and a railing and stairway in the rear (see below). 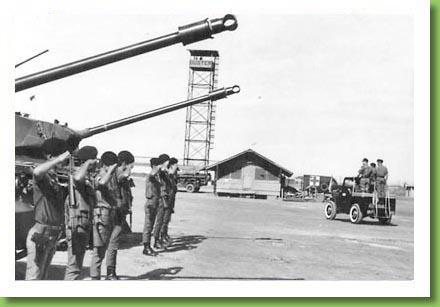 The pictures are good -- they look like they were taken by a experienced photographer, probably working for the military. And as well as making the troops look professional he gives us a pretty good look at what seems to be a civilian CJ-3B supplied by the American government.

The tailgate has been replaced by a set of stairs which may have folded up or they would make the vehicle pretty useless for other purposes. 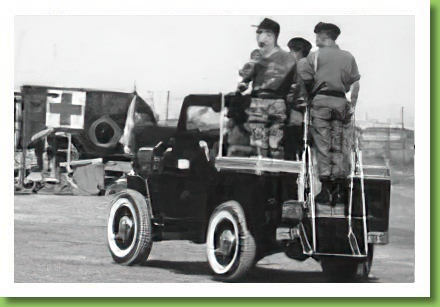 This rear view is enlarged from part of the photo above -- click it for an even more magnified view. Luis Mariano Paz notes that it shows a Kaiser government warranty sticker on the dashboard. Kaiser guaranteed the vehicle for 2 years or 24,000 miles in government use.

See a 1966 M606 in Argentina for details on the warranty sticker and how to order a reproduction. 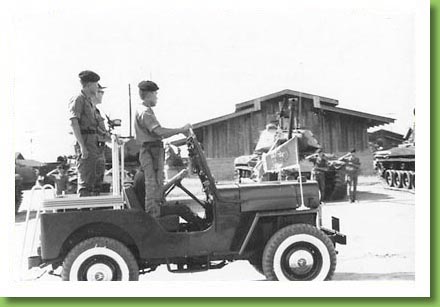 The rear bumperettes are the only feature typical of a militarized M606 Jeep -- everything else is plain civilian 3B with cosmetic additions. Can anybody identify the flag on the fender, or supply any other relevant information?

Thanks to Luis for finding the photos. -- Derek Redmond