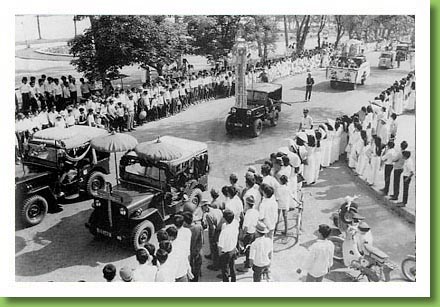 Morihisa Ochi provided this photo of a Buddhist ceremony in the ancient Vietnamese city of Hué ("hway") in 1968. Several of the vehicles in the parade are South Vietnamese CJ-3B Jeeps. Mori points out that the front row appears to be a Willys M606 and a Mitsubishi CJ3B-J4, while the center Jeep is an M606 with a J4 split windshield added.

The exact date is not given, but it seems to be prior to the Battle of Hué, so perhaps this is the lead-up to Tet, the lunar new year celebration. 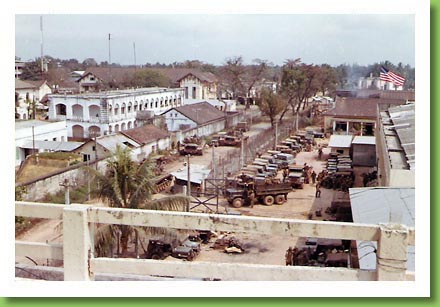 Brian Platzer referred us to some photos taken by several Marines from the 106 Recoilless Rifle Platoon, H & S Company, 1st Battalion, 1st Marines, 1st Marine Division, of the Battle of Hué during the 1968 Tet Offensive.

This is a shot of the MACV Compound in Hué, local headquarters for MACV (Military Assistance Command, Vietnam) which provided American support to the ARVN (Army of the Republic of Vietnam). At least 30 Jeeps are visible in the large copy of the photo (140K JPEG), most of them Mitsubishi J4 and Kaiser M606 high-hood Jeeps with either ARVN or U.S. markings. In case you think this is just the view from a sunbathing spot, see a slightly different angle showing a Marine defensive position on the roof (120K JPEG). 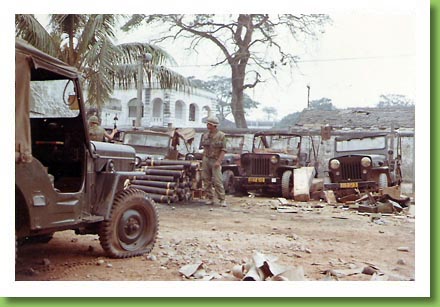 These Jeeps at the MACV Compound took a beating on 31 January 1968 when the North Vietnamese Army overran the lightly defended city at the beginning of the surprise Tet Offensive. An estimated 10,000 NVA and Viet Cong occupied most of the city and laid siege to targets including the Compound which was defended by MACV advisory staff. U.S. Marines were called in to rescue MACV and assist the ARVN in retaking the city, which they did in three weeks of intense house-to-house fighting.

Dave Jones sent this picture, and says, "Sorry about the condition of the Jeeps in the photo, but 82mm mortars and land mines have a way of scratching the paint on a vehicle." 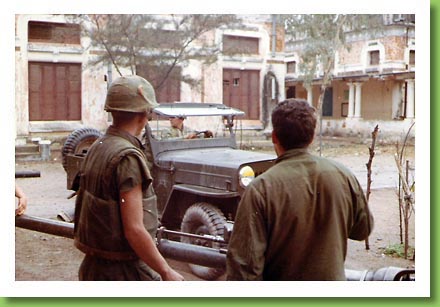 With Roger Morris and Dave Jones looking on, Jim Soukup maneuvers a Kaiser M606 with its ventilating windshield fully open, out of the way as they prepare to set up an M40A1 106mm recoilless rifle. Dave Jones says, "This Jeep was in good shape until it got hit by an RPG and a heavy machine gun (no one was in the Jeep at the time.)"

This recoilless rifle platoon of the 1st Battalion, 1st Marines was one of the first to arrive in Hué from their base at Phu Bai. Another photo shows their 106mm RR with 50-caliber spotting rifle (150K JPEG) under NVA fire. Jim Soukup is on the right, safely out of the Jeep. 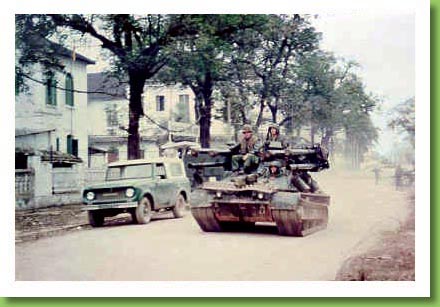 The 106mm RR, effective in taking out sniper positions, was one of the important weapons in the Battle for Hué. It could be mounted on a Jeep or Mechanical Mule, and the M50 Ontos (180K JPEG) had six 106mm RR's on a maneuverable carrier.

This picture by Alexander Kandic of the 2nd Battalion, 5th Marines, shows an Ontos speeding past a civilian Scout (*). The caption on the USMC Vietnam Tankers Association website says, "The Marine grunt battalion commanding officer felt that the Marine Ontos was a better weapon for city fighting than the Marine tank... because the smaller vehicle did not make quite as much noise as it roared down the streets and its six 106 mm recoilless rifles appeared to do more damage than the tank's 90 mm gun." 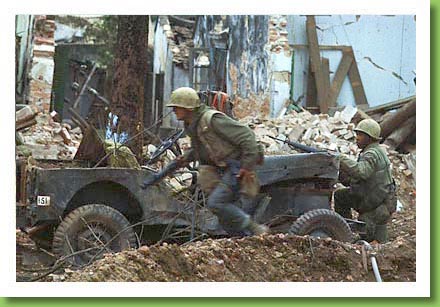 Its life as a vehicle over, an M606 provides some cover for Marines as fighting continues on 17 February 1968, in this picture taken by an unknown photographer. 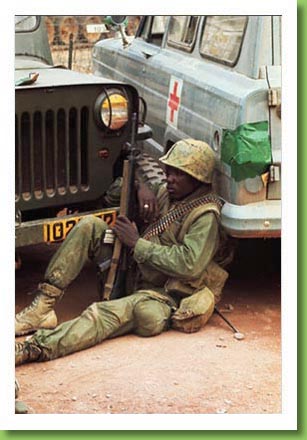 A Marine rests in front of a Mitsubishi J4C, leaning against what appears to be a Jeep Wagoneer serving as an ambulance, with improvised blackout tailights. This picture is dated 2 February 1968.

Wikipedia has a detailed description of the Battle of Hué which includes text from the websites of Time Magazine and the BBC. British photographer Don McCullin is quoted by the BBC: "The devastation I saw was incredible. I had never seen a city smashed to pieces like this, with naval gunfire and planes crashing down to rout out a few snipers. They told me it was once a beautiful city. Well, now it is an ugly city because the streets are littered with bodies that have been run over by tanks." 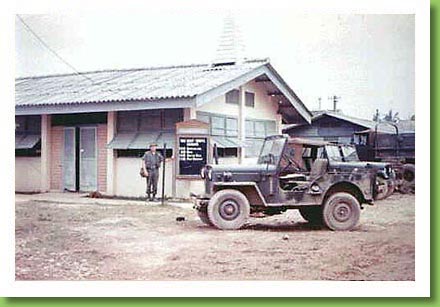 Protestant Chaplain Elden H. Luffman stands in front of the Chapel at the MACV Compound in Hué, February 1968. On a web page of Pictures by Chaplain Luffman, he comments: "My most difficult and hazardous ministry was certainly my year in Vietnam, 1967-1968, which included the Tet Offensive of 1968, and found me in the middle of the Battle of Hué City. But, that year was surely my most rewarding year of ministry." Another photo on that page shows him leading a worship service during a lull in the fighting in Hué (60K JPEG). 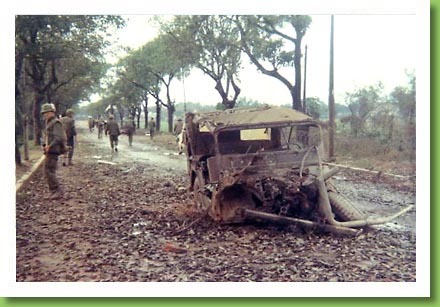 A last photo from the 106 Recoilless Rifle Platoon, taken as they moved toward the Perfume River which runs through Hué.

Some 200 U.S. Marines were killed and 1,500 wounded in the three-week battle, and the ARVN lost 450 dead and 2,000 wounded. Estimates suggest 4,500 North Vietnamese were killed, and a similar number of civilians were put to death by the NVA and Viet Cong. 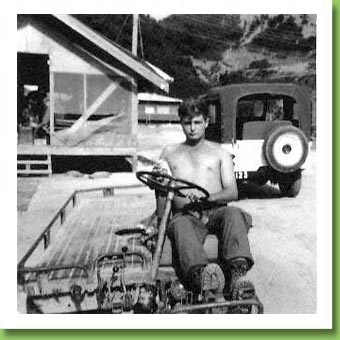 A few months later George Blankenship is seen relaxing on an M274 Mechanical Mule, the most basic Jeep ever built. According to Patrick Foster's Standard Catalog of Jeep 1940-2003, Kaiser/Willys built 4,618 of the 750-pound Mules from 1957-65. They were handy for carrying all kinds of things, including those 106mm RR's.

George was with a 106 platoon in H & S Company, 3rd battalion, 5th Marines, and this photo is captioned as having been taken while they were at Dai Loc Pass. 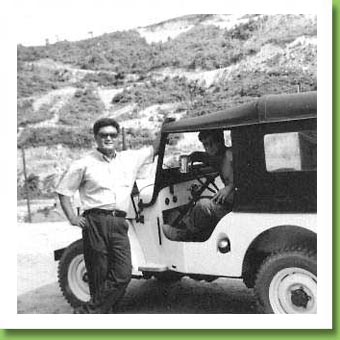 This one shows George trying out a civvy Jeep while at China Beach for some in-country R & R. The Jeep apparently belonged to a Korean Bible salesman.Brian Platzer says, "I found this interesting and amusing. The Bible salesman has class -- check out those sunglasses."

But it looks like George still has the same beer in his hand, and in the photo above it looks like the same Jeep in the background. So possibly the location in one of the captions is mixed up, or else that salesman was really working hard to sell George a Bible.

* The IH Scout with the white top is perhaps a CIA vehicle, according to a post by J. Andrews at the U.S. Militaria Forum: "In RVN, ICTZ at least, 1970-1971, IH Scouts were the hallmark of CIA. IIRC all had white tops and VN plates, with the bodies in beige, a mint-olive green and maybe an icy blue. I do not recall them driving them outside the urban areas."