Street scenes in Vietnam in the 1960s

There was death and destruction throughout Vietnam during the 1960s and early 1970's. Fatalities on each of the North and South Vietnamese sides in the war are estimated at close to a million, including 58,303 U.S. military personnel. (1) But everyday life also had to go on, and this page is devoted to pictures of Vietnamese street scenes where often the only sign of war is the occasional military vehicle.

South Vietnam's capital of Saigon was considered fairly safe from Viet Cong insurgents in the early 60's, but on Christmas Eve 1964 two Viet Cong operatives detonated a car bomb underneath the Brink Hotel, which was being used to billet junior American officers in the country in an advisory and support capacity. The explosion killed two Americans and injured approximately 60 people. That bombing, and the first penetration of the regular North Vietnamese Army into South Vietnam, were two events that made December 1964 a turning point in the war, and led to the arrival of U.S. combat troops. (2)

The Brink Hotel, also known as Brink's BOQ (Bachelor Officers' Quarters) was repaired following the bombing, and American officers continued to stay there until the fall of Saigon in April 1975. (3) 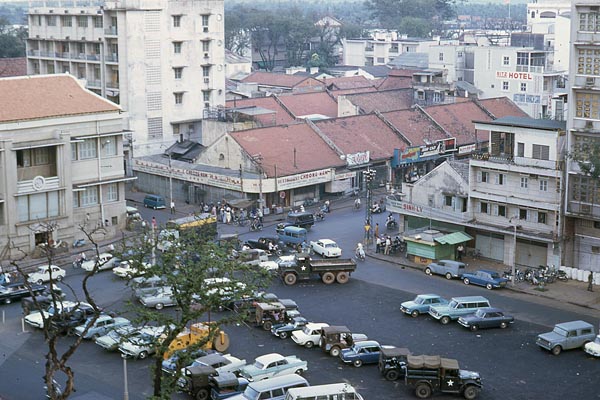 This detailed photo (400K JPEG) was taken from the Brink's BOQ rooftop restaurant by George Lane in 1969. (4) Probably many of the vehicles in the parking lot belong to Americans; mainly small European cars, although near the left side is what looks like a brand new 1969 white Impala.

There are six Jeeps visible, including a MUTT and an M38A1; chances are good that the rest are CJ-3Bs, but it's hard to see for sure. There's also a Jeep Wagoneer in the lot, and a Willys station wagon passing on Tu Do Street. 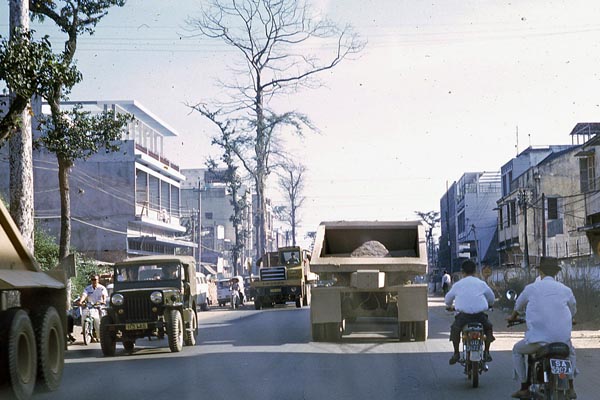 George Lane took this one from street level, also in 1969. (4) A Kaiser M606 with minimal South Vietnamese Army (ARVN) markings threads its way through construction vehicles, somewhere in Saigon. 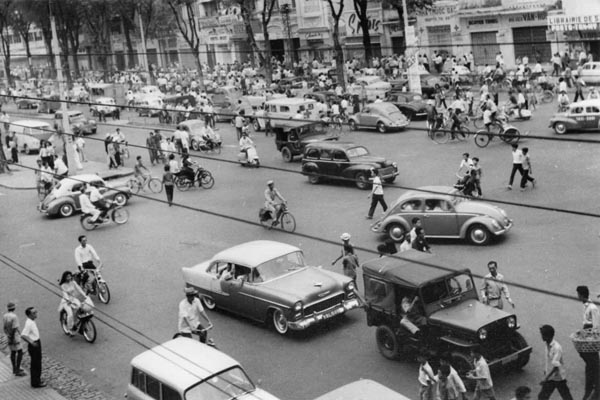 In the early 1960s, a military coup overthrowing the Saigon government was pretty much an annual event. This is Le Loi Street during the November 1963 coup, which laid siege to the presidential palace and executed President Ngo Dinh Diem. Photo from the George Krizansky Collection of the Virtual Vietnam Archive (5).

In addition to a couple of Mitsubishi CJ3B-J4's, this picture includes an ambulance which looks like it could be a Siebert Willys S.O.S. Ambulance (110K JPEG). 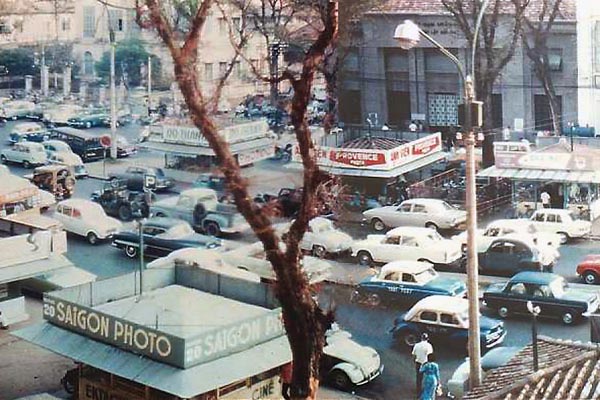 Bumper to bumper on Nguyen Hue Boulevard, Saigon, circa 1968. The wider version (180K JPEG) of this shot by an unknown photographer, includes a Wagoneer as well as a CJ-3B and a MUTT.

The picture was taken from the second floor of the Oscar Hotel, which as of 2015 is still a prominent hotel in what is now known as Ho Chi Minh City. 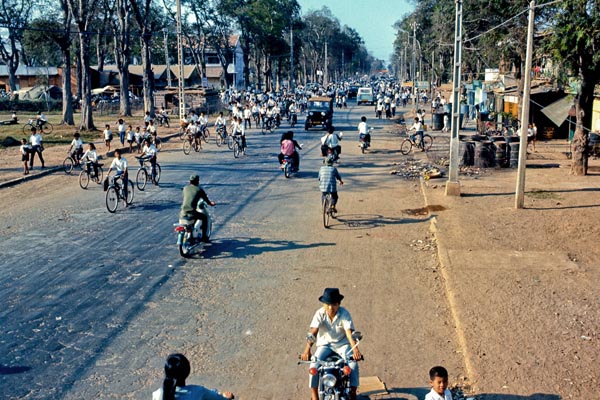 This dynamic photo, courtesy Lance V. Nix on Flickr, shows that commuters in the provinces didn't necessarily have the same access to automobiles and gasoline as in Saigon. Rush hour on My Tho's main street Hung Vuong Blvd. is seen at the end of a work day in March 1969.

My Tho ("mee taw") was a provincial capital in the Mekong River delta, and became one of five bases for river patrol boats from the U.S. Navy's River Patrol Force. 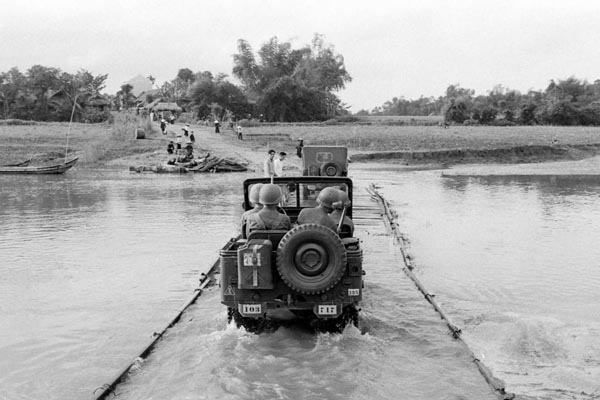 Throughout the country the road and rail system was rudimentary, while the waterways were extensive. The side that controlled the rivers and canals would control the heart of South Vietnam, and the Navy was determined to do that when they established the River Patrol Force (6), also known as the "Brownwater Navy."

An ARVN convoy of shiny new Mitsubishi CJ3B-J4C's crosses an unknown river in this 1961 photo by Howard Sochurek for LIFE magazine. (7) 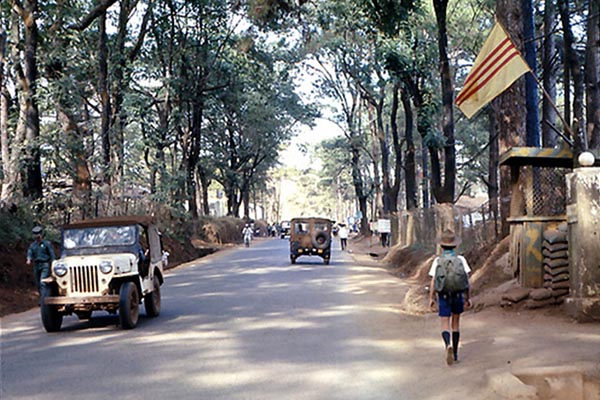 Beautiful photo by an unknown photographer, of a well-used civilian CJ-3B and a young Boy Scout, passing a South Vietnamese miltary installation in Pleiku, which had been little more than an undeveloped air strip in December 1962 when it was chosen as a base for the South Vietnamese Air Force. (8)

Pleiku was strategically important because it was the western end of the military supply corridor extending along Highway 19 from coastal port facilities in the east. (9) 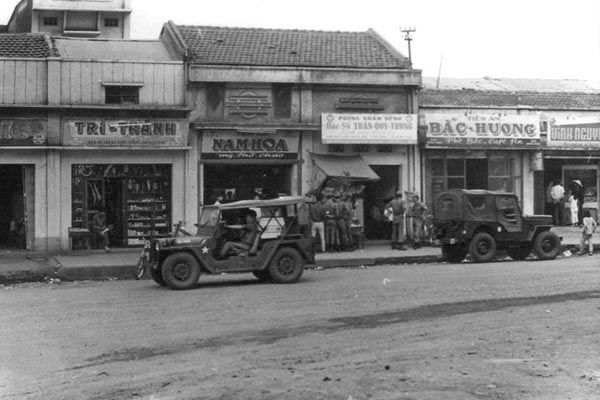 Pleiku's location also made it a center of defense for the entire highland region of South Vietnam. The U.S. established a presence very early in the war at Camp Holloway, and the Viet Cong attack on this base in early 1965 was one of the key escalating events that brought U.S. combat troops into the conflict. (9) The 1st Air Cavalry's campaign in the area in late 1965 led to the title of J. D. Coleman's book Pleiku: The Dawn of Helicopter Warfare in Vietnam. 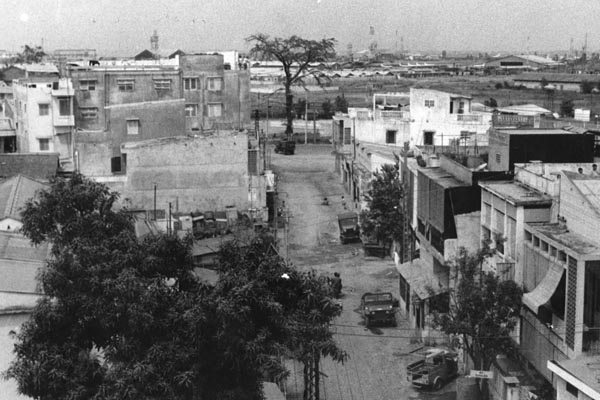 Not much moving in the street at noon on a hot day, except a few Jeeps and a few kids playing, in this undated photo from the Pat O. Clifton Collection of the Virtual Vietnam Archive (5). The location is unknown; an airfield is seen in the background, and is possibly Tan Son Nhut Air Base near Saigon. 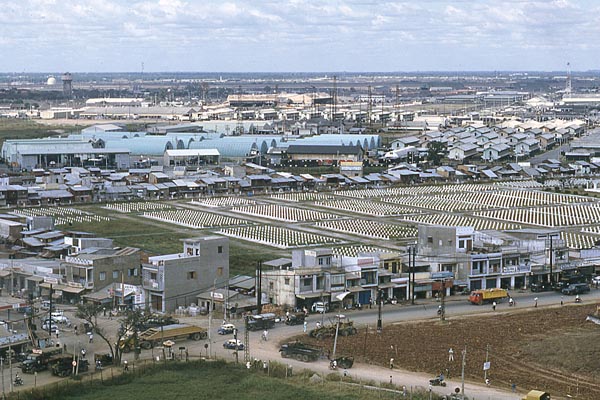 We get a reminder about the real meaning of war in this aerial view of Tan Son Nhut Air Base. This is another remarkable photo (500K JPEG) from 1969 by George Lane, with photo restoration by CJ3B.info. (4)

Laid out in front of the base is a large French National Cemetery for casualties of the First Indochina War (1946-1954.) This cemetery was the site of a significant battle between USAF Security Police and a large Viet Cong force attacking the air base during the Tet Offensive of January 1968 (11), and again in May 1968.

Thanks to Luis Mariano Paz, Federico Cavedo, and of course the photographers. -- Derek Redmond

Return to CJ-3B Jeeps in Vietnam.