The Deer Hunter and The Killing Fields

The Deer Hunter (1978) was directed by Michael Cimino, and won an Oscar for him as well as for Best Picture. Among many other things to recommend the film, it includes a few brief appearances by some Mitsubishi CJ3B-J4C Jeeps.

From a review by Damian Cannon in Movie Reviews UK: "An emotionally charged, detailed saga of friendship and the damage wrought by Vietnam, The Deer Hunter stands with the very best of this genre. In the small Pennsylvanian town of Clairton, the skyline is dominated by a looming steelworks. In amongst the smoke and fire labour men who never escaped from their birthplace.... Three life-long friends are about to leave, for Vietnam, while one of them is taking an extra step into marriage.... The Deer Hunter offers a view of Vietnam from the common-man perspective."

It is in the final section of the film, when Michael returns to Vietnam to look for his lost friend Nick, that several CJ3B-J4C Jeeps help to create the chaotic atmosphere of the last days of Saigon. Michael rides in a Jeep with a machine gun mounted in the back, as it speeds out of the American embassy while MP's keep the crowds away from the gates. He travels through the streets of Saigon in a fast-moving, atmospheric scene, and there is never a clear, complete look at the Jeep. 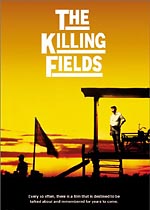 The "real life" story behind The Killing Fields is by now well-known. Sydney Schanberg, a correspondent for the New York Times, covered the invasion of Cambodia with the help of Dith Pran, a local journalist and translator. When the country fell to the communist Khmer Rouge, the lives of all foreigners were immediately at risk, and Schanberg got out along with most of his fellow Western correspondents. He offered Pran a chance to leave with him, but Pran elected to stay. And when the Khmer Rouge drew a bamboo curtain around Cambodia, Pran disappeared into a long silence. Back home in New York, Schanberg did what he could to discover information about his friend; four years later word came that Pran was still alive and had made it across the border to a refugee camp. 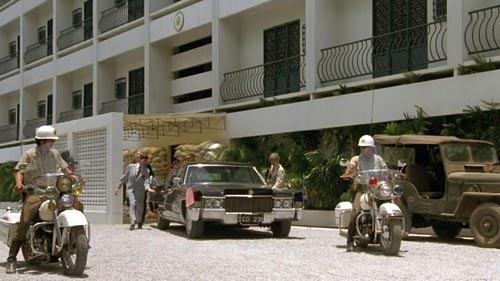 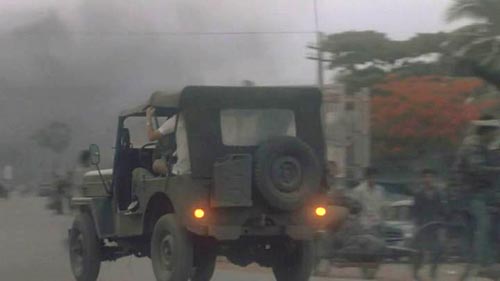 This movie takes the chance of switching points of view in midstream, and the last half of the film belongs to Dith Pran, who sees his country turned into an insane parody of a one-party state, ruled by the Khmer Rouge with instant violence and a savage intolerance for any reminders of the French and American presence (except perhaps for the Jeeps). 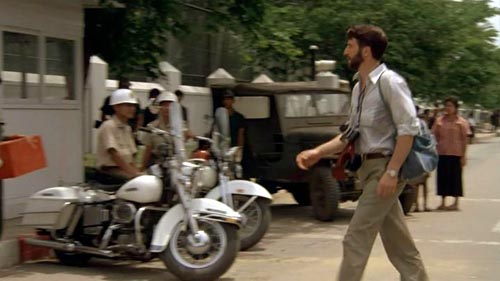 Dr. Haing S. Ngor, a non-actor who was recruited for the role from the ranks of Cambodian refugees in California, is absolutely convincing. Sam Waterston is also effective in the somewhat thankless role of Sydney Schanberg, and like a good war correspondent he seems more at home in a Jeep (50K JPEG) than being driven around by Pran in their pre-revolutionary white Mercedes.

Thanks to Vilero in Spain and the Internet Movie Cars Database for frame enlargements. -- Derek Redmond