This beautiful CJ-3B was photographed by second owner Adam Charnok. As of 2009 it is owned by Michael Langner in Nebraska. It is in virtually original condition, and since it comes with original documentation, this Jeep is a prime example of a surviving vehicle which helps to clarify what we know about CJ-3Bs. For example, it establishes the point where Kaiser had used up all the grilles and tailgates with the "Willys" stamping, but was still using hoods stamped with the old brand name. The paint is Treebark Brown Poly, and the VIN is 57348 114124, which has established a reference point to help determine those elusive mid-1960s CJ-3B production figures. 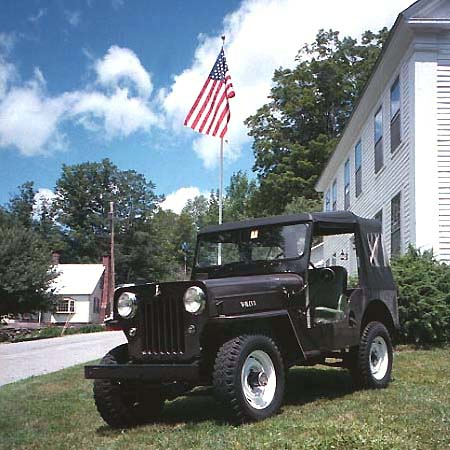 When he first acquired this Jeep, Adam gave us some background: "I had found a Spanish 4X4 magazine from the late 80's, that my father brought back from Spain. In it were some nice pictures of 3B's. This magazine exposed me to the 3B, and I liked them so much I saved my money ($1800 US) and bought one. This was in 1990. It was a 1964 and was an older restoration that was mostly stock. The axle broke, out on Block Island. At the time I was next to broke, and to get it fixed cost too much. Getting towed home was even worse. I was 150 miles away. Somebody offered me $700 US for it, and I had to sell. I swore I'd own another one -- now I do." 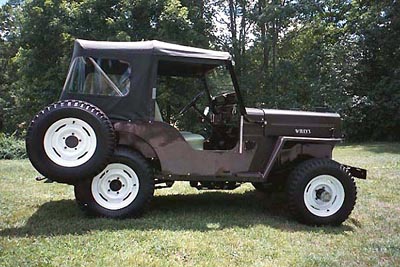 "It is nice to see how it was put together back then, seeing that this Jeep is untouched. The Jeep has only 4900 miles on it and looks very close to new -- it has been kept in a heated garage, and driven only on nice days. It was used by an old lady for the dump run and to go to church. It is unreal how new everything looks. I have all the original paperwork including the bill of sale dated June 26, 1963." 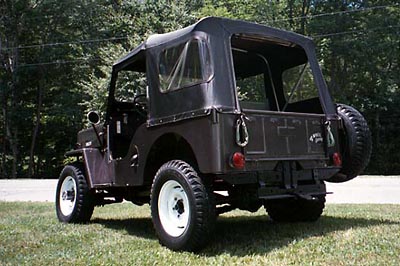 "I have been detailing it for a Fourth of July parade -- haven't ever done that before. I detailed the chassis and painted the wheels and waxed it. (See Everybody Loves a Parade for a photo.) The rubber on the Jeep still has the white (and in some cases yellow-orange from age) release wax. Even on the pedals. I've been taking it off, after much debate because it looks so good just like new." 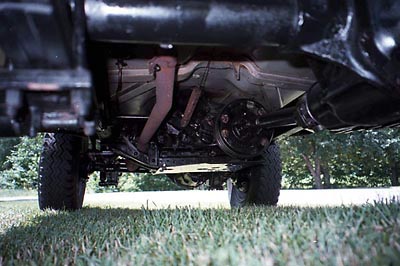 This view of the underside shows the transfer case and parking brake. See also the rear springs and axle (40K JPEG) and the Power-Lock locking front hub (25K JPEG), a dealer-installed option. 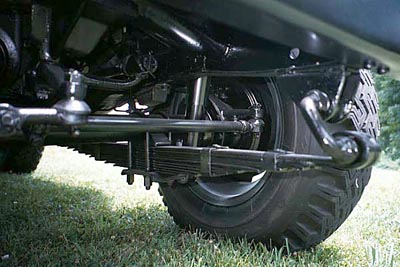 Adam says, "Everything on the chassis was painted black. The frame seams to have been assembled (springs hung, axles etc.) then shot with paint all at once. The paint is some sort of oil base, almost like undercoating, very durable. Where spots were faded and not glossy to my liking, I found a blast with brake clean reliquified it, and when it dried it returned to a glossy finish. The shocks are a different shade of black, being from an outside manufacturer." 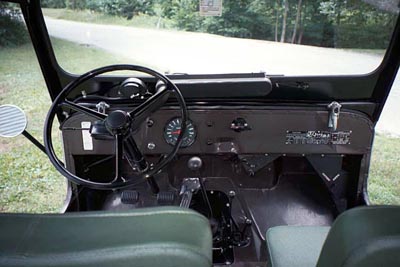 This interior view shows the T-shaped parking brake handle and the factory defroster hose and manifold. See also these interior details: the underside of the passenger seat (60K JPEG) and the "Approved Jeep Equipment" label on the White Mfg. soft top (15K JPEG).

Thanks to Adam for his comments, and to Jim Allen. See also Jim's look at this Original 1963 CJ-3B, Close-Up and Ed Surjan's photos from the 2005 Rhinebeck Auto Show. -- Derek Redmond