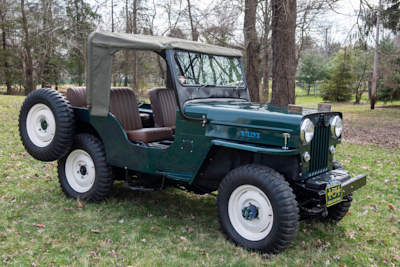 After driving it some on the weekends and suffering frequent breakdowns, I realized it was time for a restoration. 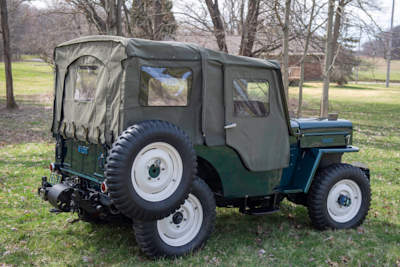 I began the restoration in the fall of 1999. The first project was a donor body I got from a friend of mine. It was in his garage for years. I tore it apart and learned how they were put together and salvaged a few parts off it. 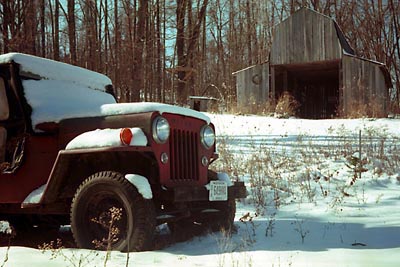 I started in on my tub in December, 1999. I was working in my buddy's garage because it is heated, but it is 14 miles from my house. I began by removing the fenders (50K JPEG) and removing the tub and setting it outside. I had originally thought I'd be restoring that body, but it was way too far gone for my abilities.

I agonized over the decision but came to realize that if I ever wanted to drive this thing again, I would need to buy a repro body. I was never impressed with the quality and looks of the repros. I would use one for a hot rod Jeep but didn't want to use one for a restore. 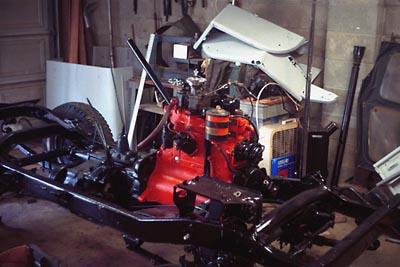 I put the body work on the back burner for a while and concentrated on the running gear. I had it blasted and then painted it with POR-15. I replaced the springs and all hardware, the brakes and all hardware, every bearing and seal I could find, and also u-joints.

The steering was reasonably tight so I did not mess with it. The motor had been rebuilt not too long before so I did not mess with it either, ditto with the transmission and transfer case. I did move the alternator to the correct location and I cleaned and painted the engine Chevy orange. (The engine was red when I got it.) Even though the engine is probably supposed to be black, I think it looks better in orange. Plus I can see to clean off dust and oil better if I happen to spill some on it.

While I was still up in the air about the body tub, I saw a post from JC Jenkins in California on the CJ-3B Bulletin Board, about a '59 (or so) body that was rescued from the crusher. I jokingly e-mailed that I'd like to buy the body and to my surprise we made a deal the next day. We arranged to have the body shipped via Roadway express. It came to me cheaper than a repro tub but it did need a lot of work. There were several dents and a bunch of holes cut everywhere. I bought a Mig welder and set to work. 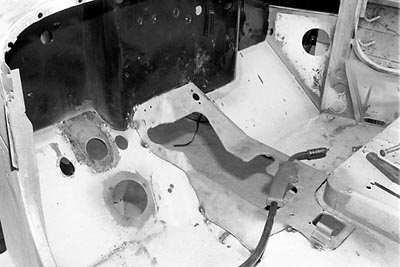 First I had the body bead blasted. The biggest areas to be fixed on the body were large holes for tail lights, and the transmission hole which had been hogged out (badly) for a V-8 conversion. I used metal I took from the same areas of my old body and welded it into the new body. See also rear view photos of the bodywork (50K JPEG).

Along the way, I changed the dashboard out, also using my '53 as a donor body, and also filled several small holes in the firewall and down each side. After spending a month or so on the repairs, I had a very nice original body with no rust at all. If I'd have gone with a reproduction I would not have been as happy. I've seen them and they are not the same. 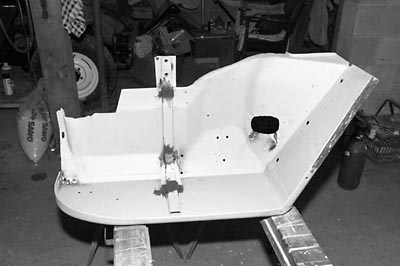 The fenders for my project came off the Dennison Fire Jeep seen on CJ3B.info. The windshield is also from that Jeep. In this picture of the fender, the hole is where they ran a hose through when it was a fire Jeep. The duraglass areas are covering up where I welded the gaping holes in the fender supports. They had cut these out also.

I decided to leave the hole on the right side of the tub for the heater intake. It was not hurting anything and if I want to put that style of heater in it later, I have the option. To cover the hole, I used a spare master cylinder cover I had lying around. It was a perfect fit! See a photo of the tub on the frame (50K), taken after my handywork. 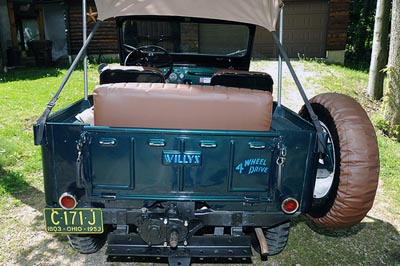 I cut one tailgate across the bottom, and another across the top and welded them together to make a nice gate. The join is just above the lower strength line.

The only thing I did not do myself on the Jeep was the paint. I had a woman in Dover, Ohio paint it. It has 7 basecoats and 3 clearcoats. The Emerald Green Jewel Metallic for a 1995 Ford Thunderbird is very close to the Woodstock Green that was so popular at Willys in 1953. When seen in the sun and just the right angle, it takes on a blueish hue (see a side view photo, 50K JPEG.) 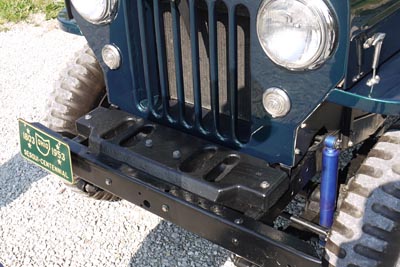 Ohio lets you put on year of manufacture plates. I looked high and low for a '53 plate that made some reference to Jeep. I ended up with C 171 J for the plate number. In 1953 Ohio did not have a front plate of the same number, but rather had a special "sesquicentennial" plate denoting Ohio's 150 years of statehood. The front plates are hard to find, and most of them in this shape cost around $125. I found this one from a guy in Australia for $25, plus $10 shipping. 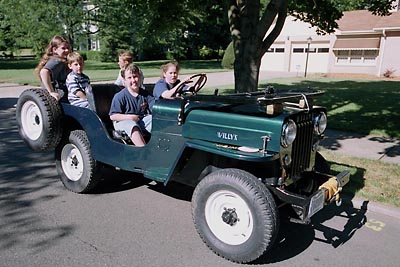 After painting I gathered friends around and we put the body on. A few weeks after that I switched jobs and had to move. I managed to make the Jeep reasonably whole before we moved it up to my new place on a trailer. After the move, I replaced the wiring harness and did many other small jobs. Every nut, bolt, screw and washer on the body is stainless steel, as well as the hood latches and footman loops.

Here are the nieces and nephews just before the First Towne Days Parade in New Philadelphia, Ohio on 6 July 2001. The Jeep also carried Mindy and me at our wedding (170K JPEG) in September 2001. -- Bob Christy 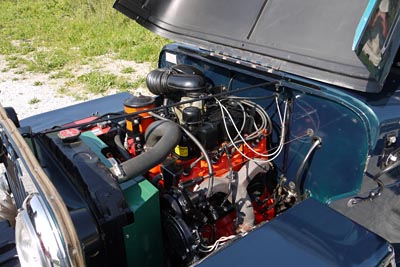 Thanks to Bob for the story and photos of Gertrude.

Here's one I took of his Chevy-orange engine (which he has indeed managed to keep nice and clean.) Also on CJ3B.info, see his hood reinforcement, designed to prevent dents and cracks in the hood. 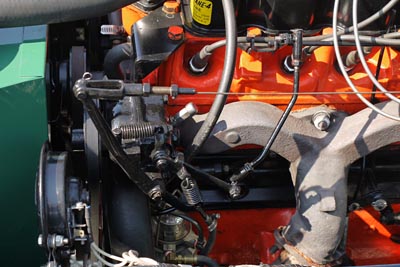 Here's a look at the governor Bob added, for operation with his newly-restored 3-point hitch in the rear. See also the front suspension (130K JPEG) with steering damper and lots of spring to support the front bumper weight. 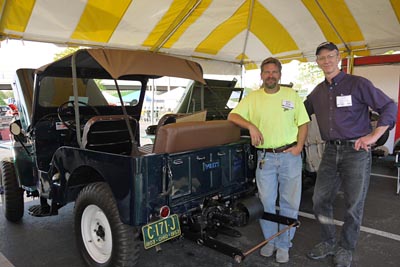 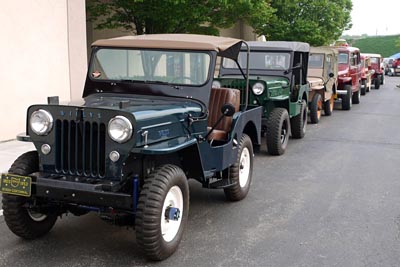 Nice shot of Gertrude all set to lead the Willys caravan through some beautiful scenery in Cuyahoga Valley National Park, during the 2013 Spring Reunion.

Also on CJ3B.info, see Bob's Jeep at his Northern Ohio Jeep Show, on the cover of the 4WD Hardware Catalogue, and Pulling a Bush Hog Mower. -- Derek Redmond