Finding correct seats seems to be almost as much of a problem as replacing rusted body panels, when you begin a Jeep restoration. Often the original seats have been replaced with bucket seats sometime in the past forty years. And lots of CJ-3B owners (especially those with children) are looking for a rear seat, because typically the Jeeps were originally purchased without one. Many buyers of the economy-model 3B seemed to be willing to order the optional front passenger seat, but felt that the rear seat was an unnecessary luxury, or perhaps a hindrance during the workday.

This CJ-3B body tub photo from the 1965 Jeep Universal Service Manual shows the optional front and rear passenger seats, in addition to the driver's seat. The factory installation of the rear seat is also visible in the photo -- pins on the rear legs of the seat which slipped into spring clips mounted under the floor (8K JPEGs).

Combined with tabs on the front legs (8K JPEG), which slip under metal straps, this made the seat fairly easy to install and remove. All CJ-3Bs are ready for the bolt-on spring clips -- there are 2 knockouts in place on vehicles without rear seats installed.

Note: this illustration, taken from the 1965 service manual, appears to be the same one used in 1950s parts and service manuals. It was retouched to show the post-1956 instrumentation and the post-1961 parking brake handle, but the front seats are still the type found only in pre-1957 Jeeps. 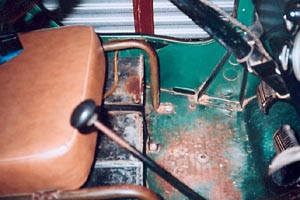 Early-1950s CJ-3Bs had front and rear seats similar to the CJ-3A, with the driver's seat mounted on a frame attached to the floor in front of the gas tank. These were probably used until serial number 57348-34452 in mid-1956, the point when the old 3A-style dashboard instrumentation was replaced by a single instrument cluster.

This photo shows the seat in Lawrence Wade's '55 (reuphostered in a tan rather than the original grey). See also a rear view (100K JPEG). 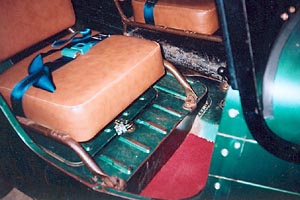 The front passenger seat in early CJ-3Bs tilted forward for access to the toolbox below it and to the rear cargo area or seat. The legs projected forward like the driver's seat, so the hinges mounted at the front of the toolbox. See a rear view (100K JPEG) and the rear support bracket (80K JPEG). 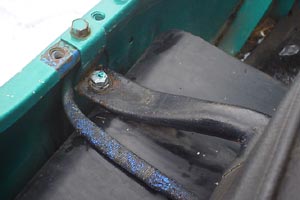 The later front seats were similar to those which had appeared in the early CJ-5 (130K JPEG). The driver's seat attached to the side of the body at the driver's door opening, rather than to the floor. The 1965 Universal manual has a diagram showing adjustment of the seat by unbolting it and moving it to another of the three holes. 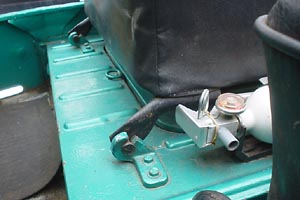 The front passenger seat in late CJ-3Bs also tilted forward for access, but the hinges mounted further back on the toolbox. 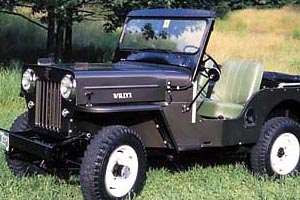 The new seats were fully upholstered -- the upper cushion was sewn to the lower cushion and enclosed the seat frame -- and had a slightly curved back. Jim Allen's photo of this 1963 CJ-3B shows this "bucket" seat design often referred to as the Bostrom type, after the company which designed early ergonomic seats. 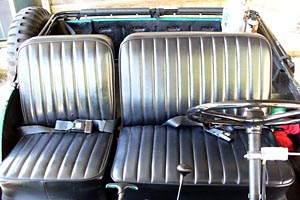 Some CJ-3Bs were sold with a 60/40 split front bench seat. The passenger side folded forward for rear access. See more photos of the seats in Steve Childers' 1964 CJ-3B (right) which are apparently reupholstered:

There was also an original Jeep center jumpseat designed to fit between the front seats. See CJ-3B Number 9. 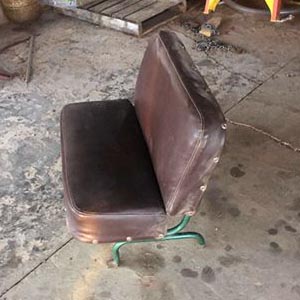 This Barcelona Red back seat looks pretty comfortable compared to the seat used on the CJ-2A. The bottom cushion of a CJ-2A rear seat (10K JPEG) was thinner, and attached to the tubes by a flap screwed into the inner side of the tube.

On a CJ-3A/3B rear seat the bottom cushion is the same thickness as the upper cushion and attaches to the bottom tube with screws around the outside of the tube as on the top cushion. See also a rear view (30K JPEG).

The 3B seat is similar to a CJ-5 rear seat, but has a different system for mounting it in the Jeep. For more details, see Rear Seats: CJ-2A through CJ-5.

Thanks to Clifton Clark, Bruce Mygatt, Lawrence Wade, Rusty Friesen and the other photographers. -- Derek Redmond

Elsewhere on the web, Jaime Gomis has instructions for putting Wrangler seats in a CJ-3B.