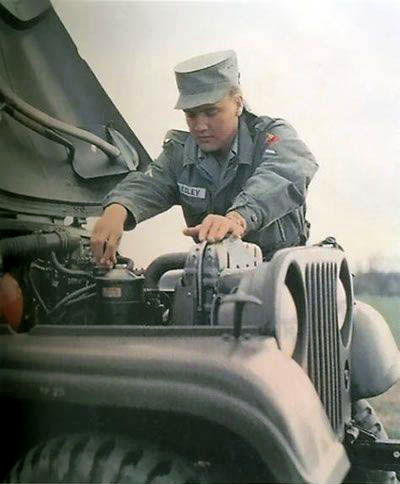 Yes, Elvis Presley was familiar with the Willys F-head engine. As a Jeep driver, Pvt. Presley knew how to check the oil, and a number of other basic maintenance procedures.

Despite being probably the most famous person in the U.S.A., Presley was drafted in 1957 for the standard two years in the Cold War-era U.S. Army, and reported in March 1958. According to U.S. Army History, he trained until September 1958 with Company A, 2d Medium Tank Battalion, 37th Armor at Fort Hood, Texas. He then served in Germany from October 1958 until March 1960, with the Headquarters Company of the 1st Medium Tank Battalion, 32d Armor. He wore the shoulder insignia of the 3rd Armored Division, which had become known in World War II as the "Spearhead" division and had been sent to Germany in 1955 to guard the Fulda Gap against a possible Soviet invasion.

This photo shows the axe stashed under the hood with the shovel, instead of in its usual M38A1 location on the right rear wheelhouse. This is probably due to a radio mounted in the rear (see photos below.) 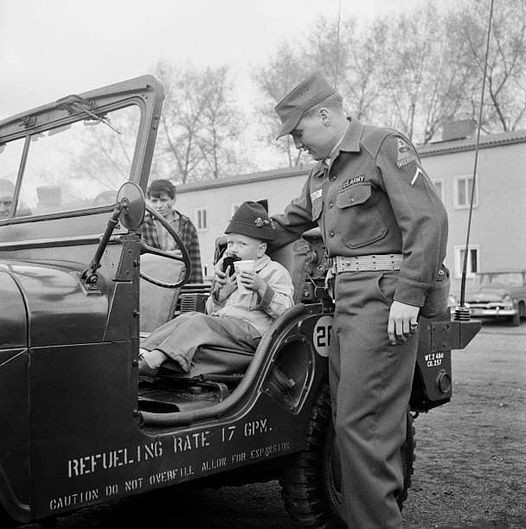 By 1958, Willys had produced over 100,000 M38A1s for the U.S. military, so they were pretty common on bases worldwide. But the Jeep seen here comes with lots of instructions, probably in recognition of the constant rotation of draftees.

During his 18 months in Germany, the Army kept the press away from Elvis most of the time. But Presley apparently impressed his superiors, and was promoted to Private First Class in November 1958, and to Specialist Fourth Class in June 1959. 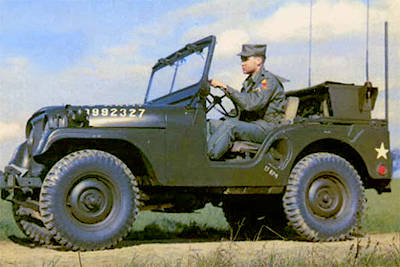 This shot appeared in the "Elvis Collection" trading card series. The text on the back of the card read: "Elvis surrounded himself with luxury vehicles and often gave expensive autos as gifts to relatives, friends and associates. But, for some reason, from March of 1958 to March of 1960, Elvis preferred a very different form of transportation. Replacing the Lincolns, Cadillacs and sports cars was a much simpler vehicle."

In fact however, Elvis also took the opportunity of the posting in Germany, to pick up a white BMW 507 (60K JPEG) which he reportedly later gave to Ursula Andress, his co-star in Fun in Acapulco. 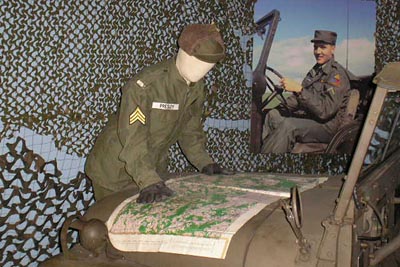 Presley was promoted to Sergeant in early 1960, shortly before his discharge from the Army. His uniform from that time was photographed (right) by Len Cleavelin in 2006, on display at the Patton Museum of Cavalry and Armor at Ft. Knox, Kentucky, in a special exhibit called "Sgt. Presley, Citizen Soldier." On the wall is a picture of Elvis (230K JPEG) that appears to come from the same photo shoot as the other color photos above. 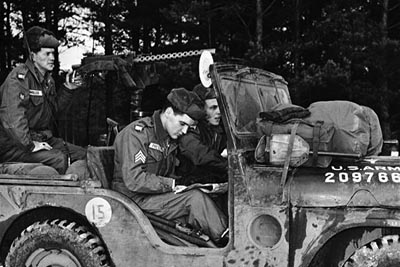 This picture was released by the Army during a press conference on March 1, 1960 in Friedberg, Germany, prior to Elvis Presley's return to the U.S. The caption reads, "Sgt. Elvis Presley checks position on map in an undated image, as he directs jeep driver, Pvt. Lonnie Wolfe, of Masontown, W.VA. Exercise 'Winter Shield' was played as realistically as possible. Machine gunner, SP4 Hal Miller, of Taftville, Conn. is ready for the 'enemy.' This team commanded by Sgt. Presley is part of the 32nd armored scouts, of the 3rd armored division which participated in the winter exercise." (AP Photo)

See more on this Jeep in Elvis Jeep Toys on CJ3B.info. 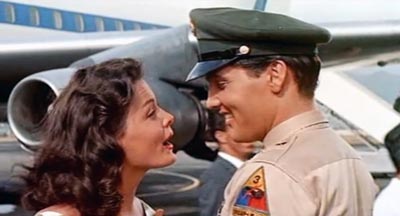 Elvis remained in the Army Reserve until March 1964, and he also wore a uniform frequently in the movies he made after his return Stateside. His character in 1961's Blue Hawaii (right) was "Sgt. Chad Gates", newly discharged from the 3rd Armored Division. In Kid Galahad (1962) he played an ex-G.I. who becomes a boxer. 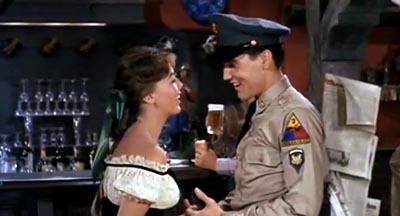 Hard to believe this shot is from a different movie than the one above, but this time it's G.I. Blues (1960). Elvis' character "Tulsa McLean" is a U.S. Army Specialist Fifth Class (SP5, a rank which no longer exists), a tank crewman with the 3AD in West Germany. McLean is also a singer who dreams of running his own nightclub when he leaves the army. 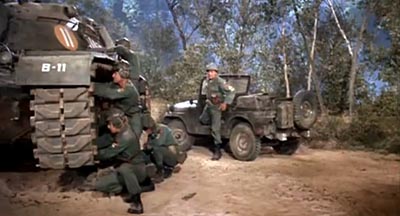 Sergeant McGraw (Arch Johnson) in G.I. Blues doesn't have a driver for his Jeep; he drives the M38A1 himself (50K JPEG) and shows up at awkward times like when the tank crew is dealing with a broken track. The film has a great title sequence featuring nighttime tank maneuvers (50K JPEG). 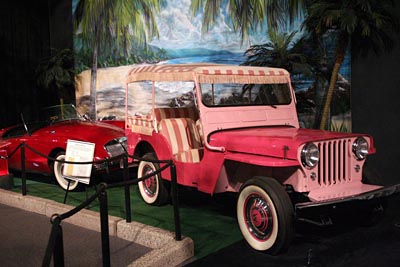 Meanwhile, at his Graceland estate in Memphis, Elvis apparently missed having a Jeep to run around in. His custom-painted pink Cadillac was already famous, and he must have liked the Tropical Rose/Coral Mist factory paint scheme of the new Jeep DJ-3A Surrey, because shortly after his return he bought a 1960 Surrey at Sharp Motors in Memphis. He also drove one in the 1961 film Blue Hawaii, along with the red 1960 MGA now in the auto museum at Graceland (left). Thanks to Paul and Kelly for the photo. 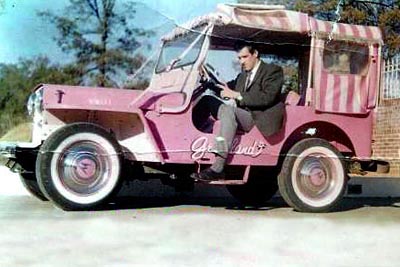 An early photo of the Jeep (courtesy of the Elvis Presley Tankers Fan Club) reveals that it originally had the Graceland name painted on its side. This 1961 snapshot taken just outside the Graceland gate (130K JPEG) shows British writer and fan Roy Barlow in the Surrey. A few years later Barlow became one of the authors of the first Elvis Presley Encyclopedia. 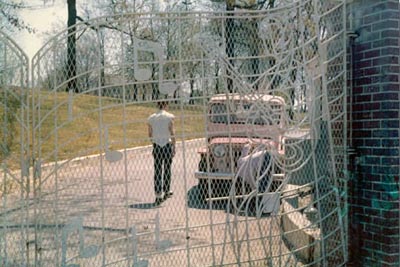 The Jeep was also used by Graceland staff, including Elvis' uncle Travis Smith, to patrol the grounds. In this April 1962 photo by Tony Douglas, it's parked at the guardhouse (40K JPEG) just inside the front gate. Photo courtesy Elvis Australia. 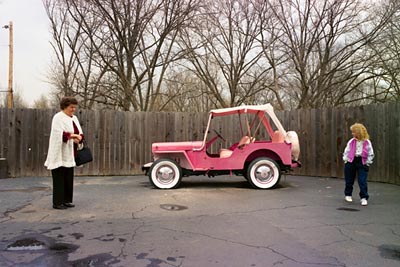 A number of pictures taken after Elvis' death, including this evocative example by acclaimed photographer Tom Patton, show the Jeep stored outside at the Graceland museum, in need of some restoration. The Surrrey had apparently been repainted (removing the Graceland name and the white WILLYS trim) and been given a new folding top. Fans, including some well-known musicians, seem to have often taken the opportunity to sneak behind the wheel for a quick photo in Elvis' Jeep. 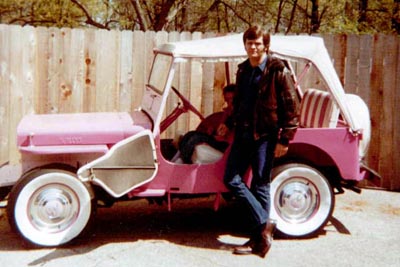 In this 1983 photo by Mike Chunko, the Jeep is looking pretty nice with its new striped upholstery that was similar to (but not the same as) a factory Surrey, a white folding top with a Surrey-style fringe and matching doors and spare tire cover.

By 1987 the upholstery was faded and the fringe was gone. In 1988 the seats were reupholstered again in pink. (Thanks to Sue and Southern Belle for the photos.) 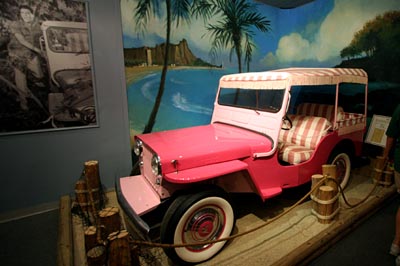 The same Jeep was reportedly restored as a Surrey (though with incorrect details) sometime prior to 2005, when it was photographed by Robin Walker in this display at Graceland, devoted to Blue Hawaii, which featured a Surrey in a minor role.

The Graceland Jeep has become so well known, and so connected in people's minds with the Surreys in Elvis' movies, that the Tonka Toy version of the pink Jeep is widely referred to as the "Elvis Jeep." But it is the 2001 Matchbox Surrey and the 2016 Elvis Jeep Series from Greenlight that specifically represent the Graceland runabout.

Anyway, I think the story of Elvis' experience with Jeeps in the Army, adds some perspective on his decision to purchase a vehicle which was much simpler and less expensive than the exotic automobiles he was best known for.

Thanks to the photographers and collectors who preserved these pictures, and Fred R. Childers for the photo of the Graceland gate. Thanks to Colin Peabody and Bruce Agan for help with research. Of course the most significant thing we're still missing, is a photo of Elvis Presley himself in his pink Jeep.-- Derek Redmond

Christmas 1957 -- Elvis is drafted amid a "White Christmas" ruckus.

Billboard Magazine Top 20 of 1956 -- the future of popular music and four wheel drive.