Putting a Hurricane Engine in a Low-Hood Jeep 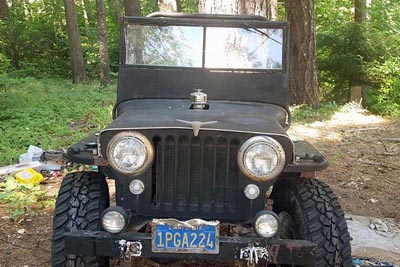 People have asked on the CJ-3B Bulletin Board if it is possible to put a Hurricane F-head engine into a CJ-2A or 3A without cutting a hole in the hood for the carburetor, a solution seen here on Brad Markgraf's CJ-3A, with a small air cleaner (110K JPEG) over the Carter carburetor.

It's the same problem faced by Willys engineers in 1949 (see New Universal Jeep Designs, 1949-53 on CJ3B.info.) The neatest solution is perhaps to avoid the need for body work by using a lower-profile carb (see below.) 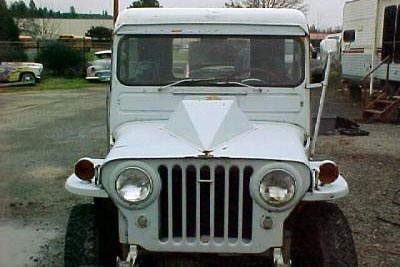 But O.E. Szekely & Associates, Inc. in Philadelphia converted hundreds of Jeeps as "self-propelled electric power plants" for the U.S. Navy and Air Force. These auxiliary power units (APU's) were used for starting airplanes at air bases or on aircraft carriers. Some used the smaller L-head engine, but many had triangular sheet metal covers over a hole in the hood, to accomodate an F-head (right). 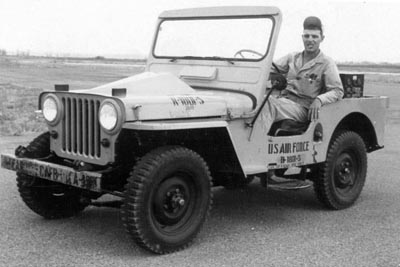 Jerry Formaz sent this picture of himself in a US Air Force APU in 1953. He commented, "We had two in our unit (44th Fighter Bomber Sqdn.) at Clark Air Force Base in the Philippines. I was crew chief on an F-80C aircraft and later on a F-86F. In 1953 we received two of these Jeeps to start our aircraft; they were in addition to the big clumsy Lycoming Power Units that we had to manually move from plane to plane. The Jeeps were produced by Szekely and were powered by the F-head engine."

Note: Lycoming later also put its Lycoming JB-1 Aircraft Generator in a Jeep, with a different solution for fitting a larger engine. 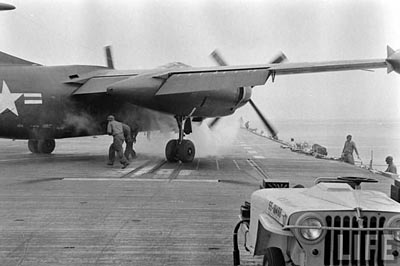 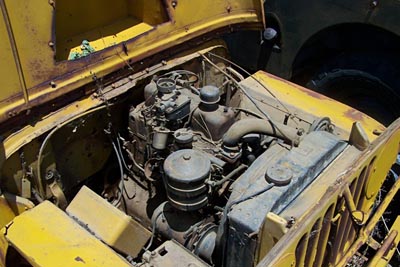 The example seen at right shows the large hole in the hood above the F-head valve cover.

According to a reference in Decisions of the Comptroller General of the United States, vol. 36 p. 406 (1952), Szekely's model NC-5 installed a Ford V8 engine. 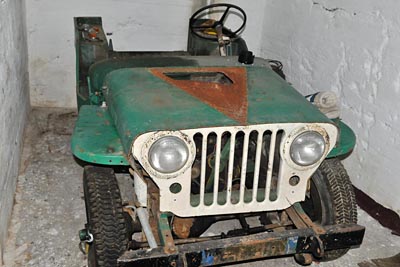 In some cases the sheet metal covered a hole just large enough for the carb. A dashboard photo (130K JPEG) from this Jeep shows a Szekely ID plate for model NA-3, with gauges for RPM's and engine operating hours. Rated generator output is 1000 amps at 30 volts for aircraft starting. Photos courtesy of Kristanga in Norway. 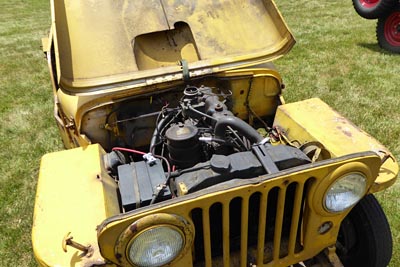 The form-fitting hole was also used in this CJ-3A converted by Valentine Welder & Manufacturing in Detroit; it was a predecessor to the three-wheel version built by Szekely. See more photos of this rare Jeep at the 2016 Annual Willys Jeep Rally.

Another solution is adding sheet metal to raise the hood! See Homemade High Hoods on CJ3B.info.

Chris Henry said: "I have put a 60's Ford Falcon carb in my Jeep. It does require some work, but it is the best alternative in my opinion if you really want an F-head where an L-head should go. First: the bolt holes are in the right place, but they will need to be bored out on the carb. The challenge is finding a horn to fit over the carb. I used a PVC elbow and scraped the threads out of it. This is the most challenging part, because there is only about an inch of clearance between the carb and the hood. I think the carb is right at 4 inches. It's really small, almost looks like a lawn mower carb, but it works fine. 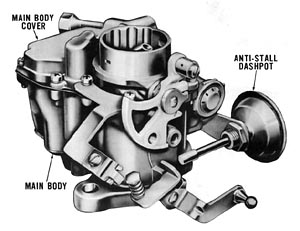 "Some shimming is needed with the gasket to get everything to fit. It was necessary in my situation to grind the throttle arm and the intake manifold some so that the arm would go all the way down. You will see what I mean. This is a critical thing because you can't get the carb adjusted without it all the way down. I fabricated a bracket with a spring and bolted it to the coil bracket to provide return tension. I fabricated a linkage from #9 wire, a small cable, and brackets for the throttle linkage. Others have suggested a motorcycle cable. The choke will work just fine, although you will need to fabricate a bracket to support it. (I just welded some sheet metal pieces together.) It will also be necessary to re-route the fuel line (a minor modification). Hope this helps. It's a really tight fit, but it works and the Jeep runs fine."

John Hubbard said: "The 144-170-200 Ford industrial engines used the small squatty carb I believe was a Holley, and on some applications used a 90-degree air cleaner top that clamped to the carb. Find an Industrial Ford supplier and you might still be able to get that part. "

However, Dave Specht warned: "Gene, I put a 1963 Ford Falcon (if my memory is correct) carburetor on my F-head engine to avoid cutting a hole in the hood (my Jeep is a CJ-3A 1950 and has the lower hood). I had to change the throttle linkage and am not happy with it still. The original air filter will work but doesn't fit tightly -- had a problem plowing snow last winter. Seems ice built up in the venturi of the carburetor and flooded the engine, then of course the engine backfired, and the top of the engine caught fire. Got that put out safely (ran to Walmart and bought two fire extinguishers immediately) and little damage was caused. I need to seal the connection between the air filter and carburetor."

Todd had a different and far stranger solution: "I had an F-head in my 2A. My dad found a side draft carburetor that we attached to the engine with an elbow of exhaust pipe with flanges welded to fit to the engine, and other side to bolt to the carb, so the hole in the hood could be patched over. Strange I know, I never saw a side draft carb before, but I was only sixteen then. The carb was blue in color, and it worked real good, then the motor took a dump, then off to V6 land. Hope this helps."

H. Wooldridge: "The side draft carbs were used on welders and stationary engines that had the gas tank on top of the engine. I once had a Linde welder that was built that way with a wet air filter and a side draft. The engines were a similar displacement to a Jeep and many were made by Continental Red Seal. An industrial engine shop or junkyard might be a good source." 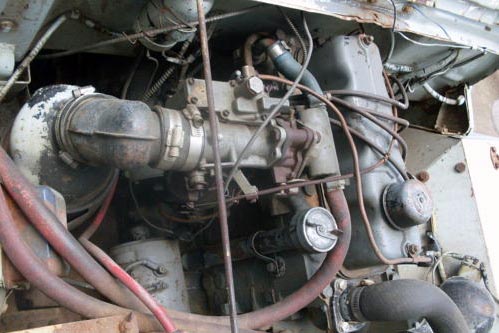 Jyotin says, "A suitable side draft carb is a Carter YH from a turbocharged Corvair Corsa. It was also used in '53-54 Corvettes. I would suspect that you still want the .076 aperture that was in the Jeep Carter YF, but Jon at The Carburetor Shop could tell you how to configure it. I have never done this installation, but I saw one a month or so ago. It really looked good!"

Thanks to Joe Poulson for the photo of a Corvette side draft carb on an F-head in a 1950 CJ-3A.

Andy Stock notes, "The AMC Vigilante 327, when outfitted as a boat engine, came with the YH side-draft carb. Good luck trying to find one, though." And Jean-Francois Lavie says that side draft carbs can be found on English cars.

Finally, Uday Bhan Singh has a solution using a Solex carb: "The CJ-3Bs made by Mahindra came with Solex carbs in the later years. These carbs were fitted with a distance piece of about two inches in height, and while fitting the engine on my 3A, I had to do the following modifications:

"The performance of the Hurricane engine is very good on these low bonnets. I am more than satisfied with my daily user 3A which returns me a mileage of 10 kms. to a litre, using a 110 main jet."

Colin wanted to mount an F-head onto a CJ-2A frame but immediately noticed that the mounts did not line up. He asked: "I have 10 jeeps and am making one that I can use as a tractor. I am putting an F-head in it, but noticed that the mounts do not match up. I thought that the engine blocks were the same, so I assume that the frame is the problem. I notice my 3A's engine mounts are lower than my 2A mounts but both have the L-head engines; the rear mounts also do not match up. Am I going to have to cut off a mount from one of my junker 2A's and mount it forward to get a match? As it is, the engine is torqued way to the right, looking from rear, and the brake line tab on the bottom of the motor mount has to be moved. I also tried to use an F-head distributor, but the shaft is different. I am going to try to disassemble an F-head distributor to use the bearings since I have several of them. Is that going to work? I know that the carburetor will be a problem, too."

Uday Bhan Singh commented: "The first question is, why do you want to use a F-head in your 2A if you are going to use it as a tractor? The side valve engines deliver better torque at low RPMs, and they are good for pulling and hauling.

"If you have other ideas, then the question of motor mounts comes up. Regarding the tilt of the engine towards the battery, it is because the left side mount is high. If you want, you use can use spacers under the right mount to level the engine, provided height is not a problem. The rear mounts should line up. Maybe the rear cross member is from a WWII jeep. The civilian models had a deeper cross member for the T-90s.

"As for the carburetor issue, you could use a Solex carburetor without the spacer, as it sits well on the F-head. You will have to match the holes by cutting the edges of the Solex mounting area. These carburetors are quite good and short. From my knowledge, the distributors and shafts of all these engines are the same, so the distributors are interchangeable."

LarryD said: "I think that the engine mounting plates on the front of the engine are different for the F and L-heads. The L-head has two flanges that bolt to the motor mounts that point to the rear of the Jeep. The F-head has two flanges, one pointing forward and one pointing back. If you are putting a F-head in a chassis that had an L-head, use the plate for L-head mounting plate."

Oldtime agreed: "LarryD has explained the front engine mounting plate well. You would be wise to swap to the proper mounting plate to match the frame you are using. I agree with Uday in that you will gain nothing with an F-head over an L-head if your application is for slow speed use. In fact, it could be marginally counter-productive. As for the distributor, don't forget that the shaft end is keyed off center. Some 3B owners would possibly give you an L-head in exchange for the F-134."

Thanks to Andy Stock for assembling the Bulletin Board comments. Thanks also to Bill Lagler and Rui Coelho for the engine photos, and Jerry Formaz for his 1953 photo. -- Derek Redmond