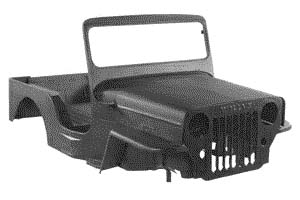 Body rust, and the remains of old attempts to cover rust, are two of the major problems facing many people who undertake Jeep restoration. With time and skill, exact reproduction body panels can be fabricated, and there are also some accurate replacement panels available from Classic Enterprises in Wisconsin, USA (the heart of the rust belt). But replacement of the entire body is an option that some Jeep owners have to consider.This page covers some of the pros and cons of steel reproduction bodies. To our knowledge there are no fiberglass 3B tubs currently being fabricated in North America. See the bottom of this page for new reviews and comments. Further information and opinions are welcome. -- Derek Redmond

John Hubbard provides this history and caution regarding steel bodies:

"I have heard from old Jeep parts guys that repro bodies used to come out of the Philippines (70's and 80's) and used to be mostly hand formed with wood forms and hammers (kind of hard to believe). Some repro bodies were even stainless steel (hard to cut, though). I then heard that for whatever reason the supply from the Philippines dried up for a while and all the repro bodies were coming out of Taiwan, and those bodies were kind of hit-and-miss. One might be fairly straight and welded correctly, and the next might need a lot of work to make it into an acceptable tub.

"My 1961 tub was pretty bad (rust), but because of the inability to see a tub before buying it (if buying a repro tub via mail-order), I decided to weld in panels and supports for the floorboards and re-skin the sides, and add a 10 gauge panel in the back for support. It was a lot of work, but I had a competent metal worker doing the work and I knew that underneath it all was an original Jeep body -- all the holes would match and it would say Jeep on the front of the toolbox!"

JC Jenkins adds: "Most replacement tubs from overseas are thin, not as heavy gauge as original. I would hold out for a used original tub (2A or 3A) in great shape -- they are out there -- and modify the cowl to a 3B. In California, I am hearing about tubs all the time. Most are going for $350-800 depending on condition." (See also Finding an Original Tub.)

"There are some things to look out for. One of them is shipping. Turner charges a flat $100 which is cheaper then any other distributors that I talked to. They are also very fast in delivery. Their body got here (central Maine) before the parts I ordered from them on the same day. Turner charges $200 more than JC Whitney for their body, but JCW charges $100 dollars more in shipping and will not get it to your house for at least a month (they carry no inventory which is suspect in the first place). Both Walck and Turner claim that the bodies of their competitors do not have the gas tank indent and do not have the tool box under passenger seat, which theirs do. This may or may not be true. By the time I got to that argument I did not want to check back with other suppliers -- you should do so when you start buying.

"The body as it came looks pretty good except that the dash is really not set up like the original. It doesn't have the indent and bend for the emergency brake or the steering wheel, does not have the center brace of the original dash, and the dashboard is not set up with the gauge holes."

Buck Toenges installed an M.D. Juan body from the Philippines, and he replied:

"I got my repro body from Karl Walck in Pennsylvania. It came with fenders, tub, and windshield, and the Willys logos on hood, tailgate and grille. It also had a toolbox with script "Jeep" welded to the tub. I can tell you the grille and toolbox lid were definitely not as heavy as original. It had tool indents on the passenger side rocker panel. I welded in an original dash board, welded over the tool indents, and cut those oblong drainage holes. I used the original grille. The neat thing about this repro was that there was wood sandwiched in between the floor and floor supports like the original, so you can bet that it will rust in just the same places as the original."

"Walck's sells the complete body kit for $2000 and it cost me $105.00 to have it shipped by motor freight -- it arrived within four days of its order date. I am pleased with the craftsmanship because I was expecting more flaws. The things that I don't like are that the tailgate is a little rough and not really fitted to mate up easily without some bending. Also the kit did include some nuts and bolts, but not enough to put everything together, which means you have to take what they give you and make a trip to the hardware store to try to match nuts and bolts. All in all though the kit is really nice because the thought of trying to refurbish a 1955 steel body is excruciating, and a new body if properly cared for will last for eons (as is evident in the beautiful original ones we see on CJ3B.info, that have been meticulously cared for by their owners.)"

Curtis Weddle: "My reproduction body kit from Walck's came with a toolbox and gas tank filler neck shroud, and nearly every section of it appeared to be manufactured exactly as the original. Unfortunately, there are no "WILLYS" stampings on it whatsoever. It would seem that the hoods and tailgates graced with these were either discontinued or ran out of stock around the time I decided to purchase a body.

"When I trial fit the body, and found that the transmission cutout in the floor pan is about 1" - 1.5" to the rear of where it should be. Apparently, they got the lower firewall angle wrong and the transmission hump too far to the rear. I expect that I'll transplant a square section from the area of the transmission hump forward of the shift lever, to the area to the rear of the shift lever port, and wire weld the thing back together. Has anyone else had trouble with this when using a reproduction tub? I am certain that the fore-aft alignment of the tub is correct, and that I have the transmission properly mated to the engine. All I can figure is that some minute difference in manufacture resulted in the cutout being too far back."

Todd Kerzic: "After many months of calling around and pricing tubs I found one for my '51 3A for $1495 plus a $100 to ship it. I bought it through Krage Motorsports in Tennessee. It is a Omix-Ada body and it only took four business days to be delivered. There are no brake or clutch pedal holes drilled, but the gas filler hole is drilled and for a 3A the dash is all drilled out including the emergency brake lever hole and brace. Holes through the firewall are drilled and it also came with tailgate hinges bolted on. The master cylinder inspection plate is there, and the toolbox under the seat is there but the latch to hold it shut is different than original.

"I did measure the firewall side to side and it is a half inch shorter than my original. This may make the hood stick out a little because I'm using one that is original. The rear cargo area is very correct for the 3A, with places for footman loops and rear seat latches. So far I am very satisfied with it. It also looks like all the caged nuts for hood, air cleaner etc. are there."

The photo at the top of this page shows the CJ-3B body produced in the Philippines by M.D. Juan Enterprises Inc. and distributed in the U.S. by Omix-Ada Inc. in Georgia. Another body from the Philippines is sold under the name Bemak, by D & L Bensinger, as a body tub alone or a complete body assembly including body, fenders, hood, windshield and tailgate. 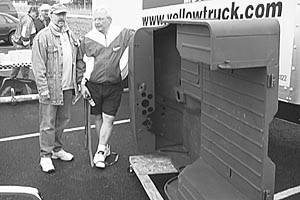 Willys-Overland Motors in Toledo is now offering what they call the "Repli-Tub", modified to original factory specifications, turning the standard replacement body into what is advertised as a 45 minute bolt-on body kit. It has mounting holes and crush sleeves in place, front floor pedal holes in place, taillight holes cut in place. It includes the tub, fenders, hood, windshield frame, and tailgate, as well as all body mounting insulators and hardware, for US$2595 plus shipping. The photo shows W-O owners Jay and Dennis with a 2A Repli-Tub.

Thanks to all the contributors. Further comments welcome. -- Derek Redmond