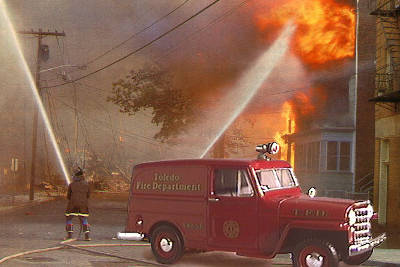 A 1/25 scale model of a 1953 Willys panel delivery truck in the colors of the Toledo Fire Department, produced by Liberty Classics, was the initial inspiration for these pages of fire Jeep toys. The vehicle on which the model is based is seen in this photo, in service in 1958 at a four-alarm blaze not far from the Kaiser-Willys Parkway Plant in Toledo, Ohio.

(Actually, that fire is fiction and this picture is a photo I took of the model, combined with a background photo. And who says pictures don't lie. But it does show what a nice model it is.) 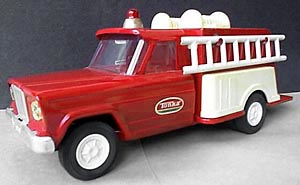 This Mini-Tonka Gladiator-based "Fire Fighter" No. 72 is about 10 inches long, and has dual rear wheels. See a rear-view photo of the truck (20K JPEG), showing the molded plastic hose detail. The ladder is metal. It was available in a Fire Department Set No. 103, which also included the Fire Chief's Cherokee (15K JPEG) and a red Jeep. 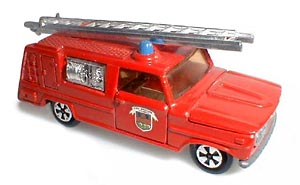 It's unclear whether this Majorette British-style mini-pumper, apparently a Jeep Gladiator, was based on a real prototype. But Bill Munro's book Jeep: From Bantam to Wrangler, (see the CJ-3B Bookshelf) has a page on J-20 trucks used by a British fire brigade (100K JPEG). More information is welcome. This small diecast "Fire Brigade" model is probably from the late 1970's, and has similarities to the later Majorette Range Rover pumper.

This Japanese tinplate Forward Control FC-170 is perhaps the only toy version of what was a very popular small Jeep fire truck. The accurate FC grille is seen in a front view photo (50K JPEG). The detailed hose compartment in a rear view (50K JPEG) is a good example of tinplate lithography. The trucks is about 7 inches long, and features rotating beacon and operating bell. 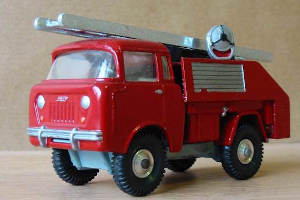 Bob Bateman is a Land Rover enthusiast in the UK, who is aware of the large number of Jeep FC fire engines in North America. He converted a Corgi diecast FC model into a fire engine by adding a Dinky Toy Land Rover rear body, and sent the photo to The FC Connection.

Thanks to J-C Guerry. -- Derek Redmond

Also on CJ3B.info, see some some full-size Jeep Fire Trucks.