Another sports car with a Jeep connection 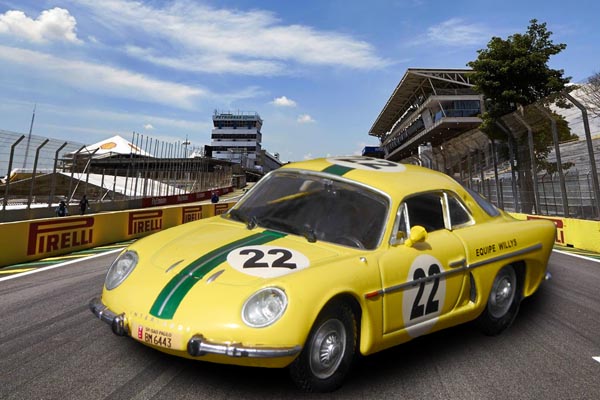 I keep my eyes open for Willys-related toys and memorabilia, and in France recently I ran across this 1/43-scale diecast model of the Willys Interlagos sports car built by Willys of Brazil from 1962-66.

I photographed it against a background of the Interlagos race track in São Paulo, with which it shared a name, and where the Brazilian Formula One Grand Prix is held. 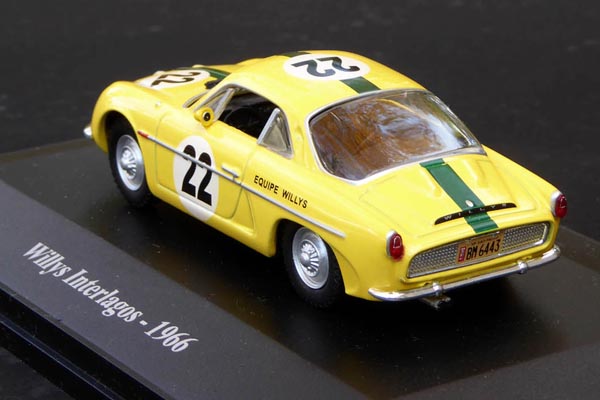 The Interlagos was based on the Alpine A108 from France, and in fact this 3-1/2" (9cm) model was also produced in France, by Eligor Models, as a revision of their Alpine. Its list price in 2007 was 10 Euros.

The car is painted in the livery of Equipe Willys ("Team Willys") and carries the number 22 used by Bird Clemente, who became Brazil's first professional race driver when he signed a contract with the team in 1963. 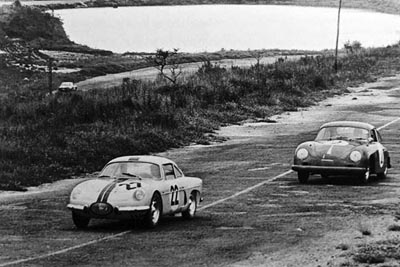 The Interlagos is chased here by a Porsche 90S during a 500-mile race at the Interlagos circuit in 1962. Both the car and the track were named after the São Paulo neighborhood between two lakes, where the Willys factory was also located.

In 1985 the track was renamed Autódromo José Carlos Pace to honor the Formula One driver who was killed in a plane crash in 1977, and who had driven for the Willys team early in his career. Another Willys driver who went on to Formula One was Emerson Fittipaldi. 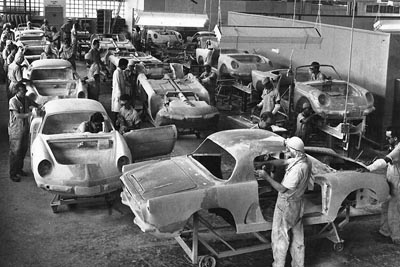 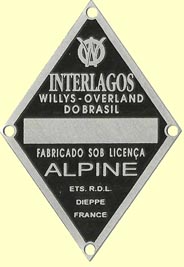 Willys produced only 822 of the rear-engine, fiberglass-bodied cars over five years, but the Interlagos was almost unbeatable in Brazilian racing in the mid-sixties. Photo courtesy Federico Cavedo. 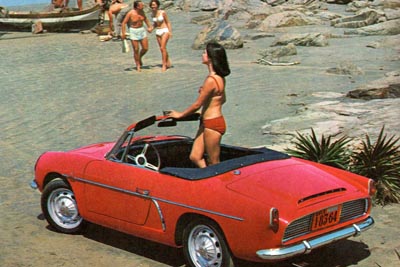 The fastback Berlinetta version (140K JPEG) of the street car was available with the 998cc Renault engine also used in the race car. Coupe and convertible versions came with smaller engines. This advertising image of the Cabriolet convertible is courtesy of Boîtier Rouge. 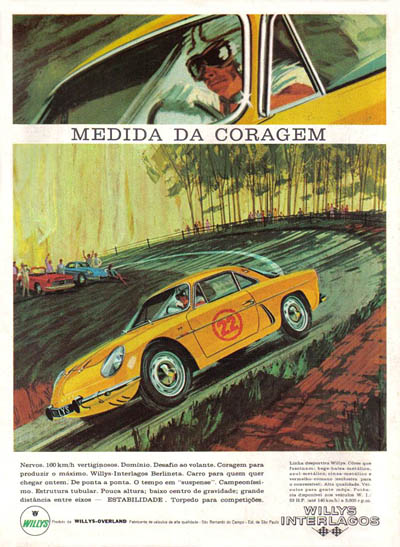 This Willys magazine ad titled in Portuguese Medida da Coragem ("Measure of Courage") cites the Berlinetta's rated speed of 160 km/h, and continues with a series of slogans including, "Challenge at the wheel. Car for those who want to arrive yesterday. Great champion. Torpedo for competitions."

It goes on to list available paint colors: metallic beige, blue, gray, and "Roman Red (exclusively on the convertible)." The car in the ad however, is painted racing yellow. And although it doesn't refer to Bird Clemente (70K JPEG) by name, the ad does appear to be referencing his fame in Brazil by using the number 22 on the car.

The ad includes a unique Willys logo -- a "W" formed by two chequered flags, in addition to the old "W-O" Willys-Overland logo, just above the Willys name. (The Brazilian company was still known as Willys-Overland do Brasil, a decade after Kaiser had dropped the Overland part of the name in North America.) 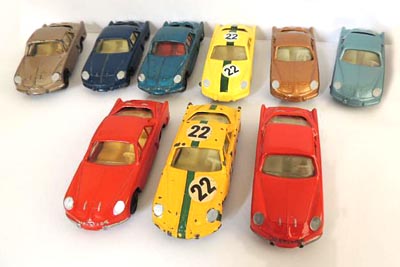 A 1/64-scale diecast toy produced in 1965 by Roly Toys of Rio de Janeiro, was sold in the various paint schemes. Perhaps the most popular version was the yellow Team Willys car 22. Photo courtesy of Mundo em Miniatura. 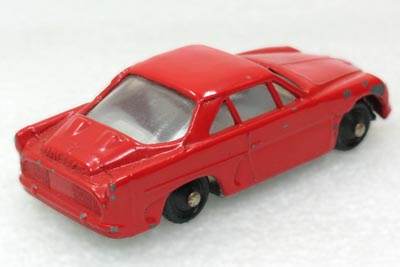 The Roly Toys model represented the Berlinetta, but also came in Cabriolet red. The casting included the Willys name on the rear. 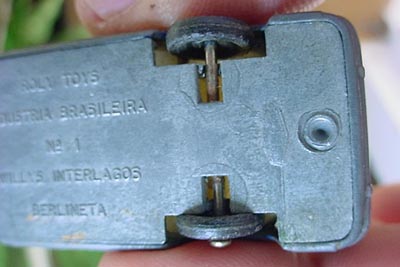 The Interlagos was the first of a total of 11 models released by Roly Toys during its five years of existence from 1965-70. Roly was also the first company to import Matchbox toys into Brazil. 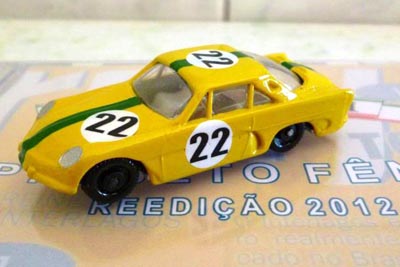 In 2012, the Brazilian company Automodelli produced a re-release of the Roly Toys Bird Clemente race car, in a limited edition of 100. It included the box (50K JPEG), a DVD and other bonus items. 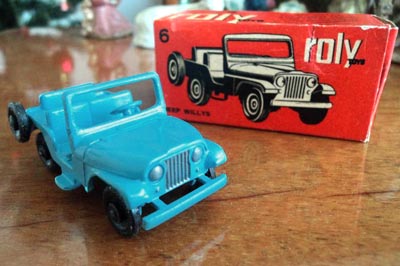 Incidentally, one of the other ten releases from Roly Toys was a 1/64 scale CJ-5, known as the "Jeep Willys". Photo courtesy of Mundo em Miniatura. 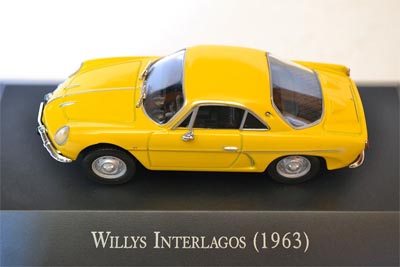 In the larger 1/43 scale more popular with serious model collectors, there are some other examples of the Interlagos. This 1963 Berlinetta was made in China by Ixo Models for their budget Altaya brand. 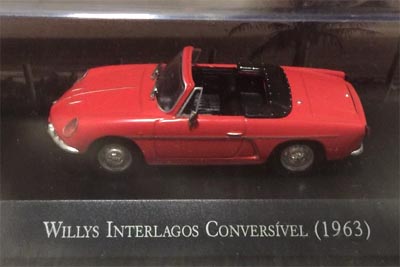 This 1/43 Cabriolet was another Ixo model. Their 2014 "Carros Inesqueciveis do Brasil" (Unforgettable Cars of Brazil) series also included the 1966 Aero Willys 2600, the luxury Itamaraty version of the Aero, the Willys Rural station wagon, and the Ford F-75 version of the Willys Pick-Up (60K JPEGs). 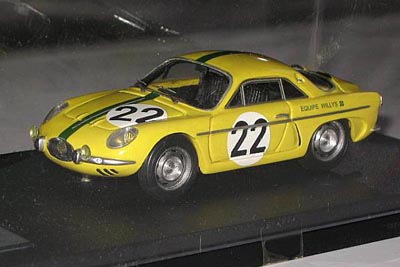 There was a more detailed 1/43 Interlagos race car released as a limited-edition kit in 2010 by Axel'R Models of France. They identify it as the version driven to 2nd place at the "12 Hours of Brazilia" in 1964 by Emerson Fittipaldi, and the list price is 70 Euros. 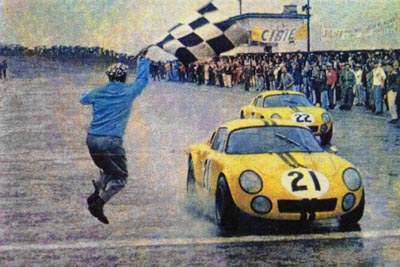 This 1967 photo from the "1000 Miles of Brasil" race at the Interlagos track in São Paulo, shows a one-two finish for Team Willys in a modified version of the Interlagos known as the Mark I. Drivers were Terra Smith and Luiz Bueno in 21, and Bird Clemente and Marivaldo Fernandes in 22. Photo courtesy Histórias que Vivemos.

By the way, this photo was not taken with a telephoto lens! See a wider view (100K JPEG) of the photographers at the finish, courtesy Flavio Gomes. 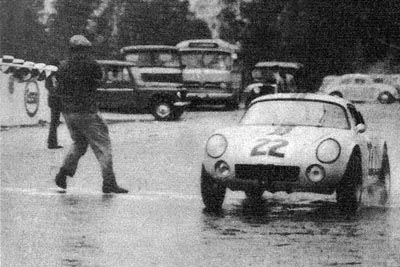 This photo of Bird Clemente's Mark I crossing a finish line, is a good one because it includes in the background a Jeep CJ-5 and a Rural, the Brazilian version of the Jeep station wagon. See more details on Jeeps in Brasil on CJ3B.info.

See Jeep Designers at Work: The Urge to Build Sports Cars for the prototype "Interlagos II" with completely new front and rear bodywork, as well as Willys do Brasil's 1963 Capeta ("Devil") prototype.