Chris Waters wrote from Australia: "I thought I would send some photos of a friend's Dominion Motors-built CJ-3B. It is owned by Col Watson and was built from a group of accumulated parts. He built the body in his shed using only a cowl and a firewall (he's a very talented man.)" 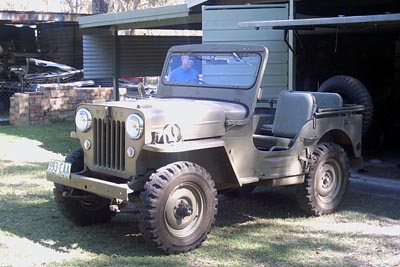 "The vehicle is a bit different, combining the best features of the 3B and the MB. It was built with practicality in mind, so it has an MB long-range tank and tool boxes, as well as axe and shovel pressings. It was used as a daily driver until not too long ago, and was used as the family holiday car including a trip to the very top of Australia (Cape York), a 10,000 kilometre round trip."

"He had a few original 3B parts; he had the cowl panel off one car, the firewall of another car and the windscreen of another. The front part of the grille is original, the rest he hand fabricated. 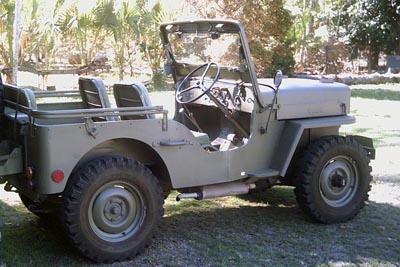 "The hood is a funny story in itself. Col's brother had a 3B and had seen a 3B hood from the side of the road in a town called Barcaldine, some 1000km from Brisbane where we all live. After some years Col was looking for a hood for his 3B and asked his brother if he had done anything about the one he saw. He said no, and the next time Col was in that area he went hunting for this hood and found it in a property -- it was being used as the side of a chook (chicken) shed.

"He saw the owner and explained he was building one of those Jeep things and would he sell him the hood. The man of the house was happy to sell it to him, knowing it was going to a good home, but when the lady of the house found out, she was more than just a little upset. Her reasoning was that it fitted so neatly around the nesting boxes. So in order to get the hood from her, Col had to travel back into town, buy some sheet metal and fabricate a new wall for the chook shed before he was allowed to purchase the hood." 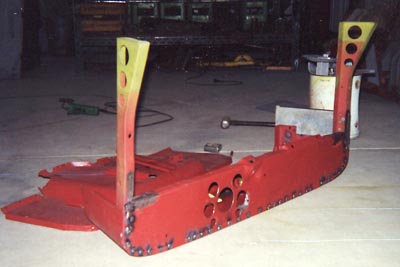 "Col's 3B chassis number is from a 1953 Dominion Motors-built vehicle and still has the plates etc. (I must ask him which one of the 3 it is!)"

"The rest of the body except the tailgate was hand fabricated from new sheet metal. As I said he is a very talented man. He has just finished a CJ-6 body where the only original parts are the cowl, the hood, and the firewall. No patterns, just hard work. He has also built 6 or 7 MB bodies from firewalls, and is about to start one for himself and one for his father." 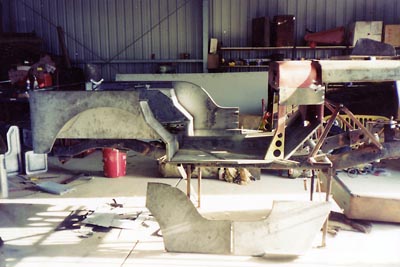 "As you can see Col used an old MB chassis as a jig and fabricated the tub out of zinc-plated material. See also a left side photo (120K JPEG).

"The build of the tub took about 150 hours due to the amount of hand fabrication. The only machines used were a guillotine and a folder. He had a die to press the axe and shovel pressings but everything else was done by hand. His theory was, I'm not building this to last 10 years I'm building it to last 50 years. Hence the use of the zinc steel. The front floor section was totally hand fabricated in 2 halves and joined prior to assembly." 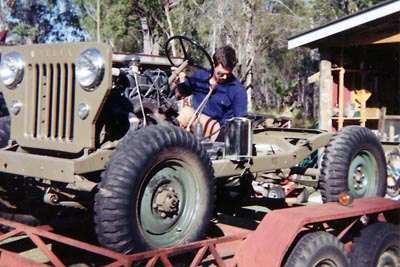 "This is when the chassis was built and the body was yet to be finished. This 3B is now 14 years old and has travelled over 50,000 miles since the rebuild and does not have any rust appearing whatsoever. 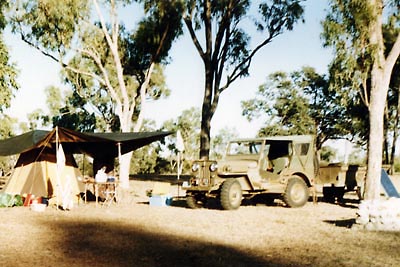 "This picture is taken at Elizabeth Creek at the top of Australia after a 4000km trip with Col's wife and 2 kids."

"He added the MB-type fuel tank and axe and shovel pressings. He also added tool boxes at the back and mounted the spare wheel on the rear. He built it to be practical for the trips he was wanting to use it for, with his WW2 military trailer." 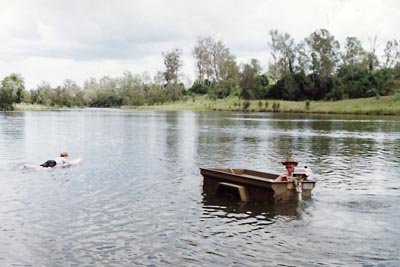 "Here Col is sitting in the same trailer, with an outboard attached. His son Rowan is on the surfboard. He mounted the outboard as a bit of a joke the first time, but found it to be quite a useful fishing vehicle." 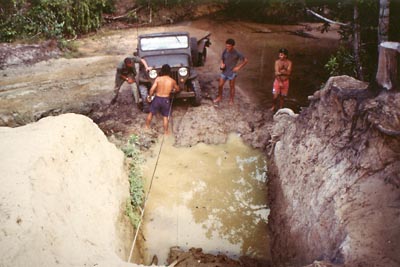 "Here's a place called Gunshot in far north Queensland. This is on the way to Cape York, and must be negotiated to get to the tip of Australia -- there is no easy road. Col's 3B is already at the top of Gunshot by this stage, and this is actually Col's brother's 3B (which Col also built using the same techniques as his own car). It's pulling a WW2 trailer built by General Motors Holden for the Australian army. This 3B sold 3 months ago on eBay after 15 years and 80,000 miles, for $15,000 Australian."

"Col has mentioned that during the build the hardest part was dealing with the 'Jeep' type people. At that time in 1992-93 nobody wanted 3B's and the 'Jeep' types wouldn't even talk to him when they found out he was building a 3B. For a lot of the parts he sourced for it, he had to get his brother who had a GPW to start them talking, and then ask about 3B parts.

"Things have certainly changed over the years. Now the 'Jeep' types don't talk to him because he modified it. But the truth is he saved it!" -- Chris Waters

Thanks to Chris for sending the photos and story in 2007. -- Derek Redmond