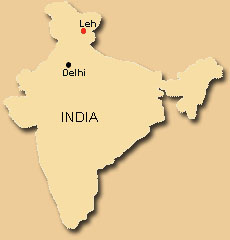 I took these photos in the town of Leh, in Ladakh, northern India, when I spent two months there in 1990 working on a documentary film. It's in the Himalayas, close to the border with Tibet, and the only road to the outside world is closed by snow for much of the year. The majority of the vehicles in Ladakh in 1990 were Jeeps, made in India by Mahindra.

The original, smaller version of this article was my first Jeeps Around the World web page in 1996. -- Derek Redmond 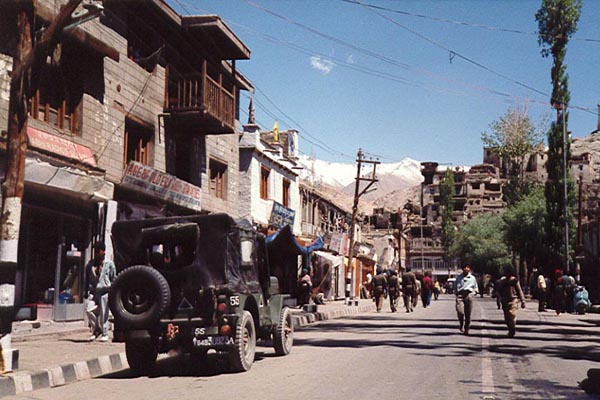 An Indian Army Jeep is parked on the main street in Leh as the soldiers take a stroll. The town is at an altitude of 3524 meters (11,562 ft.) which requires a few days to get used to. On the hill above the old town are the ruins of the former Ladakhi royal palace built in the 17th century. (See more about Leh at Wikipedia.) 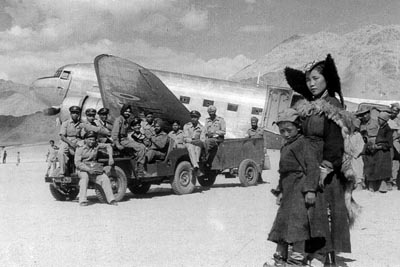 Not surprisingly, the first Jeep in Leh was an Army Jeep. But it was in 1948, well before Mahindra started building them in India. A remarkable 1948 photo courtesy of Bharat-Rakshak.com shows the first jeep arriving at the newly constructed Leh airstrip, the highest-altitude landing field in the world. The area was threatened by invading Pakistani forces in 1948, and only the relief flights by a few Royal Indian Air Force Dakotas prevented the fall of Leh.

At that time there were no roads into Ladakh, and most of the residents had never seen a motorized vehicle, let alone an airplane. The Leh airport today still requires arriving flights to spiral down into a small flat area surrounded by mountains -- quite an experience. 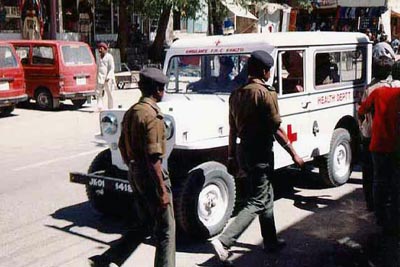 CJ-4 ambulance, model MM440: tales from westerners who have been in the hospital in Leh are scary, but it's probably better than nothing, and the roads into Leh from outlying villages are difficult even in summer. I can't imagine anything other than a Jeep trying to get through in winter. The Mahindra CJ-4 is a longer version of the CJ-3B, and was never produced by Willys. 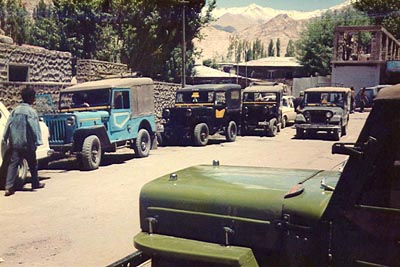 Taxis in Leh: most of the Jeeps in this picture are taxis; maybe the yellow line below the windshield means Yellow Cab? It's actually a Tibetan Buddhist gesture. All but one Jeep here are 3B's. 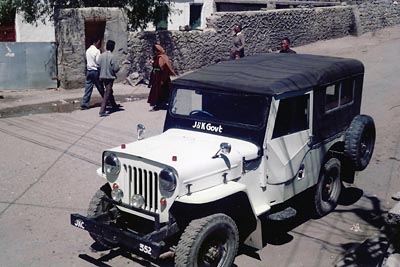 Government Jeep: reliable transportation for an official of the government of Jammu & Kashmir State, which includes Ladakh. Right-hand drive, so the spare is on the left side.

See also a video clip (4 MB) of the government Jeep as it headed into town on the highway. I'm not sure if you'd call it on-road or off-road driving, but it's pretty typical of Ladakhi drivers. The shot is taken from the film I was working on, called Ancient Futures. 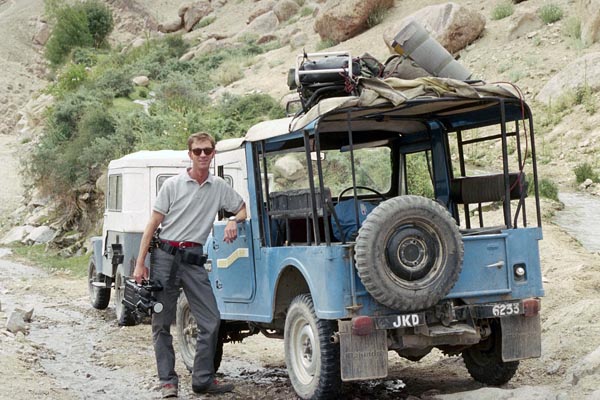 The film crew travelled in a couple of Jeeps when we headed up into the mountains for some of the documentary shooting.

Here I'm not wearing my hat, but I cut a circle of foam rubber out of one of the equipment cases, and put it inside the hat as protection from the steel framework of the canvas top, when I was sitting in the back and bouncing along the mountain roads. 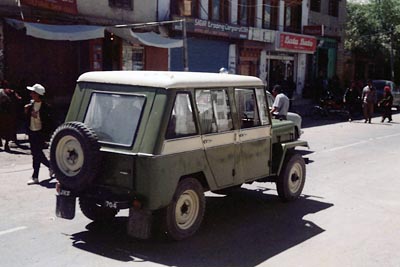 Four door CJ: this version with the fastback hardtop is still one of the most deluxe examples I've seen of the long-wheelbase Mahindra Jeep. 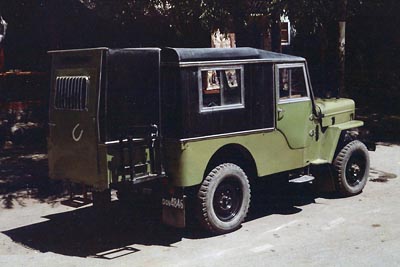 If you have the long-wheelbase Jeep and still need more room in the back, here's a solution. Unfortunately I didn't have a chance to check this one out in more detail. 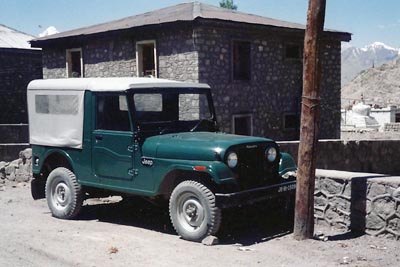 This photo offers a good look at a Mahindra MM540, which had CJ-7 doors but otherwise was similar to the Willys CJ-5.

Ram Rao describes the differences: "The length of the hood is identical to that of the Willys CJ-5. (Later AMC CJ-5s have a stretched hood.) The rounded fenders on the Mahindra are modeled approximately after the early CJ-5. The shape of the groove along the fender as well as the fender itself differs where the curved metal meets the radiator grille. The bulge in the center of the CJ-5 hood was also narrower and taller than that in the Mahindra design." 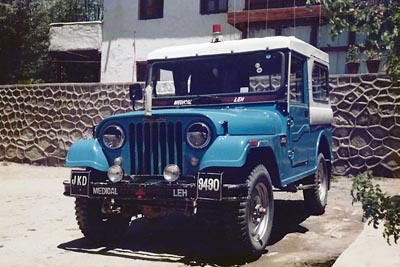 "The first and last (seventh) slot in the grille were squeezed to accomodate the large headlamp openings in the military M38A1, and the civilian CJ-5 used the same grille. The MM540 design on the other hand, uses smaller headlamps, and has all seven grille-slots identical to each other, like the CJ-3B (and later the Jeep TJ).

"The white fiberglass top is the 'Stallion' model made by ROPLAS, a Mahindra company."

This photo shows the Jeep of the Medical Officer in Leh. 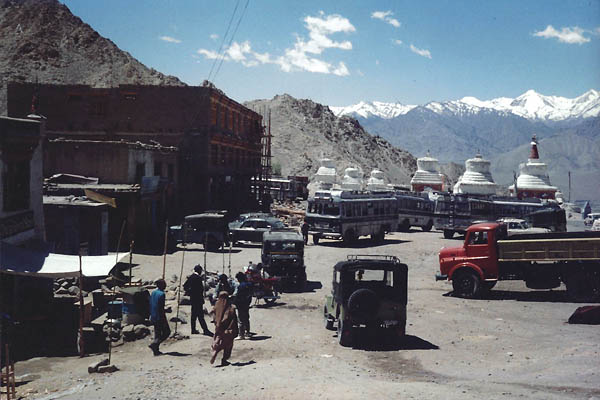 Jeeps come and go at the bus station in Leh in 1990. In the background is a series of stupas or Buddhist monuments, and in the distance the snow-capped Himalayas. 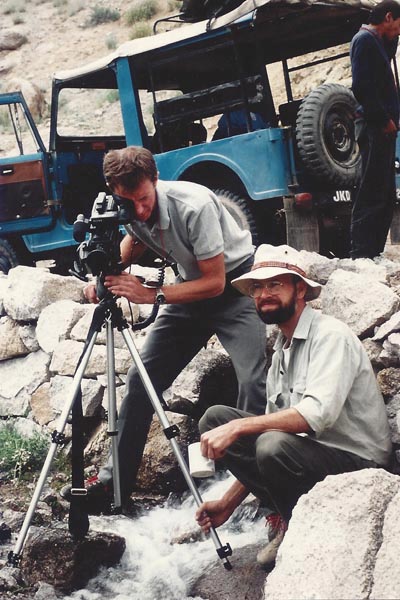 We travelled by Jeep to shoot interviews in outlying villages, and footage of the beautiful landscape. The film is about looking for ecological solutions from an ancient culture, which is now threatened by pollution and unemployment from western development.

We had to be a bit cautious, because Ladakh is also a high-security area, adjoining the frontline of confrontations with Pakistan and China. Photographing the police and military, who are all over the place, is frowned upon. 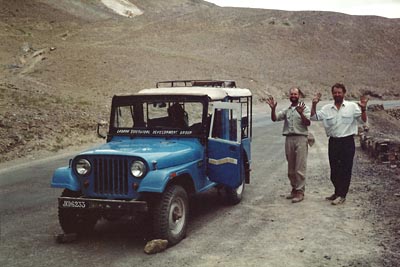 The director and producer got their hands dirty helping to change a tire on the MM540. 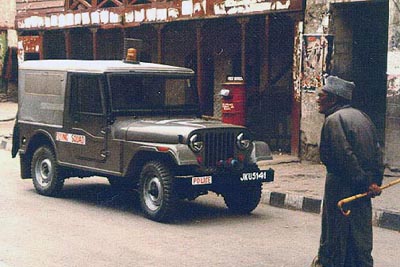 Because this Jeep belongs to the police, I took this photo from a distance and enlarged it here. You can just see details including wire mesh over the windshield and warning light, and the "Flying Squad" logo.


Ancient Futures: Learning From Ladakh was broadcast as an episode of the long-running TV series The Nature of Things. It is also in the DVD collections of thousands of universities, schools and libraries around the world, and has been translated into a number of languages.

Elsewhere on the web, see Mountainous Ladakh for more details and history of the region.