The Willys factory in Brisbane, Australia


The "Birth of a Jeep" Mural

Here's a mystery that I hope somebody in Australia will be able to help solve. A large mural depicting the story of how a Jeep is born, was reportedly located somewhere in the Willys facility in Brisbane in the 1960s -- but who was the artist, where exactly was it located, and what happened to it? Judging from the floor tiles visible in this picture, the mural (or this portion of it) may have been about 14 feet (4 meters) across. 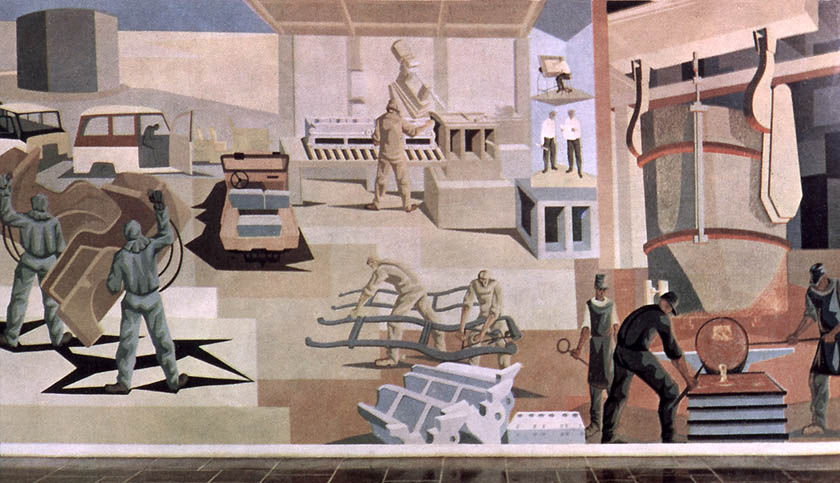 Lincoln Cushing, Archivist at Kaiser Permanente Heritage Resources wrote to CJ3B.info: "Henry J. Kaiser owned the Willys Jeep line of vehicles between 1953 and 1970, with manufacturing and assembly plants all over the world. Slides in our archives reveal a fascinating mosaic mural at the plant in Brisbane, Australia, circa 1963. It depicts the various steps in design, casting, manufacturing, and assembly for those iconic and rugged machines. The fate of this mural is unknown. It's possible that it was located at the headquarters at Evans Road, Rocklea, rather than the actual plant."

I have dubbed the mural "Birth of a Jeep" -- see a larger image (200K JPEG) for a better view of the details. The completed vehicle in the center, with a drawbar on the rear, appears to be a CJ-3B, and there is also a faint high hood silhouette in the background behind it. The body tubs on the left are CJ-5s, and there are some Station Wagon bodies on an assembly line. These are all models which were built by Willys Motors Australia. I'm not sure about the engine blocks in the foreground, or the frames in the center, which actually look like passenger car frames.

The photo below shows the front of the building where records indicate the mural was located; the Willys Motors Australia plant and offices in Brisbane, popularly known as "Building 27." The complex was just off Evans Road, which in the Willys era was in the municipality of Rocklea, and is now part of Salisbury. 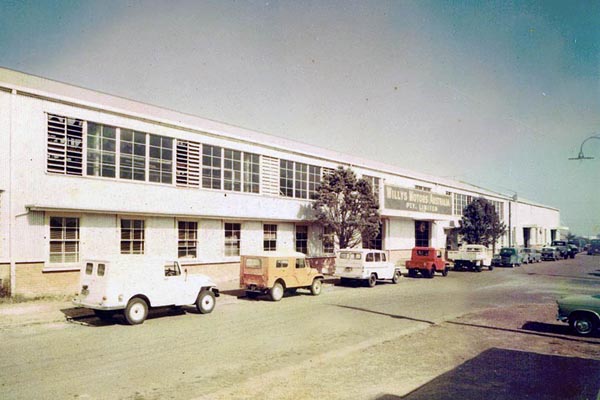 This early-1960s photo shows a CJ-5, CJ-6, wagons and trucks outside the main entrance on the north side, and is from former plant employee Barry Massey, via John Massey.

John says, "Note roughly one third of the building is not shown, on the left side of the photo. Building size was 5 acres under 1 roof. Vehicles out front are company units or demonstrators. Visitor entrance is beneath the sign and beside the red CJ half-cab." 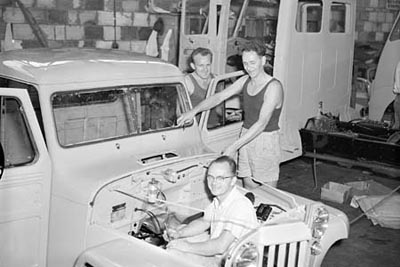 I wonder if these three employees might have been models for the mural. This 1959 photo was part of a series illustrating the contributions of immigrants to Australia. In the foreground is wirer Nick Balens from Latvia. Behind him are trimmers Werner Kudepp from Germany (left) and Thomas Wright from Northern Ireland. Photo by Don Edwards courtesy National Library of Australia under CC.


Willys Motors Australia folded in 1974, but Jeep Australia was set up as a subsidiary of American Motors in 1978 (see History of Jeeps in Australia) and assembled Jeeps again during the 1980s in the east half of Building 27, then known as Project Street, Salisbury. 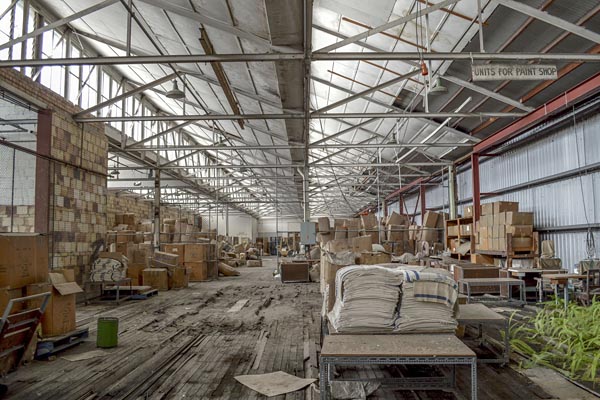 Much of the building was subsequently used as a textile factory (360K JPEG) which is now closed. The wooden floor, installed because it was originally a munitions plant during World War II, is deteriorating.

These 2014 photos reveal cement block walls similar to the background of the black & white photo above, and a hanging sign reading "Units for Paint Shop."

These two photos (right) look from Evans Rd. down Project St. to the entrance of Building 27 on Engineering St.

The black & white shot (70K JPEG) with a lineup of J-Series trucks, includes a new sign on the building which shows that the company was also importing vehicles by Fiat, Isuzu and Mitsubishi (who interestingly was manufacturing a large number of Jeeps in Japan under licence from Willys Motors.) The Google Street View image (140K JPEG) from 2017 shows that the west section of the building has been demolished. 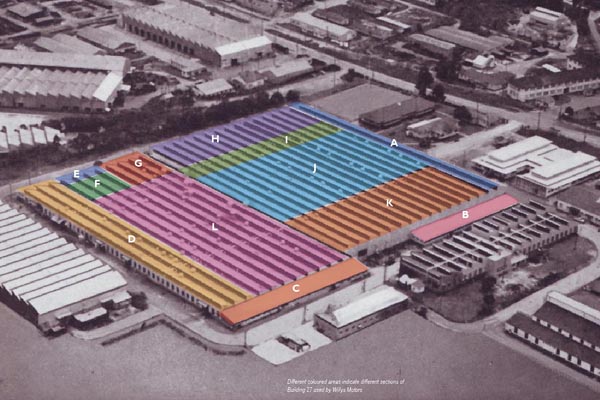 An undated aerial view of the factory shows the full extent of the 5.5-acre facility on the south side of Brisbane. Evans Road crosses the upper right of the photo from left to right, with Project Street running one block down from Evans Road to the plant entrance at the center of the north side.

Different areas of the plant are identified by color in the large version of the photo (370K JPEG), published in Jeep Action magazine in May 2010. 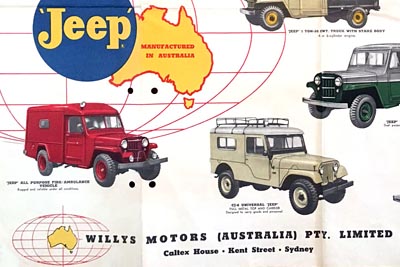 Willys Australia also had an office on Kent Street in Sydney, which was listed as their address in some advertising, but there is no indication in the archives that the mural might have been located there. It also seems unlikely because Willys did not own the building, which was Sydney's first high-rise office tower, known as Caltex House (130K JPEG).


A Visit From the RAAF

The photo below, from Vaughn Becker's collection, probably dates from 1958, a busy year at Willys in Brisbane, as a thousand CJ-3Bs arrived on ships from the United States (see the story of the first shipload, at Christmas 1957) to be assembled and marketed in Australia (see Promoting the Australian-Made CJ-3B.)

This picture shows a group of people including three military officers having a look at one of the new, right-hand-drive CJ-3Bs. I'm guessing they would already have been shown the impressive mural as they entered Building 27, if the mural was in place as early as 1958. 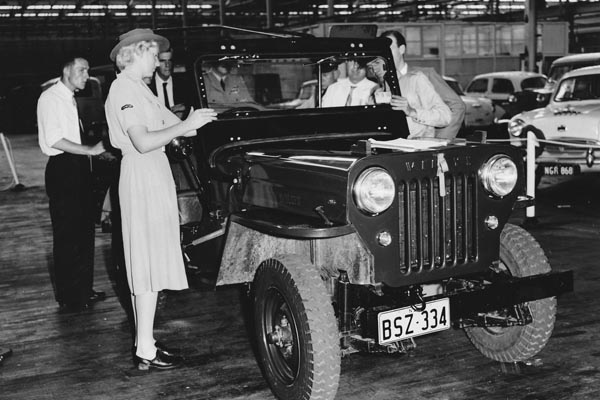 The intriguing photo looks like it was taken in the vehicle dispatch area of the plant (section "K" above.) There's a block of offices in the background, as well as a Willys truck and a few British cars, one of which shows a local Queensland license plate from the late fifties.

The Jeep has a New South Wales plate, suggesting it may have been in use at the Willys offices in Sydney. The visible dirt clearly shows that it's not straight off the production line.

The two-bladed propeller badge on the sleeve of the woman in the foreground (see the large copy of the photo, 270K JPEG) identifies her rank as Leading Aircraftwoman (LCW) in the RAAF. (The propeller badge would later be changed to a single chevron.) So why is she inspecting the Jeep with three officers? I would guess she's their driver and they've asked for her opinion, and maybe she's going to take them for a test drive.

John McRae, manager of the Brisbane plant, is standing on the left, looking a bit nervous as the LCW and one of the officers struggle with the folding windshield. The black windshield frame and the style of tires indicate a civilian Jeep, although the shovel below the driver's door and the lifting rings on the front bumper suggest it may have been prepared for the military inspection. But it's certainly not the vehicle that was used for the 1958 Australian Army CJ-3B Trials. The RAAF did purchase some CJ-3Bs, primarily for light duty on air bases, whereas the Army standardized on Land Rovers. 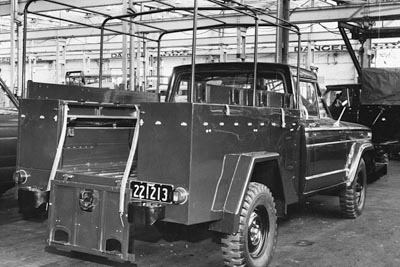 A later photo on the shop floor, taken in 1967, shows some of the sixteen blue J200 trucks built for the RAAF. John Massey comments, "Note the background rail with "DANGER" signage; this and the foreground rail provided overhead crane transport from the front of the building to almost the rear wall. Beneath this, under bond CKD packs from the USA were stored." 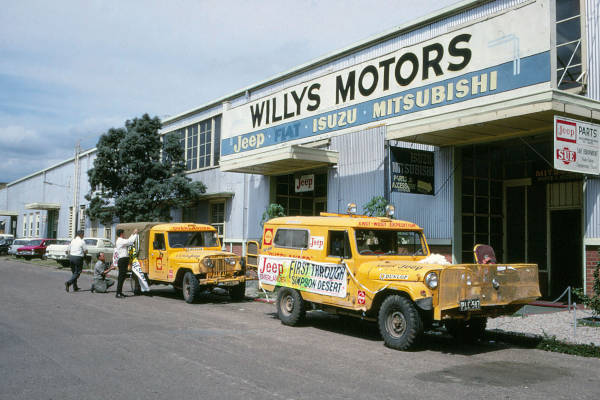 This color photo of the main entrance to the plant dates from 1969. The occcasion is the completion of the Simpson Desert Expedition. The two specially-prepared vehicles provided by Willys for the trip are the "Overlander" version of the CJ-6.


What happened to the mural?

Although part of Building 27 is still standing as of 2017, there appears to be no trace of the mural. Was it torn down with the west side of the building? I have been unable to find anybody who recalls seeing it in the plant. I would welcome any further information. 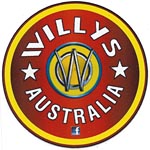 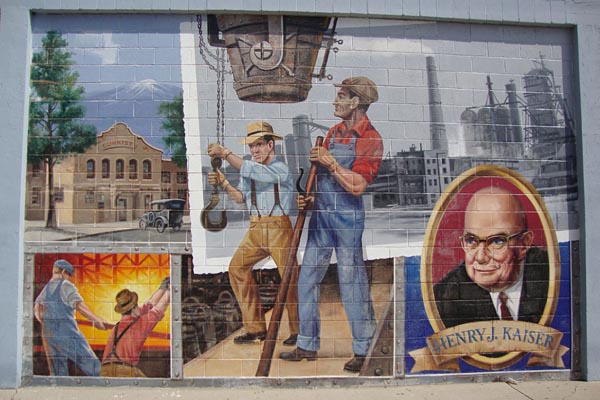 While I'm talking about murals connected to Henry Kaiser, it's perhaps worth mentioning a mural in four panels which represents the history of the city of Fontana, California, including founder A.B. Miller, the citrus industry, the Kaiser steel mill (seen here) and the NASCAR racetrack.

The 1400 square foot mural was created in 2005 by artists Enrique Vidal and John Thongnoi in acrylic on the side of a building in Fontana. See more details at Waymarking.com.

Last updated 14 May 2018 by Derek Redmond redmond@cj3b.info
https://cj3b.info/World/KaiserMural.html
All content not credited and previously copyright, is copyright Derek Redmond