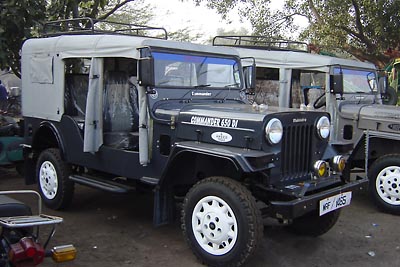 As of 2005, the CJ-3B design continues to live on in a few "CL" and "Commander" models built by Mahindra & Mahindra in India. This photo of a brand new Commander 650 was taken in October 2003 by Pal Singh outside a Mahindra dealer in Delhi, India.

You have to give credit to the company and their importers on several continents, for persistence and imagination in seeing the continuing value in some great old Jeep designs, and trying to expand the market for them. See Mahindra Jeeps on CJ3B.info for lots of photos from their ventures into markets including the U.K. and Australia.

Here are some interesting behind-the-scenes stories about those efforts, and a few samples of their advertising. 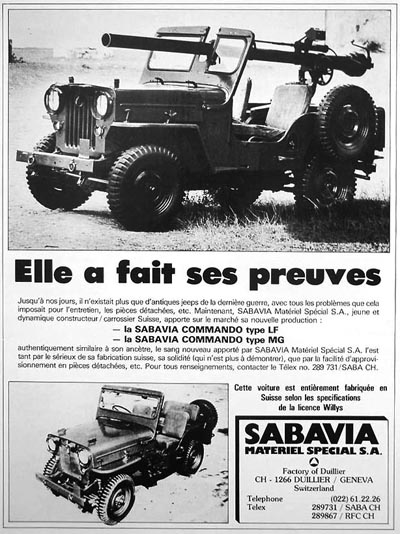 Federico Cavedo found this 1982 advertisement from a French-language military magazine, headlined "Elle a fait ses preuves", or "It is Proven." It promotes a military 4x4 called the Sabavia Commando, available with or without recoilless rifle.

The ad states, "This vehicle is entirely fabricated in Switzerland according to specifications licensed by Willys." However, it's pretty clear that these are Mahindra Jeeps -- see Military Jeeps in India on CJ3B.info, for photos of identical vehicles.

I have never seen any other mention of Sabavia, or what their arragement with Mahindra might have been. More information is welcome.

A mention of the 1997 U.S. Customs auction in New Orleans which offered 70 confiscated Mahindra Jeeps apparently intended for Dolly Parton's "Dollyland" theme park (see Importing Jeeps Into North America) sparked some reminiscing by John Amer, formerly of UK 4x4 Ltd. John says, "I saw the Mahindra 4x4s that you said were in the States in 1997 -- they were stored at Manchester Docks, Houston, Texas. I had flown over to have a look with a view to buying them for import to the UK. At the time we were the UK importer of Mahindra."

John continues, "All engines in the U.K. Mahindras were Indian-built 2.1cc apart from a few at the end which were 1.9cc French built, as the old 2.1 engine would not pass new regs. These last 19 vehicles were shipped in from Bombay -- all others were built in Greece. The best of the Greek-built ones were because of my tie up with Mr. Bernie Grant who lived in Athens -- he was around Mahindra about the same time as me, which was about 1989-90, and Bernie gave Mahindra manager Vijay a headache most days.

"Most of the things I read now about Mahindra are a bit adrift. The American Indian names (the 'Indian Brave' CJ-3B and the long-wheelbase 'Indian Chief') were thought up by a friend of mine who was the first importer, Roger Bastable. He is a great chap who still sings in his rock band called Rave to the Grave.

"My friend Tom thought up 'the legend lives' thing in the White House Pub, and we put it on things like lighters. On one trip to just outside Athens with Bernie and his greek pal Lefderas, I gave a lighter to the man who made all the seats for the Euro spec vehicles, and he scanned 'the legend lives' and sewed it into the seats thereafter. I could go on and on.

"I used to go to India quite a lot to talk with Mahindra and on one of my trips I came across 99 CJ's in Australian spec ('Bushrangers') that had been sent to Ausie and bought back as the importer had gone bankrupt. After 2 years stored on the company football pitch they were in bad shape. I did a deal with the vehicles refurbished and delivered to Rotterdam -- they had to be day plated there as they were not EEC spec. They turned out to be the best we ever had." -- John Amer 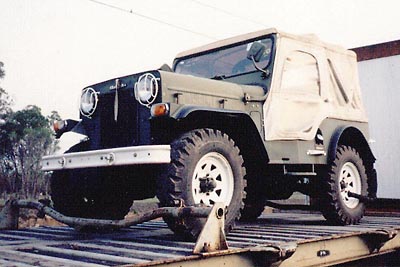 Speaking of Jeeps orphaned by the collapse of the Australian distributor, Jon Rogers spotted one which wasn't lucky enough to make it back to India:

"I was catching up on some reading on CJ3B.info, then realized I had taken some closeups of a Mahindra, must have been in the mid-1990's. This one I found on a railway siding near Maryborough, Queensland. Looked a little worse for wear... then it hit me: it was brand new. And if you look at the rust coming through the mesh on the front grille, in not the best condition. But I thought you might like to have some close ups of the bits and pieces, inside and out." -- Jon Rogers 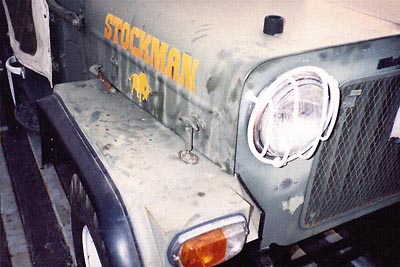 This detail shot shows the hood logo, headlight guard and grille cover, all features which were intended to appeal in Australia.

See also Jon's photo of the toolbox behind the seats (50K JPEG).

Brian Halberg in Perth, Western Australia says, "I had a 1990 Bushranger -- there were about 350 Mahindras imported into Oz between 1990 and about 1992." Interestingly, he also mentions some more recent arrivals which may actually be the Jeeps from the New Orleans auction. They remained unsold for some time after the original auction date, but Brian says, "There have been some recent imports of Mahindras which were originally US specs and left hand drive, but didn't meet US regs. They were brought to Australia and sold recently at auction for 'Farm Use Only' as they can't be registered here either."

Coincidentally, Brian was on the spot for the beginning of the Stockman saga, and tells this story:

"Probably not enough credit for the Mahindra making it to Australia goes to Alan Baker of Perth (by way of Newdegate, WA) for he was the one that had the passion for the vehicle and truly believed it was suited to the Australian conditions.

"As a Canadian backpacker staying at a hostel in Sydney in November 1985 and only in the country 5 days, I got a chance to be part of Alan's big adventure. He called the hostel and told the manager he was looking for a co-driver to Perth. With no other takers, I jumped at the opportunity. I hadn't even driven on 'that' side of the road yet but he took me on.

"He was towing a 25-foot trailer loaded with the carcasses of two other Mahindras which had been the subject of ADR testing in Sydney. His tow vehicle was a bright red Mahindra powered by a 4.1 litre Falcon motor and a top loader four speed. Anyway we had a blast." -- Brian Halberg 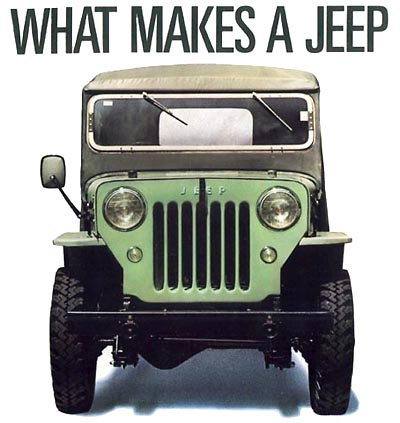 Mike Lawrence in Southampton, England has an olive drab Mahindra which made it to the UK via Australia, and which he was told was "originally one of the ones built for the Australian Army. I would be interested in tracing the history of the Jeep. I took it to an offroad event organised by Land Rover. It was rather enjoyable and it managed to triumph over many other vehicles in its class with the exception of race-prepared Land and Range Rovers. I left the event with a smile on my face."

Well, I had never heard of Mahindra supplying the Australian military, and neither had Jeff Spencer who scanned the Bushranger brochure for us (see Mahindra Jeeps in Australia). He figures the Jeep in the U.K. was originally a Stockman similar to the ones in Jon's photos above, and says, "The Stockman had an olive green soft top and was dark green in colour (I don't think any other colour was available in this base model.) The paint as I recall was gloss not matte, but they certainly look 'army' -- my 3B is often called an 'army Jeep' because of its colour (and condition perhaps)."


The "What Makes a Jeep" illustration above is actually from a brochure produced in New Zealand! I don't know how many Mahindra Jeeps were sold there, and the venture may have been completely independent of the Australian importer, since the advertising and available models seem to have been different. 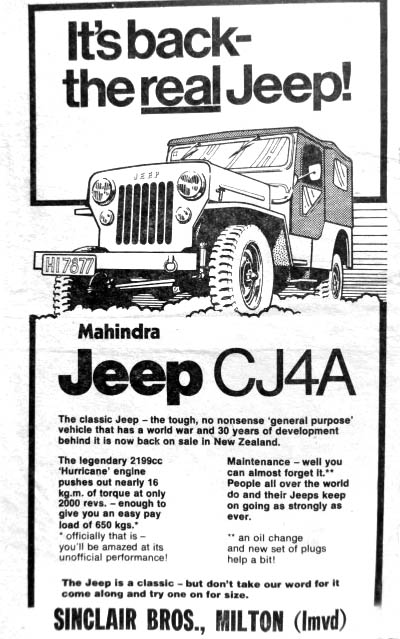 This old ad from a Licensed Motor Vehicle Dealer (LMVD) in Milton, near the southern tip of New Zealand, is somewhat misleadingly headlined "the real Jeep!", and dubs the gasoline-powered model the "CJ4A" although it doesn't appear to be a long-wheelbase model.

Kynan Gray found this clipping, and said, "I think it's from the 70s but not sure. There must have been a number of them imported into New Zealand around that time. My father and I both have one -- Dad's is factory extended with deck."

The license plate prefix "HI" would suggest a 1975 New Zealand plate (Wikipedia) and the flat front fenders without dog ears also support Kynan's guess, but that would have been one of Mahindra's first export deals, much earlier than the Australia initiative in the 1990s. It would be interesting to know the story behind that. I do know that 4WD Fibreglass in Hamilton, New Zealand has done good business making replacement tubs for Mahindras.

The effort to make an impact in Australia was probably Mahindra's best try at moving into a new market, with model names and features (e.g. dual gas tanks on the Bushranger) chosen for conditions downunder. But success was elusive; the locals were perhaps suspicious of an imported vehicle trying to seem so Aussie. 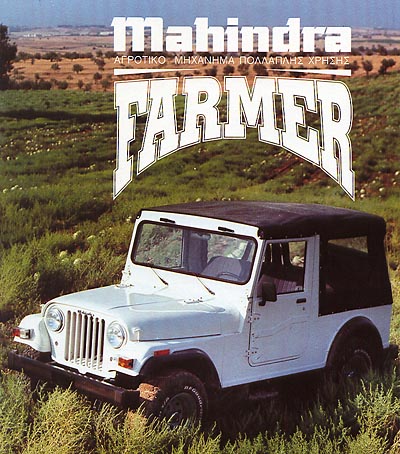 In Europe, Mahindra probably never had a chance. The models were named oddly (e.g. Indian Chief, Bahia, or Farmer), the advertising seemed out of touch, and the vehicles were criticized for poor workmanship.

If they were going to sell anywhere, it should have been in Greece where many of them were assembled (with parts largely imported from India.) Various marketing approaches were taken there, including the revival of an idea that Willys had given up on in North America in the 1950s, the "Farmer" Jeep. The name is in English, but it's not clear that it was ever used anywhere except in Greece. This Greek brochure includes photos of a rear PTO and farm machinery being operated from it (100K JPEG).

Another Greek brochure was headlined American Style (100K JPEG), at a time when majority political sympathies there had already shifted away from the U.S. 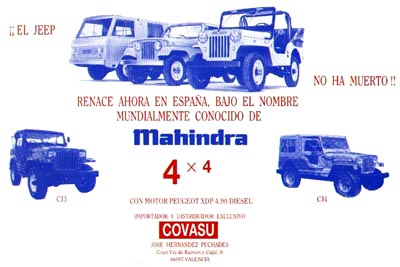 It had only been about five years since production of Avia Jeeps in Spain had ended, but the importer there clearly thought there was still a market, and used a Spanish version of the slogan "the legend lives" -- "El Jeep no ha muerto" (The Jeep is not dead.) It goes on to say "Born again in Spain, under the world famous name of Mahindra 4x4, with Peugeot XDP 4.90 diesel engine." The most prominent illustration in this ad is not the Mahindra version, but the Jeep Campeador, Commando and Bravo CJ-3B built by EBRO. Thanks to Jaime Gomis for this ad.

See also a brochure cover from Germany (30K JPEG), where Mahindra did have some limited success. 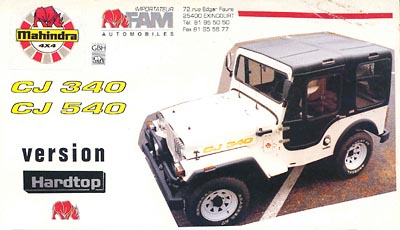 Praveen Prabhu in India came across this ad from France which gives some insight into a different approach there, where Hotchkiss Jeeps had been out of production since the mid-1960s. The distributor FAM displayed the Jeep as a very modern recreational vehicle, equipped with an aftermarket fiberglass top. But they apparently had little success, perhaps because Jeeps in France have always been so strongly identified with the thousands of surplus MB's which remained there after World War II.

Well, it's a saga full of colorful entrepreneurs who did their best to sell Mahindra's products outside India. Maybe we just have to accept the fact that an appreciation for what is basically 1950s design and technology is always going to be a minority taste. People may turn their heads and smile when a Willys goes past, but most of them don't really want to drive one every day.