Dating a CJ-3B by Interior Details

The CJ-3B was produced almost unchanged by Willys Motors and Kaiser Jeep for nearly fifteen years. But in cases where the original serial number is lost, or someone is trying to determine if a part is correct for a particular Jeep, there are some clues to determine at least the approximate year of production. This page covers the interior of the Jeep, and a future page will detail mechanical and exterior body changes.

Half of the Jeeps currently registered in the CJ-3B Serial Number and Engine Number List are 1953-54 models, built prior to the debut of the CJ-5. The lack of reliable figures from the 1960s makes it difficult to estimate total production, but certainly many of the CJ-3Bs surviving in North America are from the first few years of its production. They are usually easily identified by the presence of five separate gauges on the dashboard, similar to earlier Jeep models. The 1956 Parts List lists both metric and Imperial gauges -- see CJ-3B Universal Jeep Specifications for details.

The L-shaped parking brake handle is consistent with this period or with the late 1950s. Some handles were mounted below the dash rather than through it -- I am unsure exactly when this was done. Brake and clutch pedals throughout the 1950s were painted metal.

The driver's seat was mounted to the floor of the Jeep. See Take A Seat, Please for more details on CJ-3B seats.

The starter switch was also floor-mounted, separate from the keyed on/off ignition switch. According to the 1965 Service Manual, the floor-mount switch was used until the five gauges were replaced.

1953 and early 1954 models had a standard square cutout in the floor between the seats for the PTO lever, covered by a plate if no PTO was installed.

Perhaps the most obvious change during the history of the CJ-3B was the introduction of the new instrument cluster (30K GIF), shortly after it appeared in the new CJ-5 model. The five gauges which were essentially the same as had been found in all earlier CJ's, were replaced by a speedometer with integral fuel and temperature gauges, and warning lights for amps and oil pressure, early in the 1957 model year.

Willys documents suggest this began with VIN 57348 34452, but owner Tom McAfee has reported the cluster is installed on his CJ-3B 57348 35422. The new- and old-style dashes may have been interspersed on the assembly line for a while. The first 3B's that had the cluster had the King Seeley version with a silver center and the word "Willys". Apparently about a year later it was replaced by the plain black Stewart-Warner cluster.

Another feature adopted from the CJ-5 was the driver's seat mounted to the side of the body rather than the floor pan. The seats were also now fully upholstered.

Distinguishing features of the late-model CJ-3B include a T-shaped parking brake handle (16K JPEG) high on the dashboard, replacing the pull-and-twist L-shaped handle. A survey of readers of CJ3B.info has narrowed down the introduction of the new parking brake to between VIN's 57348 71944 and 57348 76077 in the 1961 model year. (Right-hand-drive CJ-3Bs assembled in Australia were fitted with the T-handle brake starting in 1958.)

Other changes introduced at about the same time, were rubber covers on the brake and clutch pedals, and a full size rubber cover on the horn button (see a larger photo, 100K JPEG.)

The new, optional heater was introduced, apparently during the 1959 model year, with an exterior fresh air intake and a windshield defroster. The intake was through an approx. 4" hole in the right side of the body, covered by a wire screen. If the new heater was not installed, the hole was covered by a round metal plate (20K JPEG). A photo of the late Janet Wathen Clark driving a brand new 1961 3B (100K JPEG) shows the plate painted black.

The hose for the defroster passed through an approx. 2 1/2" hole in the dash above the steering column, which was covered with a metal plug if the defroster was not installed. The February 1962 Jeep Universal Parts List lists it as the "Heater and Defroster, Fresh Air" including the defroster hose, windshield-mounted defroster manifold, and air inlet screen. We have narrowed down the introduction of the holes in the bodywork to between VIN's 5734851099 and 5734853243 in 1959.

Interior Options Available in All Years 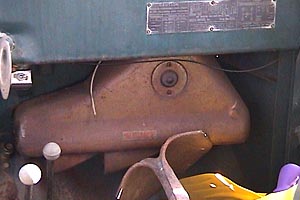 The 1962 Parts List also still listed the standard Harrison heater, which did not have the fresh air vent controls, and was controlled only by a three-speed switch (15K GIF) mounted below the dashboard. The parts lists do refer to a defroster hose for it, which was apparently attached to the heater by a duct adapter (40K JPEG). 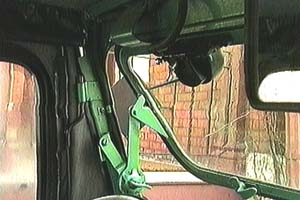 Another type of ventilation available on some CJ-3Bs is the swing-out windshield, a less-radical alternative to folding down the entire windshield frame. The 1956 CJ-3B Parts List listed two types of windshields as available on the CJ-3B: a standard one and a "Ventilating Windshield Kit", which includes hinges, latches to hold it shut, wiper hardware, and arms with an adjusting screw on each side to hold the glass anywhere from slightly open to nearly horizontal. See an inside view of the adjusting screw (50K JPEG) and outside view (120K JPEG). Thanks to Dan Walton for the photos.


The ventilating windshield was a holdover from earlier Jeep designs, and was available from the beginning of the CJ-3B. It was perhaps felt to be important due to the lack of the rectangular vent which had been located below the windshield on the CJ-3A. However, it is an option that was apparently seldom delivered except on the military CJ-3Bs and M606s.

See also a photo of the ventilating windshield folded down (50K JPEG). 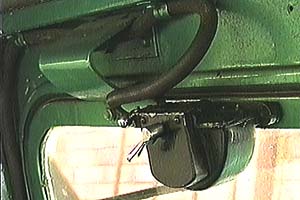 Twin vacuum wipers were listed in the Parts List as available on either type of windshield, as was the vacuum wiper / manual wiper combination. Note that the wipers on the ventilating windshield are mounted above the glass rather than below -- see dual vacuum wipers on a U.S. Navy CJ-3B (30K JPEG).

A optional "two-tone gray" sun visor was also listed in the Parts Lists.