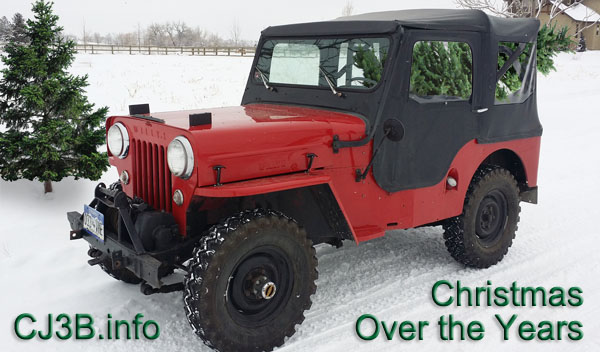 We've published quite a few Christmas stories and snowy photos over the years that CJ3B.info has been on the web. I've collected them here for your holiday reading.

20 Cubic Feet of Firewood -- cutting wood and hauling it in a 3B.

Christmas Village CJ-3B -- a porcelain 1954 Willys for your annual display.

A Visit from St. Nicholas, in his Jeep -- a familiar poem updated.

Christmas in the Maine Woods, 1958 -- bringing in the tree, listening to Elvis.

Christmas in Three Rivers -- a poem based on a real Jeep.

Kids in Jeeps -- what everybody wants for Christmas.

Winter in Camprodon -- a Christmas card from Spain.

UN Jeeps in Lebanon, Christmas 1980 -- as we think about our troops overseas.

Postal Jeep Toys -- there seems to be a Christmas connection.

Christmas Tradition -- the Wades in the parades.

Snow is the Maine Attraction -- Jon and Jason go trailblazing.

A 3B and a Shack -- a Jeep Story from the Northwest, by Rich Mylar.

A Cup of Dice -- another Rich Mylar story for Christmas.

Tracks in the Virgin Snow -- a nail-biting CJ-5 story by Oldtime.

High Hood in the Snow -- Derek's snowplow and Christmas tree.

Thanks to everybody for the photos and stories. Thanks to Steve D. Martin for the red Jeep photo.