Here's a great project, conceived and executed by Willys America in Cazadero CA, with their local fire chief.

If you're going to do a complete resto on a Jeep, and you're looking for something a little different, why not build a fire service Jeep? People take old CJ's and turn them into military Jeeps all the time. A fire Jeep doesn't necessarily have to have a pump and hoses; the idea here was a chief's car. The "Fire Patrol" CJ-2A was a big hit at the Specialty Equipment Market Association (SEMA) show in Las Vegas in 2014. 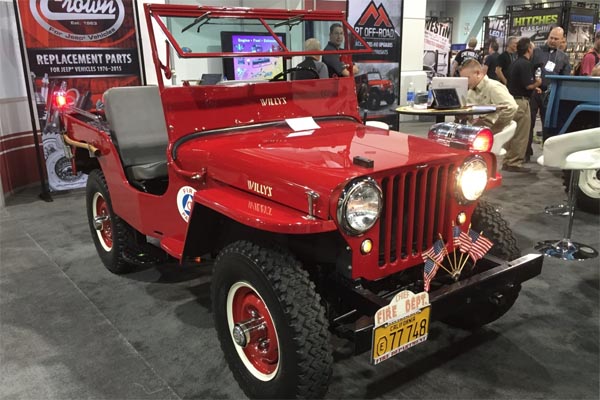 "Did you see the Fire Jeep?" was heard more than once at SEMA. This fire department prepped '47 2A in the Crown Automotive booth was an absolute gem on the floor of the off-road hall. Amazing condition and it stood out perfectly as the great grandaddy of all the JKs. 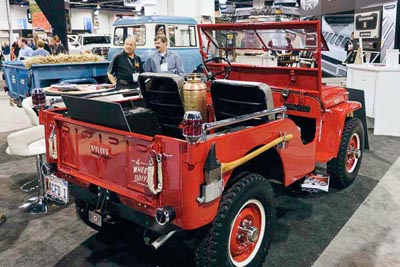 Quadratec also featured the CJ-2A on their website, as one of their favorites from the show.

Willys America typically uses some Crown parts in all of their restorations, so putting the Jeep in the Crown booth at SEMA was a good attention-getter for everybody. 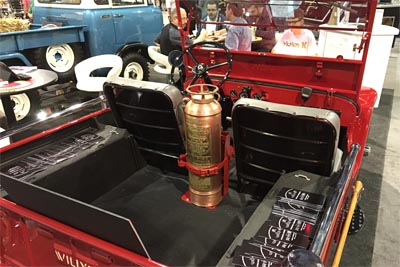 A few accessories were added to enhance the impression of a real piece of fire apparatus. The fire axe, shovel and soda-acid extinguisher give the Fire Patrol a bit of suppression capabiility, for any small incidents where they might be first on scene. The dashboard gets a two-way radio and a switch for the siren. 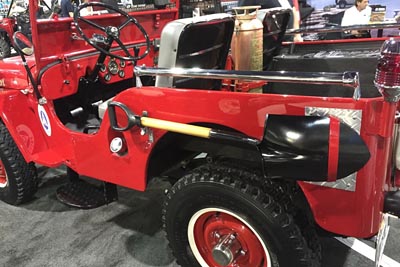 The top bow supports on the rear corners, which seldom serve much purpose on a Universal Jeep, make a great place for some warning lights. And the "Civil Defense Fire Patrol" stickers on the cowl turn the Jeep into a perfect companion piece for Willys America's Rescue Truck. 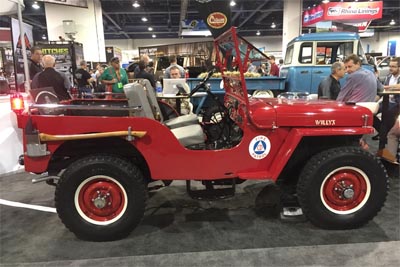 Paul Barry of Willys America says, "The 2A belonged to Steve, our local fire chief. It was a hunting Jeep when he purchased it and we restored it as a fire chief's buggy just for him. It had no original history as a department-owned vehicle, so you would probably call this a clone car in the collector car world. He kept it for several years and then decided to sell it. My wife wanted it, so now it's hers!" 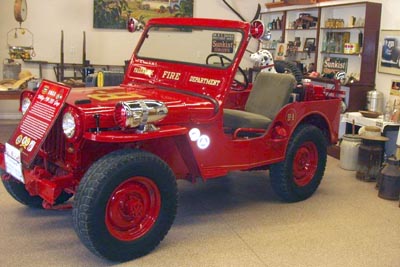 If you decided to do a fire service restoration, you could either freelance the design as Willys America did, or base it on a real historical vehicle, as the Crown Firecoach Enthusiasts did with this example further south in California. They used an M38 to clone the Jeep once used by the first Fire Chief of Fallbrook, and donated it to the Fallbrook Museum.

Other possible Jeeps to clone? How about the U.S. Forest Service, the Border Patrol, the First Popemobile, or some of the ideas in The CJ3B Page Collection?

Thanks to Paul Barry at Willys America, Quadratec for the show photos, and Karl Klotz for the Northwest Homer photo. -- Derek Redmond