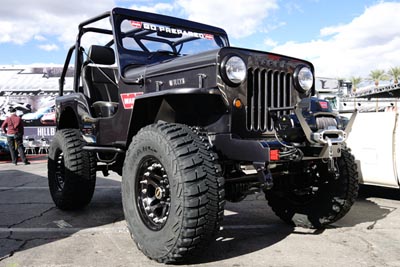 In the parking lot at the 2014 Specialty Equipment Market Association show in Las Vegas, Warn Industries displayed a customized CJ-3B with some very modern running gear, which attracted a lot of attention despite not being as wild and crazy as some of the dozens of other modified Jeeps on display at the show.

Wayalife.com posted a lot of photos, and said, "Without question, this Willys Jeep that WARN brought out with them to the 2014 SEMA was by far one of the nicest and cleanest Jeeps I have ever seen, bar none. Oh how I would love to own this amazing piece of old iron." 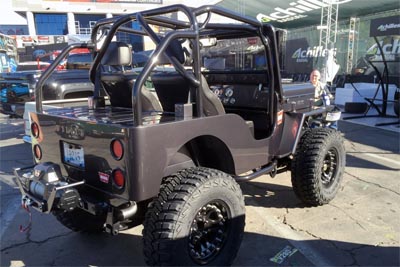 Quadratec also took photos, and commented: "This may be one of the most beautiful Willys you'll ever see."

Warn has made the Willys heritage obvious with an additional WILLYS stamping where the tailgate used to be. They've gone with a nice lockable bed cover (280K JPEG) for rear storage. Of course there are winches front and rear. 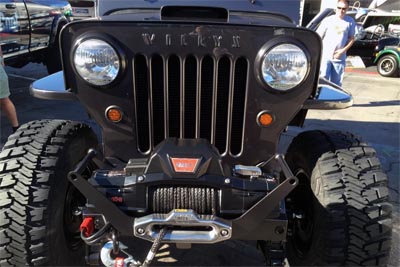 Warn brought the CJ-3B to show off their Zeon Platinum winches with new high-speed motor, stronger gears, and a heat-treated ring gear. They have a wireless remote that not only spools the cable in and out, but also allows you to unlock the clutch and free spool the winch remotely.

Back in the 90's, Warn also used a high hood to advertise their XD9000i winch (see CJ-3Bs in Magazine Ads.)

And see the front end below the winch (140K JPEG). 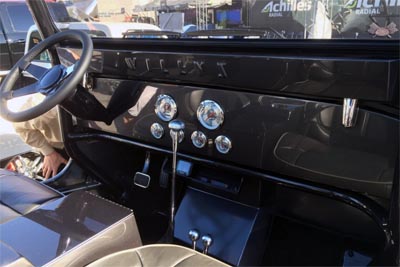 Car and Driver called it one of the "15 Hottest Classics" at SEMA 2014, and said it has "enough winch to pull itself into this century." (Ha ha.)

The dashboard is appropriately simple and classic, with a WILLYS stamping added here too. But the power bucket seats (250K JPEG) are a bit of an upgrade. 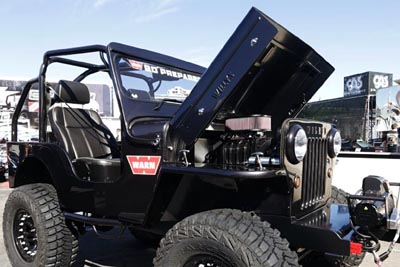 This photo is by Sandon Voelker from Automobile magazine, who called the 3B one of "Our Five Favorite Jeep Wranglers (sic) at the 2014 SEMA Show."

His assessment: "With a look this clean, a blown V-6 engine (100K JPEG), and 35-inch Goodyear Wrangler tires, we can only imagine how much fun it would be to actually get this thing dirty. That may seem like sacrilege for a Jeep Wrangler this clean, but after all it does have Warn winches front and rear. Not to mention with a shape that simple, it can't be too hard to hose mud off after playing outside. Either way, this is one great looking machine." 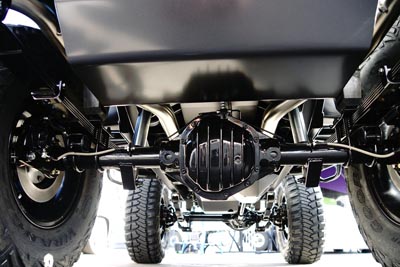 Driving Line included it in their "Favorite 4X4s From SEMA." They commented, "How do you create something that stands out at the SEMA Show? At least for the author, you build something that is functional and not just an expensive, rolling piece of art. If you can't hop in the vehicle after the show and use it for some purpose other than turning heads, it isn't very practical."

The Warn Willys also reminded me of the Debut of the ICON CJ3B at SEMA 2009. 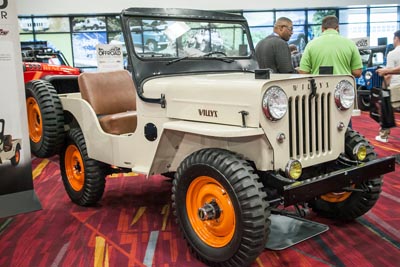 The Warn Willys was not the only CJ-3B that attracted eyeballs at SEMA. Several pristine Willys vehicles from the Omix-ADA Jeep Collection were on display, and perhaps the most-photographed one was the 1964 CJ-3B with the colorful 2A-style paint job.

Car and Driver did a feature on "The Awesome Classic Jeeps of SEMA", and said, "Talk about a cool engine name! This Willys Jeep features a taller-than-normal hood to accommodate its Hurricane (!) motor. This category 5 storm pushed out a whopping 75 horsepower."

But it is an old Jeep -- notice the carpet protector in this nice photo (300K JPEG) by Michael Simari.