CJ-3Bs in the Movies in Africa

Gorillas in the Mist and The Gods Must Be Crazy

Gorillas in the Mist 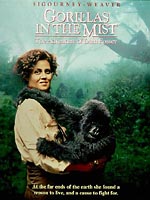 From Hal Hinson's review of Gorillas in the Mist, in the Washington Post, September 23, 1988:

"Sigourney Weaver is a towering actress, both physically and otherwise, and for about a quarter of her new film, it seems that, at last, she may have found a part cut to her scale.

"The role she plays in Gorillas in the Mist is that of the world-famous primatologist Dian Fossey, who gave up her work as a physical therapist and for 13 years -- before she was murdered in her sleep in 1985 -- devoted herself to the study of the mountain gorillas of Rwanda. And because for much of the film all we see is Fossey, alone on her mountain with, as she comes to call them, her gorillas, Weaver's more on display here than ever before. 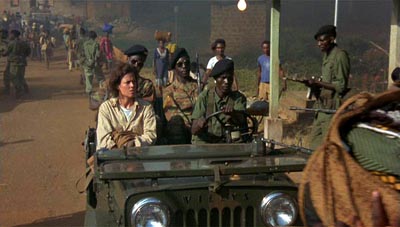 "It's a great role for her to pour herself into, and she doesn't skimp. And to the extent that the movie will allow her to be, she is magnificent in it."

The featured vehicle in the movie is a Land Rover, as one would expect in Africa. But a Willys CJ-3B makes a brief appearance early in the film, when Dian Fossey is expelled from Zaire by the army. 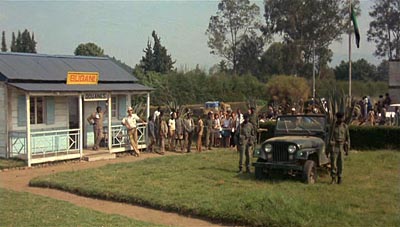 The para-military group which accuses Fossey of being a British spy, has a CJ-5. On the flagpole and painted on the front of the Jeep here, and in a closer shot (50K JPEG), is a green and black flag with a white star. It's not clear whether this is a real or fictional flag (see Flags of the World.)

The Gods Must Be Crazy

This 1980 South African film is unique (although there was a sequel made in 1989). Leonard Maltin says this "highly original, offbeat comedy...is clumsy at times, but completely disarming. It didn't receive major U. S. release until 1984, but then became the biggest foreign box-office hit in history!"

Colin Tinto's plot summary at the Internet Movie Database reads: "A bushman in the Kalahari encounters technology for the first time, in the shape of a Coke bottle dropped from a passing airplane. He takes it back to his tribe, and uses it for many tasks. The tribe start to fight over it, so he decides to return it to the Gods, where he thinks it came from. Meanwhile, we are introduced to some new characters -- a school teacher assigned to a small village, and a clumsy biologist..."

And this doesn't even mention the band of rebels who attack the government of their African country early in the film. 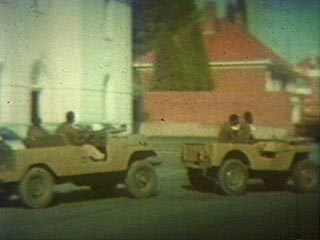 The vehicular star of The Gods Must Be Crazy is the biologist's Land-Rover, but the rebels drive a motley collection of Jeeps. Here they make their getaway after an assassination attempt, in a CJ-6 and a CJ-3A. 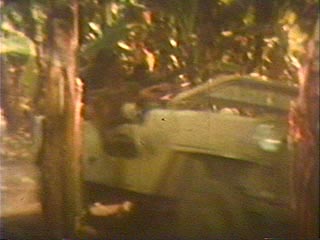 The CJ-3B is seen only briefly, in a scene where the rebels' jungle hideout is attacked by armored cars and a helicopter. Some of the rebels leap into a right-hand-drive 3B and careen off through the jungle, with the windshield bouncing on the hood. 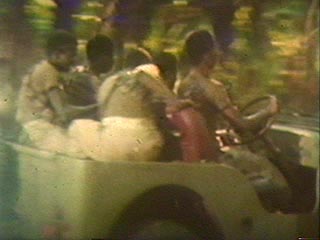 According to the IMDB, "Director Jamie Uys searched for 3 months in the Kalahari, South Africa, to find the perfect Bushman (N!xau), who in real life had no contact with modern civilization, to play the role of Xi."

I imagine casting these rebels was a lot easier. I often think of them when I see what goes on at some weekend off-roading events.

Thanks to Colin Spencer for spotting the CJ-3B in this film. -- Derek Redmond