Mitsubishi CJ-3B in the Movies 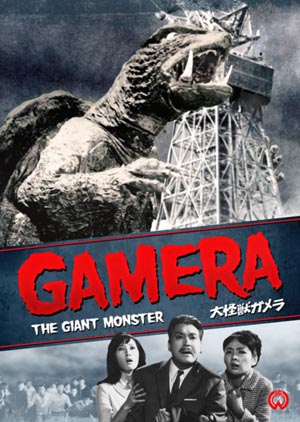 Gamera: The Giant Monster (Japanese title Daikaijû Gamera), was also released as Gammera the Invincible. The 1965 film was intended to compete with the Godzilla franchise which had been going strong for a decade.

Once it became obvious that Toho Studios had a hit series with Godzilla, other Japanese studios wanted their own monsters. Daiei came up with this giant, fire-breathing, flying turtle. Gamera comes from a time so remote in Earth's pre-history that his cell structure differs from all other living things. He gets energy from heat and eats fire to survive! This makes all modern weapons useless.

(Note: "Gamera" should not be confused with the other beloved monster "Garamon" from the 1966 Japanese TV series Ultra Q.) 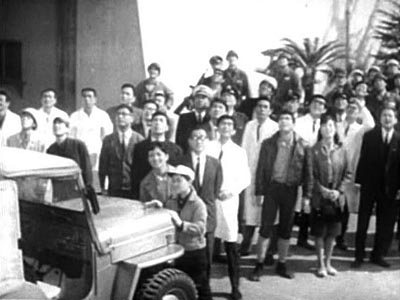 If you have to be chasing after a monster, a Jeep is a good vehicle, so there are quite a few shots of Japanese-built Mitsubishi high-hood Jeeps in the movie. 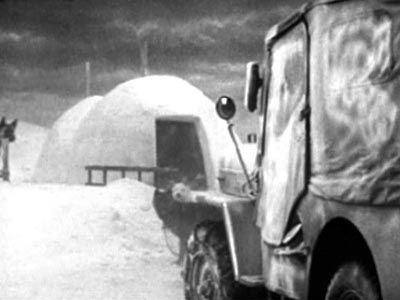 At the arctic base of a Japanese scientific expedition, a Jeep with chains is the transportation of choice.

Unfortunately a skirmish between American and Soviet jets over the arctic results in one of the Soviet bombers crashing nearby and its nuclear bomb load detonating. This causes Gamera to be melted out of the ice and wreak havoc on the world (particularly Japan). 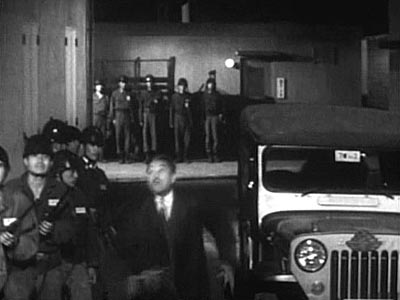 Eventually Gamera gets to Tokyo and rampages through the city. Reviewers on the Internet Movie Database generally feel that the scenes of destruction stand up to anything in a Godzilla film.

Although there are lots of soldiers in evidence, the Jeeps we see are mostly CJ3B-J3R civilian models. This one has some kind of official badge on the front. 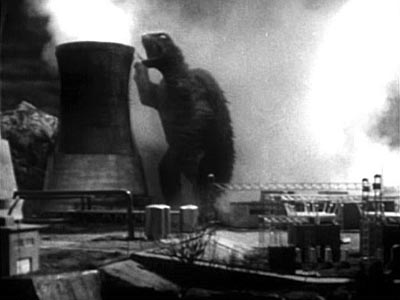 There are a couple of big battles with Gamera. A firefight at a nuclear power plant is considered the best example, as the military unloads a large amount of firepower at the monster, and there's a ton of destruction in the process as the entire place is leveled. 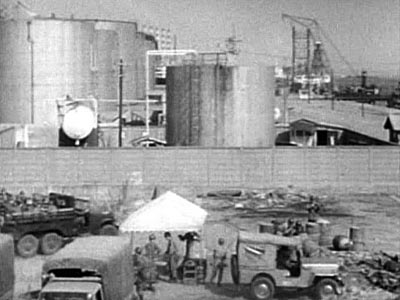 After failing in various attempts to destroy the monster, the military succeeds in a plan to trick Gamera into climbing into a huge rocket, which then blasts him into outer space. This of course provides the possibility of a sequel, and the film did spawn a somewhat successful series of sequels, in which the colossal turtle became more sympathetic, almost a superhero. 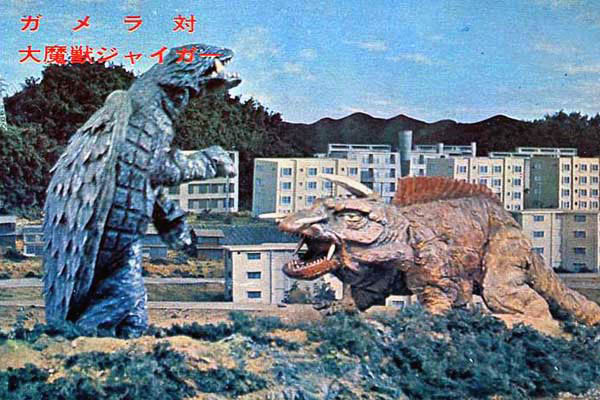 The sequels about the new Gamera who befriended children, were shot in color, but didn't have the novelty factor or the number of Jeeps seen in the first film. Perhaps the best sequel, both for cheesiness and Jeeps, was produced in 1970 and known around the world as Gamera vs. Jiger (the two monsters seen here on a lobby card, in one of their battles during the film.)

The film was released in North America by American International Pictures as Gamera vs. Monster X. 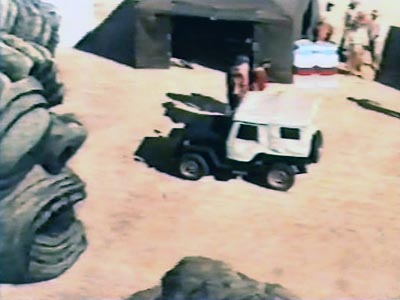 A sacred statue known as the Devil's Whistle is removed from "Wester Island" in the South Pacific (obviously based on Easter Island, not long after the world's attention was drawn there by the events of 1965.) The statue is taken for display at Expo '70 in Osaka, Japan.

The monster "Jiger" sealed below the statue is released, and heads for Japan to take revenge. There are a few shots of Mitsubishi Jeeps in the film 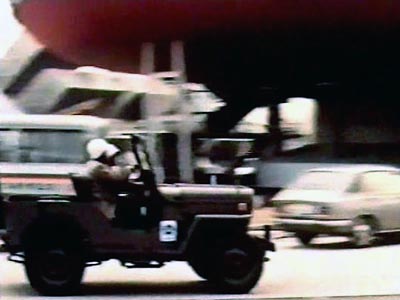 Jiger has an energy beam that can vaporize buildings instantly, so of course the military is unsuccessful in protecting Osaka. Gamera has to step in to help, and even Gamera is immobilized by a strike from the stinger on Jiger's tail. It injects a parasitic baby Jiger into Gamera, which begins to feast on the giant turtle's blood. 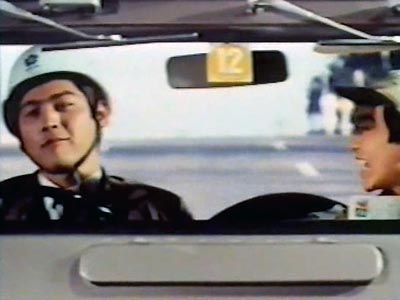 Gamera is eventually able to destroy Jiger using the Devil's Whistle as a weapon, after he is saved from the baby Jiger inside his body, by a couple of young boys in a mini-submarine who enter his bloodstream and destroy the parasite. The plot lines in the Gamera films had become so bizarre that there wasn't a lot of room for Jeeps.

No Jeeps in the 1967 production Gamera vs. Gyaos (220K JPEG poster), although there is an early Toyota Land Cruiser. And there is a good moment when Gyaos' laser beam slices a 1967 Corolla full of reporters in half, but they keep driving.

A similar gag was used in a film produced in South Korea that same year: Yongary, Monster of the Deep (150K JPEG poster).

Yongary, basically a Korean version of Godzilla, takes aim with his laser beam...

.. and bisects a Jeep, this time drivetrain and all.

This is Korea, not Japan, so the Jeep looks like an old Willys CJ-3A rather than a Mitsubishi. The little wheel added to help keep the front half rolling is visible.

These films are fun.

See more of The CJ-3B in the Movies, including some Godzilla films.