"I'm a Caterpillar mechanic by trade, thus the Caterpillar yellow paint on my CJ-3B. The Jeep was purchased new by our county road department in 1953, and used for spraying and hauling fuel. It has 51,000 miles on it. When I bought it at an auction I really had no intentions of restoring it -- I just started by fixing whatever needed repairs, and got a little carried away. I've been through the suspension, steering and brakes. I overhauled the engine, but otherwise the drive train was in good shape outside of a couple of U-joints and all new seals. I'm not a body man so I opted for a new tub. The rest of the sheet metal is original. I rewired the electrical system, but it is still a 6 volt system. I added new wheels, a roll bar and a small tool box in front of the grill for carrying my tire chains and some tools." 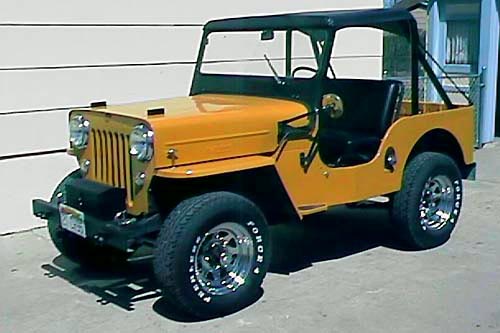 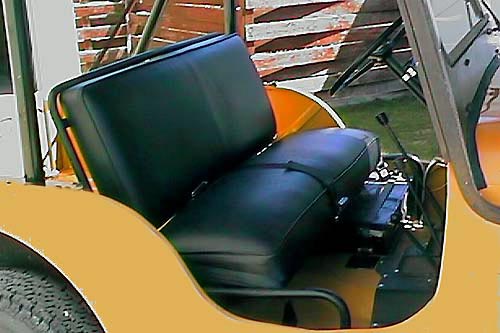 "The biggest headache I had was seats. The Jeep only had a driver's seat frame when I got it. I could not find any replacement seats, so I cut the seat frame down the middle and widened it to fit the width of the tub, cut some plywood for the cushion bottom and back, and had them covered." 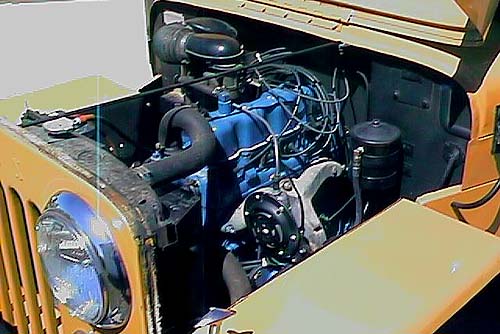 "I mounted the oil filter on the firewall and not on the side of the engine, because the original bracket was broken. I really wasn't concerned with getting everything completely original, as much as getting it to suit me. The only other plan I have is to install a Lock Right in the rear differential. Although I don't have a lot of places to go four-wheeling, I go whenever I can."

See also a photo of the dash and interior (30K JPEG), and a view of the passenger side (30K JPEG).

Thanks to Brian for the photos and information on his Jeep. -- Derek Redmond

Last updated 7 May 1999 by Derek Redmond redmond@cj3b.info
https://cj3b.info/Owners/Greif.html
All content not credited and previously copyright, is copyright Derek Redmond