Growing Up in a Jeep Family 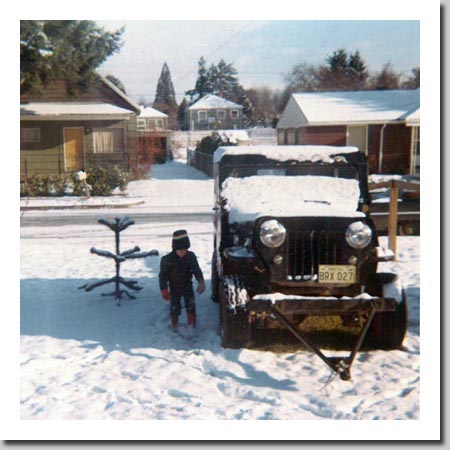 My introduction to the Jeep CJ-3B was at a very early age. My parents didn't get involved in Woodstock, or the Flower Power phase, or even the sex, drugs and rock and roll craze that was sweeping the country back in the early 70s. Instead, Mom and Dad got involved in Jeeping, in the Tacoma, Washington area. 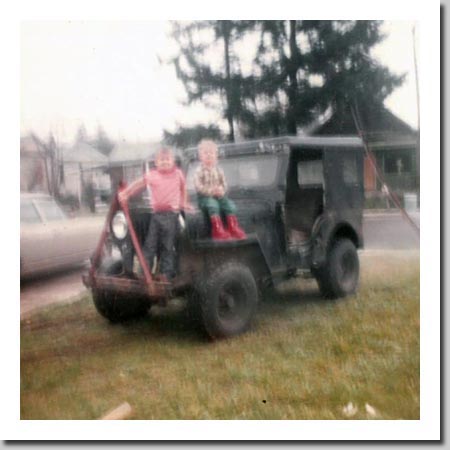 The nearest we can figure out is that my parents bought our 1964 CJ3B in late 1969 or early 1970. The earliest childhood memories I have are with my parents in that Jeep -- it was just part of the family. 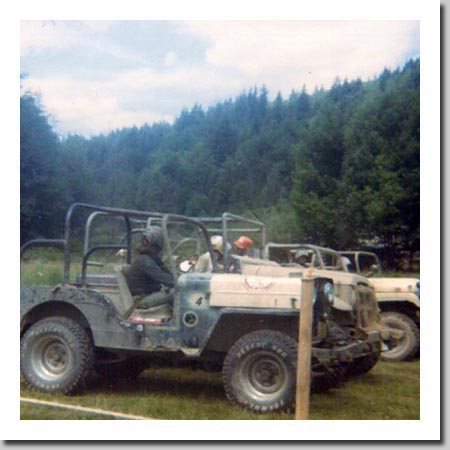 I have memories of campouts we went on with other Jeepers, the play days, the trail runs, racing through the obstacle courses and mud pits. 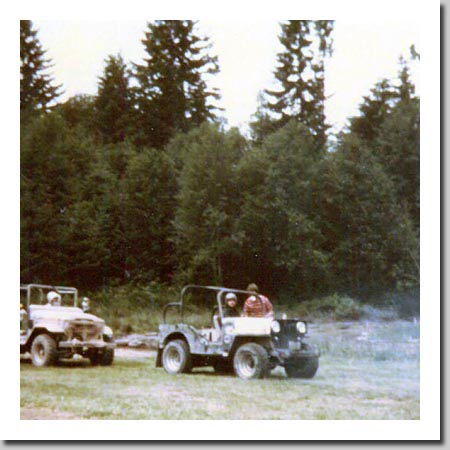 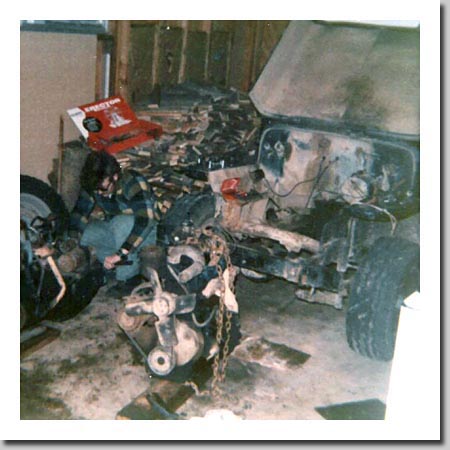 I remember either working on it with my Dad (as much as a small child could)... 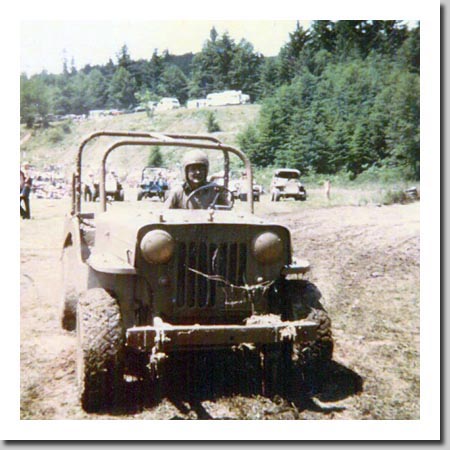 ...or cheering him on as he raced the others through the mud course. 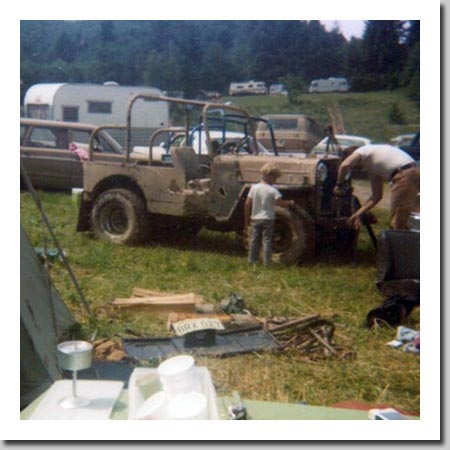 As a small child it was the best time of my life. Playing with Jeeps in the mud with others -- what more could a kid ask for growing up? 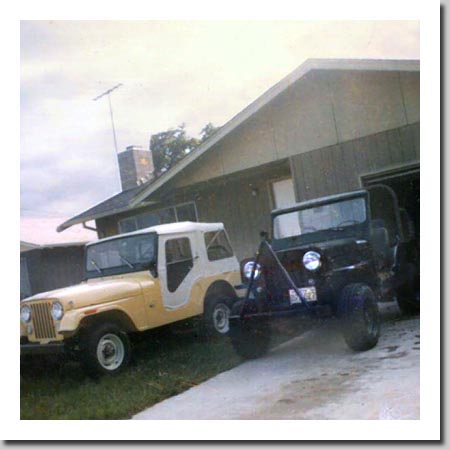 Fast forward to June 1972. My Dad brought home a brand new yellow 1972 CJ-5 without telling anybody. He traded the ole CJ-3B in on this yellow thing and I remember the day pretty clear. My Mom was so pissed and my older brother and I started crying because he got rid of our Jeep for this yellow thing.

I don't know what the adult conversation part of it was, but Dad must have realized the error of his ways, and a few days later our old Jeep showed back up and life was good in the household again. (Dad took a picture of the CJ-3B and CJ-5 side by side before he returned it.) 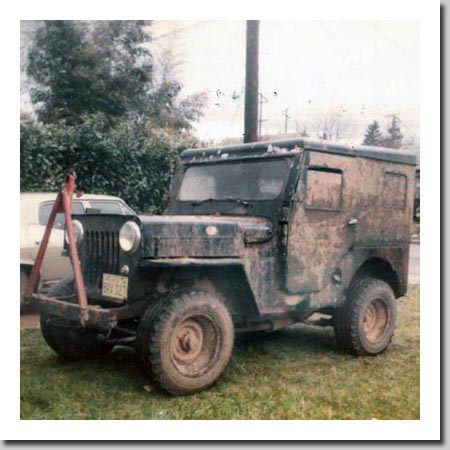 Sadly, by 1978-79ish life dealt Mom and Dad a different hand of cards and we didn't get to use the ole Jeep anymore. Some will remember the stagflation of the 1970s and Reagan-omics of the 1980s. By 1980-81ish Dad had to sell the Jeep because they needed the money to make ends meet.

It was a very sad day when a guy showed up with a trailer and loaded our family Jeep up and drove off. We never saw it again and for many years I had wondered what happened to it. Actually, I was pretty sure it had been turned into a Honda or two. 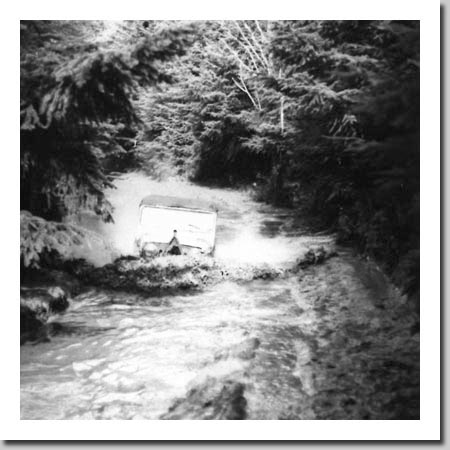 On the funnier side, for my Dad's funeral my Mom asked me to write something for the Pastor to read. After I asked a friend to proofread it he started laughing at what I wrote. I asked what was so funny and he said it sounds like it's a eulogy for the Jeep.

It was just so funny, being a kid, so impressionable at that age, I couldn't imagine the Jeep without Dad or the other way around. The two go hand in hand -- they were both a very important part of my childhood and I don't have memories of one without the other. We had a few more Jeeps over the years, but none of them are stuck in my memory like the ole CJ-3B. 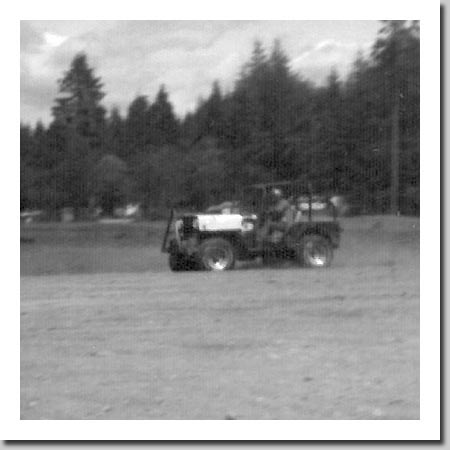 After Dad's passing, and reflecting back on life, I started hearing a nagging voice in the back of my mind telling me to go look for our old Jeep. Fully knowing the odds of finding it still around were slim to none, I contacted two different departments within the DMV to ask for help. A few weeks turned into months and the results were the same. They responded to me with, "They purge the system after six years," and to try a Private Investigator.

With nothing to lose, I contacted a Private Investigator who verified the story of the DMV and agreed the odds of finding it still around were slim to none, having been sold almost 40 years ago. He took down my information for the Jeep and said he would contact me if he found something.

Fast forward a few more weeks, and one Sunday afternoon the PI called me and gave me the name and address of the last known registered owner from 20 years ago. There was nothing else listed after that. We figured the Jeep was recycled and that's why there was nothing after that.

Long story short, many more weeks later I finally found and made contact with the son of the guy who bought our old Jeep from my Dad, and they still have it. They are no longer in the state, but I have exchanged e-mails with him several times and learned some pretty cool things about them. From what I can tell his Dad was a huge influence on them, too. They were also a Jeeping family and they have many great memories with that ole CJ-3B as well. Our Jeep went to a very deserving guy who used it for the last 40 years for adventures of his own with his family, up until his passing a few years ago.

I expressed my interest in buying the Jeep back if they ever decided they want to sell it. So, for now, it was a waiting game and this is where the reunion story paused. 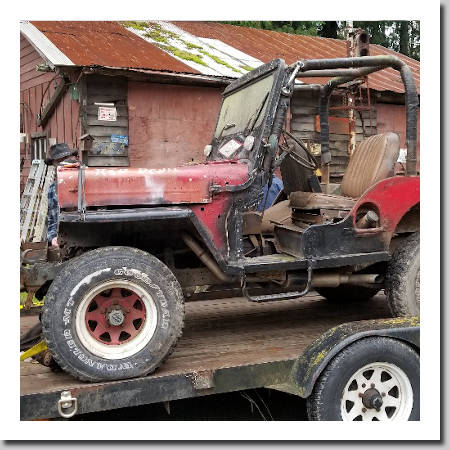 I got the call on Friday, November 26, 2021 that the owner's son was back in town. I met up with him on Sunday morning with a car trailer in tow.

We spent several hours talking about things on the Jeep and all the different places it had been to including all the trails they made with it around their property. The original body is long gone and a modified MB body is sitting on the frame in its place. It currently has a Buick V6 and a GM Turbo 350 transmission in it. With a fresh battery and some fuel dripped into the carb, it started right up. He made one lap around the yard with it and drove it up onto the car trailer. He was sad to see it go but mentioned his Dad would approve of what the family decided to do with it.

With closer inspection of it, I didn't recognize the VIN tag at first glance (it was trimmed and turned sideways) but the VIN numbers (100K JPEG) match the information I have from so many years ago, and I can see the matching last five VIN numbers stamped in the frame below the battery box, verifying this was our old family CJ-3B.

There are no words to express the appreciation I have to the family. I am very grateful and feel so blessed to have such a gift returned to our family after so many years have passed. I'm going to leave the Jeep as is for now until my shop gets built next year. It will be the first project into the shop for a full teardown and restomod. The plans for it are to make it look like a CJ-3B again with a touch of the 1970's look on the outside that I remember, and a newer drivetrain.

It's pretty surreal to think that after so many years have passed the ole family Jeep is home again! -- Marty

Thanks to Marty Hicks for the story and photos. Watch for the rest of the story after he gets the 3B into the shop. -- Derek Redmond