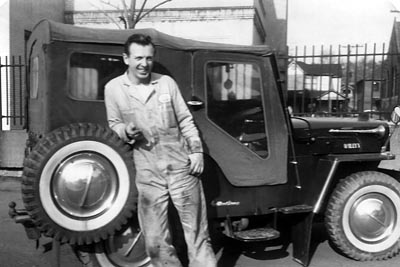 This 1953 CJ-3B has been in my wife's family since it was purchased new by her great uncle Bill Hoffman, back in 1953. Uncle Bill worked in a dealership outside of Pittsburgh, and the Jeep was his everyday transportation and an off-road toy on the weekends. 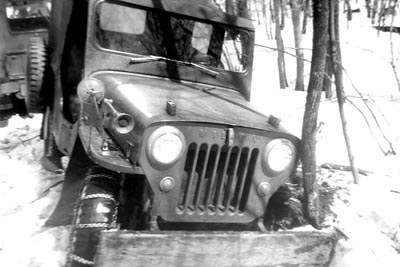 Bill and several others from the Triangle Jeepers club in Pittsburgh played hard and enjoyed the Jeep in the mud, woods and snow. This was obvious based on pictures (this one was taken in March 1963), stories from family members, and the work that was needed to bring it back to the current condition it's in today. But it's a Jeep, that's what they were built to do! The Jeep was garaged sometime in the mid-70's, where it sat for more than 30 years. 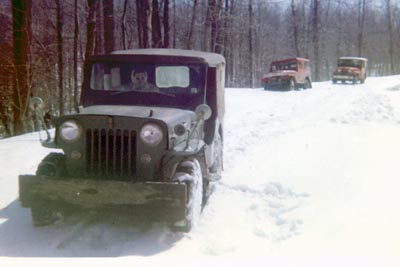 The story behind the air horns is that they were originally installed by Uncle Bill. He was a kid at heart to say the least, and he was always ready to share a joke and loved "toys" which included things like hand buzzers, whoopee cushions and anything he could find at the "novelty shop" to get a laugh. His joking personality carried over to the Jeep and included the installation of bells (operated with a foot switch), the air horns mounted to the hood, an intake manifold "wolf" whistle, and several electric horns.

As my father-in-law Walter Daw describes, all the kids knew when Bill was coming down the road by the bells, whistles and horns announcing his arrival, and they all wanted to go for a ride and hit the horn buttons. 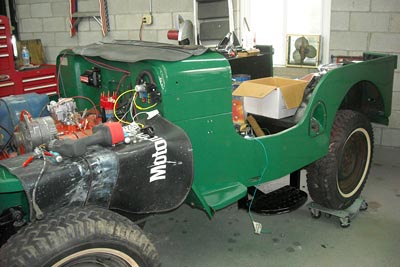 The Jeep has now been restored. The original body was patched, welded, sanded, patched some more and sanded, sanded, sanded, sanded (180K JPEG) then finally painted. All restoration work, start to finish, was done by the Kiss family and my wife Donna's father, Walter. As we started the disassembly phase of the project we discovered at least a dozen electric horns mounted to the frame, firewall, inner fenders -- any place they could be mounted out of sight. 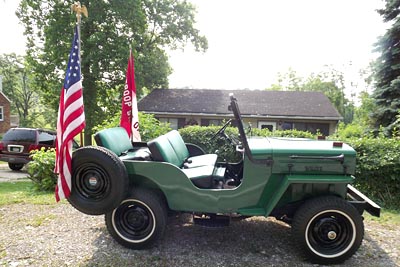 We decided to cosmetically restore and re-install the air horns to keep a little piece of Uncle Bill in the Jeep. Although they are non functional, we did install a new set of air horns under the hood, along with re-installing the original wolf whistle, which we use a manual choke cable on the dash to operate. We continue to make a lot of noise driving through town and announcing our arrival with horns and whistles, and know Bill would be happy that he's still making us laugh as we catch someone off guard with a pull of the wolf whistle and blast of the air horns. 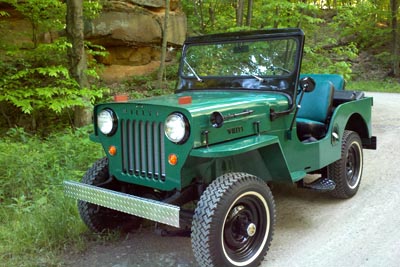 The Jeep will remain in the family as long as parts are available online. With two young kids learning and being involved with every step of the project and normal life getting in the way, it took about five years to complete. It's a great Jeep with a lot of family history prior to us restoring it, and since this was a family project we added another chapter that we intend to continue for many more generations. The Jeep is ready to play again, just not anywhere near as hard this time. 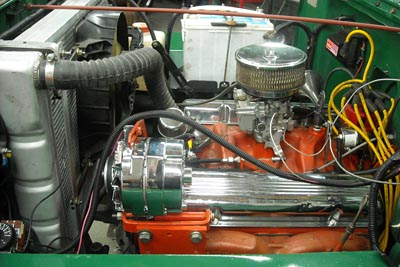 The original engine is long gone -- it's currently running a small block Chevy 283; all other drivetrain is original. The 283 SBC was originally installed by Uncle Bill in the early 70's. I understand he made several motor changes through the years and this was the last motor installed before it was parked in the mid 70's. During the restoration we pulled the motor, did a rebuild, painted, added some chrome and reinstalled it. 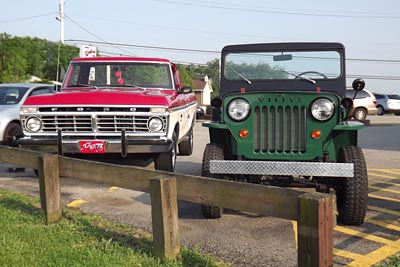 Special thanks and credit to Uncle Bill, who originally purchased the Jeep and started it all. Also Walter Daw, my father in-law (whose '73 Ford is in this photo) for providing the needed guidance, knowledge, and kick in the butt when necessary, while always being willing to get his hands dirty. And my wife Donna and kids Samantha and Jim, for helping with anything and everything to get Uncle Bill's Jeep on the road again.

Sam and Jim, great lessons and friendships can be built in the garage, working towards a common goal!

Thanks to Greg for the story and photos. -- Derek Redmond