Robert is a relatively young guy, an Army vet and a first responder in Michigan. But he also has a lot of experience in vehicle restoration, and it shows in this project, his first time tackling a CJ-3B. I'm going to let Robert tell you himself about the Jeep's background and what he did with it. -- Derek Redmond 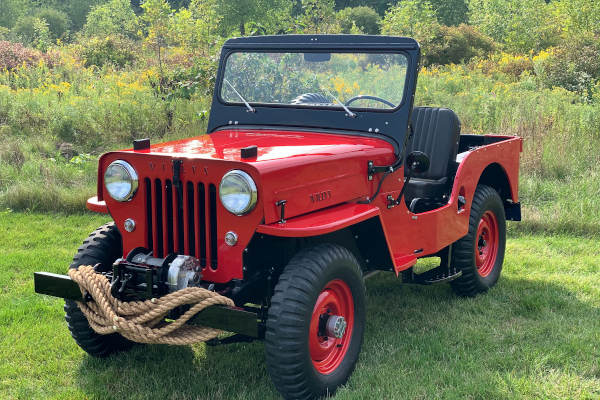 This CJ spent its working life in Texas on a farm, from what I have gathered from a previous owner. Somewhere around 2000 a gentleman in Arkansas purchased the Jeep and did a mild restoration on it, with new paint. From there the Jeep went to Georgia and spent a few years there.

The owner I purchased it from here in Michigan brought the Jeep north in the spring of 2019. He explained to me that he saw the Jeep at the Willys Roundup, fell in love with it and made an offer which was accepted. 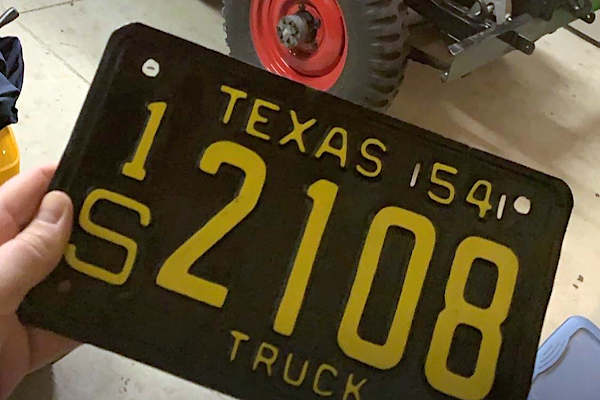 I have the original Texas plate, but I'm unsure how long the Jeep was in use there, and when it was put away.

The new owner in Michigan enjoyed it for about a year, but by then the Jeep was falling apart and parts needed to be replaced. He realized it was just too much to take on at the time so he listed it for sale. I purchased it in April 2020 and went full steam ahead on her! Tore her down and rebuilt all her components. She was in rough shape and not running well, but after five months of long days, she finally drove her first 100 miles in September and she was proud to do so! 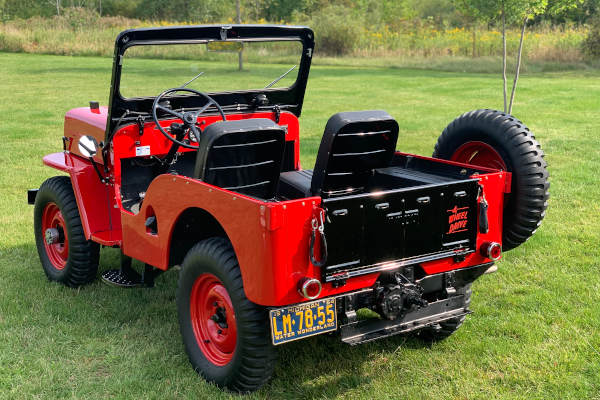 Any part that was rusted was sandblasted and either powder coated or painted. The red paint (enamel) on the vehicle is from the original restoration years ago, but I wet sanded and rubbed out the paint to almost new condition.

I painted the windshield frame and tailgate to black, and I have to give a shout out to my good friend Rob Kalski who really helped getting it done by painting some of the parts. 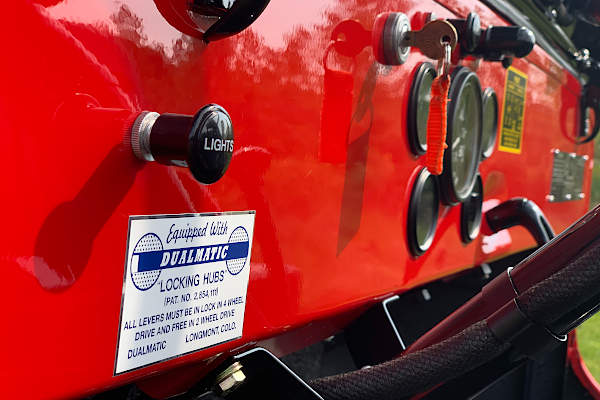 The kingpins were smoked along with the entire steering system (improper lube in knuckles and steering box.) All bearings were shot in the axles and one Bendix axle joint was disassembled in the knuckle on the driver side. I tried to maintain any NOS parts I could on the build. Axles, brakes, suspension, steering, you name it -- it was rebuilt to new condition.

The Dualmatic locking front hubs were not operational upon purchase and I restored them back to operation as well. 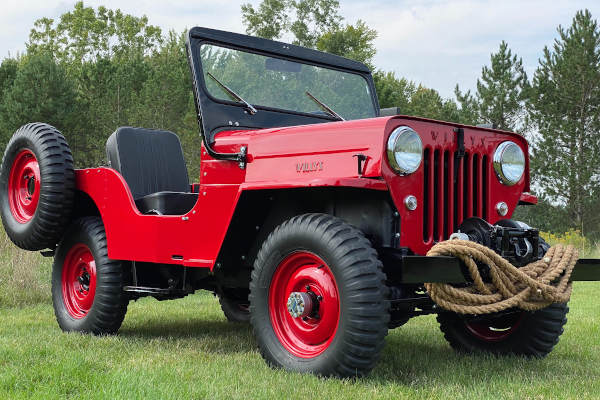 Hands down this was the most fun I've had on a build, and I learned a lot along the way! I owe a lot of the problem solving on some frustrating issues to the people and posts at CJ3B.info.

As of now she will enjoy her life driving the back roads, and attend car shows for future generations to see. I think it's important to keep these on the road and maybe spark a future gearhead to restore one. I have never been more proud of something I restored, and a CJ-3B has been my dream Jeep since I was a little kid. Thirty-two years later I made it happen and she's a dream come true! 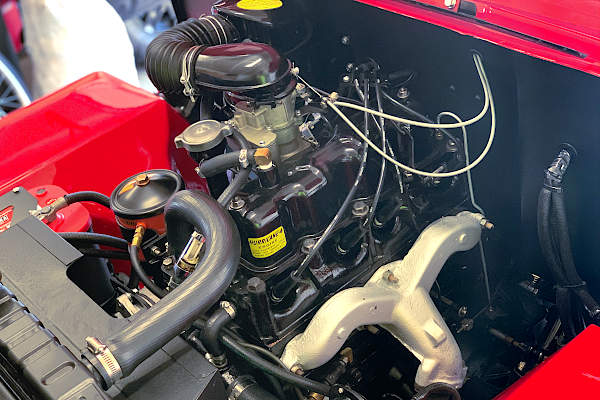 From what I know the motor is not original to this Jeep and looks to come out of an M38A1, engine # MD74682. I actually started the project with the motor. I rebuilt the entire top end and replaced all lines, etc. to try to bring back the factory look and operation of each item.

She smoked a bit but she was alive and wanted to keep enjoying life! Turns out the smoke was just some burnt valves not seating right. The carburetor was completely remanufactured and restored to original operation. 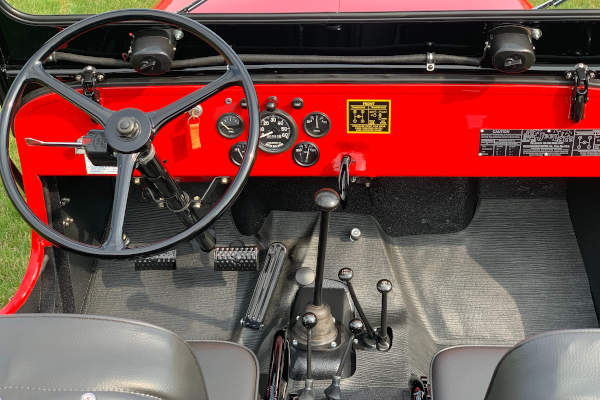 Everything came out of the Jeep and was gone through. It was a nightmare from previous owner neglect, but every square inch of this Jeep was gone over and anything that was unsafe or needed attention was fixed or replaced.

The interior had the wrong seats and I located a correct set. 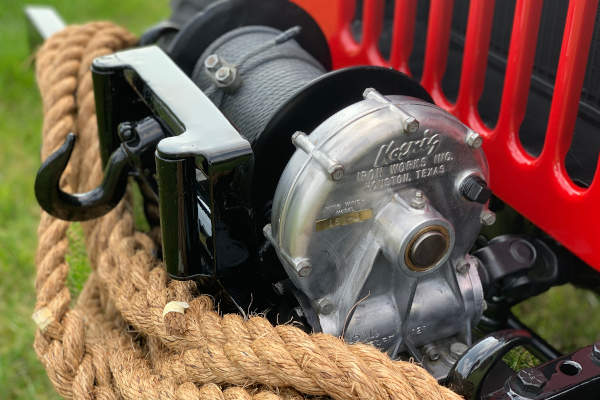 The Koenig 151 front PTO winch is operational, along with the rear implement drive, both running from a Koenig 50 PTO dual stick power take-off. 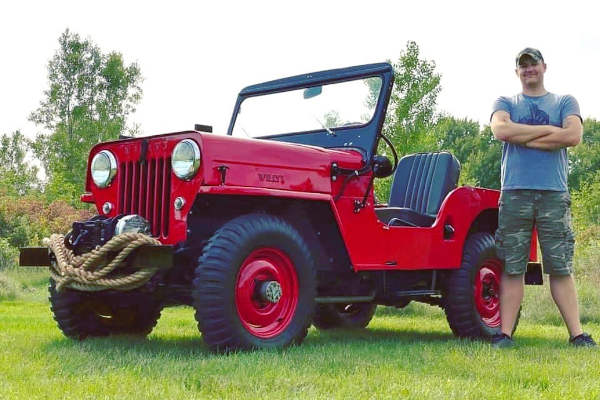 I grew up building cars and started working at a restoration shop when I was only 15 years old. I had the privilege to serve in the U.S. Army with the 9th Infantry Manchus, including a tour to Iraq, and I now continue to serve this country as a Public Safety Officer doing the jobs of police/firefighter/EMT all in one.

I spend my spare time working on Jeeps and now I'm full steam ahead on an '86 CJ-7 since the CJ-3B is done! She is a work of art as is every CJ-3B is on this website, and I'm glad to have a piece of history for years to come. -- Robert Kwiecinski


Thanks to Robert for the photos and information, and doing such a great job on the restoration. -- Derek Redmond