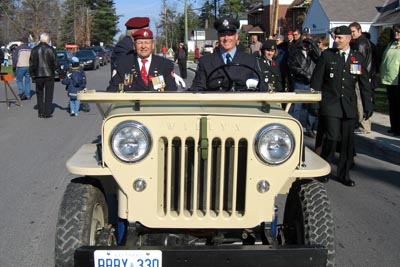 November, 2007: Well, its been almost three years and she now runs and sounds great. I am hurrying to get her finished as my wife's grandfather was a Canadian paratrooper and fought in the Korean war. He spent a great deal of time in a Willys -- he spent 15 months over there. He would like me to drive him in the Remembrance Parade on November 11 and he would like me to wear my fire uniform as he will be in his. I have to bleed the brakes and get the steering aligned and tie up some last minute wiring. But I think we can do it. 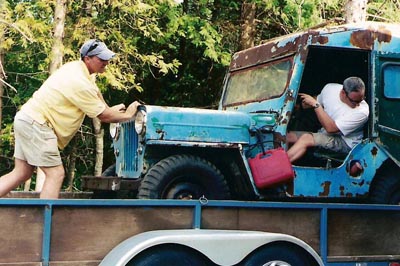 I am a longtime fan of the early Jeeps and finally picked up a 1959 CJ-3B ina little place called Denbigh, Ontario. The 4WD works and I drove it around for a bit when I first looked at it. The restoration was initially going to be a quick fix and ride repair. But as I got into the tearing down phase, I started to really find it interesting and rewarding to refurbish the Jeep as well and original as possible -- as well as adding some personal touches like in the color scheme. CJ3B.info also helped a lot in adding the confidence necessary to do more.

I soaked every nut and bolt with Liquid Wrench, etc. for months prior to putting a wrench to anything. If I went into the garage to get something, I would spray the whole thing and then let it sit. This really paid off, as some nuts came off with light hand wrench work. I never used any heat! 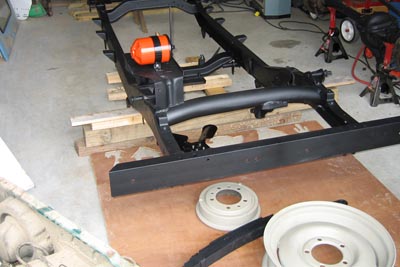 I welded the frame in the usual cracked locations featured in the Tech Tips section. I also replaced the front bumper as it looked like it hit some stumps over the years. The bumper is now made from C-channel and is quite a bit heavier (in case I hit a stump or two.)

My rims I had blasted at a manhole cover foundry in Renfrew, Ontario. If you look at the manhole covers in your town or city, they will likely say Himbleau, Renfrew, Ont. They have a large steel shot blasting tank which took my rims from nasty to very clean in 20 minutes or so, and cost me $15.00 CDN each. The shop itself inside and out looks like something from a Charles Dickens novel. Very industrial revolution like... 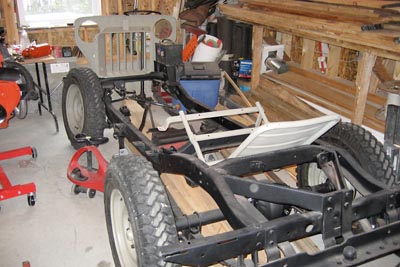 I have a set of lightly used Iltis tires on the rims. These were supplied by a local tire guy who had them from a recent job. It saved me some cash and I think they suit. They also have a good aggressive tread. $400.00 CDN for five tires.

I have rebuilt the rear axle (120K JPEG) with all new seals and bearings and am working on the front axle (100K JPEG) now. The original or recent(?) "knuckle pudding" found inside actually seemed to do a good job as the bearings inside seemed pretty pristine considering the overall outside appearance of the Jeep. 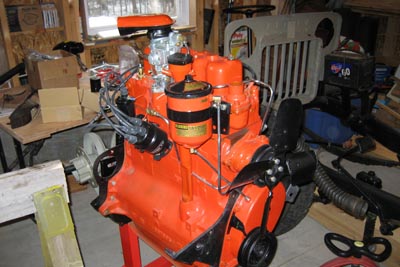 The engine was completely torn down, hot tanked and rebuilt with the following parts ordered from a host of on-line parts supply shops: new manifold (120K JPEG), Solex carb, new rings, bearings, oil pump, fuel pump and gasket kits. I had this work done for me, as this is my first vehicle restoration. I have a high school buddy who works on the side for a auto resto shop and they were slow over the last winter and I told them there was no hurry for the work to be done. It was there for over a year, but they did a great job. 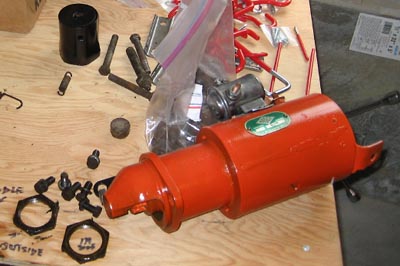 I work at a fire station in Ottawa and have the good fortune to have a Captain and a Lieutenant who are former mechanics. These two often lend info and help with some questions. They also allow me to bring my portable cabinet blaster into the truck bay and hook it up to our massive air system. We have personal time allotments during each shift as we do not get normal breaks and lunches, so I fill my time with wire brushing, blasting and painting parts. It's great to put things back together clean and smooth. I have been replacing all the fasteners with stainless as well. 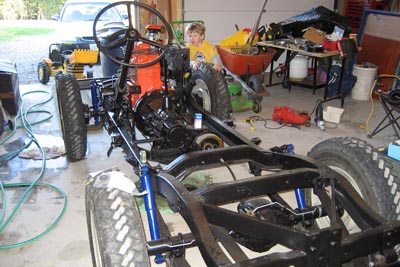 The frame has been sand blasted and painted. I did not add a lot of extra expense to powder coat or anything like that, as I have read different views on whether future work on the frame is workable with heavy treatments on the frame. I may want to add a winch plate or make other repairs if they become necessary. 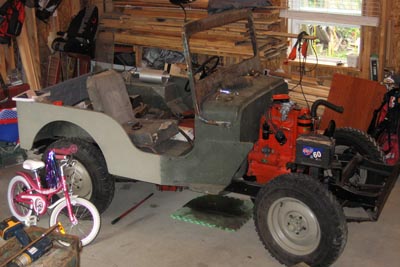 I got my tub from a fellow who had a tub kit sitting in his barn for a couple of years and never got around to using it. It cost me $1500 CDN and I also got a new Tiger Top and Painless wiring set for another $500.00 -- not a bad deal! No matter what the guys say about the repro tubs!

See the grille in primer (90K JPEG). As for a finish color, I decided to go with a rather dull desert sand as I'm not an overly flash kinda guy. 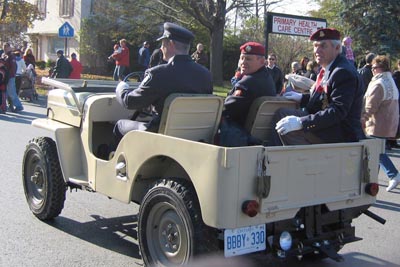 CJ3B.info and the contributors on the Bulletin Board have been a huge help. To have the resources of the internet to bring all of this together is really remarkable. I would not have been able to do this project otherwise. -- Pat


At Christmas 2007, Pat McIntyre got the whole family (70K JPEG) into the Jeep for a Christmas photo. And the kids were eager to go on a moonlight drive (100K JPEG) in the first snow of the winter in Ontario.

Thanks to Pat for the story and photos. -- Derek Redmond