Jeep Touring in the Alps 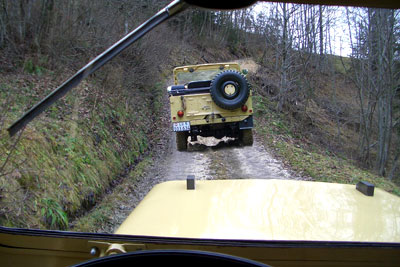 Most of the CJ-3Bs in Switzerland are former Swiss Army Jeeps that have been released as surplus over the past couple of decades, so there are plenty of Jeeps on the road in the original olive drab or grey. Johannes Tanner decided to be a bit different, and repaint in a brighter original Willys color.

Johannes has also taken lots of nice photos on his trips through the Alps. On the right is a composite picture I made from two of Johannes' photos; looking out the windshield of his 3B to also see his Jeep a few meters ahead on one of the many winding mountain roads he and his partner Denise enjoy exploring. -- Derek Redmond 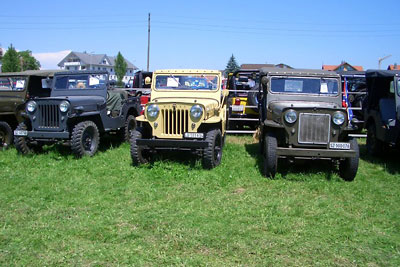 I live in Emmenbrücke, a town near Luzern (Lucerne) in central Switzerland. My 1961 Willys CJ-3B, serial number is 57348 70740, is equipped with a 6-volt electrical system. The vehicle was in the Swiss military service from 1961 to 1985, in use with a radio communication system (Signal Jeep). The body is in very good condition. I changed the color from the military dark grey to Arena Yellow, which was an original Willys paint color. 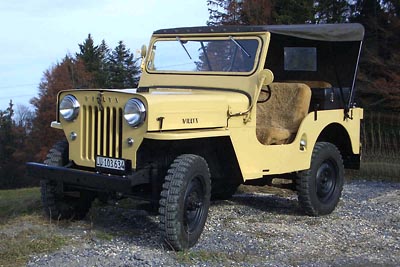 I bought the CJ-3B in 2001. The vehicle was in very bad condition. In the previous 16 years it was driven only 2000 kilometres. Many leaks in the transmission and engine had to be repaired. The electrical equipment I had to rebuild completely, and I have replaced a few other items. See photos of the engine left side and the engine right side (100K JPEGs). 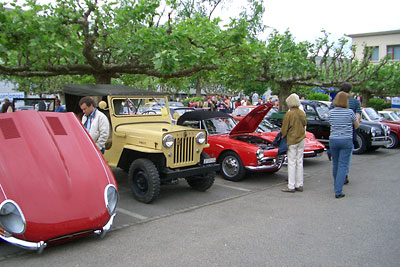 I have taken the Jeep to the big annual oldtimer meet in Sarnen (200K JPEG). To keep an oldtimer in Switzerland is easy; we have the possibility to use our licence plate on two different vehicles. On the vehicles we have a special snapping mechanism to move the plate between the two cars. The plate is the tax and insurance proof and is related to the owner and not to the vehicle. Also the periodic car test interval is six years with an oldtimer instead of two years. 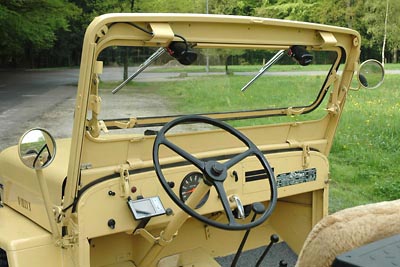 The Willys is now in real good condition and I do a lot of travelling in and around Switzerland. In the Swiss mountains GPS navigation (100K JPEG) is a valuable assistance to find small roads. I mark a point somewhere in the area with the setting "shortest way" and I find very interesting and very small roads, absolutely right for the Willys.

The windshield wipers are now electric. To feed theGPS equipment I installed a 6-volt to 12-volt transformer. 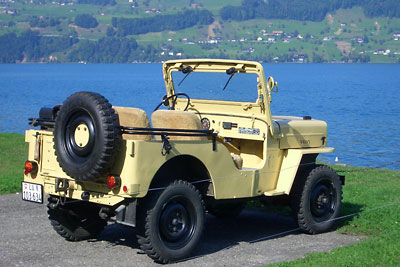 Mainly Denise and I make one-day trips. Once in the summertime we go on a longer tour. This year I travelled through the northern part of France. Sometimes on a beautiful Sunday we make a round trip, as an example around Lake Lucerne. 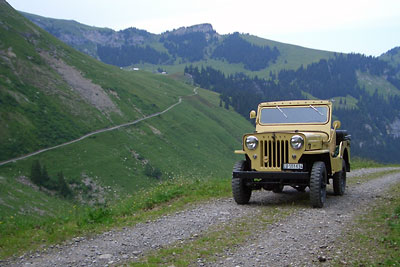 The Alps where we often drive around are south ofLucerne. The highest point of the Alps is 4634 meters above sea-level. See also a photo from inside the Jeep overlooking the lake (200K JPEG). 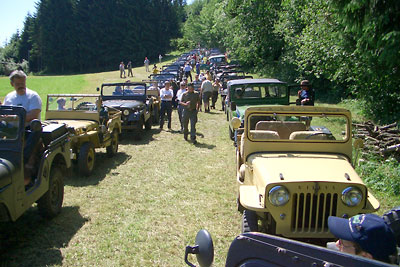 Our Jeep Club of Central Switzerland is a club with more than one hundred Jeeps. Mainly vehicles from the Swiss Army, but also civilian Jeeps. All models are represented; MA, MB, MC, MD, CJ, FC, Jeepster, Station Wagon. Once in the month we meet for an exchange of experience or a drive in our beautiful central Switzerland. Sometimes in the summer we meet for a longer tour.

See the "Friends of US Army Jeep Oldies" Jeep club badge (100K JPEG) on the grille of the CJ-3B. 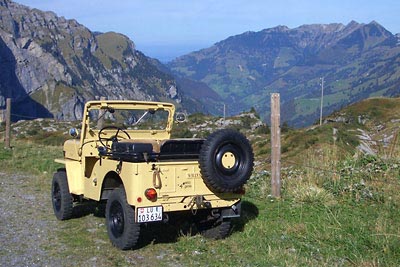 I was born and grew up in the Usambara Mountains in Tanzania (East Africa). When I was born, I was driven home from the hospital in a Willys CJ-2A -- a one-hour trip for only ten miles. And afterward I grew up with three Willys (100K JPEG) around me. 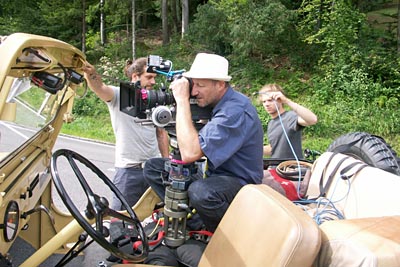 During the 2009 shooting of a movie in Switzerland about historical racing cyclist Hugo Koblet, the camera was mounted in my CJ-3B. It was also used as the escort vehicle to the racing cyclists. Notice the 'dirty' tires on the Willys, made by normal hairspray to make the Jeep look older and show the long duration of the bicycle race. 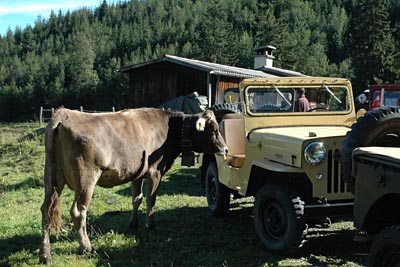 In our Alps the cows are completely free. They feel free and they have the chance to inspect all foreign visitors! See also another 2012 shot of the cows (220K JPEG). 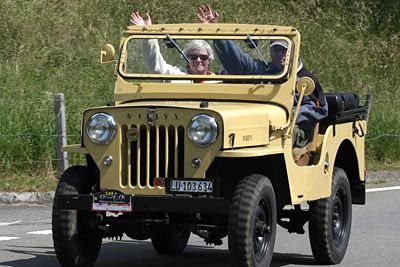 Kind regards from Switzerland and I wish you a nice summer, with a lot of Jeep weather. -- Johannes Tanner

Thanks to Johannes for the great photos, including Johannes and Denise waving to us from the Jeep in 2010. -- Derek Redmond