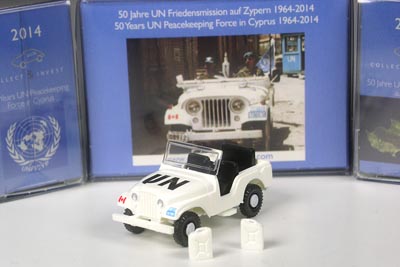 Wiking Models in Germany has produced a limited edition of its HO-scale (1:87) CJ-5, decorated as a Canadian Army M38A1 CDN serving with UN Forces in Cyprus. It recognizes this year 2014 as the 50th anniversary of the UNFICYP peacekeeping mission, and was produced in an edition of only 519. The photo for the display packaging was supplied by CJ3B.info. 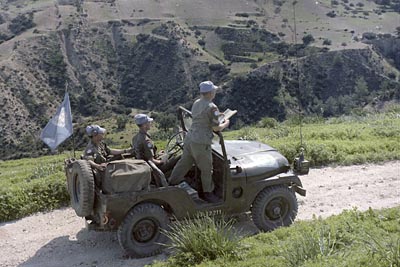 The United Nations began peacekeeping patrols in Cyprus in 1964, to prevent conflict between the Turkish and Greek Cypriot populations on the island. UNFICYP included a significant Canadian Army contingent for the first three decades. During the first ten years, their Jeeps were the standard olive drab, with blue UN markings added.

Seen here is a radio-equipped patrol in Cyprus circa 1964, identified by their insignia as the Canadian Guards infantry regiment. Photo by Canada Department of National Defence, from Library and Archives Canada. 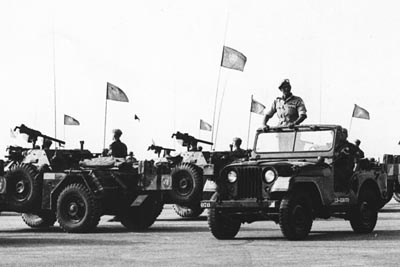 An officer in an M38A1 CDN reviews a squadron of Ferret armored scout cars, at UNFICYP Headquarters in Nicosia, Cyprus on 2 August 1966. Photo courtesy Colin Stevens. 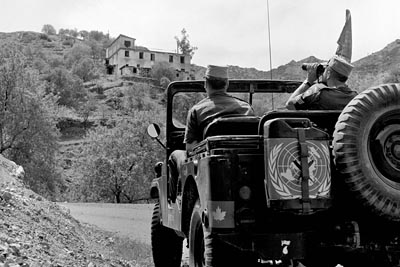 Over 1,000 of the original Willys Model MD (M38A1) Jeeps were built by Ford in Canada in 1953 for delivery to the Canadian military, and designated M38A1 CDN.

This photo by W. O. Kemp is courtesy of UN News & Media. 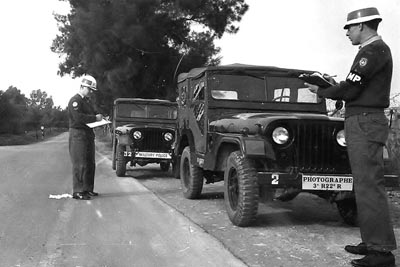 Almost every Canadian infantry battalion did at least one Cyprus tour, as well as some armored and artillery units, so in some cases it is difficult to identify the exact unit in a particular photo. In this case it's clear that the MP's are posing for a photographer attached to the Royal 22nd Regiment. This is circa 1968 on the Nicosia Airport Road, and the Jeep looks too new to have been in service for 15 years, so is probably a new M38A1 CDN2. 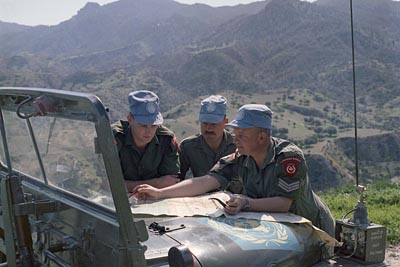 This Canada DND photo shows a patrol looking at a map, apparently near the eastern end of the Kyrenian Mountains in northern Cyprus, the Turkish sector. Again the shoulder insignia indicates the photo from Library and Archives Canada shows members of the Canadian Guards. The Cdn. Guards Association identifies them (R to L) as as Sgt. Gerry Osborn, Cpl. Eric Sheller and Gdsm. Manley John Odaisky. 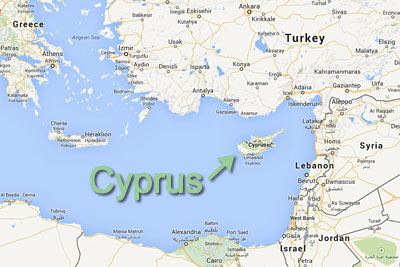 Speaking of maps: the island of Cyprus, about 150 miles (240km) long, sits in a strategic position in the eastern Mediterranean Sea.

A Google map of Cyprus shows the UN buffer zone established in 1974 which still extends across the island. 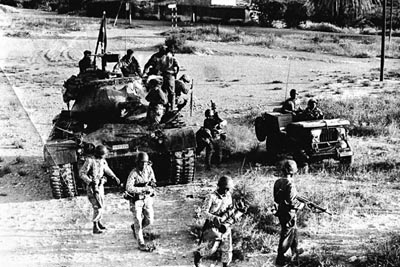 In 1974 the Turkish Army (left) invaded the island and captured a large amount of territory previously held by Greek Cypriots. The Turkish invasion brought tanks and large numbers of olive drab CJ-3B Jeeps (see Turkish Invasion of Cyprus on CJ3B.info.)

One of their objectives was the Nicosia Airport, which the Turkish Air Force had already attacked. This changed the whole nature of the UNIFCYP mission. 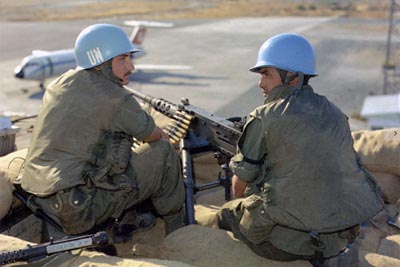 UNFICYP had designated the airport as a UN-protected zone, and elements of the Canadian Airborne Regiment prepared to defend it. Elsewhere on the web, Canadian Peacekeepers in Cyprus recounts the defense of the area, which resulted in two peacekeepers killed and over 30 wounded. 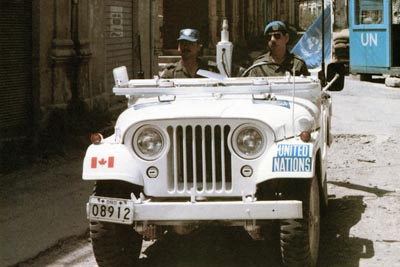 Olive drab Turkish Jeeps swarming the north side of the island meant that the Canadian Jeeps needed to be more clearly identified, and they were painted white, as they had been in some other UN peacekeeping operations. This photo (exact date and photographer unknown) is courtesy of Jarek Skonieczny.

The Canadian War Museum in Ottawa has a UN peacekeeping diorama (140K JPEG) which resembles this scene. 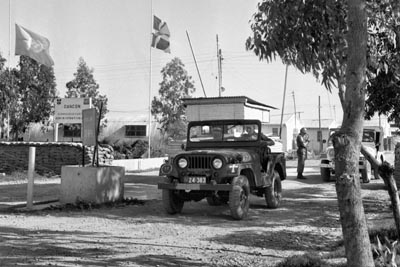 Other UNIFCYP contingents were already doing the same thing. This Danish Defence photo courtesy of Leif Hellström shows two M38A1s at the Danish headquarters on Cyprus, one in white and one still in olive drab, circa 1964-65. Leif says, "Most (but by no means all) UNFICYP vehicles were white from 1964." 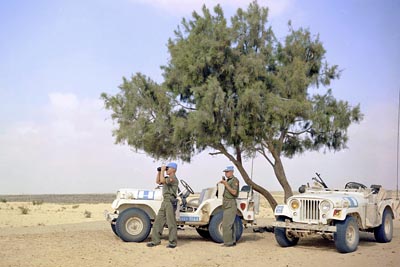 The M38A1 CDN Jeeps seen here were serving with the earlier United Nations Emergency Force in the Sinai (1956-67), a few hundred miles due south of Cyprus. (Photo from Library and Archives Canada.) They are identified by UN Multimedia as belonging to the Royal Canadian Dragoons Reconnaissance Squadron on patrol along the Egypt/Israel frontier on 1 January 1962. 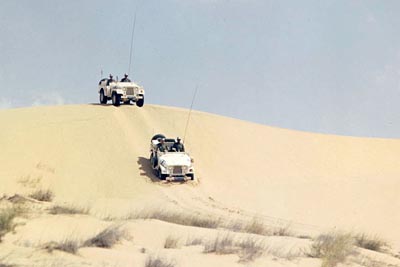 Royal Canadian Dragoons are also seen on a UNEF patrol in the Sinai in this picture (which had been scanned backwards at Library and Archives Canada.) 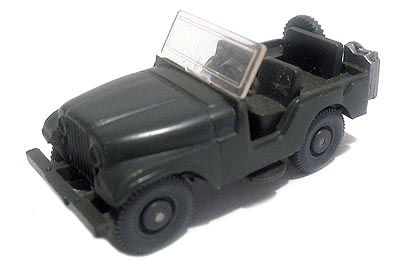 Probably the most common version of the Wiking HO-scale CJ-5 over the years was the olive drab military version, which I believe was produced as early as the late 1960s. It's about 1-1/2 inches (40mm) long. See also a civilian version in HO Scale Jeeps on CJ3B.info. 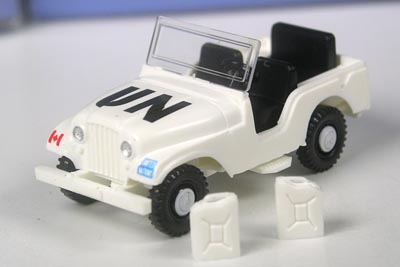 The 2014 UN commemorative edition was the idea of Frank Drews who organized it through the website Collect-and-Invest which sells the exclusive model in Europe. 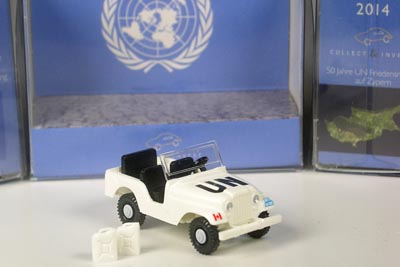 As well as the white paint so recognizeable around the world as representing UN peacekeeping, the model carries the Canadian flag that has appeared on many of the white Jeeps over the past half-century. The "UN" stencilled in black on the hood is not actually typical of the Canadian Jeeps in Cyprus, but is common on other UN peacekeeping Jeeps (see UN Jeeps in Lebanon on CJ3B.info for example.) The blue packaging makes a nice display platform for the model. 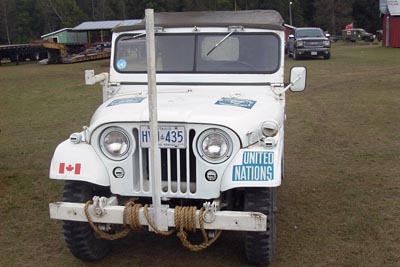 At least one of the original white M38A1 CDN's survives. This Jeep belongs to the Ontario Regiment (RCAC) Regimental Museum in Oshawa ON, which also has a UN-white Ferret.

See also a close view of the left front (200K JPEG), showing the fender-mounted marker lights installed for Cyprus, and the wire-cutting post attached to the bumper in recognition of the continuing dangerous situation on the island. 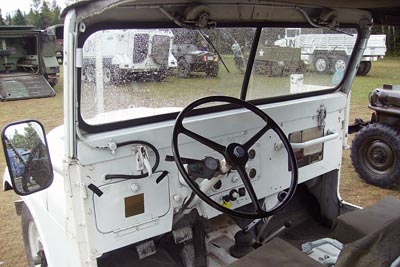 A shot of the well-preserved interior of the Jeep also shows other white-painted UN vehicles in the background. Jarek Skonieczny took these pictures in 2010.

See also a registery of M38A1 CDN photos at RamTank.ca.

Thanks to Jarek Skonieczny for the photos, and to Frank Drews for his efforts in getting the unique Wiking model produced in recognition of the peacekeepers. -- Derek Redmond