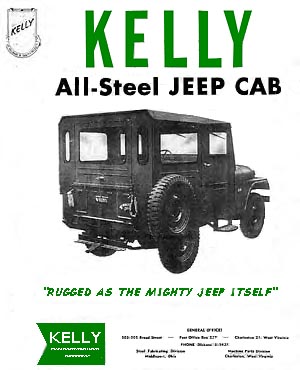 The Kelly Manufacturing Co. of Charleston, West Virginia was an interesting alternative to the other major hardtop manufacturers. This brochure (right) shows their cabs on a CJ-5, but they were made for all Universal Jeeps.

Mike Kelly, who as of 2009 was the sole living Kelly heir who had been involved in the family business, told CJ3B.info, "The Charleston plant was originally Hubert Kelly Motor Company, and sold Pierce Arrow, Hupmobile, Studebaker and later, surplus military Jeeps and Willys. Prior to that, my great grandfather owned and operated Kelly Livery in Charleston, around the turn of the century.

"At first, surplus Jeep sales were slow with power and utility companies being the most frequent customers. The advent of steel cabs made the 'mighty Jeep' more attractive to sportsmen and farmers. Willys brought about broader marketing schemes, and the rest is history. We had a close working relationship with Warren Industries and Kayline, selling and distributing both product lines."

Kelly's move into hardtops came in the latter part of 1951, when Mike's grandfather Hubert A. Kelly purchased D. L. Beck Mfg. of Middleport, Ohio, who had been manufacturing Jeep cabs for the CJ-2A and 3A. Mike told CJ3B.info that "The Middleport plant continued to fabricate steel cabs for the military, CJ and Jeepster series of vehicles, up to the CJ-7 model, as well as other lines of non-related steel products. The Kelly facility in Charleston produced machined items including locking hubs for Jeeps and International vehicles, and served as the distribution facility which shipped cabs to Jeep dealers."

With its aggressive angularity, the Beck/Kelly design is perhaps the most "military" looking of the civilian tops. Mike Kelly explains, "The angular roof line was to mate the wider body section of the cab to the narrower Jeep windshield and was a Beck design. That roof design was later updated when we came out with a cab for the CJ-5 which had a radius on the sides and back of the roof. Filler panels called 'wings' were attached to either side of the windshield to make up the difference in windshield and body widths."

The 300-series claimed the largest glass area of any hardtop. All Kelly hardtops were fully insulated, had roll-down windows and were made with 18-gauge steel. The 45-degree angle from the side to the top, and the interesting folding of metal above the doors, was definitive of a Kelly or Beck-made top, very different than other major top makers.

Kelly continued to use Beck's term "Custom" for its 300 series, and "Deluxe" for its 200 series with a little less window glass. There was no "budget" model sold under the Kelly name. Although Kelly advertised its cabs as "RUGGED AS THE MIGHTY JEEP ITSELF" it made no claims to having an inside track to Willys-Overland, as did some other manufacturers. 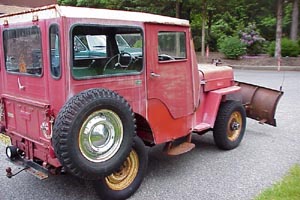 A nice example of the Custom 300 full cab is seen on this 1962 CJ-3B owned by John Belden. The huge window area makes this a cab with very few blind spots. Perhaps because of the strength of steel, Kelly was able to put fairly large roll-down windows in the doors. After a new paint job John's 3B and Kelly cab are a very attractive combination. 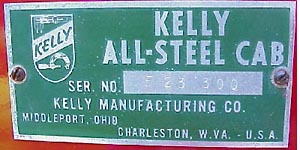 The Kelly identification tag is located just behind the passenger side door, the same location as on a Koenig top. 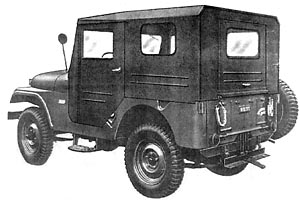 This illustration of the Kelly Deluxe Full Cab clearly shows the strengthening ribs on the body panels. The 45-degree angle where the side meets the roof and the sharp angles on the door are also Kelly signatures. It is not unusual to find a Kelly cab missing the two ribs on the doors, probably from the period when Beck was first sold to Kelly. 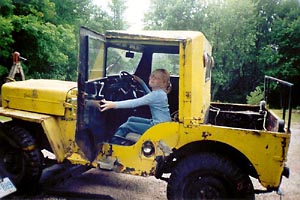 Craig Godfrey's 53 3B is seen with its Kelly half cab. The door is a Kelly, though we can't see if it has ribs on its exterior. Kelly is one of the few cabs to have cranked windows. The rear corners on this half cab are inconsistent with the brochure illustration and some awkward workmanship at its bottom rear corner would suggest that this was a Kelly full cab modified to become a half cab. The folding of the sheet metal roof above the door is unique to Kelly made cabs. 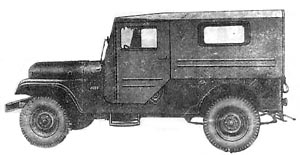 The Kelly CJ-6 Deluxe Full Cab is perhaps the only cab to be specially designed for the longer tub, rather than just a standard full top with an extender unit which goes between the half cab and the full cab (as on the Koenig and the Meyer CJ-6 cabs.)

Mike Kelly adds, "The later CJ-5 cabs had a third model which we called the Bonanza. It was similar to the 300 but featured debossed panels on the sides with wood grain decals. All models except the Bonanza were available in half cab versions but for varying lengths of time."
In summary, Kelly cabs stand up well when compared to other high-end cabs. They are simple, yet serious looking, much like the Jeep itself.In their advertising Kelly stressed that their cabs had the lowest prices in their class. One likely reason is that they did not require expensive stamping dies and machinery, but were made by simply cutting, folding and welding the sheet metal. Only the ribs were stamped into the sheet metal.

Continue to Worman Jee-Cabs or return to the Table of Contents.

Thanks to John Belden and Craig Godfrey for photos, and Karl Russell for scanning the brochure. Also Bart McNeil for his research, and Mike Kelly for helping us preserve the story of his family firm. -- Derek Redmond

See also the Beck/Kemco article for examples of those earlier versions of the Kelly hardtop.

Last updated 10 May 2009 by Derek Redmond redmond@cj3b.info
https://cj3b.info/Hardtops/Kelly.html
All content not credited and previously copyright, is copyright Derek Redmond