Katanga was one of six provinces of the Belgian Congo (see the Congo map) and was by far the richest one: there was "an embarrassment of riches" in different minerals, to quote one writer. When the Congo was thrown into chaos in July 1960, immediately after independence, local politicians (with some Belgian encouragement) immediately declared Katanga an independent state within a confederated Congo.

Over the next two and a half years there was continuous political manoeuvring to reintegrate Katanga with the Congo, and Katanga at various times fought the central government, an internal rebellion and the ONUC forces. The Katangan military forces were rebuilt from scratch in 1960, continued to be led by Belgians to begin with and also made extensive use of mercenaries.

There was a second secessionist state known as South Kasai, which was rich in diamonds. They also built a new army but preferred Land Rovers rather than Jeeps.

Katanga housed a couple of sizeable garrisons of the Congolese army and was therefore able to immediately take over some of the equipment left by the Belgians, even if almost all the existing soldiers were dismissed. The vehicles included the usual assortment of Jeeps used by Force Publique in colonial days and also additional equipment handed over by the regular Belgian army forces when they were forced to leave the Congo soon afterwards.

For political reasons, the new Katangese army was officially called a gendarmerie, i.e. a military force intended for internal police duties. Its equipment and tactics was largely based on the old colonial forces, except that it was much better motorized. 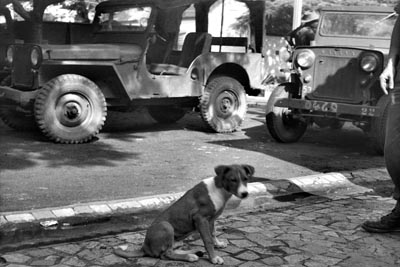 Gone to the dogs? This pair of scrounged colonial Jeeps in the weeks following the secession included a CJ-3B on the right, with a 1953 service date marked on it, and a CJ-3A. Both have the chaff screen over the grill, commonly seen in the Congo. The new Katangese military registration of the 3B has been sloppily applied on the bumper. At this point the Katangese forces were not picky and were happy to take over any vehicles that moved, although the poorer examples were mainly used on garrison duties. (Photo © Pierre Promil) 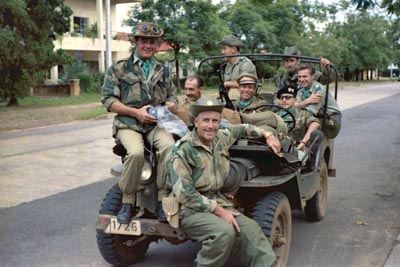 One of the few color photos to have emerged from the early days of Katanga shows a group of Belgian volunteers using a CJ-3A as a run-about in the Katangese capital Elisabethville. Unusually, the Jeep has the top bows in place. Some of the men were on official assignment from the Belgian Army while others were mercenaries. The bluish green scarf became an attribute of the members of the Mobile Groups, which were the main users of Jeeps in the Katangan forces. (Photo © Pierre Promil)

President Tshombe of Katanga and his fellow politicians in their capital Elisabethville had ridden roughshod over some opponents when forming their new government, and the Baluba people in northern Katanga had been given particularly short shrift. A large portion of the Baluba therefore rebelled and the new Katangese military forces were immediately sent in to restore peace.

Among the first new units created by Katanga were some Mobile Groups (known as "GM", after the French initials), intended to move quickly and have good firepower. The mainstay of the GMs were Jeeps, or Minervas (Belgian-built Land Rovers), fitted with machine guns but otherwise initially in more or less stock configuration. 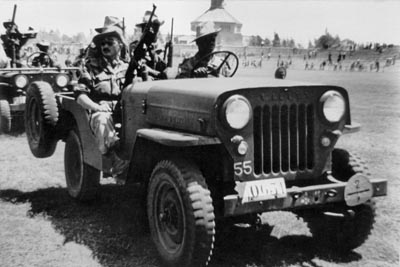 Groupe Mobile "B" was the first of the new Katangese mobile groups and was commanded by Captain Tchen. He is seated in the lead Jeep of this column, a CJ-3B fitted with a Browning Automatic Rifle (BAR). Behind it is an older Jeep, with a .30-calibre machine gun. Both Jeeps are ex Force Publique, as can be seen from the L-shaped additional indicators on the front (see Part 1). (Photo via J-P Sonck) 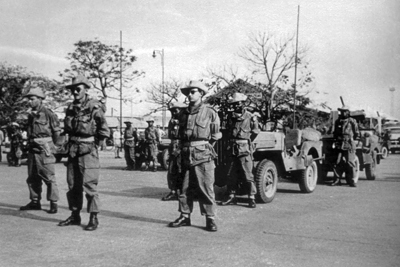 Tchen's GM "B" on parade in late September, after its first operations. At this time, and indeed for the first year or so, virtually all officers and senior NCOs were white. The soldiers are all wearing Belgian uniforms and the Belgian style of bush hat that was a hallmark of the Katangese forces. In addition to anything from half-a-dozen to a dozen assorted Jeeps or Minervas, each group also had a few Chevrolet trucks -- here glimpsed on the far right. Note the particular Congolese way of fitting the shovel on the side of the Jeeps. (Photo via J-P Sonck) 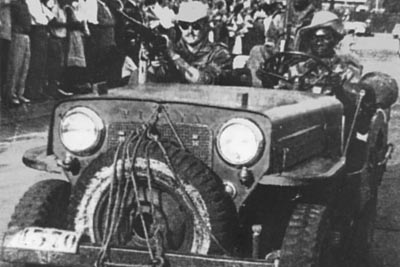 Another early CJ-3B, again with a BAR gun and without a windshield. The typical Force Publique indicators are present although this time mounted vertically. The Jeep has no blackout light and is in all likelihood from the assembly line in Belgium in the 1950s. The spare wheel -- with its typical FP whitewall for parades -- rather inelegantly strapped to the front was probably not good for the airflow to the radiator in the warm climate. The eyelets screwed into the front bumper was a feature seen on a number of Katangese Jeeps. (Photo via J-P Sonck) 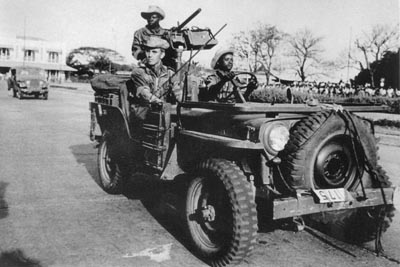 This CJ-3A is fitted with a radio rack of the type favoured by the Belgians in the Congo. The radio appears to be an American AN/PRC-10 with a short antenna. Behind the lead vehicle is a CJ-6, likely one of the few such newer Jeeps inherited from the Force Publique. (Photo via J-P Sonck) 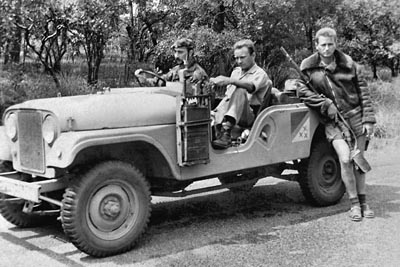 The first new Jeeps obtained by Katanga were a small batch of sand-coloured, right-hand drive CJ-6s bought in Rhodesia within weeks of the secession and these arrived in time to take part in some of the early operations. This one has been fitted with a radio rack but on the left rather than the normal right-hand side, to be within easy reach of the front seat passenger. The man leaning against the side, near the large Katangese flag, carries a pou-pou, an old-fashioned muzzle-loaded hunting rifle common in the Congo -- no doubt confiscated from the Baluba. (Photo via J-P Sonck)

The initial operations against the Baluba came to an end in October 1960, when the United Nations took over the responsibility for the peace-keeping within Katanga and its ONUC troops enforced a number of neutral zones where no other armed parties were allowed.

The equipment taken over at secession did not go very far, especially as the Katangese forces were quickly built up to a strength far greater than in colonial days. The existing Jeeps had also been further decimated by the rigours of the initial military operations. Katanga stayed true to Willys, however, and the Jeep continued to be the most common vehicle in the field units of the new army. The Katangese decided to use the CJ-6 as standard, thereby continuing the trend started by the Force Publique before independence. By the end of the year, Katanga had four mobile groups plus various infantry and support units.

The peace imposed by ONUC did not last long, since Katanga felt that the UN was not very impartial in enforcing the neutral zones. In early 1961, the campaign against the Baluba was therefore renewed. 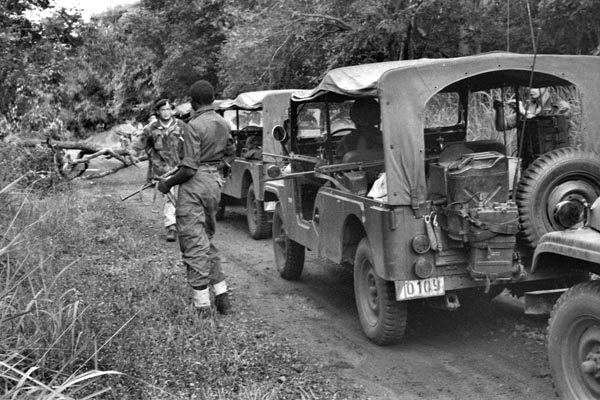 Operation Banquise ("Ice Floe") in February 1961 was the first in a series of offensives carried out in central and northern Katanga. By this time the CJ-6 had largely replaced the older models in service, as in this column halted by a tree felled across the road: a favourite Baluba tactic. The new Katangese CJ-6s usually had large, red, non-standard indicator lights on the front fenders and at the rear, just like the ONUC CJ-6s. At the rear is an external storage bin of the type common in the Congo. The Jeep in the middle has not one but two radio sets -- one of them rather carelessly strapped to the jerry can at the rear. (Photo © Pierre Promil) 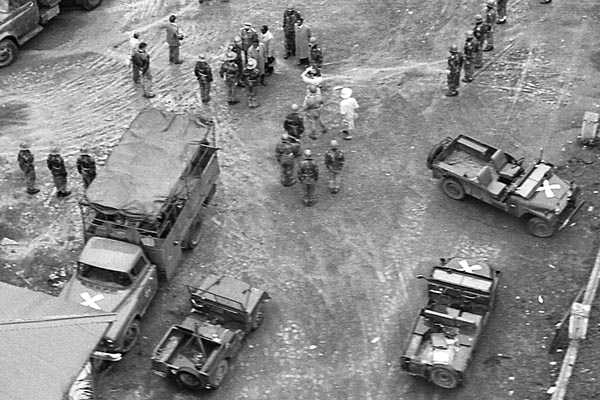 This aerial shot was taken during a visit by President Tshombe (top center) to the front in March 1961. The white Katanga cross often painted on the hoods for identification can be seen clearly. Note also that the two CJ-6s on the right have different seating arrangements and that neither is armed: except for its armored Jeeps (see Part 4) the Katangese did not usually fit machine guns to their CJ-6s -- but there were exceptions. At bottom center is a Minerva TT; a Belgian Land Rover that was common in the Congo. (Photo © Terence Spencer) 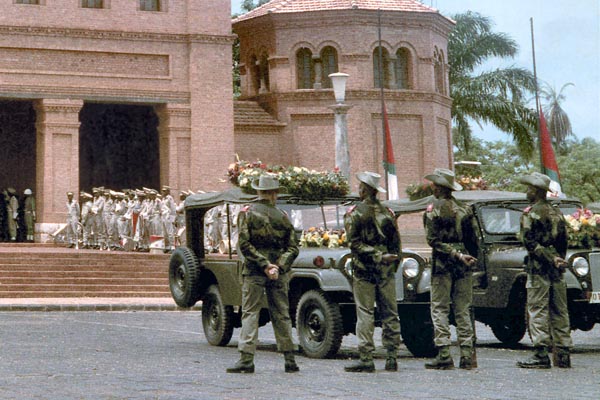 The CJ-6 was also used on various second line duties. Three Katangese soldiers with their white officer are waiting outside the Catholic cathedral in Elisabethville during a military funeral service in 1961. Their CJ-6s are doing service as hearses and are bedecked with flowers. A Katangese military band also waits in the background. (Photo © Pierre Promil) 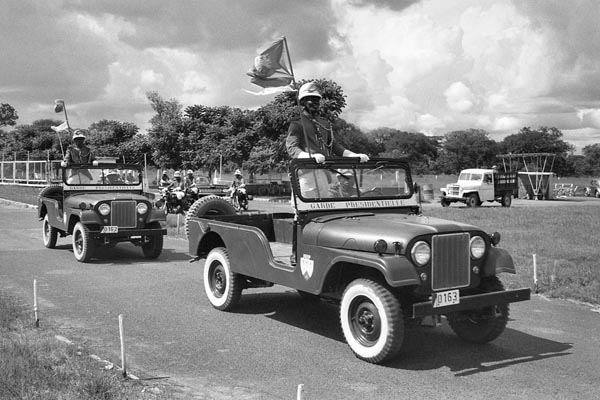 The Katangese Presidential Guard received a whole fleet of CJ-6s, which rarely left the capital Elisabethville (see the Congo map). Most of them were mainly used on ceremonial duties. These in 1961 have had their passenger seats removed to allow a soldier to stand up during parades. They did of course have whitewalls and were kept nice and shiny. The guards themselves had very fanciful and colourful uniforms based on 19th century European styles. In the background is an ONUC Jeep stake truck, with its crew watching the spectacle.

The presidential limousine glimpsed in the background above can be seen in a separate photo (220K JPEG). To the right is President Tshombe of Katanga and to the left President Kalonji of South Kasai. The car is a 1959 Chevrolet Impala Sedan. (Both photos © Terence Spencer)

The Veterans Struggle On

The influx of new CJ-6s did not mean that the older versions were completely retired. The Katangese were quite pragmatic in this respect and any Jeep that still worked would be kept in service until it gave up the ghost. The odd CJ-3B would therefore continue to be seen in Katanga. 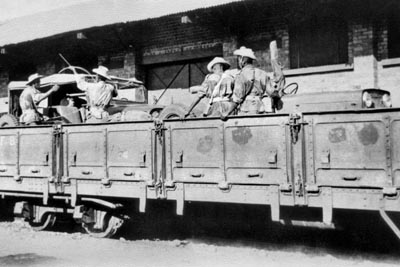 The road network in the Congo was very poor, even if it was perhaps better in Katanga than in most other parts of the country. It was therefore common to use river or rail transport when moving longer distances and this practice was also followed by the Katangese gendarmerie. These soldiers are loading a CJ-3B (with its machine gun shrouded) and a CJ-6 on a freight car for relocation up-country. The crews commonly stayed with their vehicles during the journey. (Photo via J-P Sonck) 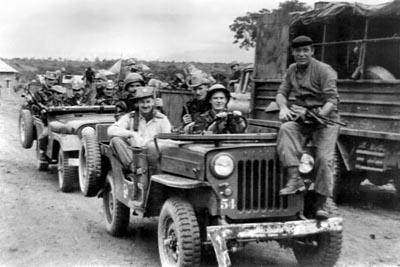 During early 1961 there were still some CJ-3Bs in the front-line and this unarmed example -- unusually still with a windshield -- was used by Colonel Crevecoeur, commander of the gendarmerie, as his command vehicle. Seated on the hood is "Le Mousse", one of the more well-known mercenaries in Katanga during this period. (Photo via Guy Devresse) 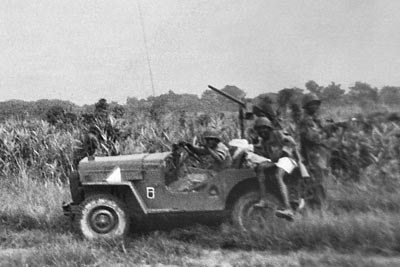 This is another CJ-3B in use during Operation Banquise in February 1961, fitted with a .30-calibre Browning machine gun and carrying its spare wheel on the front. The Jeep has a large red, green and white Katangese flag painted on the hood, a practice that was not common. The small badge behind the fender is an old Force Publique formation sign.

A second view of the same Jeep (120K JPEG) shows some details of the gun installation and also the top of the usual storage bin at the rear. (Both photos via J-P Sonck)

The CJ-3Bs in Katanga would have a last moment in the limelight during the latter part of 1961, when Katanga was fighting the United Nations (see Part 5).

Continue to Part 4: Katangese Armored Jeeps, or return to the Table of Contents.